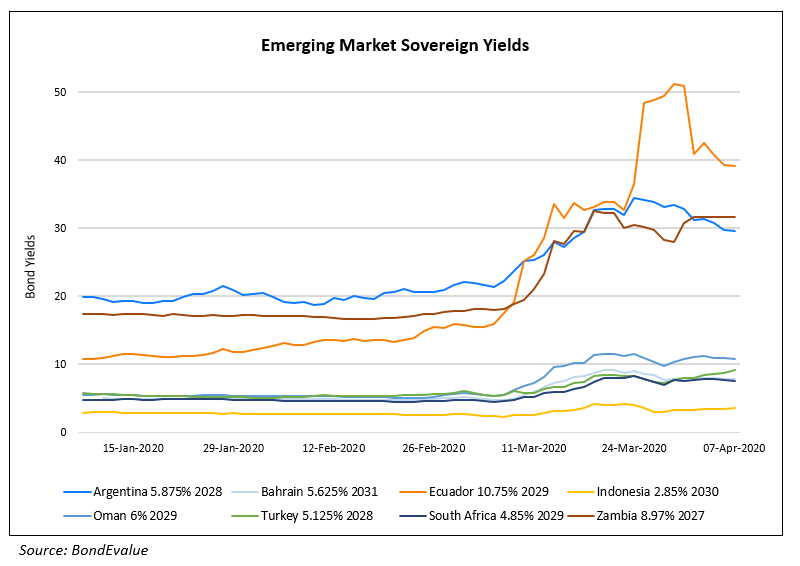 A risk-on move that started on Monday morning turned out to be a strong rally by the end of the day as investors were encouraged by a continued easing in death numbers in some of the virus hotspots around the world. The S&P 500 ended the day up 7% and the 10-year US treasury sold off with yields rising by 6bps. European shares were also higher as the DAX climbed 5.7% while the FTSE 100 rose 3%. US investment grade CDS spread narrowed by 10bps to 119.5bps and Asia ex-Japan investment grade CDS spread also narrowed by 7bps to 142bps. Asian markets are opening between 1%-2% higher while US index futures are down around 0.5%. Corporate bond issuance continue to stay busy in the U.S with around $20bn in high grade issues. Moving east, Indonesia raised $4.3bn via a three-tranche issuance, the largest dollar deal by an Asian issuer in 2020.

The rating action on Car Inc. follows the 2 April 2020 announcement by Luckin Coffee Inc. on an internal investigation into misconduct, including fabricated transactions. The chairman of Luckin Coffee’s board of directors, Charles Zhengyao Lu, is also the chairman of the board of CAR.

S&P Global Ratings lowered its outlook on Brazil’s sovereign debt to “stable” on Monday, citing huge government spending to soften the economic blow from the coronavirus, but said a credit rating upgrade is still more likely than a downgrade.

The rating action on UAE-headquartered ports and logistics operator DP World PLC by Fitch reflects their expectation that DP World’s credit profile and metrics will be affected by a severe but relatively short-lived demand shock due to the coronavirus pandemic.

The oil-price war hasn’t done any favors for Saudi Aramco’s bond holders. Aramco’s $3bn of bonds due 2029 now trade with a higher yield than the government’s debt of similar maturity. A year ago when the energy giant issued the Eurobond, the notes were priced with a lower yield than the government itself which is a rare occurrence in the corporate bond market. “It’s been, for the market, a reality check,” said Willem Visser, a T. Rowe fixed-income analyst. “Aramco tries to project itself as being a triple-A rated credit that’s bigger and better than the other oil majors, but people forget about the political risk.” 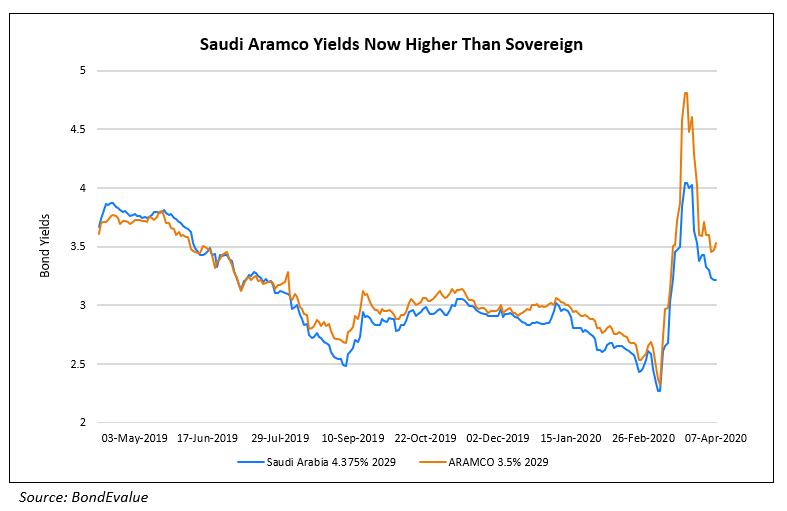 As demand for government bonds decline, Indonesia will raise Rp 450tn in pandemic bonds to finance the efforts to combat the coronavirus. The government will also increase its bond sales target by Rp 160.2tn to Rp 549.6tn to help with the widening budget deficit which is 5.07% of GDP. After an exit of foreign investors from the bond market, the 10-year benchmark bond was yielding 8.17%. The new Government Regulation in Lieu of Law No. 1/2020 issued last week, allows Bank Indonesia (BI) to buy government bonds at auction. This regulation revokes a 1999 law which only allowed BI to buy government bonds in the secondary market. 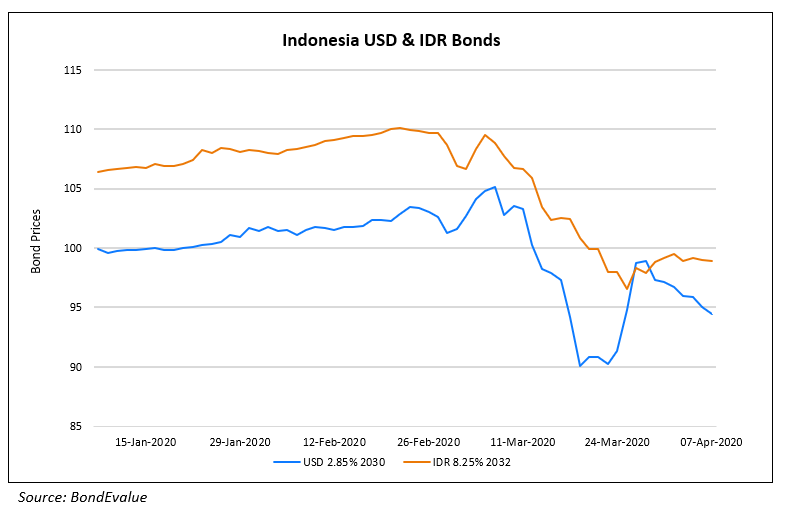 EM Economies Likely to Grapple with Their Dollar Debt Obligations

As global investors went on the hunt for yield, eurobond markets opened to dozens of poorer countries that did not have access to the debt markets earlier and this resulted in a borrowing binge. “The impact of global measures to contain the coronavirus will result in a steep fall in [emerging markets’] gross domestic product this year and the collapse in output, spike in capital outflows and plunge in commodity prices could trigger balance sheet problems that make the downturn much worse and the recovery slower,” said William Jackson, chief emerging markets economist at Capital Economics. “It’s not altogether that surprising given that many of these countries have quite small domestic financial sectors so it’s much harder to raise debt domestically and many of these countries have had high current account deficits for some time,” Mr Jackson said. 85 countries have approached the IMF for short term emergency assistance. Some have already secured other arrangements. Fiji is negotiating a loan from the Asian Development Bank, Sri Lanka secured $500mn from the China Development Bank, Montenegro has a guarantee from the World Bank and Bahrain is expected to be bailed out by Saudi Arabia if it needs help. 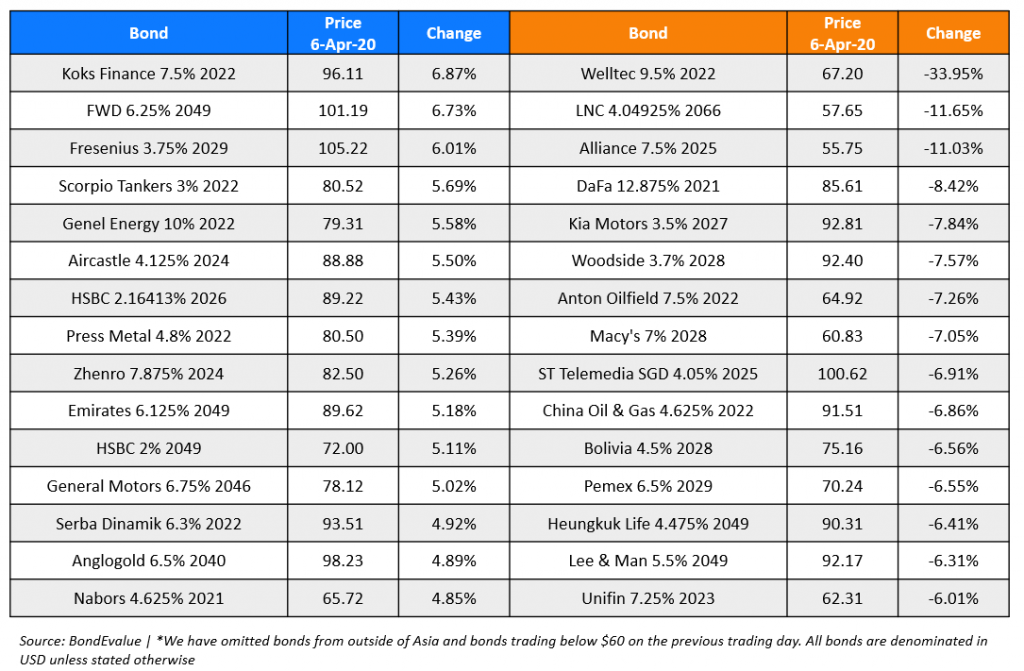 Trading volumes through Bond Connect were up 67.7% from the previous month and totalled a record 478.2bn yuan ($67.5bn) in March, data from Bond Connect Company showed. Trading tickets totaled 5,007, also a record, up from 3,608 in February. Foreign investors have steadily increased their investments in onshore Chinese bonds over the past year. But recently, market sources have seen some net selling of Chinese government and policy bank bonds in recent weeks as a global financial panic, sparked by the coronavirus pandemic, led to a rush for dollar liquidity.

Chinese businesses defaulted on less than 24bn yuan ($3bn) in corporate bonds during the first quarter, down nearly 30% on the year, as the government pressed banks to pour on support in response to the coronavirus epidemic. China’s banking authorities have told banks to offer loan deferments to small, midsize and microenterprises. But provincial governments appear to have pushed banks to prop up major government-owned enterprises in their areas as well.