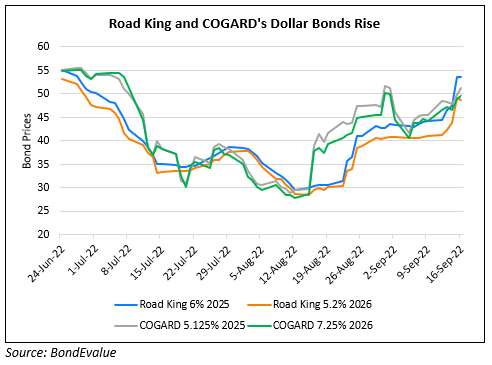 Dollar bonds of Chinese property developers Road King and Country Garden rallied 5-10% yesterday. SCMP reported that  local authorities had rolled out incentives and stimulus measures to spur home sales. Suzhou’s local authorities said they would remove the restrictions on non-local residents who want to buy their first homes in Jiangsu. Similarly, in Guangdong, the government lifted a price ceiling wherein developers can now raise home prices by 10%, from the previous limit of 6%. These positive updates come after China’s government and local authorities put a large number of regulations in 2017 to contain a possible property market bubble from collapsing – this included price caps, mortgage limits, and other restrictions on developers. As per real estate broker CRIC, in August alone, around 75 stimulus policies were rolled out by multiple cities to support the property market. These included lower down payments, subsidies on buying homes, easing in bidding rules for land sales and relaxing rules on using housing provident funds amongst others.