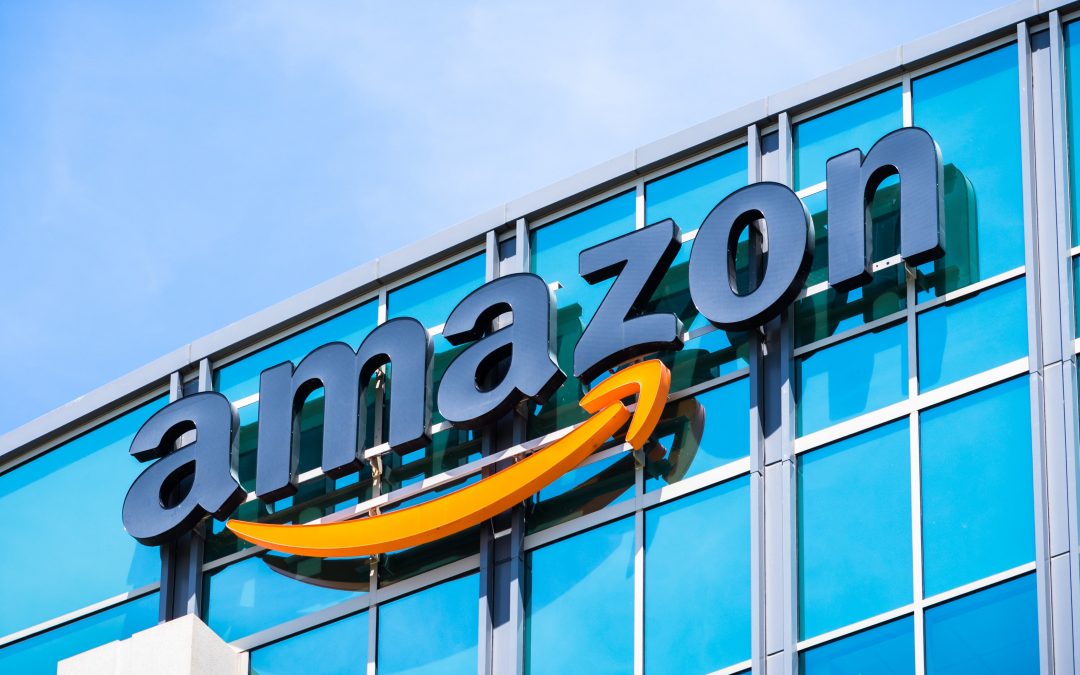 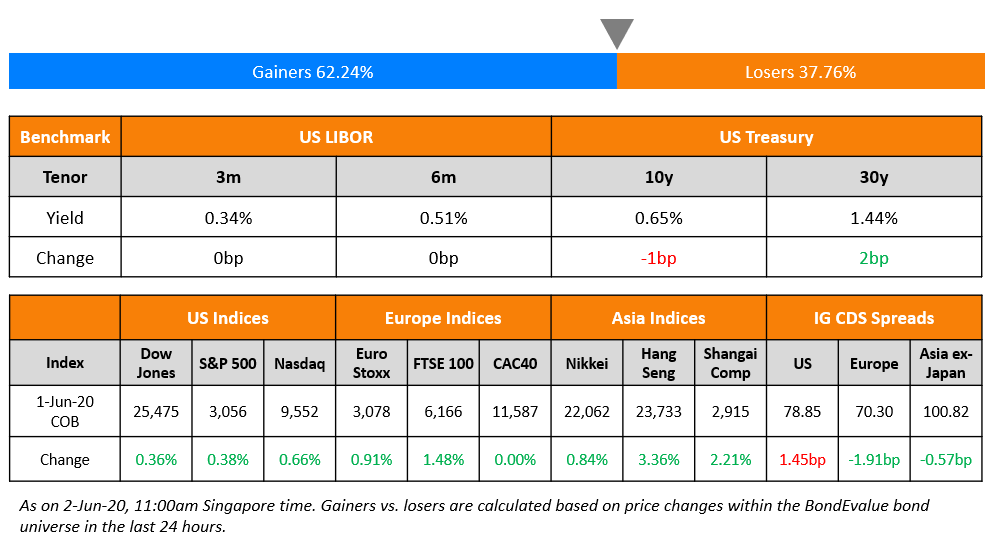 Markets seem slightly more risk-on this week despite so many variables in play with recovery hopes outweighing everything else. On the up side, we saw an uptick in May ISM numbers alongside improving new orders and employment indices which showed that lifting lockdown restrictions should help with a recovery. On the down side, Friday’s NFP is expected to be a painful number, Trump warned that he would deploy troops to quell the protests in the US, and new US-China tensions arise as Beijing orders state owned firms to stop purchase of US soybeans and pork. European CDS spreads narrowed but US IG CDS spreads widened just a bit. US and European markets closed higher yesterday and Asian markets are opening with a similar tone this morning but US index futures are down 0.5%. 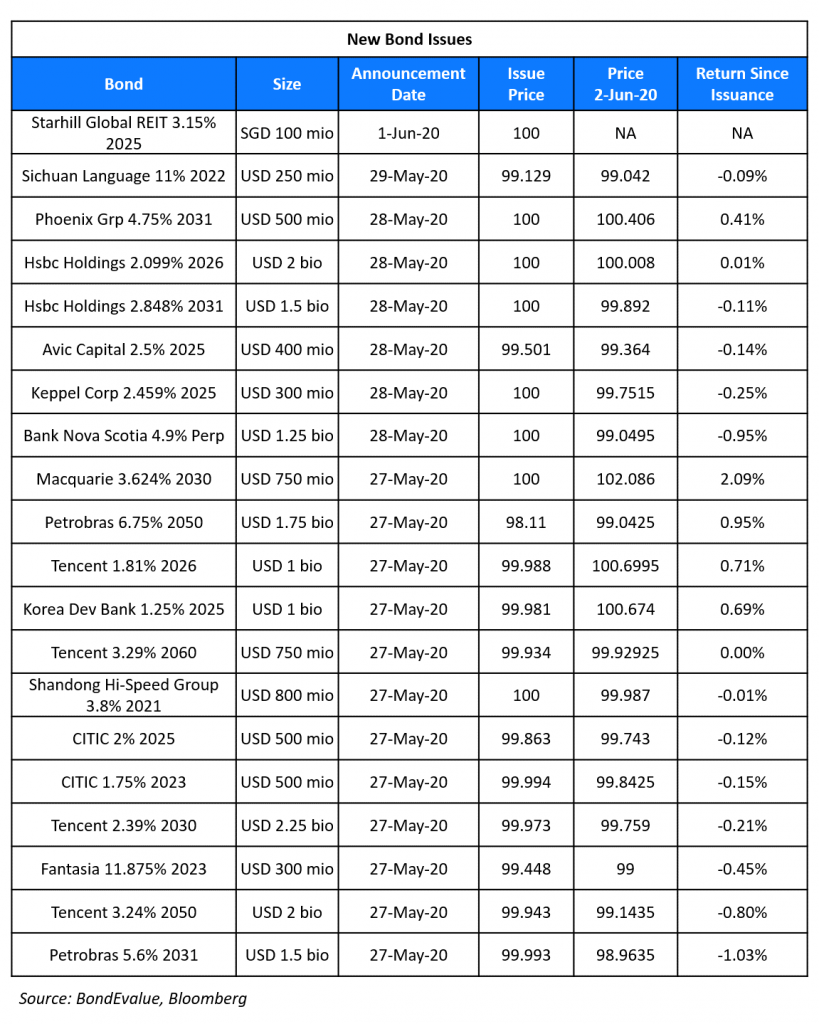 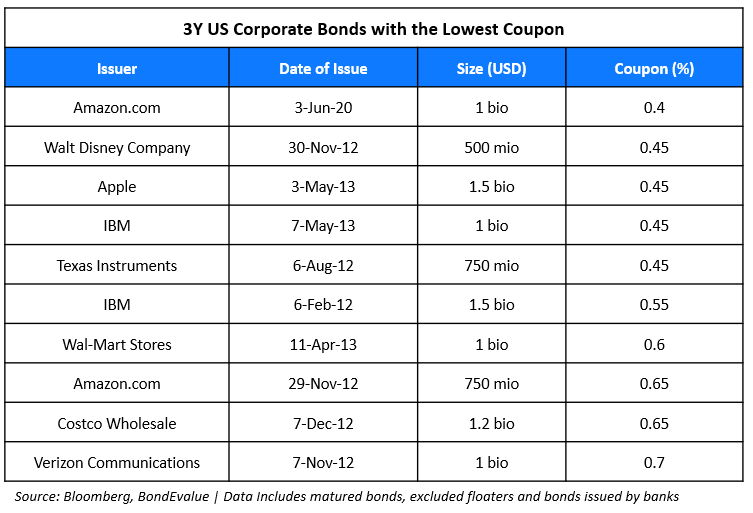 The $1bn 3Y bond was priced at a spread of 25bp over Treasuries, and 15bp inside initial guidance of T+40bp area. Amazon last issued a 3Y bond in 2017 at a coupon of 1.9% to fund its acquisition of Whole Foods. Here is are details of all tranches of the new bond issue.

Moody’s downgraded India’s sovereign rating from Baa2 to Baa3. Although Moody’s rated the country as investment grade for now, it maintained a negative outlook which is reflective of downside risks due to the existing stresses in the economy. The downgrade comes at a time when India is trying to re-open its economy post an almost two-month lockdown in a phased manner. While the country’s local-currency senior unsecured debt was downgraded to Baa3, its short-term local currency rating was downgraded from P-2 to P-3. The short term foreign currency bank deposit ceiling was lowered by a notch to Prime-3 while the bond ceiling remained at Prime-2. The long term currency bond and back deposit ceiling were lowered to A2 from A1. The downgrade comes after Moody’s had upgraded India in November 2017, and is inline with ratings of S&P and Fitch.

According to the rating agency, the implementation of reforms over the period since its last upgrade has been weak and the ongoing pandemic has fueled the downgrade. Moody’s predicts a prolonged period of reduced growth, which is likely to add to the country’s debt and pose challenges to the country’s policy making. Despite the downgrade, there has been little movement in dollar bonds of state-owned Exim bank, PFC and REC reflecting the market sentiment on the downgrade.

Fitch Downgrades Cemex and Elementia to BB- with a Negative Outlook

Fitch ratings downgraded Mexican cement manufacturer Cemex’s foreign and local currency Issuer Default Rating (IDR) to BB- from BB with a negative outlook. Fitch also downgraded another Mexican construction raw material manufacturer, Elementia’s foreign and local currency IDR to BB- from BB. The rating agency removed Elementia’s Rating Watch Negative and assigned a negative outlook. The rating agency said that both companies’ capital structure will weaken beyond its rating sensitivities for a sustained period, driven by lower demand for cement in Mexico and the US on the back of a slowdown in construction activity, given the economic contraction in both economies. While the negative outlook on Cemex is because it expects the slowdown in construction activity to continue through 2021, the negative outlook on Elementia reflects the company’s high leverage and increased uncertainty about the degree and timing of a recovery. Fitch’s base case projections factor in the successful sale of Elementia’s Keystone plant. 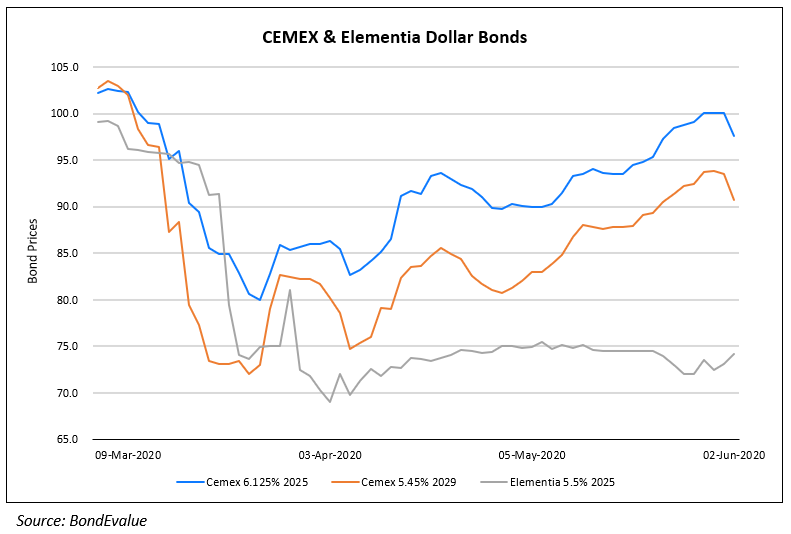 American investment firm Elliott Management is getting closer to taking control over Hong Kond-based Bank of East Asia (BEA). Elliott and BEA have been battling for control for six years since Elliott bought a stake in the family-run bank in 2014. Both sides announced in March a strategic review of the bank’s assets to be conducted by Goldman Sachs. According to a Financial Times story, the strategic review has led to early discussions with financial and strategic investors about the sale of the BEA’s Hong Kong and China banking businesses. The sale of these banking units would be considered a victory for Elliott as it has claimed that BEA has been poorly managed over the recent years. The Li family owns 7% of BEA but has managed to keep control of the bank via a complex family holding structure. Elliott owns ~8%, Japan’s SMBC owns 17.5% and Spain’s Caixa owns 16% in BEA. BEA’s recently issued 4% bonds due 2030 are currently trading at 99.45, down ~2 points from 102.12 after listing on the secondary markets on May 22. Its 5.5% perp with call date on Dec 2 this year is down ~1 point since last week to trade at 98.5.

Argentina Extends Deadline to Restructure; IMF Sees Little Scope for The Govt to Up Its Offer

After having missed its May 22 deadline for interest payment extension due to an elongated recession and currency plunge, the Argentinian government wants to avoid a repeat of the 2001 default crisis by making efforts to restructure its approximately $65 billion bonds. As of March, the country needed between $55 billion to $85 billion to turn around the economy. While the government had sent a revised offer to its creditors on May 26, the creditors have sent a counteroffer to provide $36 billion cash flow relief. The IMF estimates a difference of 1.5% between the two offers over a period of 20 years and sees room for negotiations. Argentina has extended the deadline to negotiate with its creditors to June 12.

Although the IMF supports the government’s restructuring proposal, it saw limited scope to increase the payments to the creditors while meeting the debt and debt service thresholds, reported Bloomberg. In 2018, the IMF had granted a $56 billion bailout package to the country which failed to turn around the Argentinian economy, thus making it an important stakeholder.

Credit Spread refers to the difference in yield or return between two debt instruments with same maturity but different credit quality (rating). An example: If the 10Y US Treasury has a yield of 1% and a 10Y USD corporate bond has a yield of 2.5%, the corporate bond is said to have a credit spread of 1.5% or 150 basis points.

This term is in relation to the Amazon story above, where its new 3Y bond has a credit spread of just 25 basis points or 0.25% over 3Y Treasuries.

On the India rating downgrade – Ashish Vaidya, head of trading at DBS Bank Ltd.
“This is definitely not welcome news and we could see some more foreign outflows. There will be a knee-jerk selloff in the rupee and bonds but we expect the RBI to jump in to curb any bouts of undue volatility.” 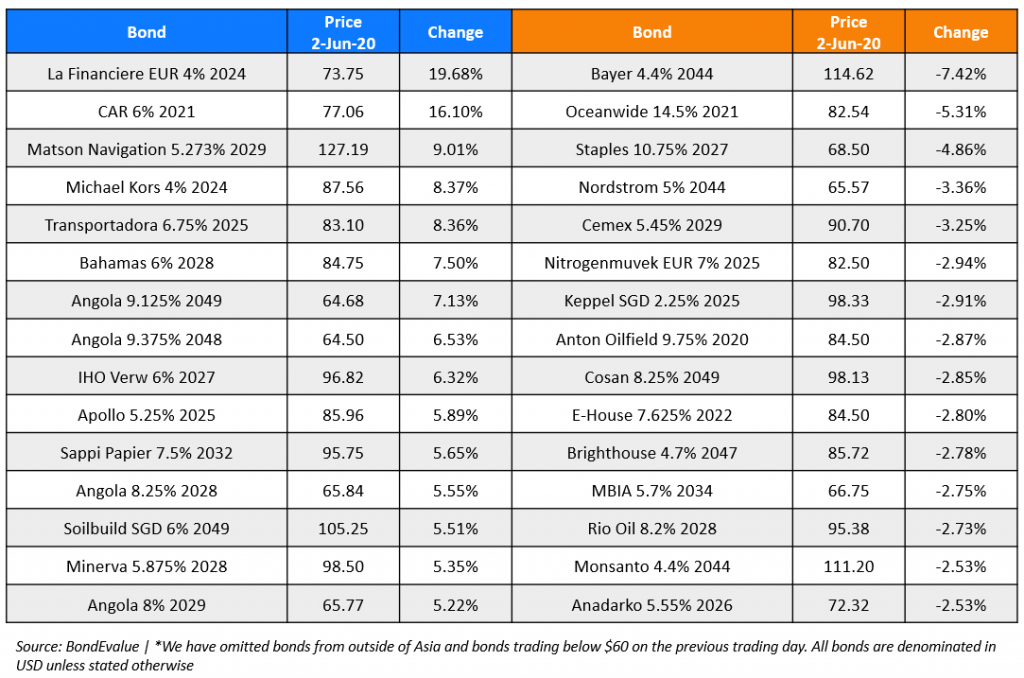