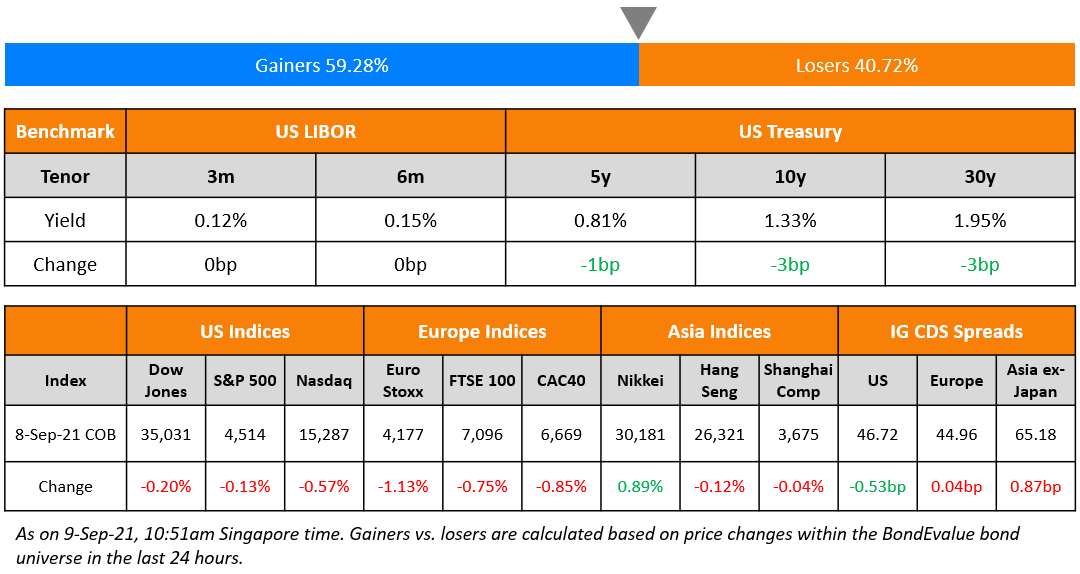 US markets ended weaker on Wednesday – S&P was down 0.1% extending its fall for a third straight day and while NASDAQ lost 0.6%. Utilities up 1.8% and Consumer Staples and Real Estate up more than 0.5% moved the markets up while Energy and Materials down more than 1% dragged them lower. European stocks also closed lower, extending the week’s losses – DAX, CAC and FTSE were down 1.5%, 0.9% and 0.8% respectively. Brazil’s Bovespa tumbled 3.8% a day after the independence day holiday. Saudi’s TASI and UAE’s ADX were up 0.4% and 0.7% respectively. Asian markets took a cue from the US markets and have started in the red during early trade – HSI down 0.9% led the losses,  and Nikkei, Shanghai and Singapore’s STI followed with losses of 0.4%, 0.3% and 0.2% respectively. US 10Y Treasury yields fell 4bp to 1.33%. US IG and HY CDX spreads tightened 0.5bp and 2.8bp respectively. EU Main CDS spreads were broadly flat and Crossover CDS spreads widened slightly by 0.4bp. Asia ex-Japan CDS spreads widened 0.9bp. Wednesday saw another busy day for the primary markets with 54 new USD/EUR bond deals following Tuesday’s 62 new bond deals.

SMC Global Power raised $150mn via a tap of 5.45% PerpNC5 at a price of 100.125 (yield of 5.42%), inside the initial guidance of 100 area. The bonds are unrated, and received orders over $375mn, 2.5x issue size. Proceeds will be used for investments in a power plant and related assets or for general corporate purposes. There is a coupon step-up of 250bp on December 9, 2026 as well as a dividend pusher and stopper. Philippine conglomerate San Miguel wholly owns SMC Global Power, which generates electricity from natural gas, coal and renewable energy such as hydroelectric power, and is also engaged in distribution and retail electricity services. The 5.45% Perps are currently trading at 100.55 yielding 5.33%.

“It could be appropriate…Assuming the economy continues to improve as I anticipate, it could be appropriate to start reducing the pace of asset purchases this year…I will be carefully assessing the incoming data on the labor market and what it means for the economic outlook, as well as assessing risks such as the effects of the delta variant…I think it’s clear that we have made substantial further progress on achieving our inflation goal. There has also been very good progress toward maximum employment, but I will want to see more improvement before I am ready to declare the test of substantial further progress being met.”

On Bond Traders Betting Lagarde Will Tread Carefully in Signaling Taper – Imogen Bachra, a strategist at Natwest Markets in London

“They will try hard to pitch this as a recalibration of purchases from emergency settings rather than the start of a taper down to zero…Higher yields might be tolerated, but higher spreads may not.”

“Looking back at similar crackdown episodes in the past, we note that the Chinese government did eventually ease restrictions to avoid stifling wider economic growth momentum. For most those past episodes, the market’s initial negative reaction created buying opportunities for long term investors…Despite the severe market volatility recently witnessed, generally speaking, Chinese corporate fundamentals remain strong…In the tech sector, for example, many of the companies impacted are investment-grade rated, with strong balance sheets, high net cash positions and low amounts of debt. In the real estate sector, for instance, companies that can endure the changes could emerge with stronger balance sheets….and for the tech sector, increased competition and the break-up of monopolies could bring fairer prices for consumers and better protections for workers.” 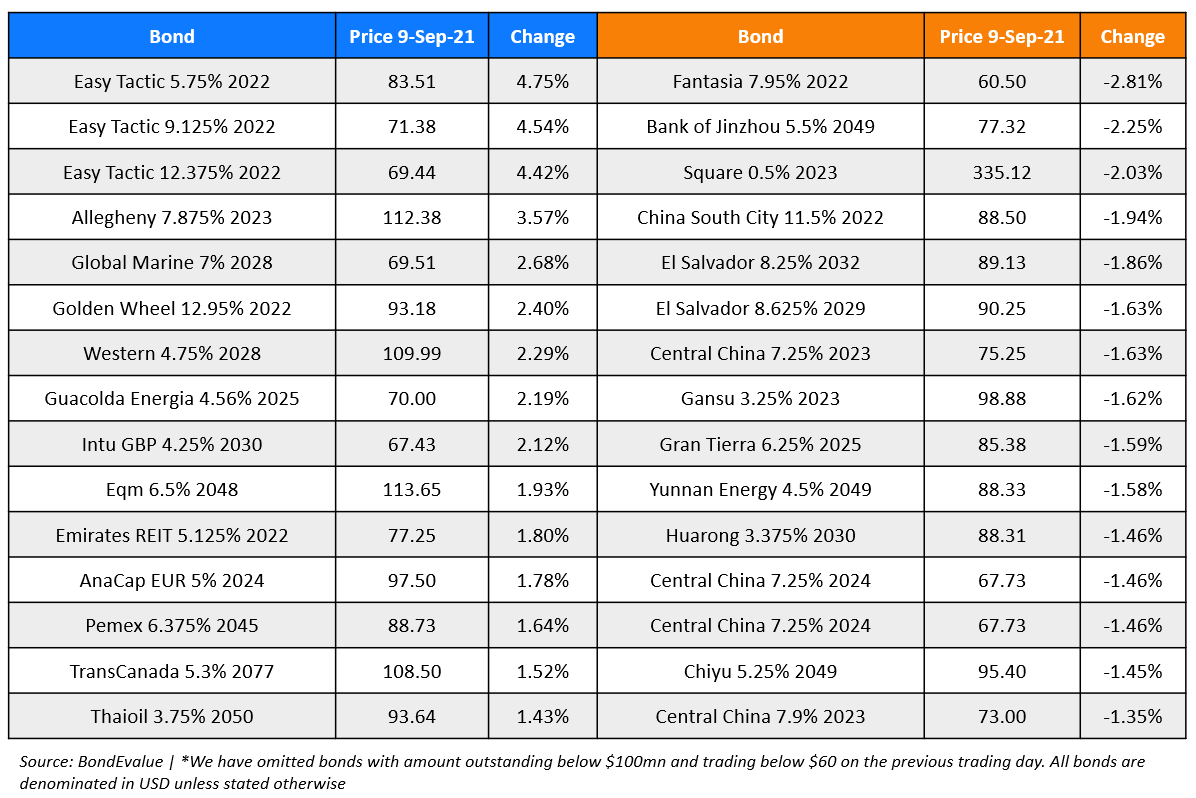