S&P was up 0.7%, led by the energy and tech sectors. US ISM Manufacturing PMI printed at 60.7, strongly beating expectations of 56.6. European equities on the other hand were lower ~0.5% as Covid cases and related lockdown fears affected sentiment. US 10Y Treasury yields were up 6bp to 0.98% with the Georgia senate runoff possibly going to the Democrats though it is too close to call. US IG CDS spreads were 0.7bp tighter and HY was 0.94bp tighter. EU main CDS spreads were flat and crossover spreads widened 1.25bp. Asia ex-Japan CDS spreads widened 1.6bp and Asian equities have opened ~0.2% lower. The momentum continues in the Asian primary bond markets with 10 new dollar bond deals launched including Indian financials SBI and Shriram Transport Finance along with a host of Chinese real estate developers. 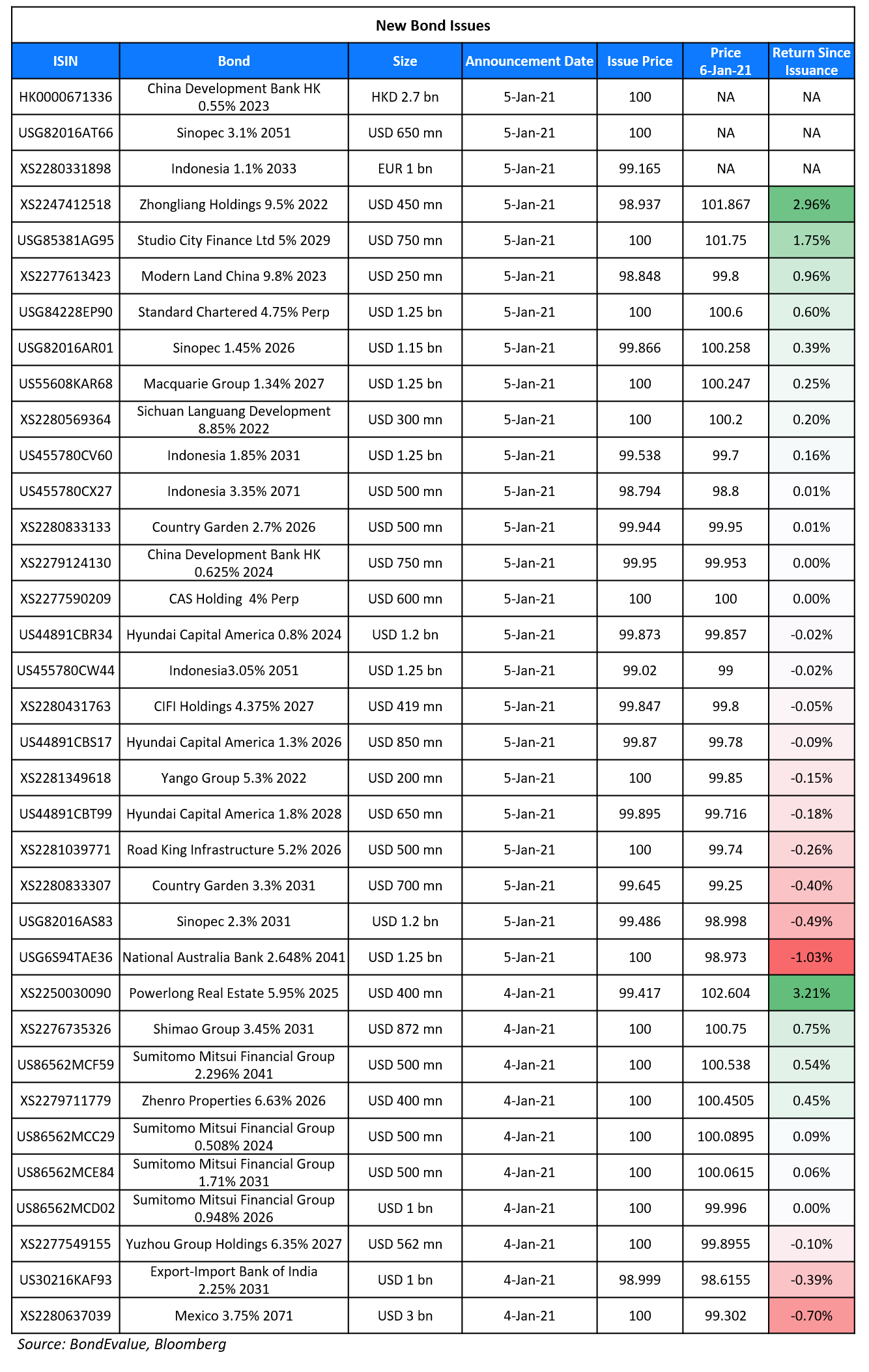 Standard Chartered raised $1.25bn via a perpetual non-call 10Y (PerpNC10) AT1 bond at a yield of 4.75%, 75bp inside initial guidance of 5.5% area. This is the first AT1 issuance in 2021. The bonds have expected ratings of Ba1/BB-/BBB-. Order book details were not available at the time of writing.

China Development Bank (CDB) Hong Kong Branch raised $750mn via a 3Y bond at a yield of 0.642% or T+48bp, 37bp inside initial guidance of T+85bp area. The bonds have expected ratings of A+ and received orders of over $3.9bn, 5.2x issue size that included $1.9bn from the lead managers. Proceeds will be used for working capital and general corporate purposes. Asian investors took 74% of the bonds and EMEA 26%. Banks were allocated 63%, central banks 20%, and fund managers, insurers and others 17%. The bonds trade ~20bp tighter to their existing 0.95% 2023s yielding 0.85% in the secondary market.

Sinopec raised $3bn via a triple-trancher. It raised:

The bonds have expected ratings of A1/A+, and received orders over $8.5bn, 2.8x issue size.

Hyundai Capital raised $2.7bn via a triple-trancher. It raised:

The bonds have expected ratings of Baa1/BBB+. Ultimate parent company Hyundai Motor Company is the support agreement provider. Proceeds will be used for general corporate purposes. The 3Y, 5Y and 7Y bonds have make whole calls at T+12.5bp, T+15bp and T+20bp respectively.

PCCW unit CAS Holding No 1 raised $600mn via a subordinated perpetual non-call 5.5Y (PerpNC5.5) at a yield of 4%, 25bp inside initial guidance of 4.25% area. The bonds have expected ratings of Ba2/BB and received orders over $2.25bn, 3.75x issue size. Wholly owned subsidiary CAS Capital No 1 will issue the hybrid securities with a guarantee from CAS Holding No 1. The bonds can be called on the first reset date after 5.5 years, with a 25bp coupon step-up after 10.5 years and a further 75bp step-up after 25.5 years if not called. The bonds will count as equity under Hong Kong accounting standards. Both Moody’s and S&P consider the perps to have a 50% equity component and S&P’s equity treatment drops away after 5.5 years.

Among the best performing bonds, insurance company AIA Group led with a 11% return last year followed by ITC Properties’ (Treasure) that rose by 10%. Besides these, Hutch, Road King and Hysan were also among the best performers. Among the worst performers, several perpetual bonds from corporates and one bank made it to the list with names such as FWD, Chiyu Banking, CSI Properties’ Estate Sky and Far East Consortium. 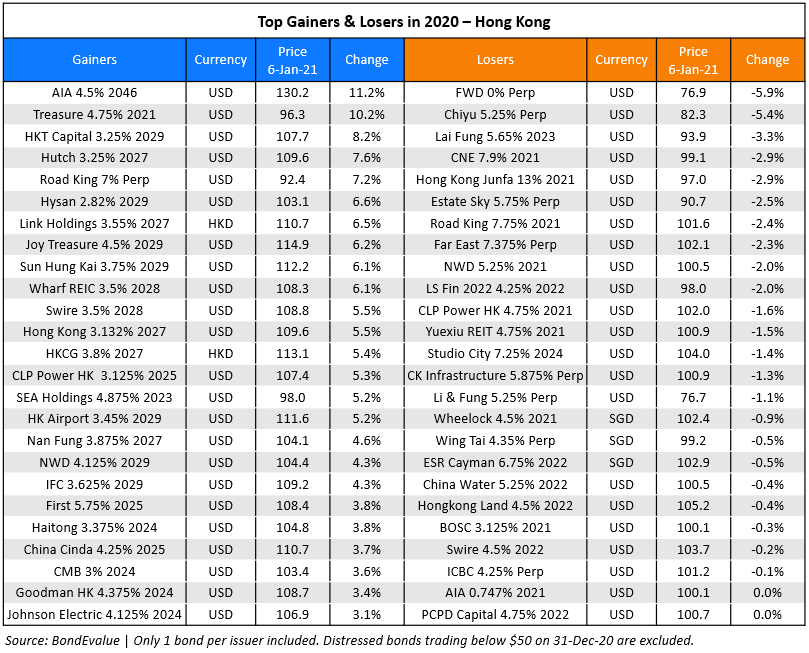 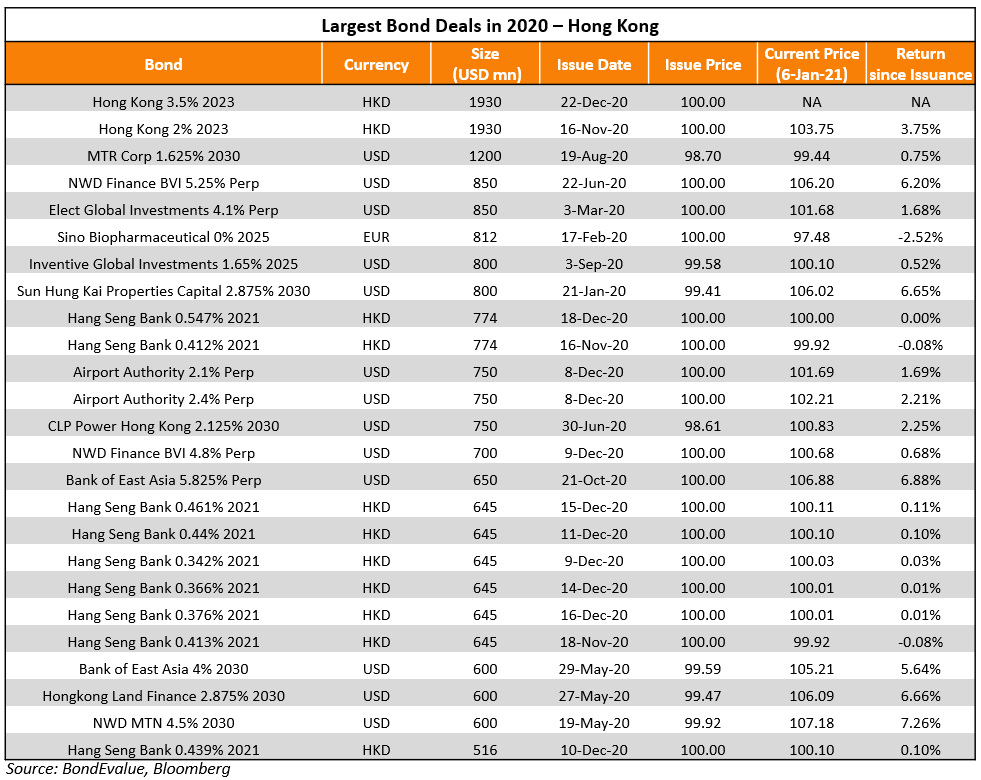 Indonesia raised a total of $4.23bn via a multi-currency deal. It raised:

The bonds have expected ratings of Baa2/BBB/BBB, in line with the sovereign. Citigroup (B&D), DBS Bank Ltd., Deutsche Bank, Mandiri Securities, Standard Chartered Bank were the joint bookrunners. The new 10Y and 30Y bonds were priced tighter by 7bp and 6bp than its older 3.85% bonds due October 2030 and 4.2% bonds due October 2050 that currently yield 1.97% and 3.16%.

Australian lenders Macquarie Group and National Australia Bank (NAB) tapped the international bond markets with new dollar bonds priced on Tuesday. Macquarie raised $1.25bn via 6Y non-call 5Y (6NC5) fixed-to-floating bonds at a yield of 1.34%, 97bp over Treasuries and 38bp inside initial guidance of T+135bp area. If not called on January 12, 2026, the bond’s coupon would reset to the prevailing SOFR plus a spread of 106.9bp. The bonds are expected to be rated A3/BBB+/A- in line with the issuer rating. The new bonds offer a yield pick-up of 43bp compared to Macquarie’s 3.9% fixed-rate non-callable bonds due January 2026 issued in 2016, which are currently trading at 114.63 yielding 0.91% on the secondary markets.

Mexican state-owned oil giant Pemex is reportedly staring at a cash crunch in the new year as it recently cashed in government notes worth $4.8bn that were earmarked to fund vast pension liabilities ahead of a ~$2bn debt repayment due this month. The FT reported that Pemex swapped untradeable promissory notes worth MXN 129bn ($6bn) given by the government for standard sovereign debt and cashed them in in mid-November.

Simon Waever, strategist at Morgan Stanley said, “It’s a bigger and bigger hole. Oil production isn’t rebounding and the government doesn’t have as many revenues to play with. Unless they are lucky and production picks up, they will need to consider other ways. A broader tax reform is the most realistic solution.” On the promissory notes transaction, he added, “They haven’t said how they monetised the bonds. Foreign ownership went up significantly [in November] so either they just sold them abroad [in the market] or, and I think more likely, they entered a repurchase agreement with foreign banks where they exchanged these new liquid government bonds with foreign banks and the foreign banks gave them cash with the promise that Pemex would buy them back in future. They’re very good at finding creative ways [to refinance Pemex] and this is yet another one.”

In the first sovereign bond deal in the Eurozone this year, Italy received an overwhelming response to its €10bn ($12.3bn) bond due 2037 priced to yield 0.992% on Tuesday with investor bidding a whopping ~€105bn ($129bn), 10.5x issue size. The new bonds were priced 8bp over its older bonds as per Bloomberg. The demand for the new Italian bonds rated BBB/Ba3/BBB- was only slightly shy of last year’s ~11x demand for its €8bn 30Y issuance. Imogen Bachra, European rates strategist commented that “People want Italian bonds” while adding “There will be lots of supply for the market to take down in the next few weeks.”

The yields on the Eurozone bonds have continued to slide with impetus from the ECB’s stimulus program that includes purchase of bonds. This has helped drive the demand higher. While the Italian 10Y bond yield had fallen to lows of 0.51% in December, the Irish 10Y yields touched an all time low of -0.34 on Monday. The reduced pace of economic recovery on the back of a fresh wave of covid-19 cases only lends further support to the bond market. 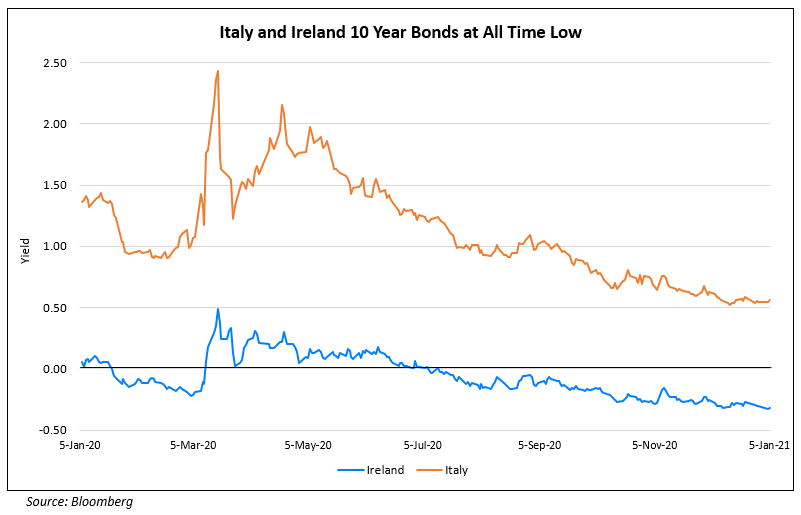 Saudi Arabia’s foreign minister announced on Tuesday that the Kingdom along with three other nations have restored ties with Qatar after a rift that began three years ago. In June 2017, Saudi led a coalition of Gulf countries that cut ties and transport links with Qatar on allegations of backing radical Islamist groups and Doha’s close ties with Iran. The coalition consisted of fellow GCC members UAE and Bahrain, and Egypt. Saudi Prince Faisal bin Farhan said at a press conference, “What happened today is… the turning of the page on all points of difference and a full return of diplomatic relations.”

Mr Trump said the “pace and pervasiveness” of the spread of Chinese software apps “continue to threaten the national security, foreign policy and economy” of the US.

“By accessing personal electronic devices such as smartphones, tablets, and computers Chinese connected software applications can access and capture vast swaths of information from users, including sensitive personally identifiable information and private information,” he said.

Raising rates or paring back the Fed’s asset purchases before the central bank’s economic goals are met would be a “lose-lose scenario (that) could not just threaten the achievement of our dual mandate objectives, but might not even improve financial stability either, given that financial stability is bolstered by a strong economy,” Evans said. “Perhaps it is time for financial institutions and their supervisors to do the same—that is, review their business models and make their supervisory and regulatory strategies as robust and resilient as possible—in this low nominal interest rate environment.”

On the view that the US central bank should woo higher inflation – Charles Evans, Chicago Federal Reserve President

“Frankly if we got 3% inflation that would not be so bad,” Evans said. “It is very difficult to imagine out of control inflation, even with the large debt that fiscal authorities have been running up.”

“We have the steady drumbeat of negative COVID news and that is something relatively key to the ECB pledges to buy bonds and to support the economy,” said Bouvet. “Therefore from the point of view of investors, this is an additional comfort blanket to go and snap up all the bonds that are being sold in January,” he said. “It’s about 80% the ECB and about 20% the EU recovery fund – it’s that sort of a magnitude. The ECB buying is happening now, the Euro recovery fund is going to start making payment second half of this year … it’s slower burning, I think,” said ING’s Bouvet.

On the risk that companies returning to profit may struggle to service their liabilities – Howard Marks, Oaktree Capital founder

“The market is so bifurcated, high relative to historic valuations,” he added. “And bonds [and] credit are offering in general the lowest returns in history.” “Even borrowers that eventually are profitable may find themselves over-levered after the pandemic and struggle to service their debt,” he said.

On investors’ skepticism over Bank of England’s QE programme

“We do not . . . set a level of quantitative easing and asset purchases in any way related to what the government is going to borrow.”

“In this extraordinary year of gilt supply, the BoE has been the dominant buyer,” said Amis. “Without this significant support, bond yields would have risen significantly. Very simply, the gilt market could not have taken down the record £485bn supplied by the Debt Management Office to the market this year.”

“Signalling impacts are more limited now than in the early days of QE,” said Bell. “With each subsequent QE announcement, the impact has been lower. At the current juncture, the intention of the bank appears primarily to offset the Treasury supply to maintain the low level of yields.

“Fiscal-monetary co-ordination has been a noteworthy feature of the UK’s Covid-19 policy response, with November’s QE expansion being announced in tandem with the chancellor’s decision to extend the furlough scheme until March 2021,” said Gill. “BoE buying has largely kept pace with Treasury issuance in recent months, keeping gilt yields in check.”

“The problem now is that growth or inflation has never particularly materialised [as a result of the BoE’s bond purchases],” said Inches. “As a result all QE has achieved is asset price growth.” 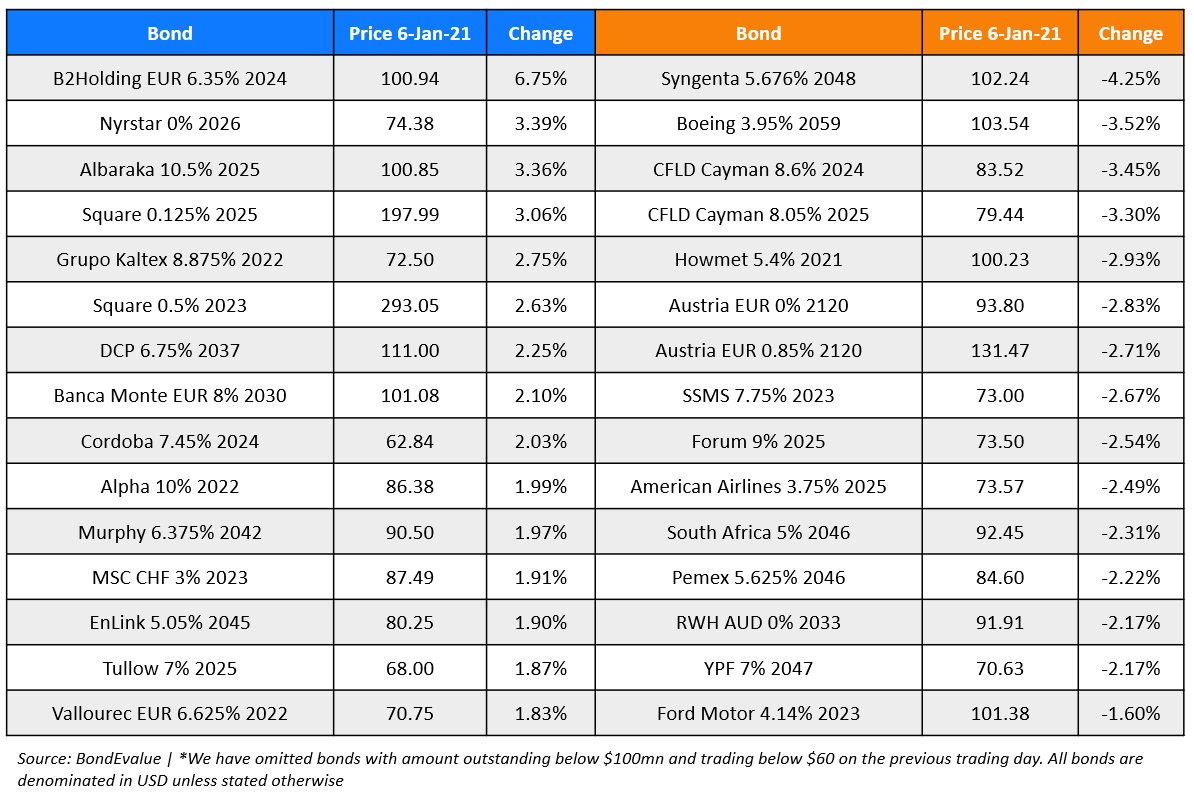