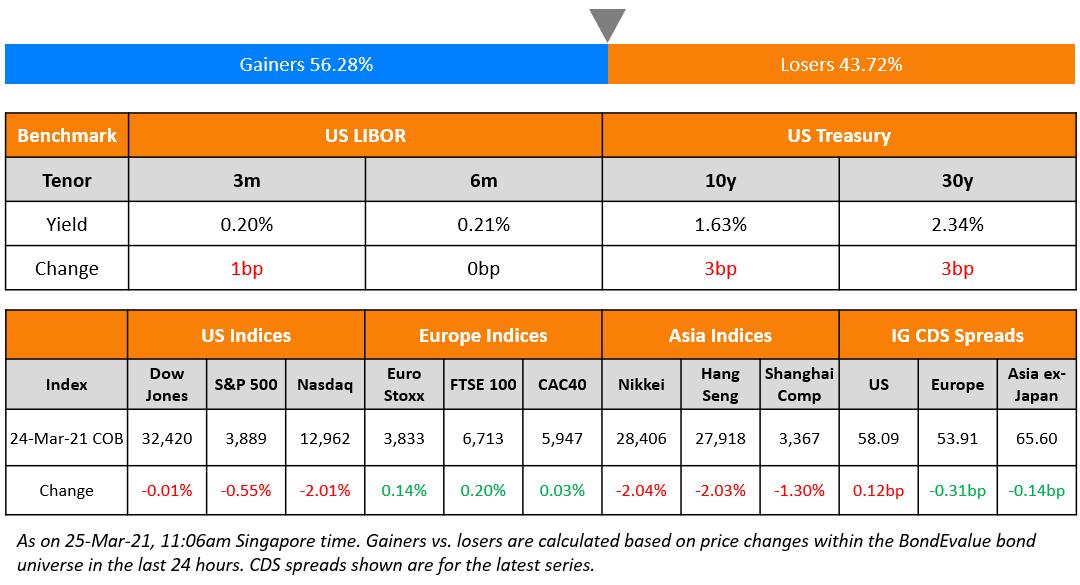 S&P ended 0.6% lower while Nasdaq saw another beat down by 2% as tech shares continued to tumble. The US 10Y Treasury yield rose 3bp to 1.63%. As per IFR, many see US 10Y yields settled within a range of 1.60%-1.75%, with the major worry for equities being an upside breakout towards 2%. New lockdowns in Germany and France contained European equities with the DAX down 0.4% while CAC was flat. US IG CDS spreads were 0.1bp wider and HY was 0.7bp wider. EU main CDS spreads were 0.3bp tighter and crossover spreads tightened 2.2bp. Asian equity markets are off to a soft start, up 0.2% and Asia ex-Japan CDS spreads are tighter 0.1bp.

Keen to learn bond market fundamentals from industry professionals? Sign up for our Bond Traders’ Masterclass with Bond Valuation & Risk today at 6pm SG/HK. Avail a 20% discount on a bundle of four sessions! 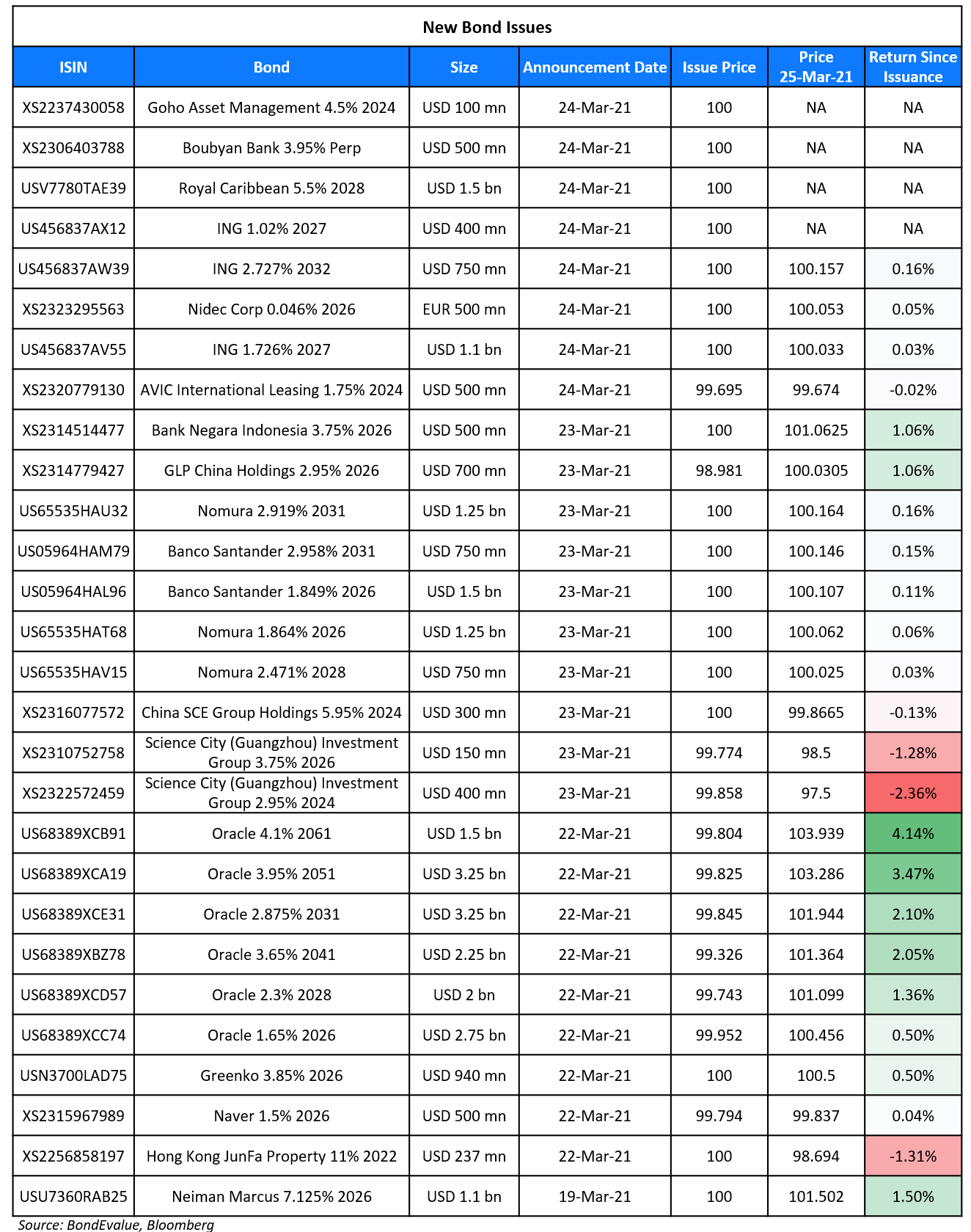 AVIC International Leasing raised $500mn via a 3Y bond at a yield of 1.855%, or T+155bp, 45bp inside initial guidance of T+200bp area. The bonds have expected ratings of A- and received orders over $1.3bn, 2.6x issue size. Asia took 98% and Europe 2%. Banks/financial institutions got 67%, fund/asset managers 20%, private banks 11% and central banks 2%. The bonds have a change of control put at 101. Proceeds will be used for debt replacement and leasing projects.

Goho Asset Management raised $100mn via a 2Y11M SBLC-backed bond at a yield of 4.5%, same as initial guidance of 4.5% area. New Momentum International is the issuer and the bonds are unrated and guaranteed by Goho AMC. The bond have the support of a standby letter of credit (SBLC) from Bank of Jiujang. Around 33% of the proceeds will be used to repay offshore debt, 57% to acquire distressed assets, and the remainder for working capital purposes.

Kuwaiti lender Boubyan Bank raised $500mn via a Perpetual non-call 6Y (PerpNC5.5) Tier 1 Sukuk at a yield of 3.95%, 30bp inside initial guidance of 4.25% area. The bonds were unrated. The bonds have an optional redemption at par in whole and not in part on any day falling between (and including) the first call date (October 1, 2026) and the first reset date (April 1, 2027). If not called, the coupon will reset on the first reset date and every six years thereafter at the 6Y UST plus a margin of 289.6bp. Boubyan Tier 1 Sukuk is the issuer and Boubyan Bank is the obligor. Boubyan’s issue has the third lowest coupon on a GCC Perpetual Tier 1 sukuk after NBK and NCB’s offerings earlier this year at a coupon of 3.625% and 3.5% respectively.

Rhino bonds are bonds designed to raise funds for growing the population of endangered black rhinos in South Africa. These will be issued by the World Bank this year, looking to raise ZAR 670mn ($45mn) via 5Y bonds as the world’s first wildlife conservation bond. Investors’ returns will be determined by the rate of growth in the population of these rhinos in two South African reserves.

“We’re looking for actual improvement in the economy and inflation to get back up to our dual mandate objectives of maximum inclusive employment and 2% inflation on average,” Evans said.

The Fed will use a “dose of patience” and will not get “overly joyous” as the jobless rate falls, Daly said. “We are not going to take this punchbowl away….We are committed to leaving the monetary policy accommodation in place until the job is fully and truly done.”

“I don’t know when we will take the next policy action because it will be driven by what happens in the economy,” Williams said. “I see the U.S. economy recovering really nicely over the next couple of years,” Williams said. “I don’t see inflationary pressures really building during that time.”

“Past experience shows that whenever US yields go up, capital markets in emerging and developing markets take a major hit,” he said. “We are very concerned about the potential risks surrounding the debt pile-up.”

“We will eventually get down to a pace of QE purchases that maintains — but no longer increases — the amount of stimulus being provided,” Gravelle said. “It won’t necessarily mean that we have changed our views about when we will need to start raising the policy interest rate,” Gravelle said. 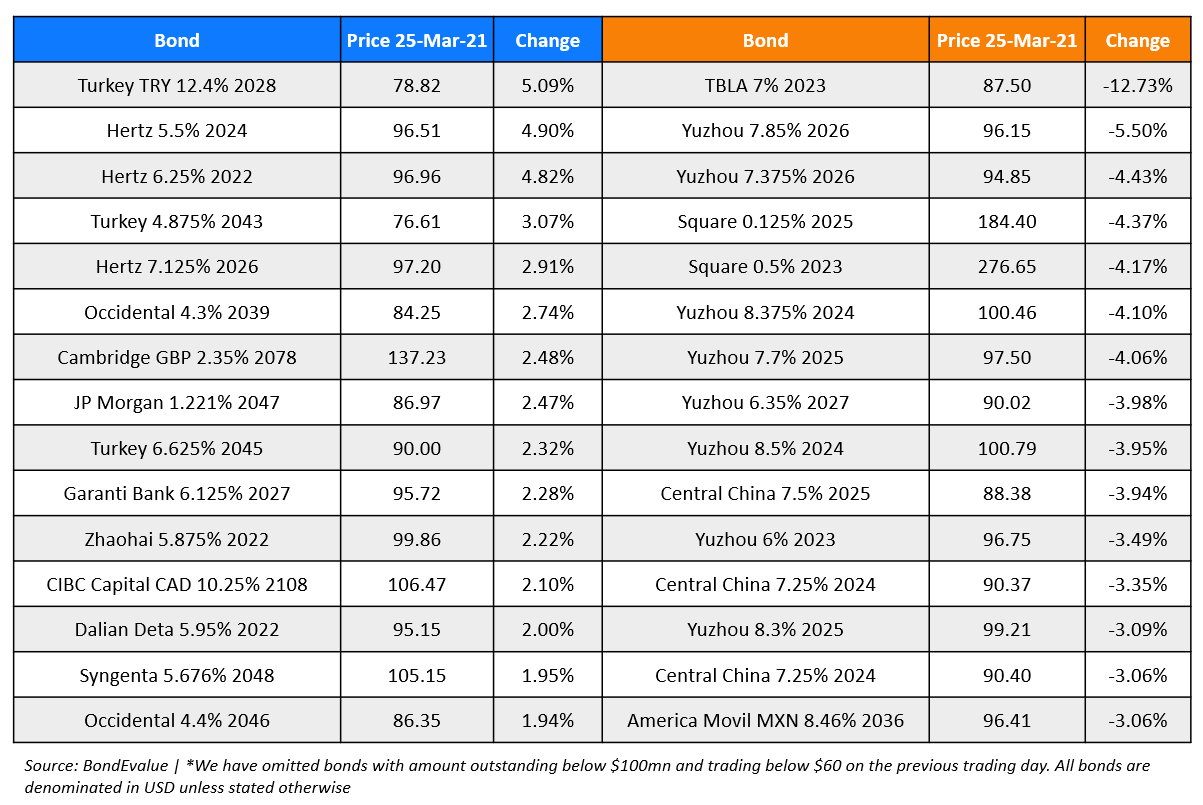