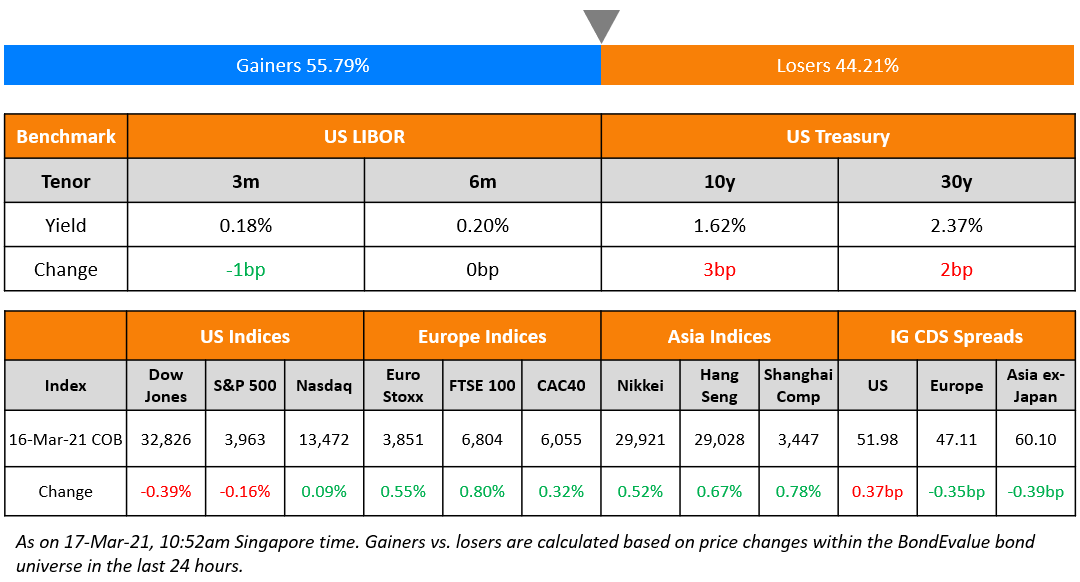 US equities were muted with the S&P down 0.2% and Nasdaq up 0.1%. US retail sales and industrial production fell 3% and 3.5% in February, sharply lower than forecasts of 0.5% and 0.1% respectively, impacted by the winter freeze. Despite the soft data, US 10Y Treasury yield pushed higher by 3bp. All eyes are on the Fed meeting today, which would see them review their dot plot and give clues on their policy stance. In Europe, DAX rose 0.7% while FTSE and CAC were up 0.8% and 0.3%. US IG CDS spreads were 0.4bp wider and HY was 2.8bp wider. EU main CDS spreads were 0.4bp tighter and crossover spreads tightened 2.7bp. Asian equity markets have opened lower by 0.3%-0.4% and Asia ex-Japan CDS spreads are tighter 0.4bp.

We are also conducting a complimentary webinar “Navigating The Bond Markets by Leveraging The BEV App” today at 6pm SG/HK to help users exploit the BondEvalue app to manage their bond portfolio on the WebApp as well as the Mobile App. 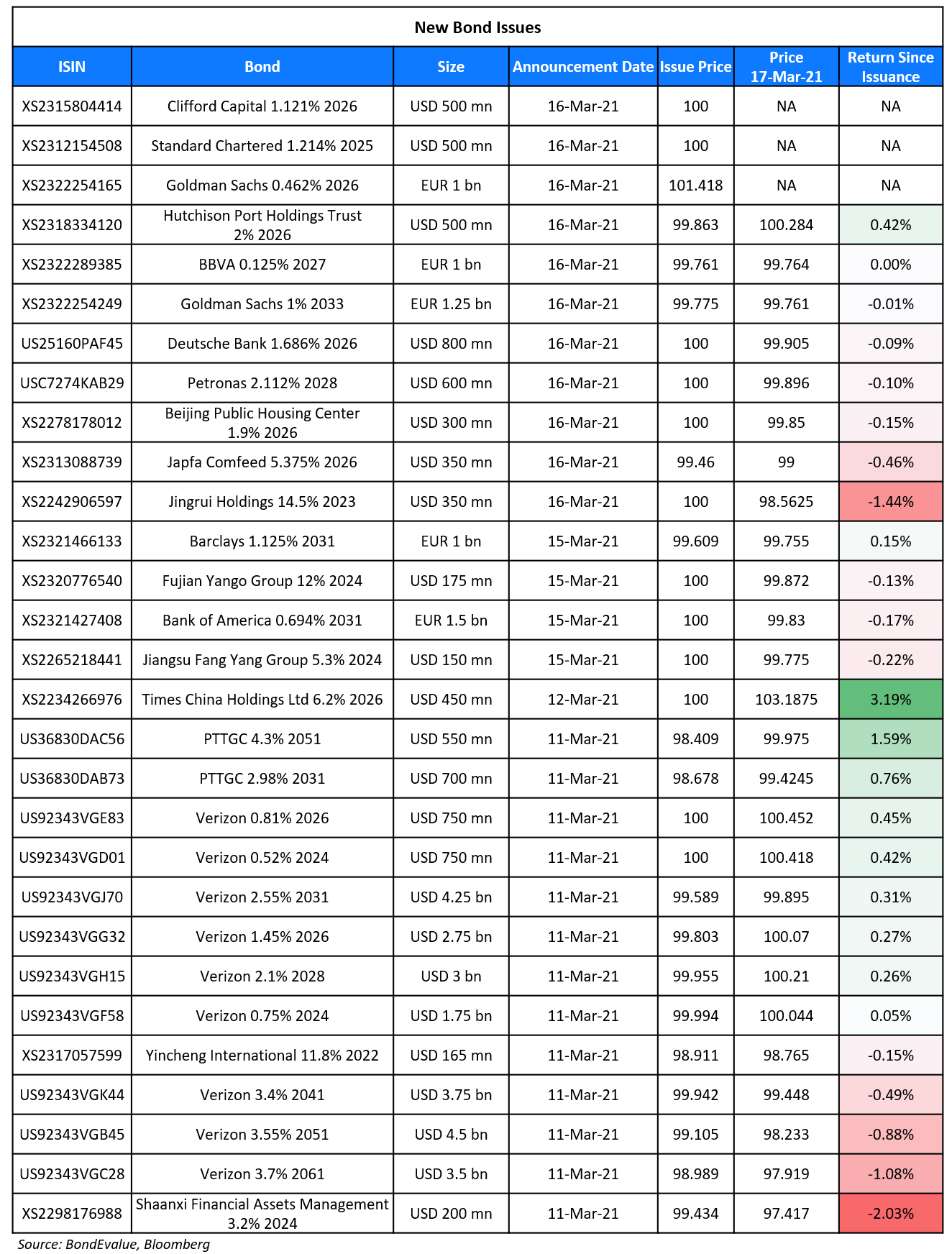 Hutchinson Port Holdings Trust (HPHT) raised $500mn via a 5Y bond at a yield of 2.029%, or T+120bp, 35bp inside initial guidance of T+155bp area. The bonds have expected ratings of Baa1/A- and received orders of over $3bn, 6x issue size. HPHT Finance (21) is the issuer and Hutchison Port Holdings Trust acting through its trustee-manager, initially being Hutchison Port Holdings Management, is the guarantor. Proceeds will be used to refinance debt and/or general corporate purposes. CK Hutchinson is the largest unit holder in HPHT according to Moody’s and Temasek holds 14.02%. HPHT operates ports assets in Hong Kong and Shenzhen.

Petronas raised $600mn via a 7Y bond at a yield of 2.112%, or T+85bp, 40bp inside initial guidance of T+125bp area. The bonds have expected ratings of A2/A-, and received orders over $2.6bn, 4.5x issue size. Proceeds will be used by to fund the issuer’s development and production activities and for debt refinancing and general corporate purposes.

Goldman Sachs raised ~$3.74bn via a dual-currency three-trancher. It raised:

Clifford Capital raised $500mn via a 5Y bond at a yield of 1.121%, or T+30bp, 0-5bp inside initial guidance of T+30/35bp. The bonds have an expected rating of AAA, and received orders over $1.1bn, 2.2x issue size. The bonds come with an unconditional and irrevocable guarantee from the Government of Singapore. Proceeds will be used for general corporate purposes. Clifford Capital provides project finance and structured debt financing services for Singapore-based companies to support overseas investments, exports and infrastructure. Singapore sovereign wealth fund Temasek Holdings holds an over 40% stake in the company.

Beijing Public Housing Center raised $300mn via a debut 5Y bond at a yield of 1.9%, a massive 60bp inside initial guidance of 2.5%. The bonds have expected ratings of A1/A+, in-line with the guarantor and received orders over $4bn, 13x issue size. They will be issued by wholly-owned Hong Kong subsidiary Yan Gang and guaranteed by Beijing Public Housing Center. Proceeds will be used for construction of projects and other general corporate purposes. The guarantor is wholly-owned by the Beijing municipal government.

Japfa Comfeed Indonesia raised $350mn via a 5Y non-call 3Y (5NC3) sustainability-linked bond (SLB) at a yield of 5.5%, 37.5bp inside initial guidance of 5.875% area. The bonds have expected ratings of BB-/BB- and received orders over $1bn, 2.9x issue size. EMEA took 57%, Asia ex-Japan 42% and US 1%. Fund managers/insurance/pension funds got 88% and private banks 12%. The bonds are the first SLBs from Indonesia. Certain of the issuer’s existing subsidiaries are subsidiary guarantors. There is a sustainability-linked one-time coupon step-up of 25bp if the animal feedmaker fails to satisfy its sustainability performance target by three months prior to year four. Japfa Comfeed aims to construct a total of nine water recycling facilities at the company’s or the restricted subsidiaries’ slaughterhouses and hatcheries. Proceeds will be used for repayment of its existing $250mn bonds due 2022 and for general corporate purposes, including capital expenditure, working capital and debt refinancing.

Jingrui Holdings raised $110mn via a tap of their 14.5% 2023s at a yield of 14.005%. The bonds were rated B3/B+ with proceeds going towards debt refinancing. The original notes were issued in November last year through an exchange offer plus a concurrent new money issue.

Bonds whose size is fixed and cannot be increased are called ‘Will Not Grow (WNG)’ or ‘No Grow’ bonds. As per the Climate Bonds Initiative (CBI), green bonds often fall into this category. The CBI says that issuers need to show that there are enough green projects to match the amount that they intend to raise and for some, the number of suitable projects is limited. This according to them shows why green bonds tend to be smaller than vanilla bonds from the same issuer whereas for others there is more flexibility and the final size of the deal can be increased to accommodate investor appetite. StanChart raised $500mn via a WNG 4NC3 sustainability bond priced on Tuesday.

“My concern is that, compared with the enormous U.S. fiscal impulse, the effects of the European one will kick in with a major delay — we’re talking months and years,” Kazimir said. “The joint fiscal reaction is lagging behind and needs to pick up its pace to support the recovery.” Kazimir said the decision was “a reaction to the spillover of the market move triggered by the approval of the U.S. fiscal package.” “With a gradual economic revival, and with generally improving situation, the market rates will naturally react,” Kazimir said. “What’s important is that such an increase reflects economic fundamentals and that there aren’t some speculative, unwarranted moves.”

“It is crucial that banks recognise credit impairments without delay,” he added. “In the coming months, we will closely watch developments and stand ready to postpone the timeline to rebuild buffers if doing so would help the sector to quickly process the expected increase in [non-performing loans].”

On investors increasingly more worried about taper tantrum and inflation

“It’s a catch-22 for the Fed,” said Carron. “They want to communicate that they are going to be patient but the more patient they are, the more people will worry about inflation.”

Innes McFee, chief global economist at Oxford Economics
“Previous episodes have demonstrated that what starts as a benign correction could evolve into a tantrum with wider consequences. Our modelling of a severe market scenario finds a significant impact on growth,” said McFee.

According to ING analysts

“The Fed’s challenge is to manage the transition from a low to a high interest rates regime without causing market mayhem,” ING analysts said.

On Treasury sell-off sweeping in to US corporate bond market

“Powell needs to show a bit more concern about the rise in yields,” said Oh. “What you don’t want to do in the recovery phase is to counteract the fiscal stimulus with monetary tightening.”

He said the recent increase in yields is “a little flavour of a big challenge for the next year to a year and a half in fixed income markets”. “The economy is going to really take off and we are going to be back to normal in the US within the next couple of months . . . It’s going to be a very volatile and tricky environment for fixed income,” he added.

Fraser Lundie, head of credit at asset manager Federated Hermes
“There is not much cushion to soften the blow,” said Lundie. “There is much more sensitivity to underlying movement in rates,” said Lundie.

“We are hearing that corporate issuers are pulling issuance forward on the concern that interest rates are on the rise,” said Remley. “For high yield issuers, locking in attractively low fixed coupons is especially important given that they have lower debt coverage ratios,” he said. “If inflation really spikes, the Fed may be compelled to raise their short-term interest rate off 0%, which would be a concern for those that issue floating rate debt,” said Remley.

On the expectations of faster than expected economic recovery in 2021

“We expect growth of gross domestic product of 7% for 2021. We expect that as a base. Along with this we are beginning to see a recovery in employment, and a strengthening of public accounts,” said Guzmán.

“I would like to encourage you to turn your gaze on Argentina,” Fernandez said. “What is lacking are investments to expand local primary production.”

“The pricing-in of inflation in markets is actually the beginning of a major secular change, not an overreaction to what’s going on,” Jensen said. “Economic conditions and inflation will adjust faster than either markets or the Fed are expecting.” “If the risk to equities is higher rates, rates don’t help,” Jensen said. “The ability to use bonds to diversify has got significantly worse and obviously the ability to use bonds to get returns has got significantly worse.” 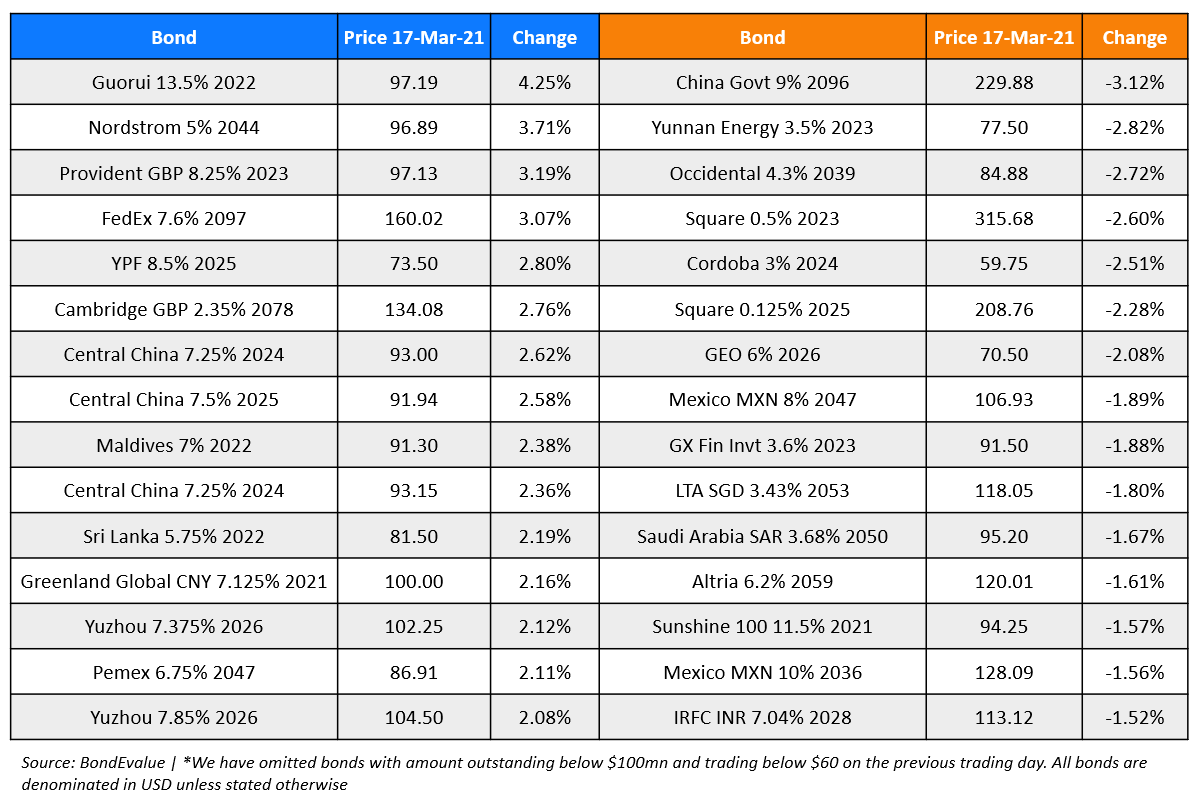