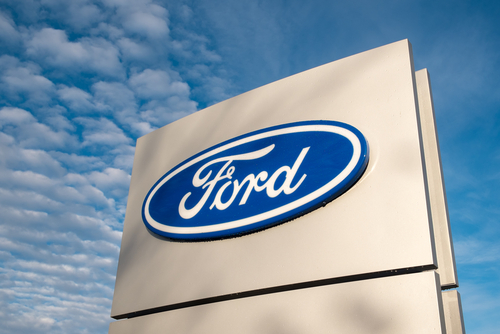 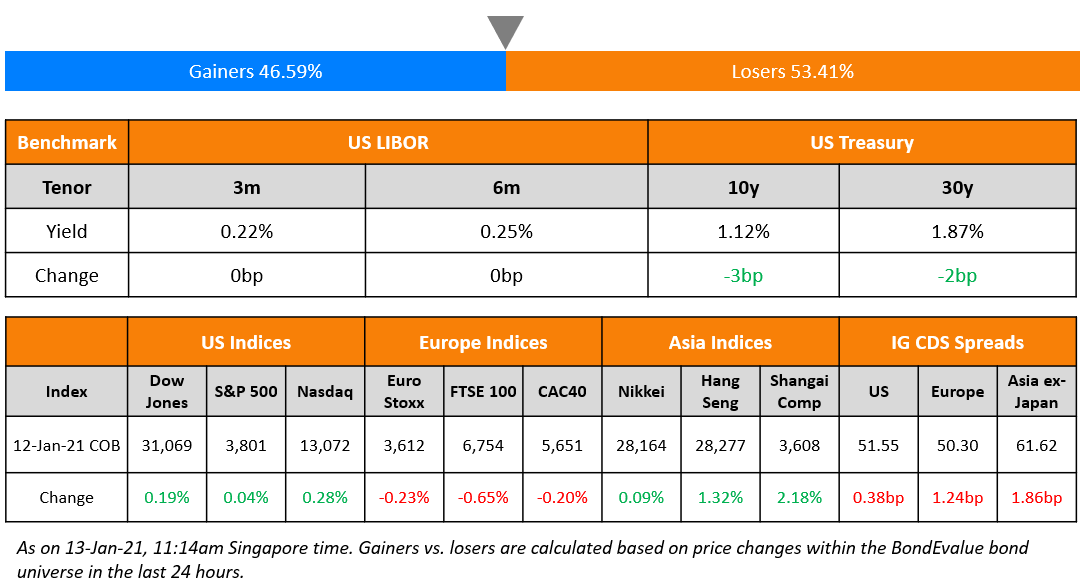 S&P ended the day flat while Nasdaq inched 0.3% higher. While the broad indexes were marginally higher, energy and financial sectors rallied, up 3.5% and 1% with Brent Crude at a 11-month high, currently over $56.5/bbl. US banks’ earnings are due to commence this week as the earnings season begins. US 10Y Treasury yields eased 3bp after a strong auction, especially given the recent rise in yields – bid-cover of 2.45x, above the six auction average of 2.41x and the highest since October. European equities were down ~0.3% while the FTSE underperformed, down 0.7%. Italian 10Y bonds (BTPs) fell as the 10Y yield rose by 11bp to 0.65%, the highest in over a month, on the back of political uncertainty amid doubts over the Italian coalition government’s future. US IG CDS spreads were 0.4bp wider and HY was 1.5bp wider. EU main and crossover CDS spreads also widened 1.2bp and 9.6bp respectively. Asia ex-Japan CDS spreads widened 1.9bp and Asian equities have opened ~0.3% higher. 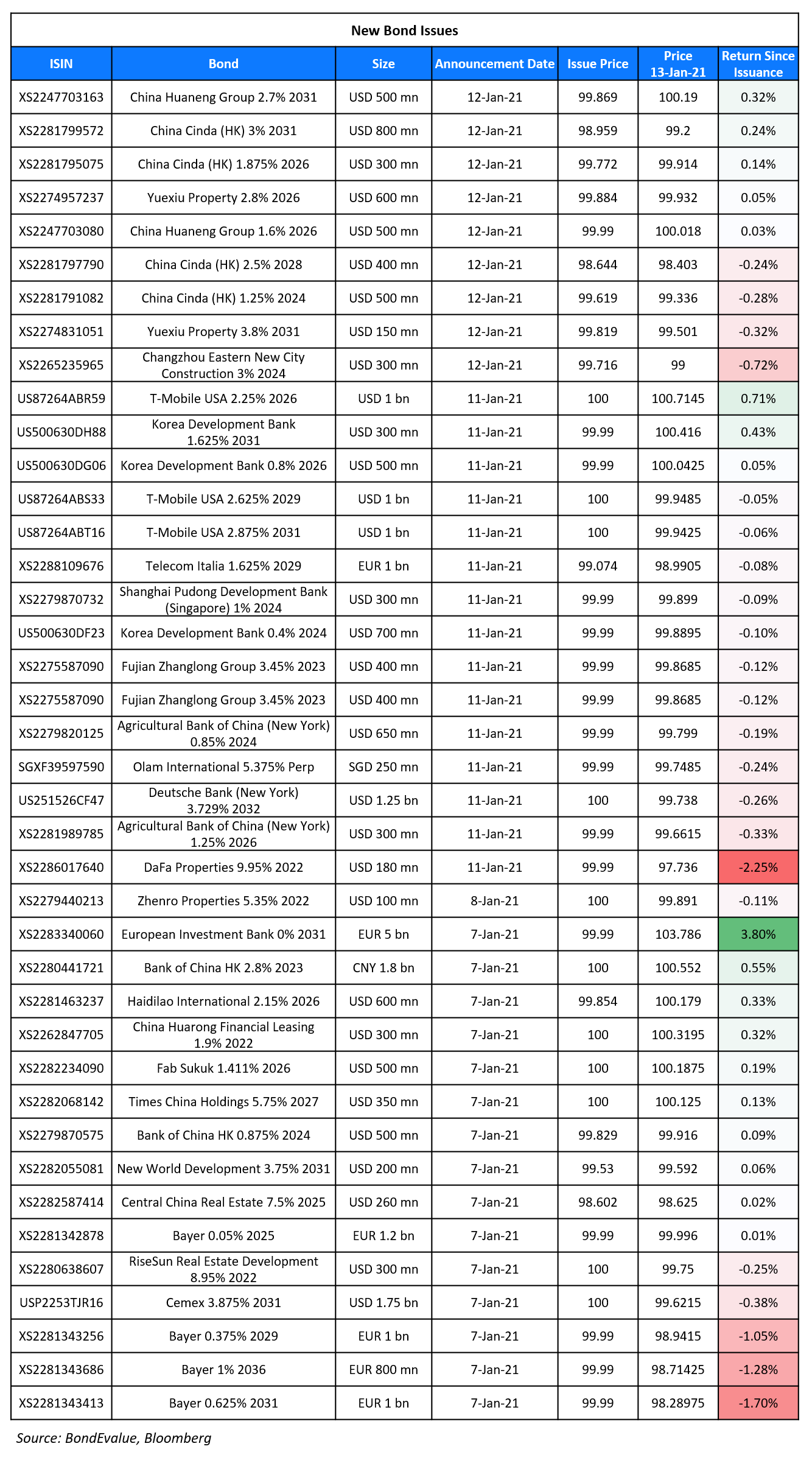 China Cinda raised $2bn via a four-trancher. Below are the details of the issuance:

The bonds have expected ratings of A-/A and a change of control put at 101. While final orderbook details were not available at the time of writing, orders had crossed $13.5bn soon after releasing initial guidance on Tuesday morning.

Housing and Development Board (HDB) raised S$800mn ($604.5mn) via a 5Y bond issued at par to yield 0.635% with a spread of around 10bp based on the prevailing SGD SOR level. The bonds have expected ratings of AAA and will be issued off a S$32bn ($24.2bn) multi-currency MTN programme. This issuance saw HDB print a record low coupon.

Itaú Unibanco, Brazil’s largest privately-owned bank raised $500mn via a 10Y non-call 5.5Y (10NC5.5) Tier 2 sustainability-linked bond at a yield of 3.95%, ~5bp inside initial guidance of low-4% area. The bonds have expected to ratings of B1(hyb)/B+. BTG Pactual, Citi, Crédit Agricole, Goldman Sachs, Itaú BBA and JPMorgan were the bookrunners. Proceeds will be used to finance or refinance sustainable projects.

Among the best performing bonds from the US in 2020, grocery chain Fresh Market led the pack with its 9.75% bonds due 2023 more than doubling through the year. Before the pandemic broke out in the US, Fresh Market was struggling due to the $1bn debt it had accumulated post its acquisition by Apollo Global in 2016. However, the pandemic was a blessing in disguise for the company as consumers started stocking up on groceries amid lockdowns, which led to a 25% boost in revenues for the company in Q2 of last year. Its bonds rallied on the pick-up in revenues from lows of ~38 cents on the dollar in late March to ~103 levels currently. Other prominent names that made it to the best performers list include L Brands, General Motors, FedEx, Freeport McMoran, Bed Bath and GE.

The worst performing bonds list was dominated by corporates operating in industries that were most impacted by the pandemic. These include names from the travel industry such as Hertz, Carnival and Royal Caribbean, energy companies Transocean, Nabors, Gran Tierra, W&T, Gulfport and Occidental and real estate companies Washington Prime and WeWork. 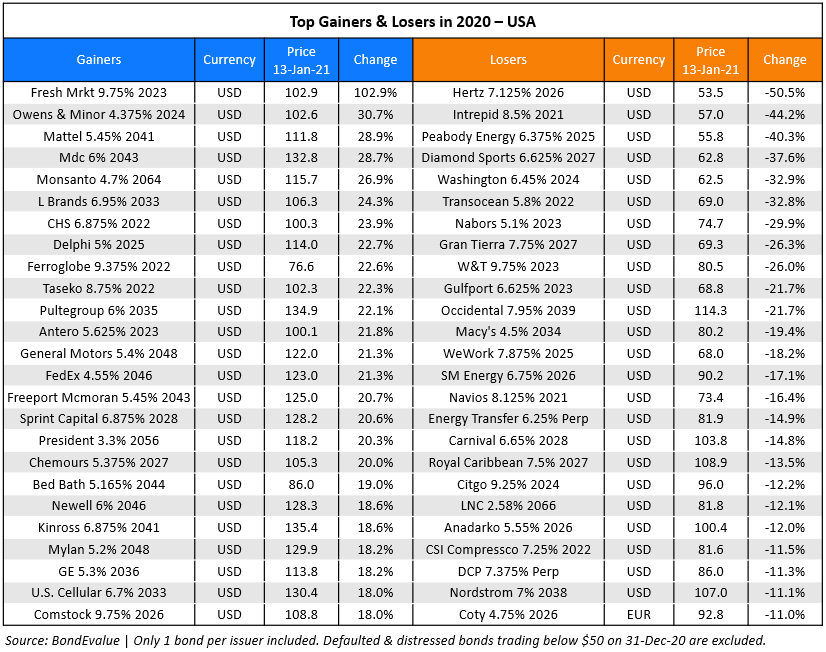 Amongst the largest new bond deals from the US in 2020, only Ford and United Airlines featured from the high yield space with the remaining dominated by investment grade bonds. US banking majors were among the largest issuers last year with names like Wells Fargo, BofA, Citigroup, JPMorgan, Morgan Stanley and Goldman Sachs making the list. The largest single issuance was Boeing’s 5.805% 2050s, part of its jumbo $25bn offering covering various tenors in May last year. All but one bond from the list delivered positive returns (ex-coupon) to investors on the bank of the Fed’s stimulus measures. The two largest deals from Boeing and Wells Fargo delivered solid returns in excess of 30% since issuance, followed by lenders BofAML Citi returning 18-20%.

For more on new bond deals that shattered records in 2020, you can read ‘Record Setting Bubka Bond Market of 2020‘ published in October with a focus on deals with record low coupons and record high deal sizes. 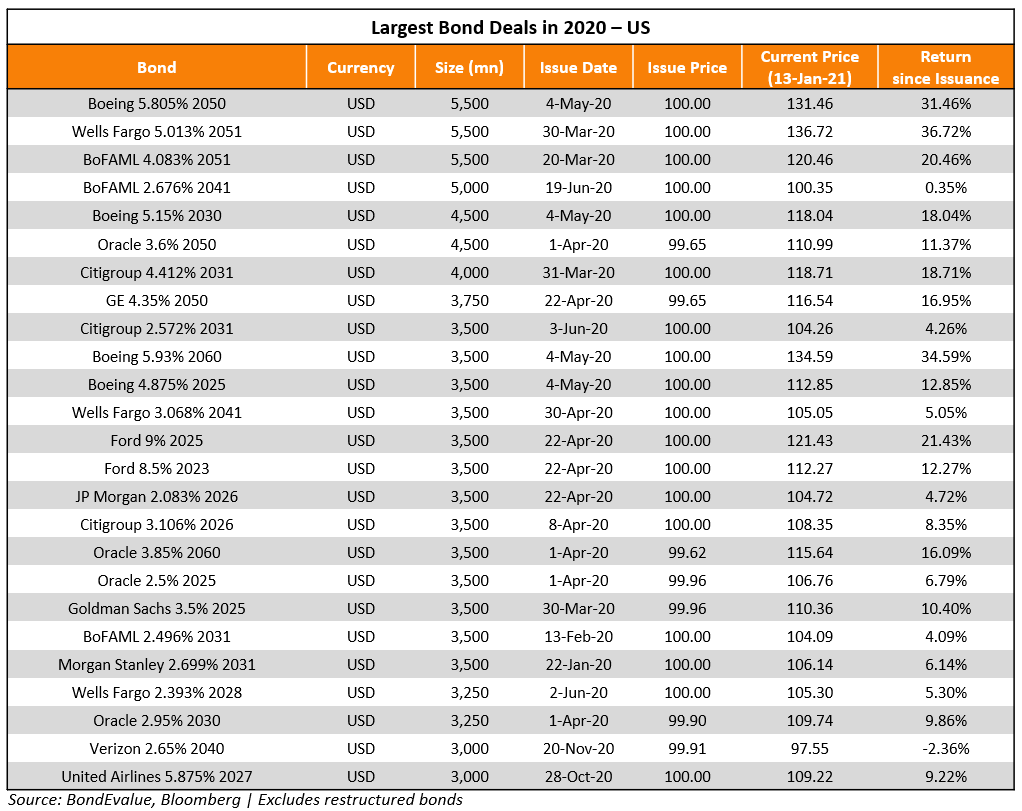 American carmaker Ford Motor Company announced on Monday its plans to close three of its manufacturing plants in Brazil in a bid to trim losses in its South American operations. Ford added that the move would lead to a loss of 5,000 jobs and a pretax charge of $4.1bn. This is part of the company’s $11bn global restructuring, of which it has already taken a charge of $4.2bn in Q3 of last year and is expected to book another $2.5bn in Q4 and $1.6bn in Q1 of this year. JP Morgan analyst Ryan Brinkman views the move as a positive for the fallen angel that is currently rated BB+ by Fitch, stating in a note, “We expect the move to quickly reduce losses in its South American operations, for which we now model a breakeven result in 2020 compared with a loss of US$300 million prior.” Analysts at Credit Suisse echoed the same view, stating that the plant closures supported Ford’s road to improved margins and that a reduced footprint made sense. 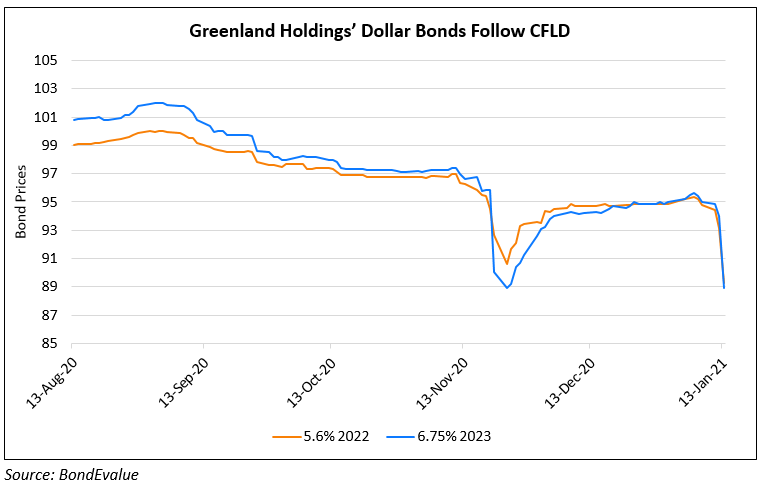 Moody’s Expects Pemex’s Refining Losses to Continue in 2021; Bonds Fall 1-2% Across the Curve

Rating agency Moody’s estimates that Pemex’s production and refining losses would continue in the new year. Moody’s at a press conference said, “The high burden of debt and taxes have not been able to compensate for Pemex’s losses in refining, to say that this trend will change by 2021. We estimate that production will not increase much, more than 1%.” Nymia Almeida, the principal analyst for Pemex at Moody’s also said, “Pemex will not be able to cover its capital investments with its own resources…It cannot buy and sell more productive assets.” Moody’s expects the company to continue refinancing its debt with $6bn to mature in 2021. While oil prices have moved to a 11-month high, Pemex’s bonds have slipped. 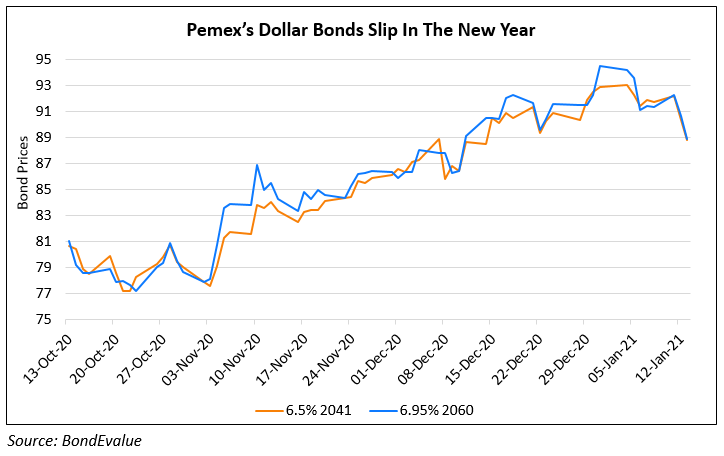 Bondholders of Argentine state-backed energy company YPF have retained law firms Dechert and DLA Piper to block its proposal to restructure $6.2bn in bonds, requesting to negotiate better terms. YPF offered to exchange 7 bonds for new bonds with longer maturities, similar interest rates and no capital reduction on January 7, aimed at reducing near-term payments. YPF wants to swap bonds maturing in March 2021 and 2047 for 3 new bonds maturing in 2026,2029 and 2033 by February 4. The bookrunners for the offer are Citi, Santander, HSBC and Itaú. In the proposal, the bonds due in March 2021 worth $413mn must be restructured on central bank orders – companies with principal payments of more than $1mn per month due before March 31, 2021 must extend repayments by two years on at least 60% of their debt. The bondholders said that the proposal will “unjustifiably impair the value of notes that are not due for several years, and in some cases, decades”, calling it a “coercive, hostile exchange”.

The proposal led Fitch to downgrade YPF to C from CCC, stating that the proposed bond swap constituted a distressed debt exchange. S&P lowered YPF to CC from CCC, warning it could lower it to selective default with completion of the transaction, calling the exchange offer “opportunistic”. YPF’s 6.95% 2027s fell 11.6 points since last Friday’s close.

S&P Global Ratings has forecasted that the total sukuk issuance will rise in 2021 and could touch $140-$150bn in 2021 on the back of issuance from Malaysia, Indonesia and the Gulf Cooperation Council (GCC) countries. The rating agency also expects an increase in the sukuk issuances by corporates. The market conditions are expected to be buoyant through 2021 and the GCC countries, Malaysia, Indonesia, and Turkey are likely to recover from the recession in 2020 as the economy trots back to normalcy on the back of vaccine news and stabilizing oil prices. The record-low rates are only likely to support the global sukuk market. A large part of the new issuance is likely to be used to finance the $65bn of sukuk that will mature this year. The total sukuk issuance in 2020 stood at $139.8bn against $167.3bn in 2019. While the overall sukuk issuance had dropped in 2020, the sukuk issuance in foreign currencies was up. The total foreign currency issuance in 2020 stood at ~$42bn against ~ $39bn in 2019. According to the S&P report, the issuance by governments, central banks, and financial institutions had reduced in 2020 compared to 2019 in GCC, Malaysia as well as Indonesia. However private sector issuance supported by financial institutions fared better with GCC seeing a higher issuance of ~$20bn in 2020 compared to ~$15.5bn in 2019. The overall issuance by banks stood at $9.9bn in 2020 vs. $6bn in 2019. S&P also expects the number of defaults or restructuring among sukuk issuers with low credit quality to rise this year. A small upside is also seen in sukuk aimed at solving social issues related to the pandemic and energy transition. Even though the issuance by financial institutions may drop this year, the rating agency expects this to be replaced by the corporate issuances.

Auction tails and stop-throughs are metrics that can help in understanding whether a bond auction was well bid or not and is to be seen with the bid-cover ratios and other metrics. These are particularly observed in Treasury securities auctions. An auction tail occurs when the final yield of the bond auctioned is higher than the when-issued yield (WI yield) and can indicate that demand was not strong enough even though bid-cover might have been strong. On the other hand, a stop-through occurs when the final yield is lower than the WI yield and can indicate that demand was particularly strong for that bond. For example, in yesterday’s $38bn US 10Y Treasury reopening auction, the auction stopped through by 0.8bp, the biggest in five months as the bonds stopped at 1.164% vs a WI yield of 1.172%.

On monetary-policy support for the U.S. economy while the pandemic is still raging

Federal Reserve Bank of St. Louis President James Bullard
“We want to get through the pandemic and sort of see where the dust settles, then we will be able to think about where to go with balance-sheet policy,”

“I expect it to be a little while before we’re even talking about tapering on our purchases of government and mortgage-backed securities,”

On recovery of US economy in 2021 – Eric Rosengren, Boston Fed chief

“The pandemic is likely to continue to be a problem for public health and the economy until widespread vaccinations take hold,”  “Nonetheless, with substantial fiscal and monetary support, I expect a robust recovery starting in the second half of this year.”

On the effect of Federal Reserve rate actions  on the markets which have forced investors to move into risk assets, Howard Marks, Oaktree Capital Group co-founder

“‘This has required people to invest because they don’t want to sit around with their cash,” Marks said Tuesday in an interview on Bloomberg TV. “They don’t want Treasuries at less than 1% or high-yield bonds at 2%.”

On Boeing’s legal, business challenges persisting even after $2.5 billion agreement to end a criminal investigation by the Justice Department – Federal Aviation Administration officials

“Boeing faces potential civil penalties stemming from its alleged lack of candor in its dealings with regulators before and after two MAX crashes that claimed 346 lives.”