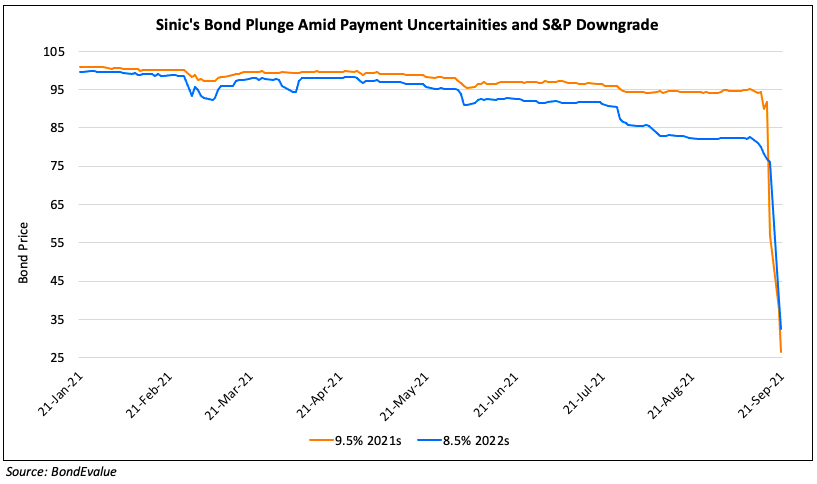 China’s Sinic Holdings has been downgraded to CCC+ from B by S&P and placed on CreditWatch Negative due to elevated payments risks on account of a lack of concrete payment plan for its $246mn 9.5% 2021s due in October despite the company having adequate sufficient unrestricted cash. The company had prepared a plan to repay its 9.5% 2021 with its cash balance of over RMB 14bn ($2.17bn) as of June 30, 2021 but the investor concerns have surfaced regarding the property developer ability to meet its obligations after its equity and debt price plunged in the last few trading days. This comes as most of Sinic’s cash could be inaccessible since it may be trapped at project levels as per the rating agency. Banks could also limit the transfer of funds to the company projects. The rating agency has also revised the company’s management and governance assessment to negative from fair due to lack of adequate risk management and public communication to stakeholders around its repayment plans. It said said, “We downgraded Sinic because the company failed to communicate a clear repayment plan.” and added, “We placed the rating on CreditWatch negative to reflect the execution risks over Sinic’s repayment plans. This is mainly due to the lack of planning and the short timespan before the repayment is due. Given the heightened yields on Sinic’s outstanding senior notes, we believe refinancing by issuing new notes will not be a feasible option.”