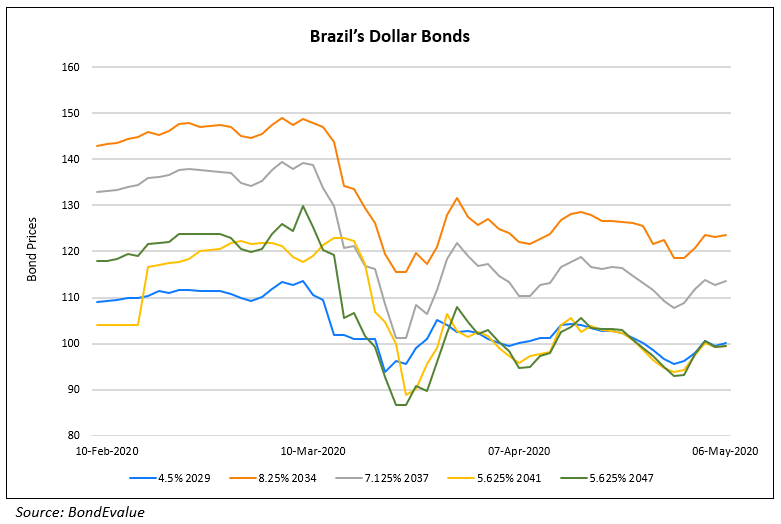 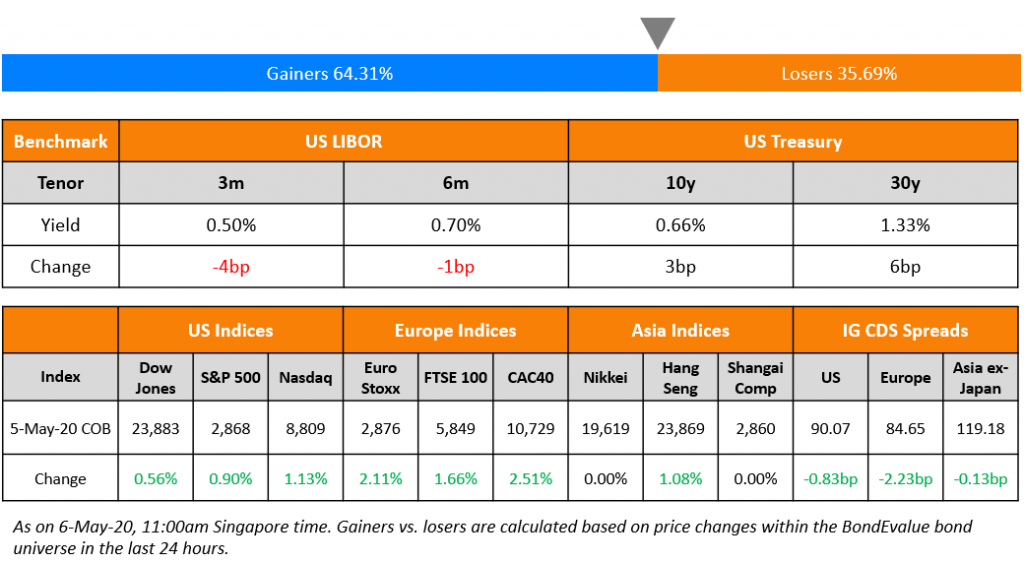 Markets are optimistic as investors look beyond the string of bad data releases to a time of rising demand and employment growth. This is due to the expectation that easing of lockdown restrictions will revive economic activity faster than previously assumed. Crude oil futures prices reflected this with a 20% surge. US stocks rallied led by healthcare stocks but ended the day off their highs following cautionary comments from Fed Vice Chair Richard Clarida. European shares posted gains despite a ruling from Germany’s top court that the Bundesbank must stop buying bonds under the ECB’s stimulus scheme, if the ECB can’t prove they are needed. 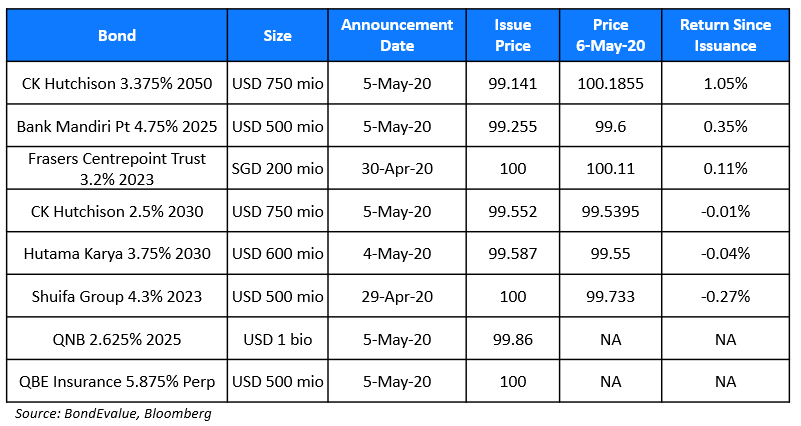 Indonesia’s largest lender Bank Mandiri, rated Baa2/BBB-/BBB-, raised $500mn via 5Y bonds at a yield of 4.9198%, 455bp over Treasuries and 35bp inside initial guidance of 490bp. The 4.75% coupon bonds issued at a discount received orders over $1bn, 2x the issue size. The state-owned bank paid a significant premium compared to the 5Y bond it issued in April 2019, at 165bp over Treasuries to offer a yield of 3.972% at the time of issuance.

Australia-based QBE Insurance Group raised $500mn via perpetual non-call five-year Additional Tier 1 (AT1) bonds at yield of 5.875%, 62.5bp inside initial guidance of 6.5%. The first AT1 deal since the Covid-19 pandemic broke out, the bonds met with strong investor demand with orders worth $3.4bn, 6.8x issue size.

Fitch Downgrades Outlook for Brazil Due to Its Shrinking Economy

Fitch has downgraded Brazil’s credit rating outlook to negative from stable on Tuesday indicating the severe economic effect of the pandemic on the country. It has maintained the junk rating of BB- for the country. According to Fitch, the Brazilian economy is likely to shrink by 4% and the budget fiscal deficit is likely to widen to 13% this year due to its relatively weak fiscal balance sheet and economy. Brazil’s overall debt to equity ratio was likely to increase to 79.4% from 75.8%. The median fiscal deficit and debt to GDP ratio for the countries rated BB is 6.8% and 58.4% respectively. Figures also indicated that the industrial production in Brazil reduced by 9.1% in March. 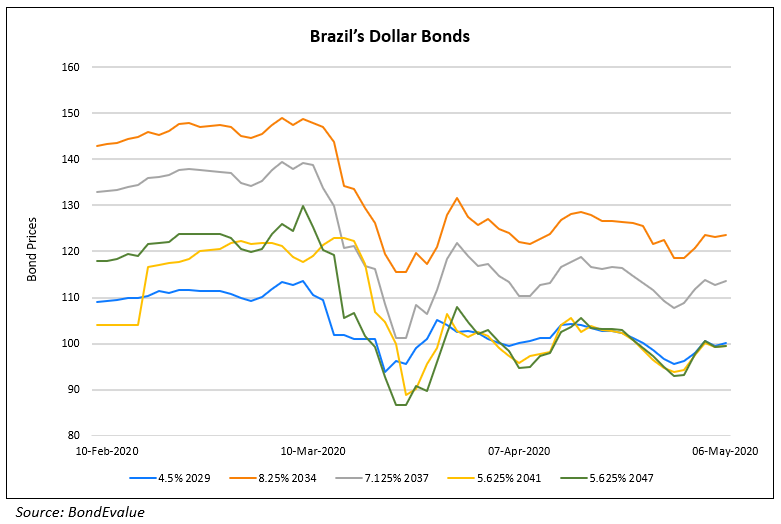 High Yield Bond Issuers Cough Up Over 10% to Raise Funds

Junk rated issuers continue to tap the bond markets, even if they have to offer double-digit yields. Car rental company Avis Budget Group raised $500mn via five-year non-call-two bonds at a yield of 11.297%. The company last tapped the bond markets in June 2019 with an 8Y bond offering a yield of 5.75%. Norwegian Cruise Line raised $675mn via 4Y bonds at a yield of 12.575%. The proposed bonds are offering a yield almost 3.5x of what it offered (3.625%) on a 5Y bond issued in Feb 2019. The bonds will be secured by first-priority claims on two of its vessels, two islands used in operations and intellectual property. Demand for both bonds allowed Avis and Norwegian Cruise Line to upsize the deals from $400mn and $600mn respectively.

Sales of green bonds plummeted in Q1. The issuance were just $33.9bn during the first three months of 2020, a 49% decrease quarter-on-quarter, according to Moody’s. Moody’s forecasts that green bond issuance would remain depressed through the first half of 2020 and the subsequent rebound is likely to be slow. The rating agency lowered its forecast of green bond issuance volume from $300bn to $175-225bn in 2020. If the forecasts turn out to be accurate, this will be the first time in a decade when the issuance could see a decline. Green bonds require fund allocation to specific projects and thus are less attractive in the ongoing circumstances as companies are presently resorting to borrowing to weather the economic slowdown by adding cash.

US-based car rental group Hertz struck a last minute deal with lenders to push its payment deadline from May 4 to May 22, thereby avoiding immediate bankruptcy. The company missed a payments for leasing costs on some of its vehicles in April. The lenders granted an initial extension till May 4, which has now been push by an additional 18 days. The group, backed by billionaire investor Carl Icahn with a 39% stake, said it aimed to “develop a financing strategy and structure that better reflects the economic impact” of the crisis, in a filing with the SEC.

Germany’s constitutional court has threatened to block fresh purchases of German bonds through the European Central Bank’s flagship stimulus programme, potentially weakening the bloc’s monetary policy response to the coronavirus crisis. The bond-buying programme has long been controversial in Germany, where critics argue the central bank has exceeded its mandate by illegally financing governments and exposing taxpayers to potential losses. Ruling in a long-running case about the legality of the bond-buying, the court in Karlsruhe said the German government and parliament had “a duty to take active steps against” QE “in its current form”. The euro fell 0.7 per cent against the dollar — its lowest level in a week — and the spread between 10-year Italian and German borrowing costs — a key measure of country risk in the eurozone — widened by 0.2 percentage points to 2.5 per cent. 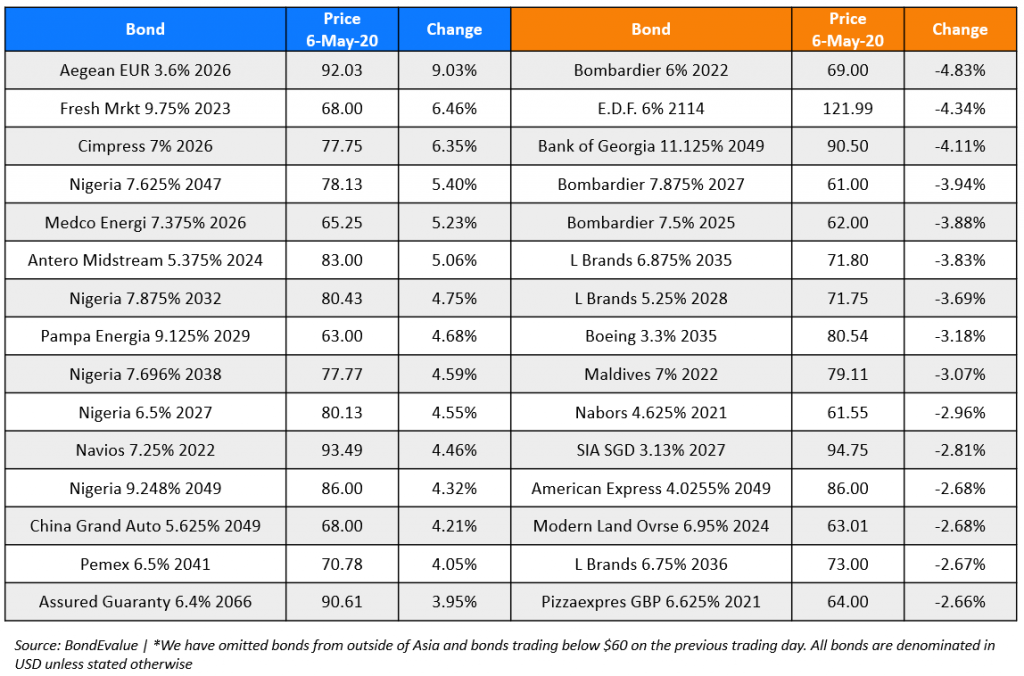