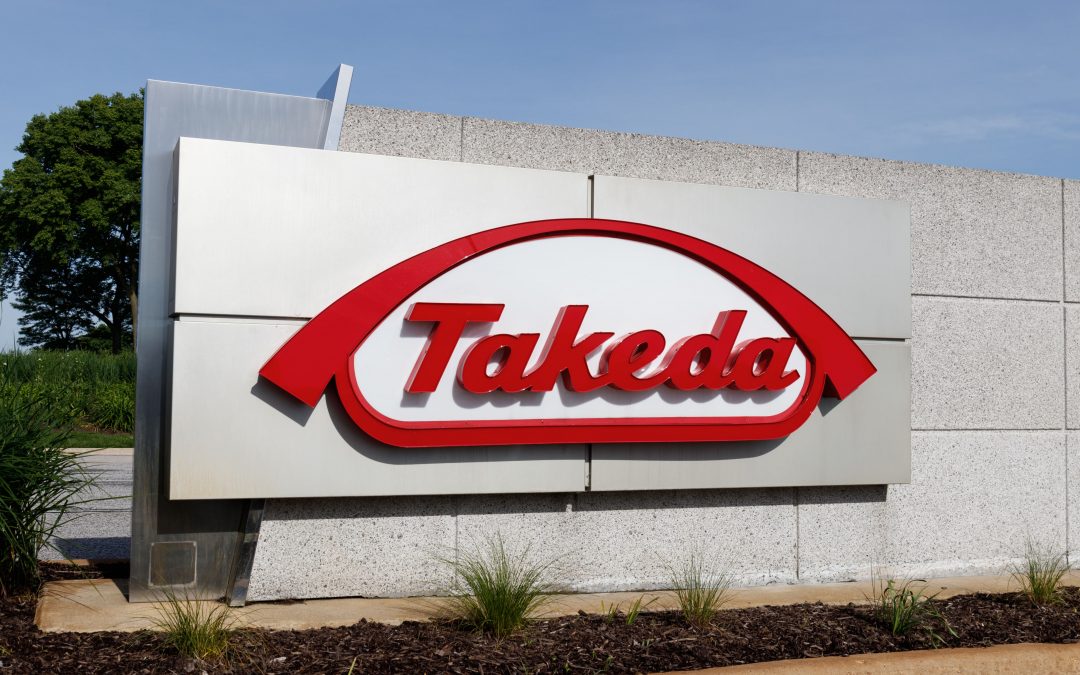 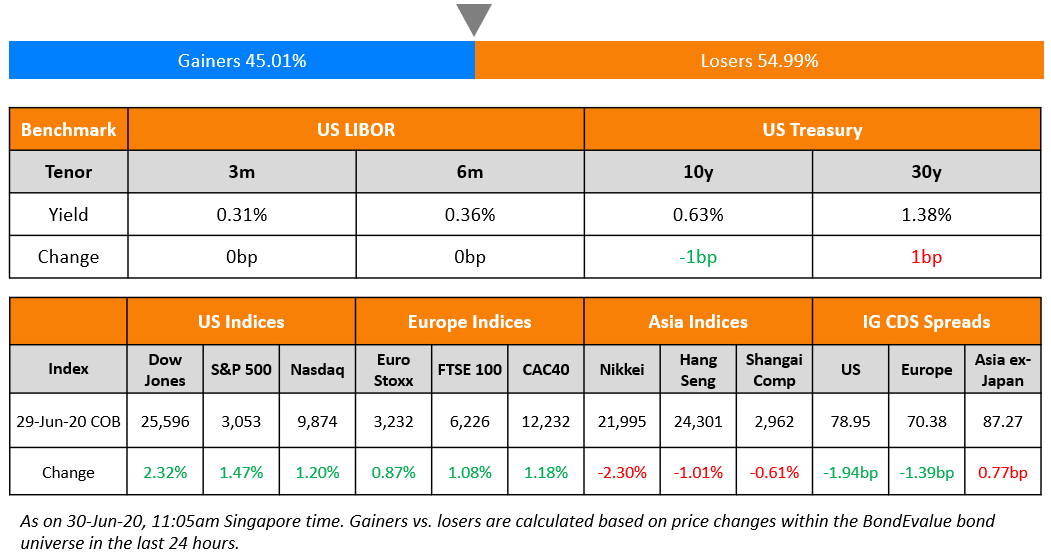 Wall Street rallied overnight despite no positive news except for US pending home sales, which rose by 44.3% month on month. Concerns over the virus still remain, but it looks like the bears in the market are still at bay. The Fed launched its Primary Market Corporate Credit Facility (PMCCF), but as we reported earlier, the qualifying list of issuers need to have held investment grade ratings in March. There is also a 100bp facility fee and the issuer needs to indicate that they are unable to raise financing from traditional sources. While we do not expect a huge pickup of the PMCCF, the Fed support is helping market confidence and discouraging the bears who see the virus as a bigger threat. It was also reported that the Democratic nominee for US President Joe Biden had told donors he would reverse President Trump’s tax cuts if elected. The US treasury yield curve bull-steepened (Term of the day, explained below) a couple of basic points. Asian markets are opening higher following the overnight gains. 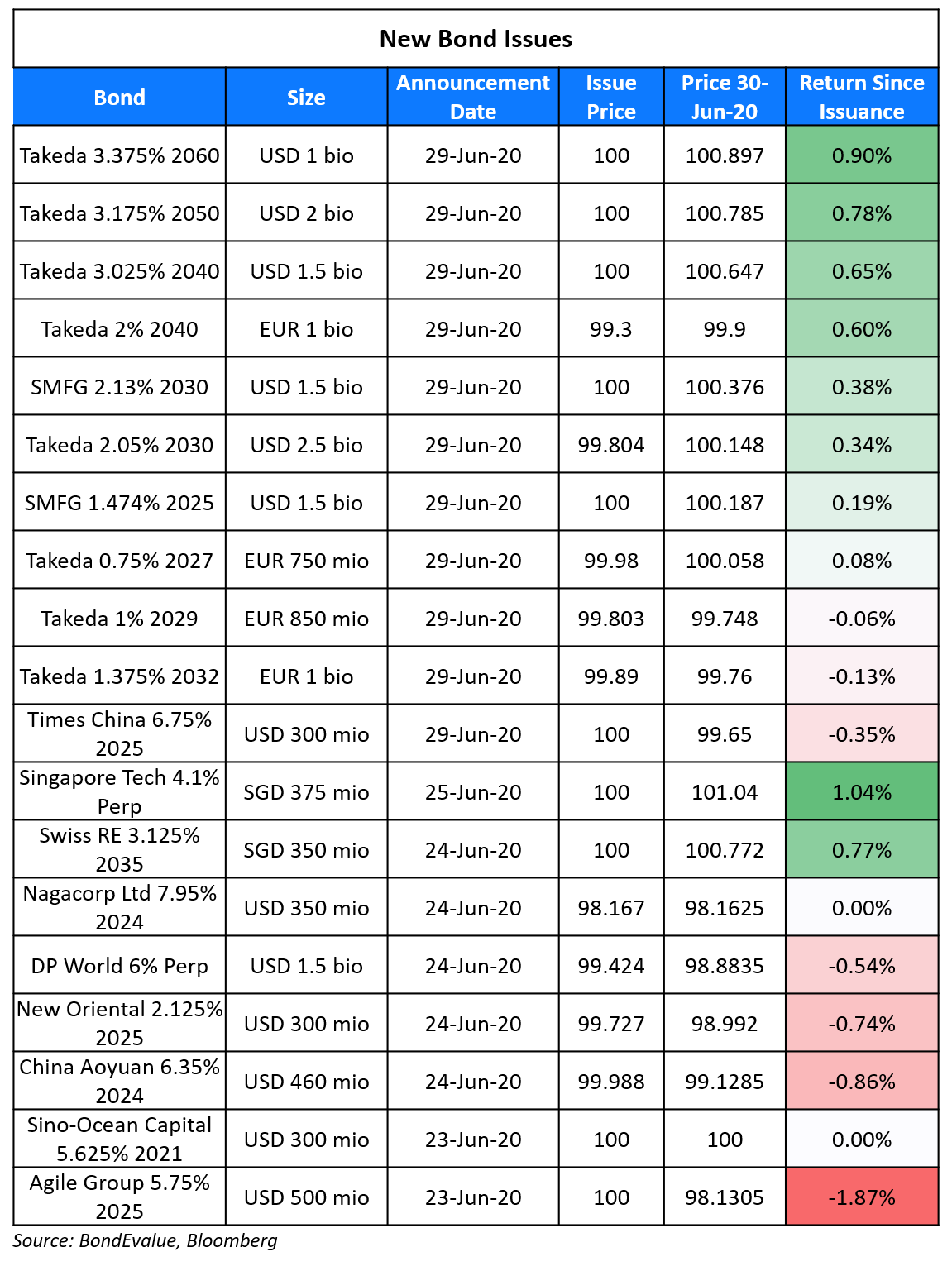 Sarawak Outlook Revised To Negative After Similar Action On The Sovereign; Ratings Affirmed

Japan-based Takeda Pharmaceutical raised a massive $11bn via a sale of dollar and euro-denominated bonds to refinance debt issued to fund its purchase of Shire. It raised $7bn via dollar bonds and €3.6bn via euro bonds, details listed in the table below.

The new bonds are expected to be rated Baa2 by Moody’s, in line with the issuer rating. The euro tranche received final orders worth €6.25bn, 1.7x issue size. Orderbook details were not available for the dollar tranche at the time of writing. The new bond issue came along with an announcement of an expected operating loss of $200mn related to Novartis AG’s decision to withdraw a marketing application for the dry-eye drug Xiidra.

Boeing has been in the news for its 737 Max fleet ever since it got grounded in March 2019 following the death of 346 people in two crashes involving a Lion Air Flight in Oct 2018 and Ethiopian Airlines in Mar 2019. The aircraft manufacturer has witnessed a slew of lawsuits as well as order cancellations, which hit its top line as well as the bottom line very hard. The onset of the pandemic has exacerbated issues for the company. However, amid the uncertainty, the Boeing has been trying hard to get its Max 737 fleet airborne. On Monday, the OEM managed to conclude the first flight test after clearance from the US Federal Aviation Administration (FAA). Although there is still some time for the fleet to get back to operations, this flight test is an important benchmark as it is the first step towards ending the 737 Max fleets’ grounding. With the first test flight complete, there is hope that the fleet could once again be airborne by September and start generating cash after it lost ~$20bn in grounding costs. Boeing’s bonds have been steadily rising since March-lows. 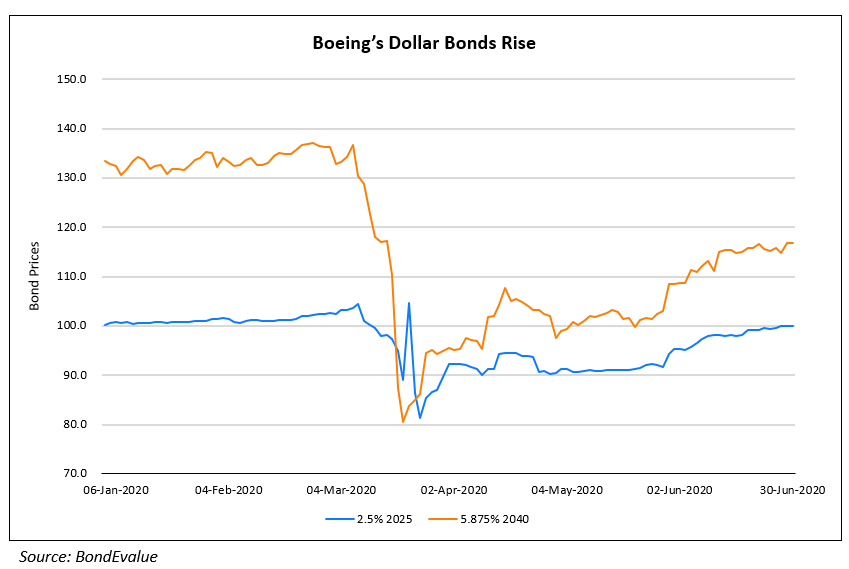 The small island nation of Maldives is planning to tap the international bond markets, this time with a sukuk issuance. President Ibrahim Mohamed Solih announced at a press conference last week that it plans to raise $300mn worth of sukuk to combat the negative impact of the pandemic. Maldives, which derives 30% of its GDP from tourism, has seen its economy come to a standstill on the back of global lockdowns and suspension of international flights. This led Fitch to downgrade Maldives to B from B+ with a negative outlook on March 30, and Moody’s to downgrade it to B3 from B2 on May 21, maintaining its negative outlook. Maldives’ 7% $250mn bonds due 2022 fell 4 points to close at 76.05 cents on the dollar on the secondary markets yesterday. 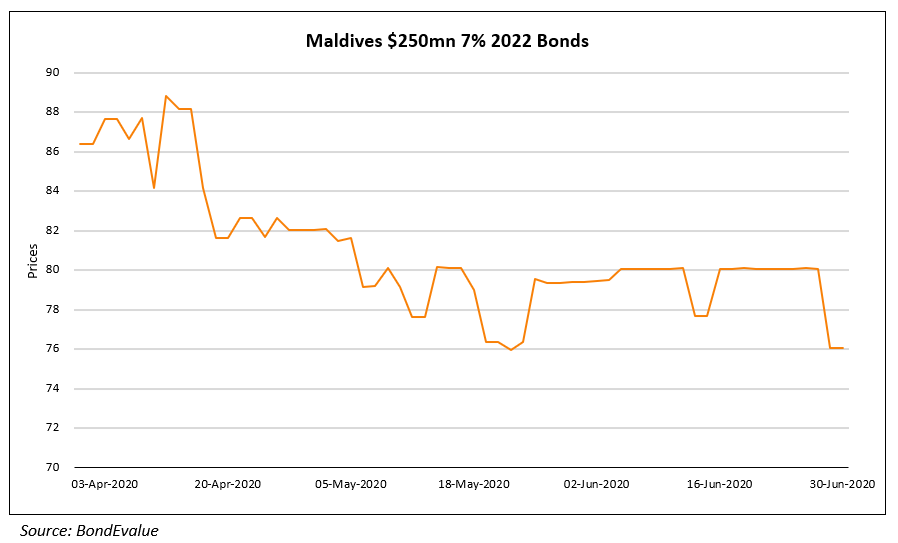 Investment banks pocketed fees of a record $57bn in the first half of this year on the back of massive debt issuance by corporates to combat the effects of the pandemic. Fundraising by Ford, Carnival and Boeing were among the most lucrative deals that yielded multi-million-dollar paydays for Wall Street banks. New bond issuance took-off after the Fed announced its stimulus measures that include purchasing bonds from the primary and secondary markets to support corporates amid the pandemic. Total investment banking fees are up 9% this year, which includes a 30% rise in revenues from underwriting bonds and a 37% rise in fees tied to stock sales, according to Refinitiv. David Solomun, CEO of Goldman Sachs said that the bank has benefited from accelerated capital raises, adding, “The more interesting question is trying to guess as to how this will . . . play out over the next six to 12 months and that’s harder to say because there’s still a lot of uncertainty.”

Petra Diamond Up for Sale as It Battles Debt

The lackluster demand for diamonds has forced Petra Diamond to put itself up for sale. The London listed African miner, who is famous for two jewels in the British crown had failed to make an interest payment on its $650mn bond last month. Reuters had reported on April 22 that the company had plans to restructure its $650mn debt as it faced challenges due to reduced demand, which is stemmed in part due to the cheaper lab grown diamonds and accentuated by the pandemic. Weak diamond prices, difficulties in operating the Williamson mine in Tanzania as well as increased debts following investment in Cullinan mines and Finsch pose mounting challenges to pay off the $650mn bonds maturing in 2022. As per an analyst, finding a suitor for the sale of mines at a time when supply lines have collapsed will be challenging. Another option available to the miner could be a debt-for equity swap. Its 7.25% bonds due in 2022 are currently trading at 41.5 cents on the dollar.

Bull Steepening refers to a change in the yield curve where short-end rates move down faster than long-end rates. This not only has a steepening effect on the entire yield curve but also has a net effect of interest rates moving lower and bond prices moving higher.

On resurgence of the US Economy while Containing the Pandemic – Jerome Powell , Federal Reserve Chair

“We have entered an important new phase and have done so sooner than expected” said the Fed Chair on Tuesday while addressing the House. “The path forward for the economy is extraordinarily uncertain and will depend in large part on our success in containing the virus. A full recovery is unlikely until people are confident that it is safe to re-engage in a broad range of activities”. “The path forward will also depend on the policy actions taken at all levels of government to provide relief and to support the recovery for as long as needed” added Powel while stressing the need to contain the ongoing pandemic while the US economy bounces back to normalcy.

Wells Fargo & Co plans to cut its dividend. This was widely expected after the Fed announced restrictions on payouts using a formula based on earnings. “There remains great uncertainty in the path of the economic recovery and though it’s difficult to accurately predict the ultimate impact on our credit portfolio, our economic assumptions have changed significantly since last quarter.” Charlie Schraf said Monday.

There were concerns on the European Central Bank’s bond buying efforts while there is a high possibility of corporate defaults . “Liquidity does not equal solvency,” said Patrick Perret-Green and added that Europe’s “sclerotic banking system also owns vast quantities of ‘junk’ government bonds, laden with bad loans that has yet to see a wave of delinquencies.” 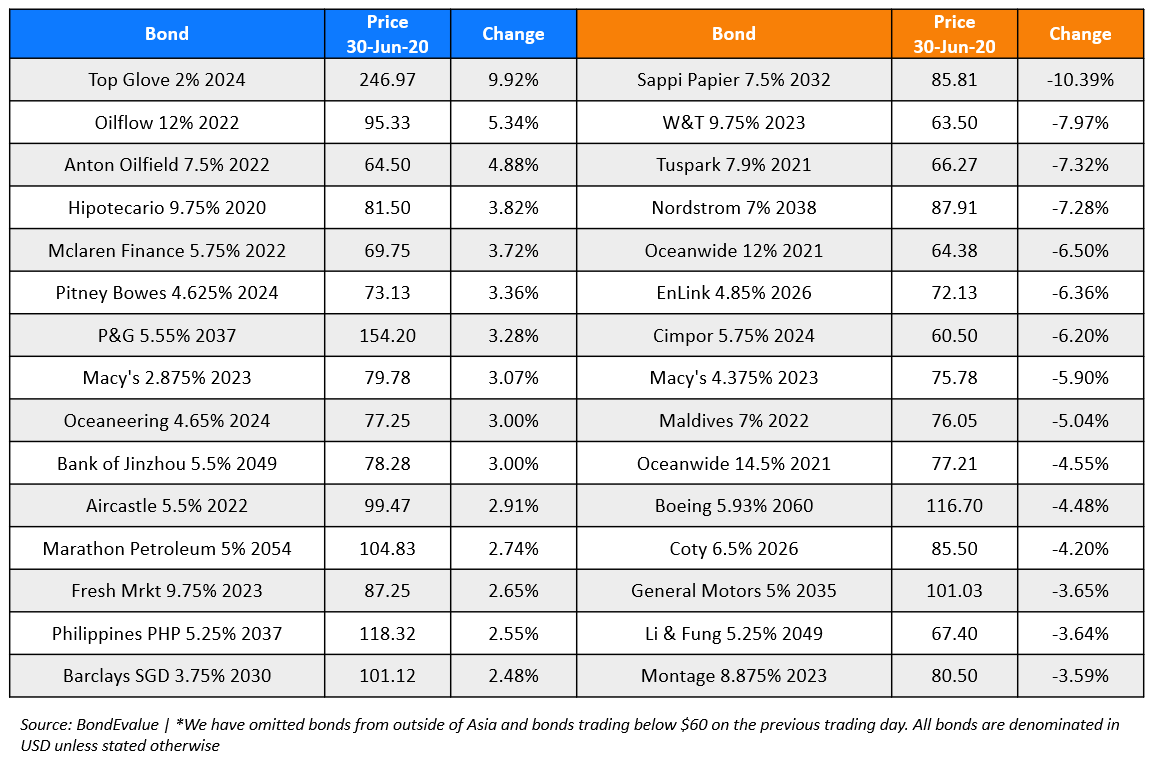