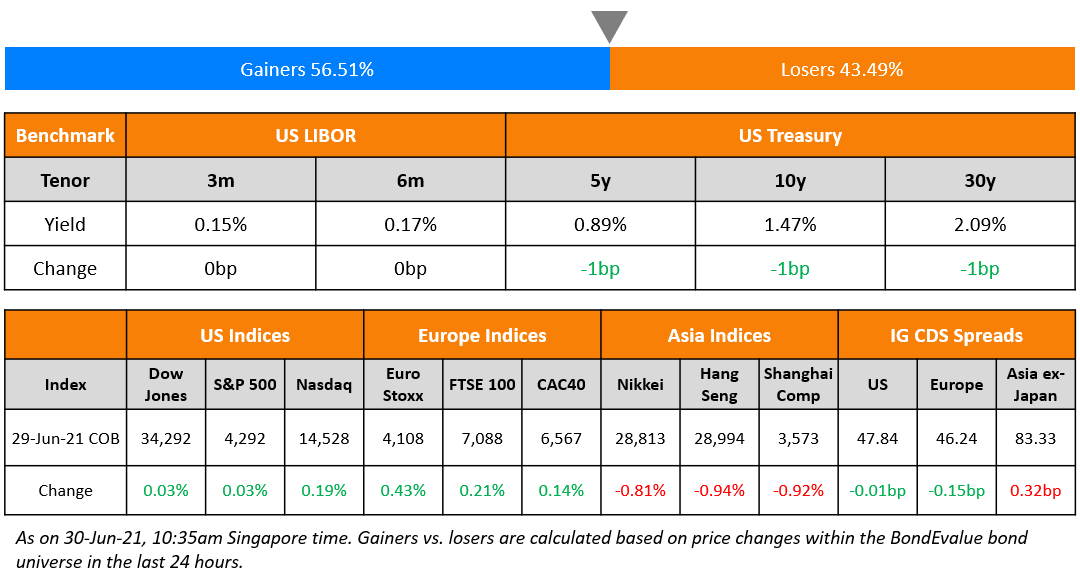 US markets ended slightly higher – Nasdaq up 0.2% and S&P largely flat. The Consumer Confidence index was up 7.3 points in June to 127.3, the highest reading since the start of the pandemic and well above the 119 market forecast. IT continued its upward rally and was up 0.7% while Energy and Communication were down 0.5%.  US 10Y Treasury yields were slightly tighter at 1.47%. Euro zone consumer inflation expectations for June stood at 27.1, up 4.9 vs. May and economic sentiment rose 3.4 points MoM to 117.9 vs. estimates of 116.5. European markets notched modest gains – DAX up 0.9%, CAC up 0.2% and FTSE up 0.1%. US IG and HY CDS spreads were flat. EU main and crossover CDS tightened 0.2bp and 0.4bp respectively. Saudi TASI and Abu Dhabi’s ADX were up 0.4% and 0.2% respectively. Brazil’s Bovespa was marginally down 0.1%. Asian markets are slightly higher– Singapore’s STI up 0.9%, Shanghai and Nikkei up 0.1%. Asia ex-Japan CDS spreads were 0.3bp wider. 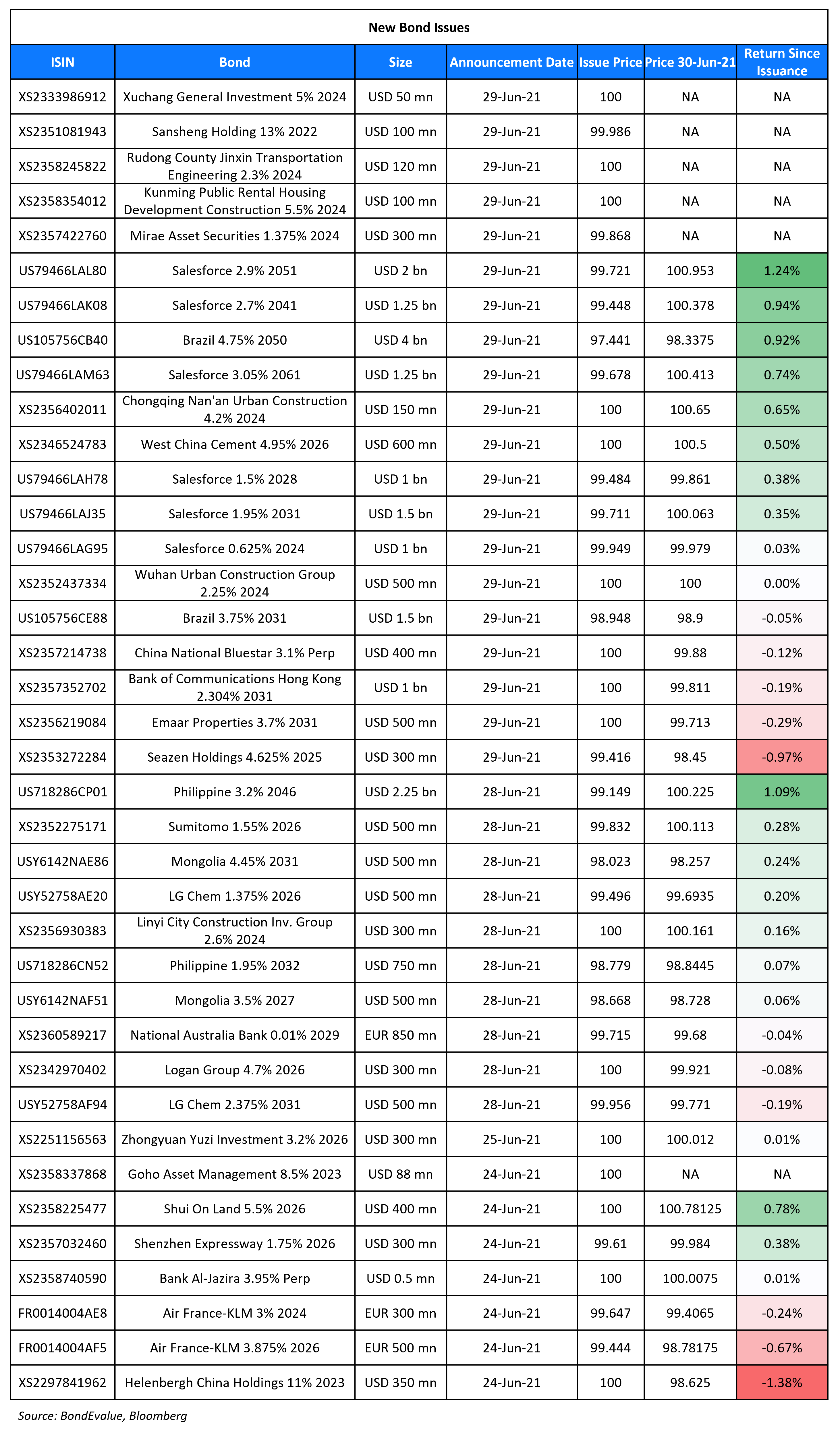 The bonds have expected ratings of A2/A and are mandatorily redeemable. Proceeds will be used to partially fund cash consideration of their acquisition of Slack Technologies. Proceeds from the sustainability note will be used to (re)finance in whole/part new or existing green or social projects meeting certain eligibility criteria and the remainder invested in cash, cash equivalents, and/or high-quality marketable securities.

China National Bluestar raised $400mn via a Perpetual non-call 3Y (PerpNC3) bond at a yield of 3.1%, 55bp inside initial guidance of 3.65% area. The bonds have expected ratings of Baa3/BBB and received orders over $3.1bn, 7.8x issue size. APAC took 98% and EMEA 2%. Fund and Asset managers/Hedge Funds/Insurance companies got 60%, Sovereign Wealth Funds/Corporates 24%, Banks 15% and PBs 1%. Coupons will reset to the 3Y Treasury yield + initial spread of 263.4bp and the bonds have a 300bp step-up if not called on the first call date. Proceeds will be used for debt refinancing, working capital and general corporate purposes. The company is a unit of ChemChina and this is its first dollar bond since the state-owned parent was left out of Biden’s list of companies to be banned from receiving US investments. The bonds were priced 13bp above their 3.875% Perps callable in June 2023 that yield 2.97% in secondary markets.

Bank of Communications (Hong Kong) raised $1bn via a 10Y non-call 5Y (10NC5) Tier 2 bond at a yield of 2.304%, 35bp inside the initial guidance of T+175bp area. The bonds have expected ratings of BBB/BBB+ and received final orders of over $2.8bn, 2.8x the issue size. Asia took 99% and EMEA 1%. Banks and financial institutions took 40%, fund/ asset managers 53% and insurers, sovereign wealth funds and others 7%. The bond will be permanently written-off if the issuer is declared to be non-viable by the monetary authority. Proceeds will be used to strengthen the issuer’s capital base and fund business development.

West China Cement raised $600mn via 5Y non-call 3Y (5NC3) bond at a yield of 4.95%, 50bp inside the initial guidance of 5.45% area. The bonds have expected ratings of Ba2/BB and received orders over $3.9bn, 6.5x the issue size. The bonds will be guaranteed by certain of the company’s wholly owned overseas subsidiaries. Proceeds will be used for refinancing, working capital and general corporate purposes, including overseas expansion and investment in Africa.

Mirae Asset Securities raised $300mn via a 3Y green bond at a yield of 1.42%, 30bp inside the initial guidance of T+125bp area. The bonds have expected ratings of Baa2/BBB and received orders over $1.4bn, 4.7x the issue size.  Asia took 96% and the rest went to EMEA. Asset/fund managers bought 80%, banks 14%, sovereigns/supranationals/agencies/pension funds/insurers bought 5% and PBss 1%. Proceeds will be used for green eligible projects under the Korean securities firm’s green, social and sustainability bond framework.

Wuhan Urban Construction Group raised $500mn via a 3Y sustainability bond at a yield of 2.25%, 50bp inside the initial guidance of 2.75% area. The bonds have expected ratings of Baa2/BBB+ and received orders over $3bn, 6x the issue size. Proceeds will be used for offshore debt refinancing.

Chongqing NanAn Urban Construction & Development (Group) raised $150mn via a 3Y bond at a yield of 4.2%, 50bp inside the initial guidance of 4.7% area. The bonds have expected ratings of BBB and received orders over $1bn, 6.7x the issue size. Proceeds will be used for offshore debt refinancing. The bonds were priced at a new issue premium of 32bp over their 4.66% 2024s that yield 3.88% in secondary markets.

Rudong County Jinxin Transportation Engineering raised $120mn via a 3Y credit-enhanced bond at a yield of 2.3%, 20bp inside initial guidance of 2.5% area. The bonds are unrated. Proceeds will be used for debt refinancing and working capital purposes. The issuer is a local government financing vehicle (LGFV) of Rudong county in Jiangsu province and focuses on infrastructure construction and land development.

Kunming Public Rental Housing Development Construction raised $100mn via a 3Y bond at a yield of 5.5%, 45bp inside initial guidance of 5.95% area. The bonds are unrated. Proceeds will be used for debt repayment and general corporate purposes. The issuer is 65% owned by Kunming SASAC, 28% by Kunming Land Development Investment and Operations, and 7% by Yunnan Department of Finance.

Sansheng Holdings raised $100mn via a 364-day note at a yield of 13%. The bonds are unrated. Proceeds will be used for debt refinancing and general corporate purposes.

Xucheng General Investment raised $50mn via a 3Y bond at a yield of 5%, 30bp inside initial guidance of 5.3% area. The bonds were unrated. The issuer is a core municipal infrastructure construction and operation entity in Xuchang city, Henan province. Proceeds from the issue will be used for project construction and general corporate purposes.

On the long way to go for US labour market recovery
Thomas Barkin, Federal Reserve Bank of Richmond President
“I still think we’ve got a long way to go on the job front.” “I think you can argue reasonably compellingly, we’ve made substantial further progress on the inflation.” On employment, “it just feels like further progress, but doesn’t feel like — to me — like substantial further progress.”
Neel Kashkari, Fed Minneapolis President
“I’m anticipating a very strong labor-market recovery in the fall.” “The economy is positioned for a very strong recovery but we need to make sure that everybody who wants a job is able to find a job.”

“The unemployment rate would have to drop fairly substantially, or inflation would have to really continue at a very high rate, before we would take seriously a rate hike in 2022, but I’m not ruling it out.” “We are now in a different phase of economic policy, and so it’s appropriate to start thinking about pulling back on some of the stimulus.” “I think everybody anticipates that tapering could move up earlier than when they originally thought,” Waller said. “Whether that’s this year, we’ll see, but it certainly could.” “I myself would like to see tapering over before we consider raising rates; therefore if you think you may have to raise rates in late ‘22 or early ‘23, you pretty much want to get tapering done by the end of next year if possible.”
On rising China bond yields prompting fears over coming surge in defaults
Shuncheng Zhang, Fitch analyst
“The secondary market pricing has already factored in, to some extent, those rising default risks in those weaker regions.” “Some regions — like Yunnan and Tianjin — they have seen a pretty notable surge in the secondary market yields.”
According to S&P analysts
“SOE support is more selective, and tolerance for defaults is rising.” “This means an increased willingness to allow unprofitable SOEs to go bankrupt.”
On Hong Kong’s plans to triple Silver Bond offering and lower minimum eligible age – Christopher Hui Ching-yu, Hong Kong Secretary for Financial Services and the Treasury
“Lowering the eligible age for subscription to 60 will not only allow more citizens to benefit from steady returns in the current investment environment of low interest rates clouded by uncertainties, but it will also encourage the financial sector to tap into the immense potential of the silver market.”
On Mexico’s Pemex unlikely to get credit rating upgrade – according to Moody’s Investors Service
The Ba2 credit rating assumes “very high government support in case of need and very high default correlation between Pemex and the government of Mexico.” “An upgrade is unlikely given the negative outlook for Mexico’s Baa1 rating and Moody’s expectations for continued negative free cash flow for Pemex.” 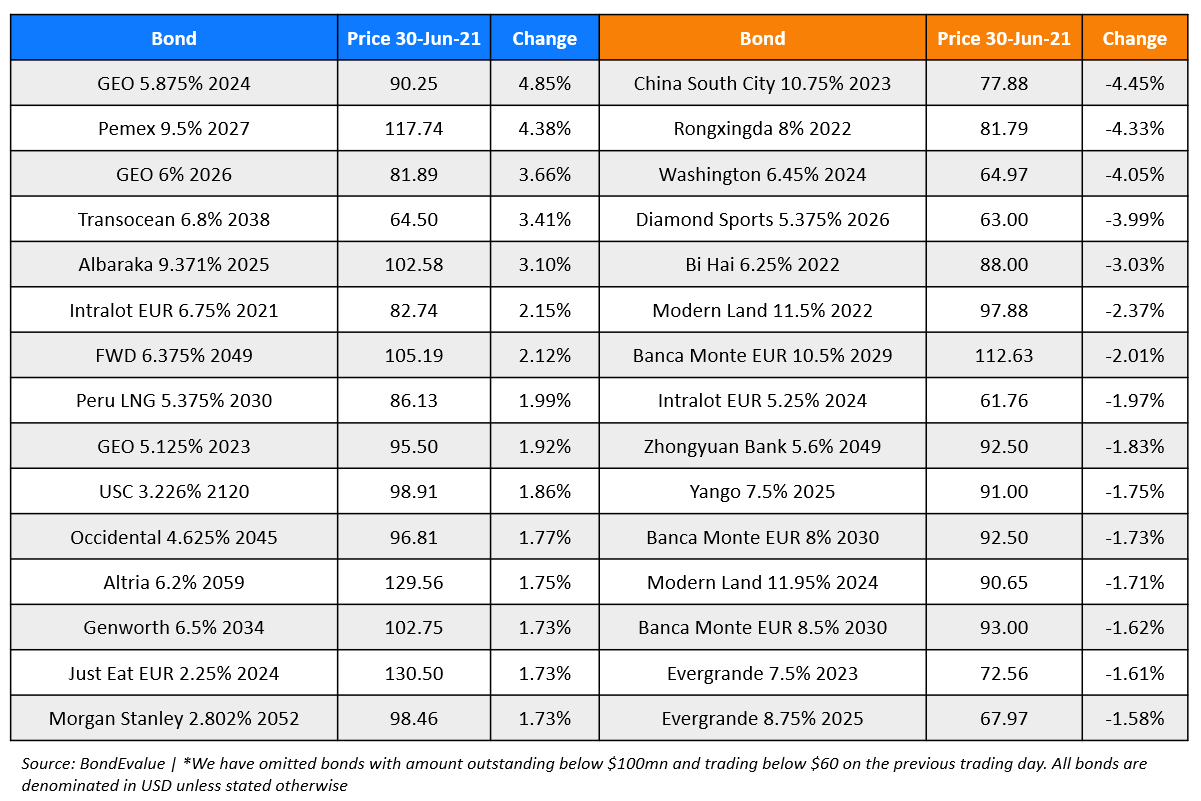