S&P Downgrades Sri Lanka to CCC+ From B- 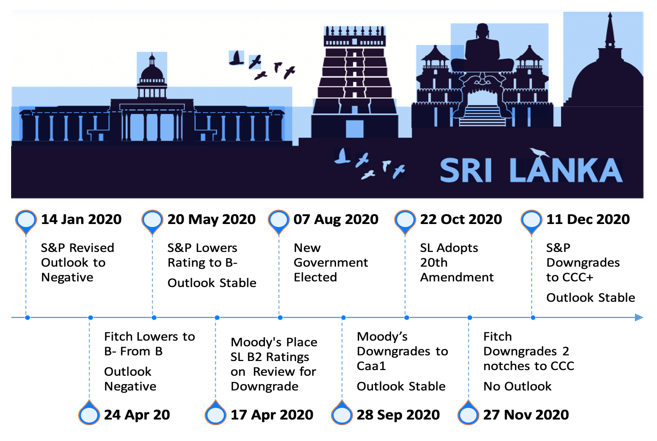 Rating agency S&P downgraded the Sri Lankan sovereign rating to CCC+ from B- with a stable outlook. They cited that with the implementation of expansionary budget measures in Sri Lanka, the fiscal position would materially deteriorate over the next few years along with insufficient existing funding support which could lead to financing risks. The rating agency also said that if external buffers decline substantially more than currently forecasted, the rating could be downgraded further. The stable outlook reflects that Sri Lanka is relatively balanced over the next 12 months. Listed below are some details on the rationale for the downgrade:

Sri Lanka recently got a double notch downgrade by Fitch. With S&P’s rating downgrade to CCC+, all the three major rating agencies have brought the sovereign to the ‘CCC’ equivalent bracket with Moody’s and Fitch rating Sri Lanka at Caa1 and CCC respectively. Sri Lanka’s dollar bonds were largely stable and it remains to be seen how they react –  7.55% 2030s around 58.1 and 6.25% 2021s around 89.