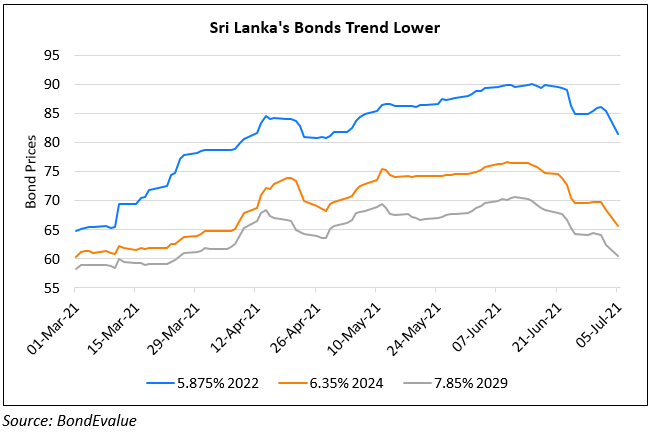 The Sri Lanka government ruled out plans of a deal with the IMF for debt restructuring, adding that there were alternatives. Ajith Cabraal, the State Minister of Money & Capital Markets said that the economy was not on the brink of collapsing and added, “This is exactly what the opposition wishes for. Once the economy is bankrupt, they believe they can capitalize on it to get back to power. Despite economy wizardry claimed by the opposition, the growth rate slowed from 7.4% to 2.1% during their time between 2015 and 2019.” Cabraal added that Sri Lanka may not hit GDP growth of 6% but may hit 5% this year.

Meanwhile, Sri Lanka’s dollar bonds slipped with the nation’s $1bn 6.25% bonds due July 27, 2021 approaching redemption. The bonds due at the end of this month have been stable, trading at 98.2 with the nation allaying concerns on the maturing bond saying that they will repay the amount. “Sri Lanka is clearly in a difficult situation, it is facing a major balance of payments crisis…It faces a weight of external debts falling due and has limited FX reserve coverage. The solution would appear to be to go to the IMF – that would likely be the least painful option.” said Tim Ash, strategist at BlueBay Asset Management.