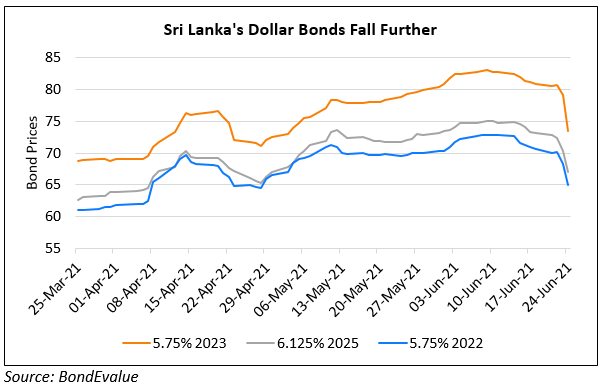 Sri Lanka’s dollar bonds fell upto 7% on Thursday after trending lower since the beginning of the week. Bloomberg notes that the nation’s ability to repay its debt is coming sharply into focus, as it nears the maturity date for its $1bn 6.25% bond due July 27. While the upcoming bond remained stable, its 5.75% 2022s and 2023s fell 4 and 5.8 points respectively, their biggest drop since the peak of the pandemic. P.B. Jayasundera, Secretary to President Gotabaya Rajapaksa earlier this month said that they will honor the $1bn dollar bond payment due in July. Morgan Stanley recently turned negative on EM FX and credit, noting that the recent hawkish FOMC meeting has increased the threat of a taper
tantrum. Bloomberg adds that many investors in riskier debt globally are turning more risk averse as fears of rising inflation globally increases concerns of higher dollar funding costs that can punish borrowers like Sri Lanka an other frontier markets.