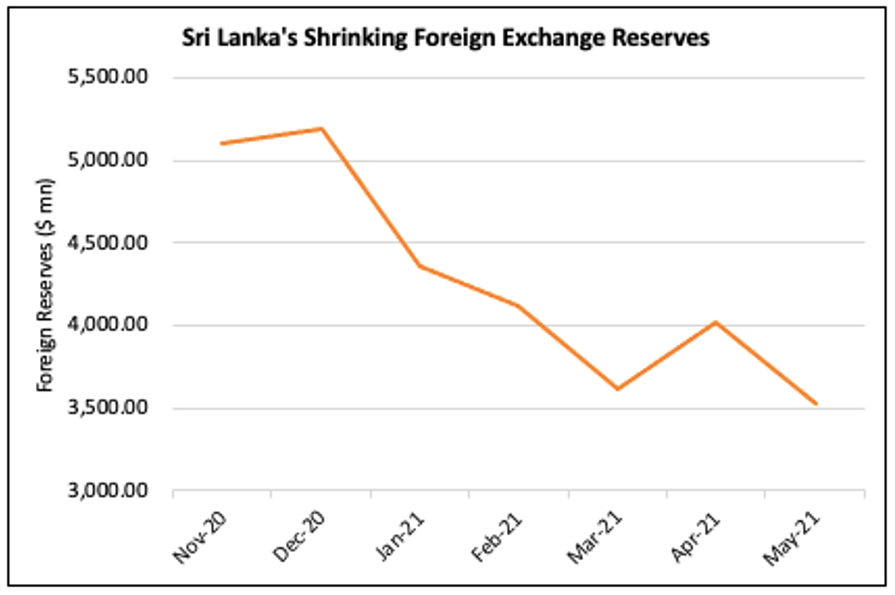 Sri Lanka’s Foreign Exchange Reserves fell to $3.5bn in May 2021 as per CEIC data vs. $4bn a month ago and are sufficient to cover only ~2 months of imports, leading to concerns among investors especially in the face of the upcoming debt maturities. The country has to repay dollar debt worth $1bn at the end of next month and $2.4bn by the end of this year. To allay the fears of the public at large and investors in particular, the central bank governor released a statement on Foreign Currency Liquidity in the Domestic Market on Monday where he revealed that the Gross Official Reserves stood at $4bn without considering the standby Swap agreement of ~$1.5bn with People’s Bank of China. He emphasized that despite short term fluctuations in the foreign reserves, Sri Lanka is focusing on managing its debt obligations and has adequate financing strategies in place, which include the following
The Governor said, “As a result of the measures taken by the Government and the Central Bank in the past 1 ½ years, the Government has been able to substantially reduce its foreign debt to GDP ratio to about 40% and the face value of foreign debt from $34.1bn at end 2019 to $32.2bn by end March 2021, while successfully meeting its maturing debt service obligations.”
Sri Lanka’s bonds were largely stable. It’s 6.25% 2021s maturing in July are trading at 98.5. Its 9.45% 2021s and 11.2% 2023s were trading above par at 101.21 and 110.09. However, its longer dated maturities are trading much below par. It’s 6.825% 2026s and 7.85% 2029s were trading at 65.5 and 64.5 respectively.
For the full story, click here