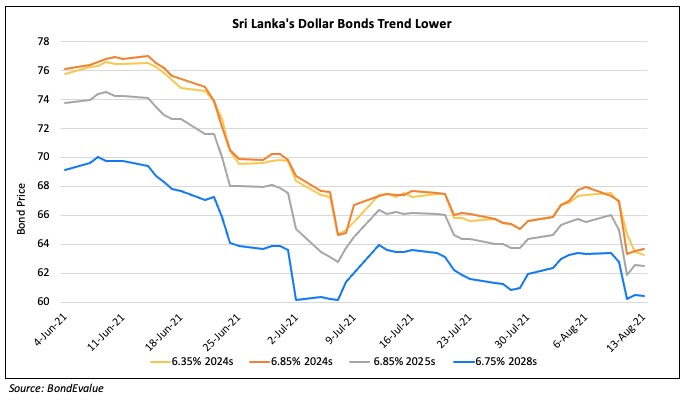 Sri Lanka’s dollar bonds have trended lower this week. While there is no clear reason for the fall, the fear of resurgence of the delta variant has the potential to delay the tourism recovery of the island nation, which relies on tourism for over 10% of its GDP (2019). The highly indebted nation has been hit hard by the pandemic and its foreign reserves have depleted 30% since the beginning of the year to $3.6bn as of end-June. Despite going through a rough patch, the nation has always repaid its debt on time, the latest being the repayment of its $1bn 6.25% 2021s last month. However, this would have also dented the already low forex reserves. The nation has managed its debt obligations by raising money through its bilateral ties with friendly nations including China, India and South Korea and its central bank had also revealed plans to raise $600mn-700mn through forex surrenders last month. The nation’s state minister for money and capital markets, Ajith Cabraal has reiterated on multiple occasions that the nation is committed to repaying its debt. These measures though need to be complemented by a reduction in its fiscal deficit. Due to the deteriorating financial position, the nation was put under review for downgrade by Moody’s on July 19 this year. It was downgraded to CCC+ by S&P, to CCC by Fitch and to Caa1 by Moody’s late last year.