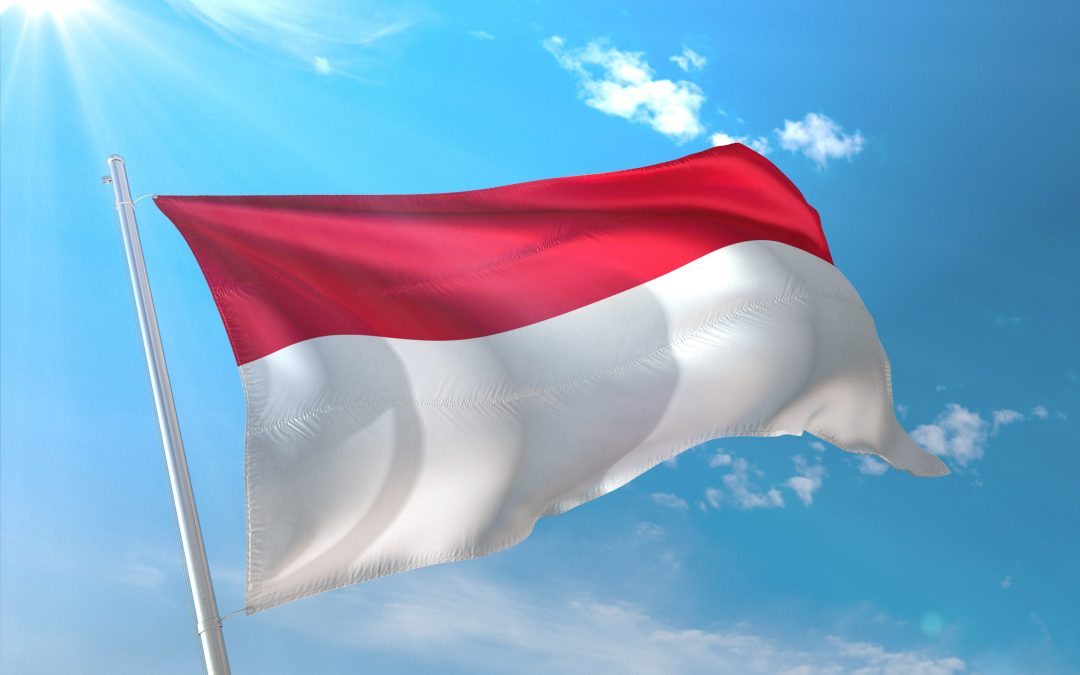 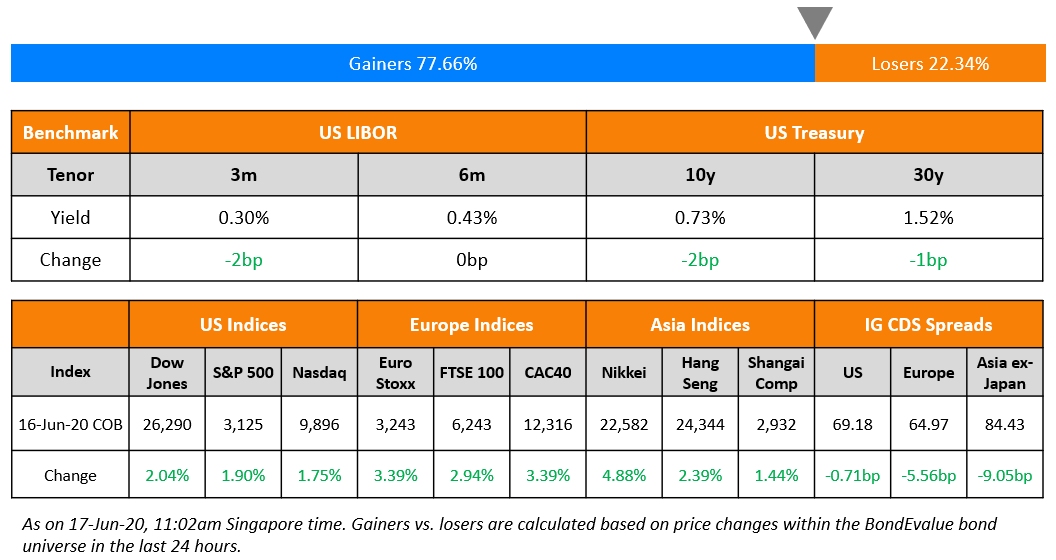 Markets rallied taking comfort from the Fed’s determined monetary and fiscal support and a record increase in the US May retail sales number which rebounded 17% vs an expected 8% increase. A new coronavirus drug with encouraging trial results also calmed fears regarding a second wave outbreak. European stocks posted their biggest jump in a month on the recovery optimism. Bond issuers rushed to raise capital after a quiet day on Monday. Asian dollar bond market had a big day with around $7bn in debt issued and spreads tightening after four days. US issuers saw $26bn in new deals and Europe’s primary market saw €13.1bn of new deals. Asian markets are opening a bit lower along with US index futures this morning. 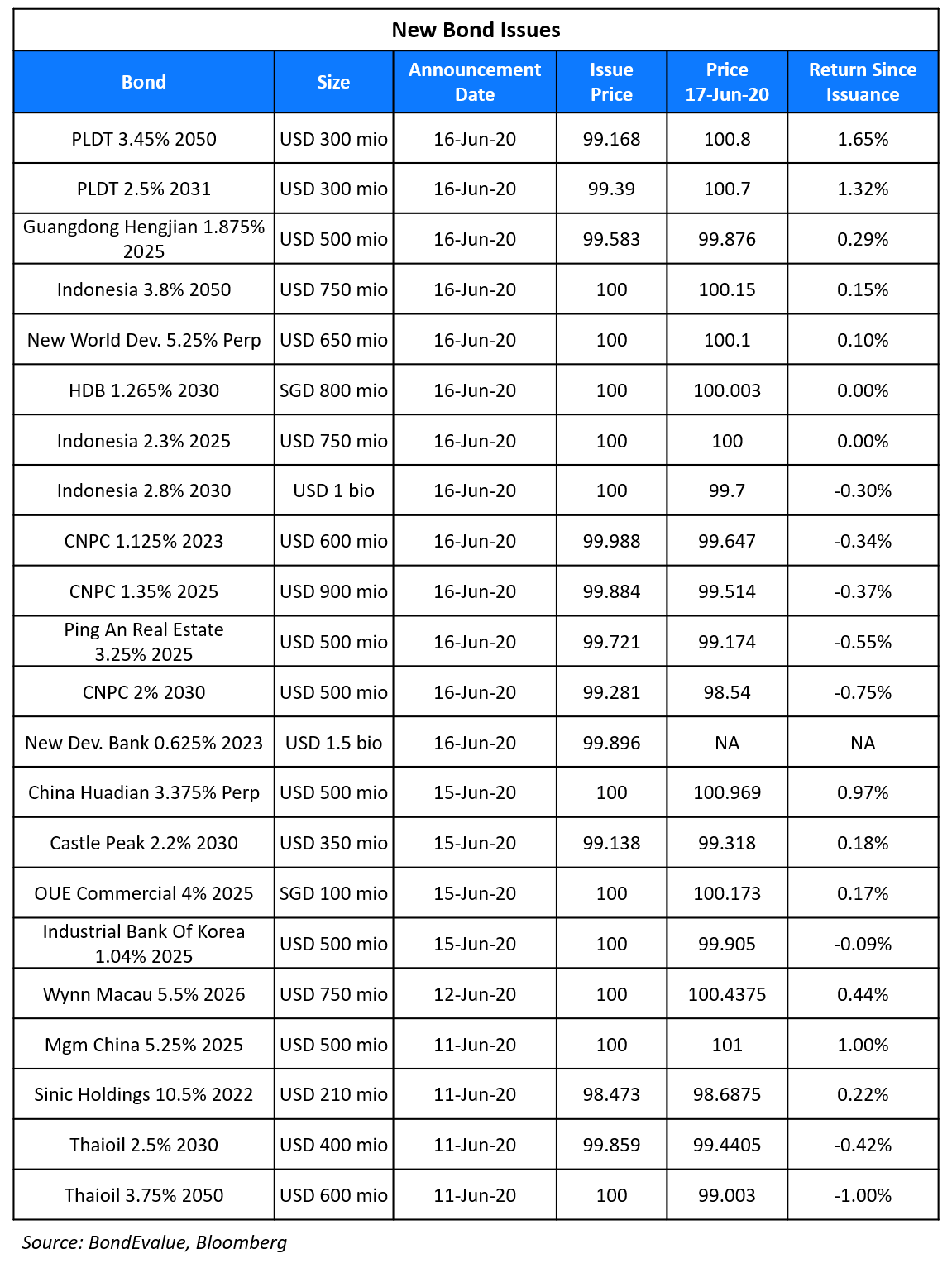 Indonesia returned to the dollar bond markets, this time with a $2.5bn three-tranche sukuk issuance. It raised:

Strong investor demand led all three tranches to price a massive 70bp inside initial guidance of 3%, 3.5% and 4.5% area respectively. The new sukuk, expected to be rated BBB, received total orders worth $16.66bn, 6.66x issue size. This issuance comes two months after it raised $4.3bn via 10/30/50Y bonds in April. The new 10Y and 30Y sukuk priced at a spread of ~205bp and ~228bp over Treasuries. This is significantly lower to the spread at issuance of the older 10Y and 30Y bonds issued in April at ~323bp and ~297bp over Treasuries. The table below lists dollar bond issuance from Asia ex-Middle East sovereigns in 2020.

US Fed Reserve vs. Bank of Japan Commentary on Their Respective Economies

The largest and third-largest economies of the world recently concluded their central bank policy meetings. Both central banks continued their accommodative monetary policy stance by announcing quantitative easing (Term of the day, explained below) measures. We have compiled the highlights and included quotes from the two central banks in the table below. 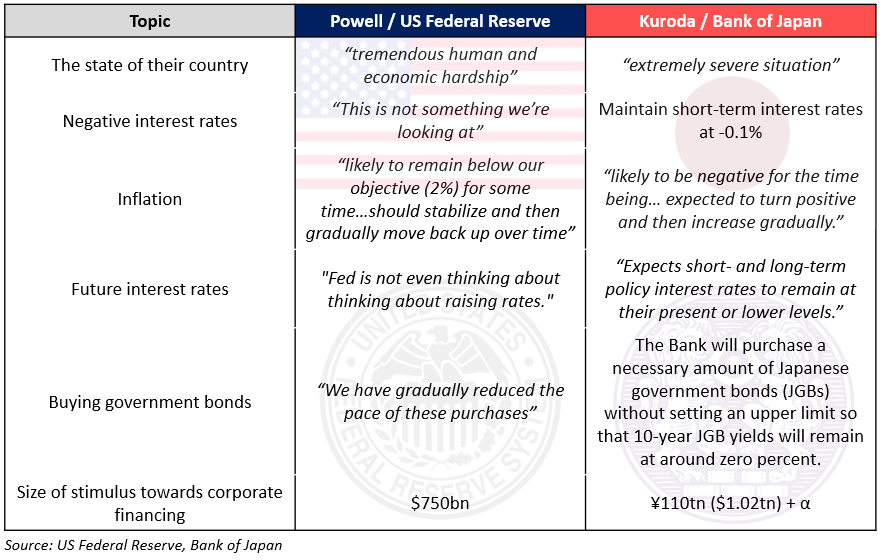 DP World has joined the bandwagon of the slew of corporates being downgraded. Fitch Ratings downgraded DP World Plc’s Long-Term IDR to BBB- from BBB and the Short-Term IDRs to F3 from F2 while revising the outlook to Stable. Formed in 2005, Dubai Ports World (DPW) is a Dubai based logistics company which specialises in cargo logistics, port terminal operations, maritime services and free trade zones. It is the fifth-largest container port operator globally with a 9% market share. Currently, the parent company of DPW, Port and Freezone World (FZE) has a 19.55% minority stake as it progresses to privatize DPW as per plans announced on February 17, 2020. Once the transaction is complete, Fitch expects the group’s leverage (Fitch adjusted net debt to EBITDAR) to increase to 8x in 2020 and will de-lever to ~6x by 2023/2024. The rating action comes as coronavirus has hugely impacted cargo mobility and volumes are expected to fall by ~20% in the current year. The company has cash on hand of $3.4bn as of 30 Apr 2020 and has committed credit facilities of ~$1.0bn, which are sufficient to cover the debt maturities over the next one to two years. DPW also has plans to expand capacity from 54mn TEUs to 57.5mn TEUs in the current year based on the overall market condition. Consolidated debt includes 20% in bank loans and 80% through bonds and loans raised/guaranteed by the parent company. The bonds of the company have been fairly stable despite the rating action.

In need of cash, Japanese technology conglomerate SoftBank is preparing to sell part of its stake in T-Mobile next week, which will amount to around $20bn. After having the worst fiscal year, they are selling their assets to buy back shares and fulfill their debt obligations. It is unclear who will purchase these T-Mobile shares from SoftBank, but there are speculations that Deutsche Telekom, which currently holds a more than 40% stake in T-Mobile is a good candidate because they want to maintain control of the company.

The Monetary Board of the Central Bank yesterday slashed the Statutory Reserve Ratio (SRR) by 200bp to 2%, injecting around Rs.115bn liquidity into the domestic money market. Hence, the total reduction in SRR in 2020 stands at 300bp, in addition to several other monetary easing measures already implemented. Following this measure to support the economy, Sri Lanka sovereign bonds traded higher yesterday, with its 5.75% and 6.85% bonds due 2022 and 2025 up by 0.21 and 0.62 points to trade at 74 and 64 cents on the dollar, respectively.

Quantitative easing (QE) is a form of unconventional monetary policy whereby a Central Bank purchases assets such as existing government bonds so as to pump money directly into the economy. This increase in money supply is meant to encourage financial institutions to lend more money to businesses and individuals. QE is regarded as a last resort to stimulate spending in an economy when a reduction in interest rates do not work alone. It also bears with it the risk of creating an inflationary pressure in the economy. Most major central banks in the world such as the US Fed, Bank of England, Bank of Japan and the ECB are all undertaking QE measures in a bid to help their respective economies fight the negative impact of the ongoing Covid-19 pandemic.

There is speculation that Bank of England will impose the yield-curve control policy to support the coronavirus hit economy. The success of the policy in Japan is debated among economists, but the BOE under Governor Andrew Bailey is running out of conventional tools and is exploring the possibility of negative-interest rates.

“If you have to think about what’s the most likely central bank to go down the route of yield-curve control, is it the BOE or the ECB, it’s got to be the BOE,” said George Buckley. “There’s a lot of risks around negative rates.” Right now, UK bond yields are already hovering close to their lowest levels in history.

More than a dozen central banks across emerging markets have bought local-currency government bonds or other assets. Alejo Czerwonko noted that such purchases differed slightly from the quantitative easing. But he said the policy, if used prudently, could help to buttress the countries’ recoveries by “safeguard the functioning of domestic bond markets”. Emerging and developing economies have been able to access international capital markets in droves since April, raising more than $83bn, according to data compiled by the Institute of International Finance.

The covid bonds launched in China to help fight the pandemic were a success. In less than a month, 106 covid bonds were sold in the domestic interbank bond market, raising Rmb100.1bn ($14bn), Winnd data shows.

Some bankers admit that the standards for China’s Covid-19 bonds are too low, allowing issuers to attach a label without really contributing much to the fight against the pandemic or alleviating its economic impact. “Most companies that have issued Covid-19 bonds belong to those basic industries that are tasked with maintaining the stable operation of the society,” a senior DCM banker at Bank of China says. “To make sure that these companies are operating normally is in itself supporting the prevention and control of the Covid-19 pandemic.” 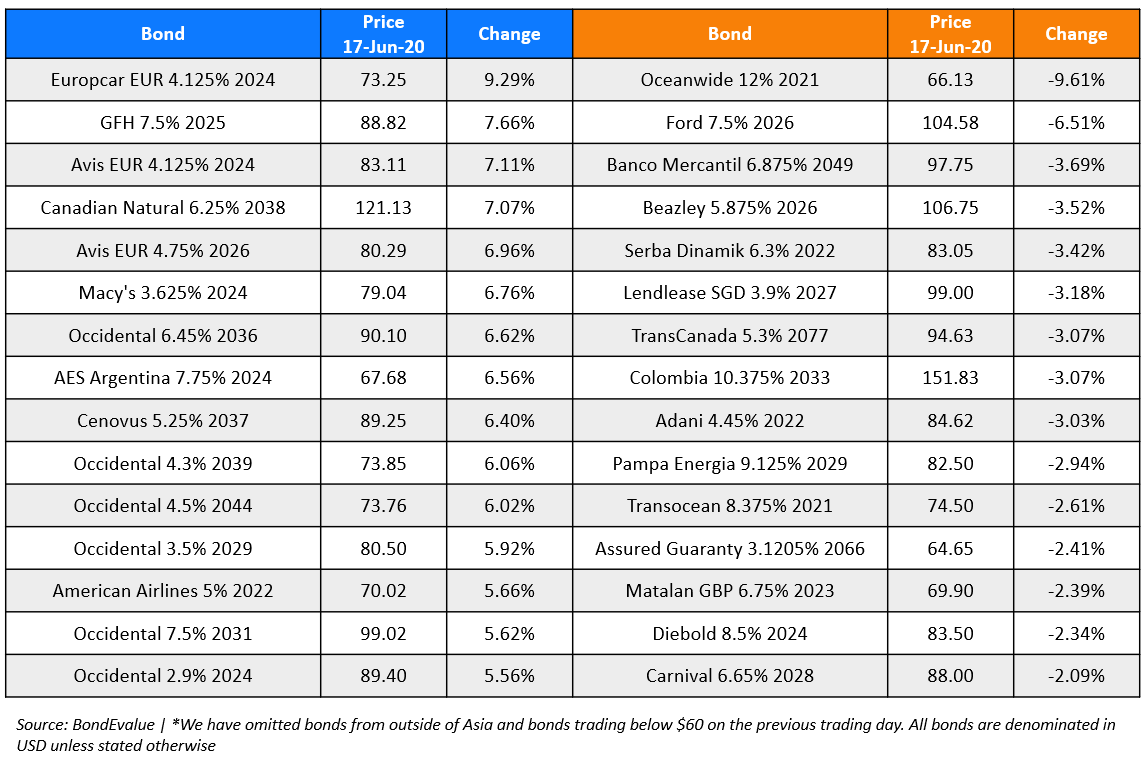