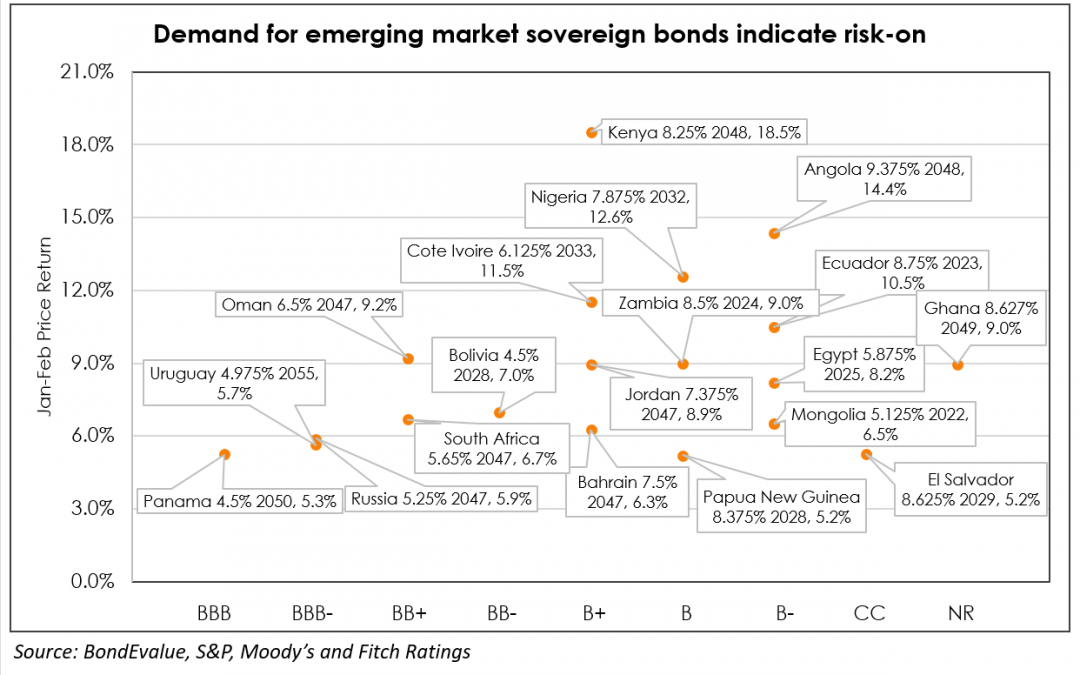 The upbeat sentiment continued for the Asian bond market, extending uncrystalized gains to US$ 48.82 billion in the new year (for US dollar denominated bonds in the BEV universe).

Themes that we had seen in January continued on into February, with investors happy to extend duration, go lower down the credit spectrum, and lap up perpetual instruments. The belief that some sort of trade deal would be agreed between the US and China, strong inflows into global bond funds, and the continued re-reiteration of patience from the US Fed has kept the party going for bond investors.

While the USD index has not declined as yet, the risk-on sentiment has led to hard currency sovereign bonds from frontier and emerging markets across Latin America, Africa, Middle East and Asia delivering strong price returns. The scatterplot below shows the two-month price return for USD sovereign bonds against their credit ratings.

Asia ex-Japan G3 currency bond issuance volume for the first two months of 2019 stood at US$55.3 billion, up 8.3% from the same period last year, making the tightening in credit spreads even more impressive. 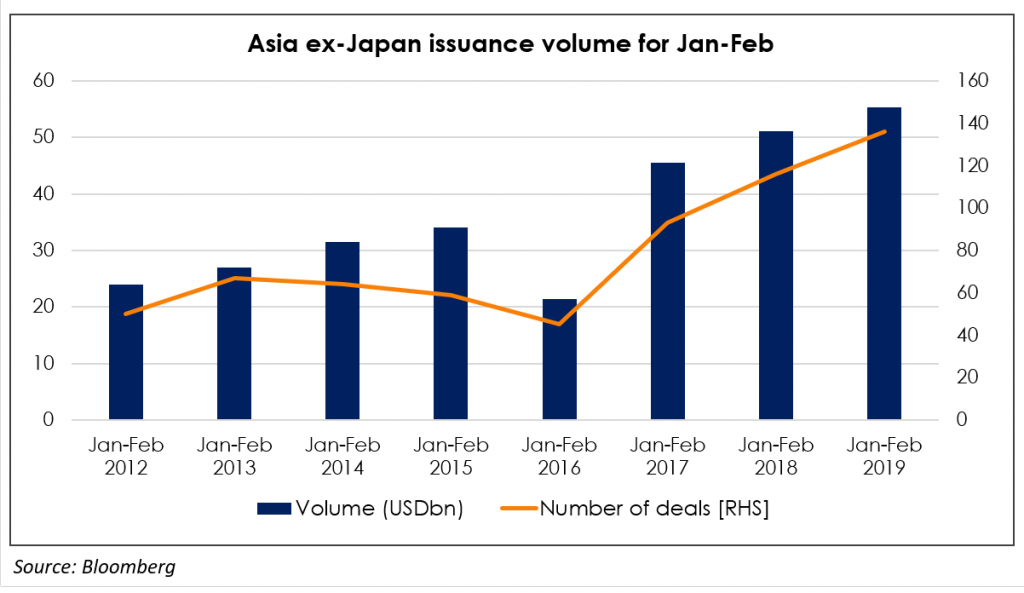 Of the US$26.8bn of issuance in the AEJ market in G3 currencies in February, US$21.6bn or 80.50% of the issuance came from Greater China. Chinese Real Estate companies took good advantage of the market sentiment, extending duration and increasing their issuance size via US$10.94bn of securities. Case in point was BB- (Fitch) rated Chinese property company Guangzhou R&F Properties, which priced a US$300mn 3NC2 bond at 9.125% on 18th January, and promptly came back to the market a month later on 20th February with a US$450mn 4NC3 bond at 8.125%, and a US$300mn 5NC3 bond at 8.625%. 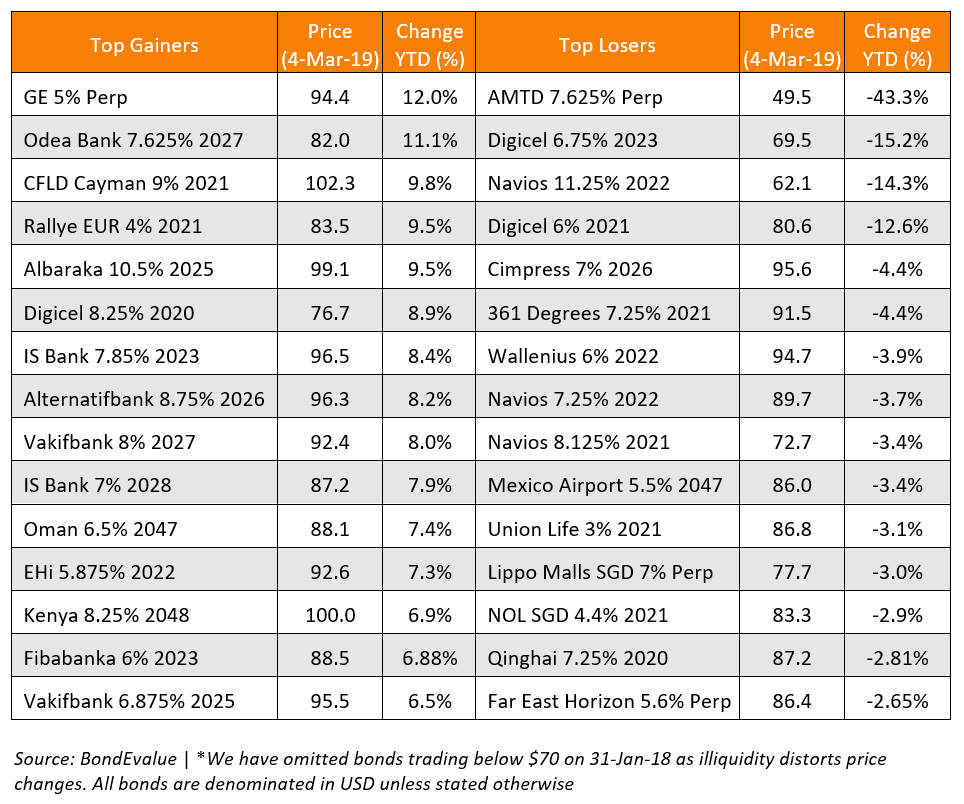 American conglomerate General Electric’s bonds rallied after it announced a deal to sell its biopharma business to Danaher Corp for US$ 21.4 billion. GE’s bonds were under pressure since October 2018 following credit rating downgrades, slash of its dividend and a change in leadership. The GE 5% Perp, now trading at 94, had fallen as low as 74 cents on the dollar in late November.

Many of our top gainers during the month are Turkish banks – Alternatifbank, Vakifbank, IS bank – despite inflation at over 20%, falling consumer confidence, and the expectation that Q4 GDP data this month will show that Turkey is falling further into recession after a 1.1% quarterly contraction in Q3. The Turkish Lira though has remained stable in the 5.25-5.31 range vs. the USD.

Jamaica based telecom operator Digicel’s longer dated bonds continued to face the heat as the company reported its third quarter earnings in the last week of February. The telecom company’s cash levels fell by almost two-thirds to US$96 million while debt levels rose to 6.8x EBITDA as of end 2018. A debt restructuring deal was announced in January that extended maturities on its bonds due 2020 and 2022 to 2022 and 2024 respectively.

Lippo Malls REIT bonds fell after the company announced poor earnings for the last quarter of 2018. The Indonesian company cut its distribution per unit (DPU) by more than half to S$0.3 for the quarter compared to S$ 0.79 last year. 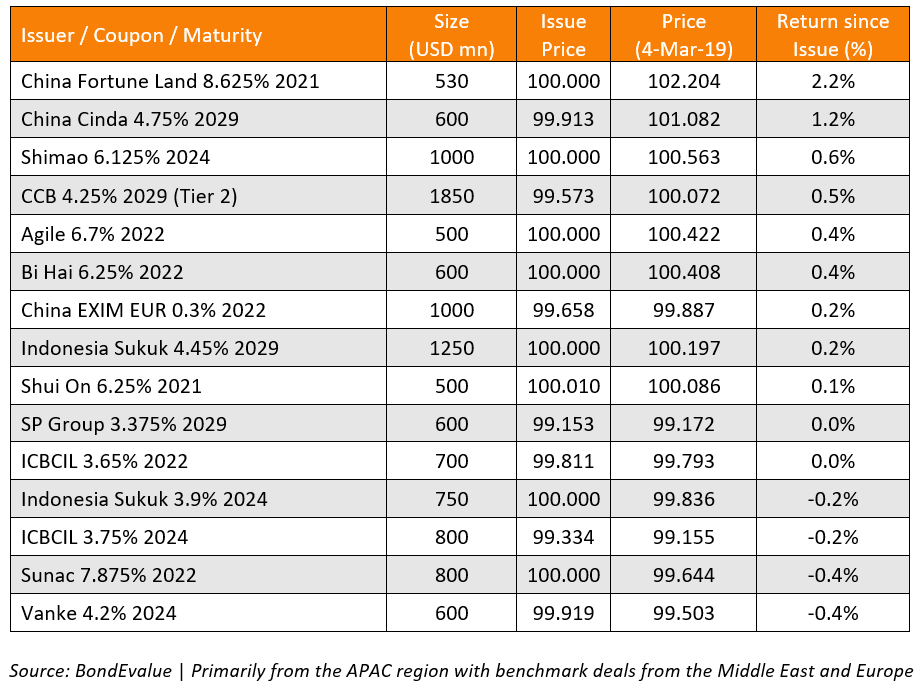