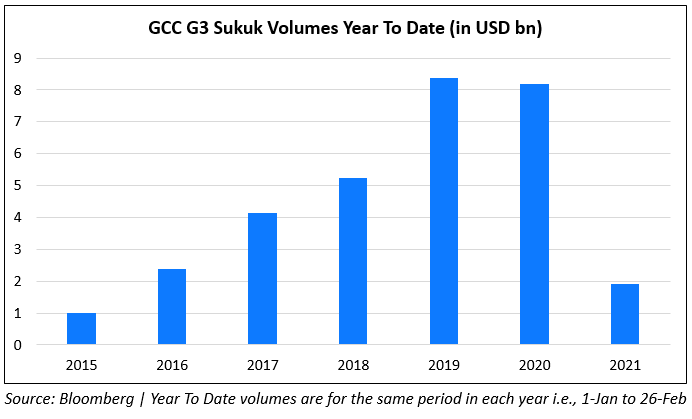 Global Sukuk issuance has slowed to multi-year lows for the year to date (YTD) period. As per Bloomberg, sovereign and corporate issuers globally have sold ~$2bn of sukuk debt this month and $4bn YTD, the lowest amount in the same period since 2015. GCC Sukuk G3 issuances are at $1.91bn YTD and just $160mn this month, the lowest since 2015. This is in stark contrast to volumes in these periods during the last three years. The sell-off in US Treasuries (leading to a rise in yields), which act as a pricing benchmark has been attributed as a major reason for the slowing down in issuances as per Akber Khan, senior director of asset management at Al Rayan Investment. He also adds that with oil prices rising this year, sovereigns which depend on the commodity have benefitted from expected deficits reducing and thereby less need to raise money via debt. Mr. Khan further added, “Banks also have plenty of liquidity so have been more focused on raising quasi-equity capital.” On a similar note, Moody’s published a report stating that 2021 global Sukuk issuances are to see a pullback after a record 2020. Moody’s forecasts overall Sukuk issuance of $96bn in 2021, down from $109bn in 2020.