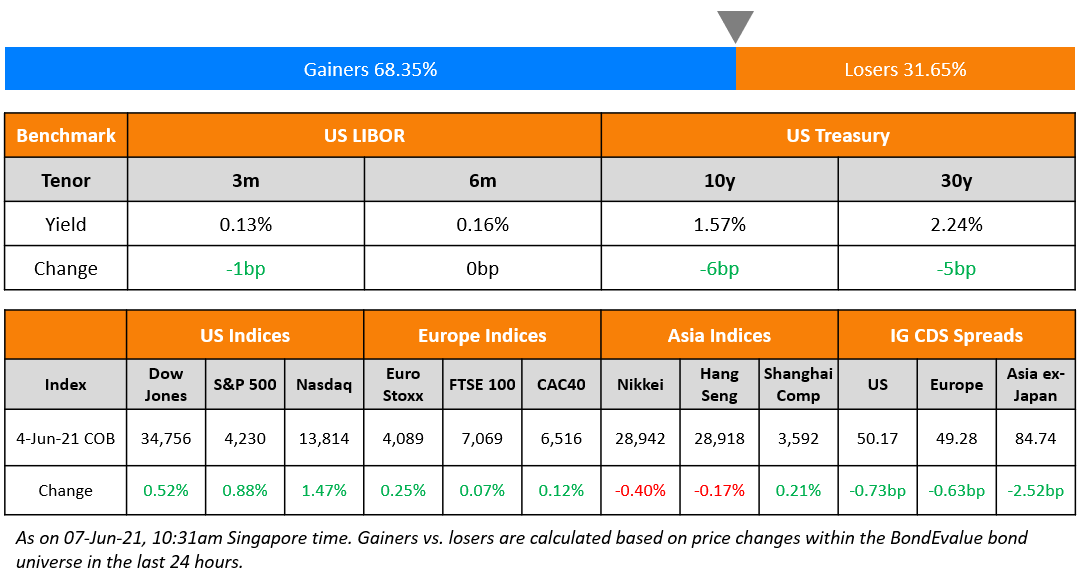 US stock markets ended the week in the green after the Non-Farm Payrolls report for May, where 559k jobs were added vs. 278k in April. The number was lower than the expectation of 671k. S&P was up 0.9% and the tech heavy Nasdaq was up 1.5% on Friday. The unemployment rate dropped to 5.8% from 6.1%, better than the expectation of 5.9%.  US 10Y Treasury yields were 7bp lower to 1.56%. In Europe, DAX led the gains, higher by 0.4% while FTSE and CAC were up ~0.1% each. US IG and HY CDS spreads tightened 0.7bp and 4.5bp respectively. EU main and crossover CDS spreads tightened 0.6bp and 2.9bp respectively. Asian markets are flat with Asia ex-Japan CDS spreads tightening 2.5bp. 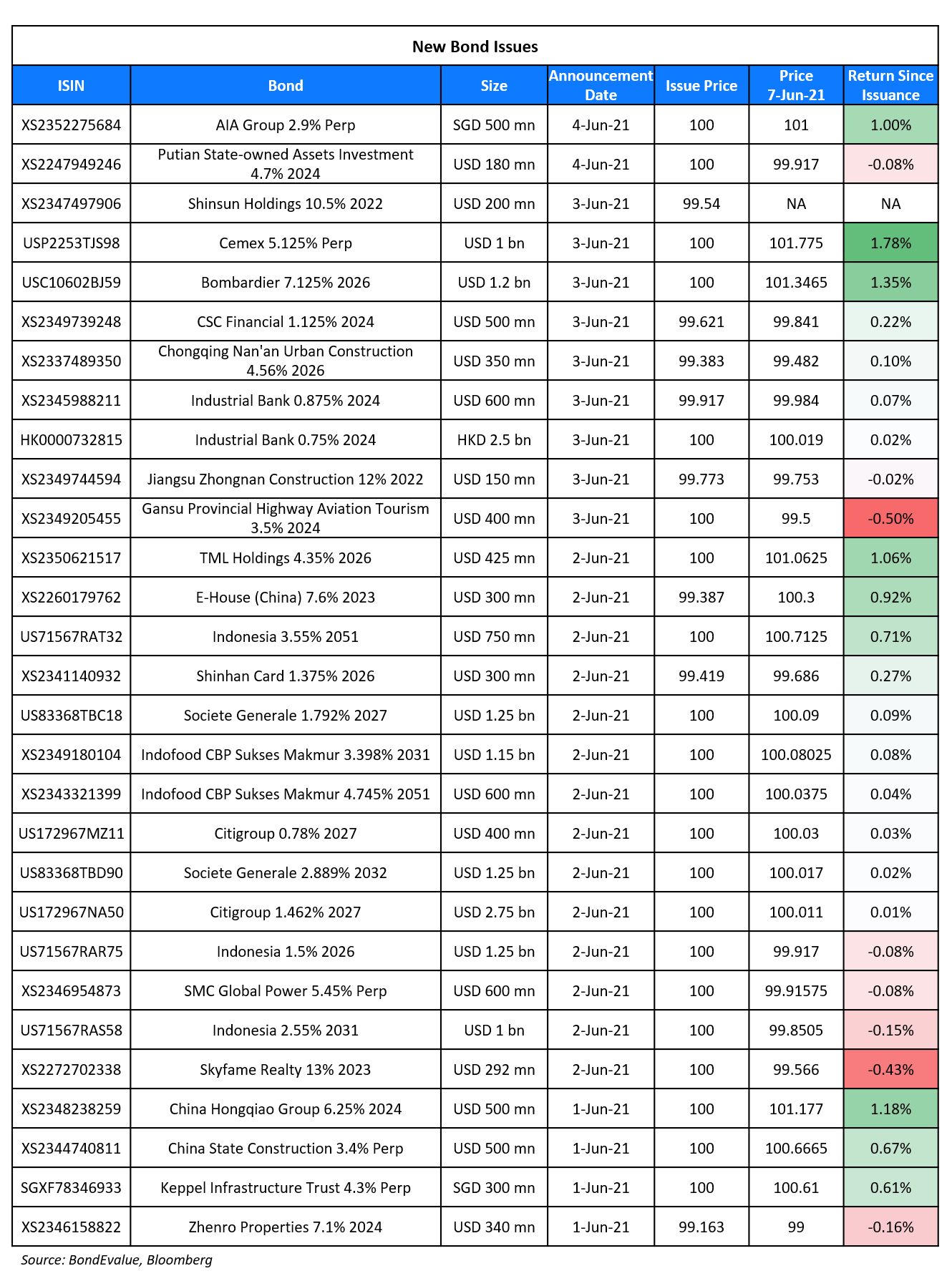 AIA Group raised S$500mn via a Perpetual non-call 10Y (PerpNC10) tier 2 bond at a yield of 2.9%. The bonds were rated A2. If not called on the first call date of June 11, 2031, the coupon resets to the prevailing SOR + initial credit spread of 133bp. There is no step-up. The coupon is deferrable and cumulative on a compounded basis. Bankers said the deal had been quietly offered to a limited group of investors, suggesting that it was either a private placement or a result of reverse enquiries (Term of the day, explained below). Proceeds will be used for general corporate purposes.

Putian State-owned Assets Investment raised $85mn via a tap of 4.7% 2024s at a yield of 4.7%. The bonds were rated BB+. The issuer is owned by the government of the Putian municipality in China’s Fujian province. Proceeds will be used for investments in domestic project construction and working capital purposes. The company had priced its debut $180mn 3Y bond at 4.7% earlier this year on April 20. 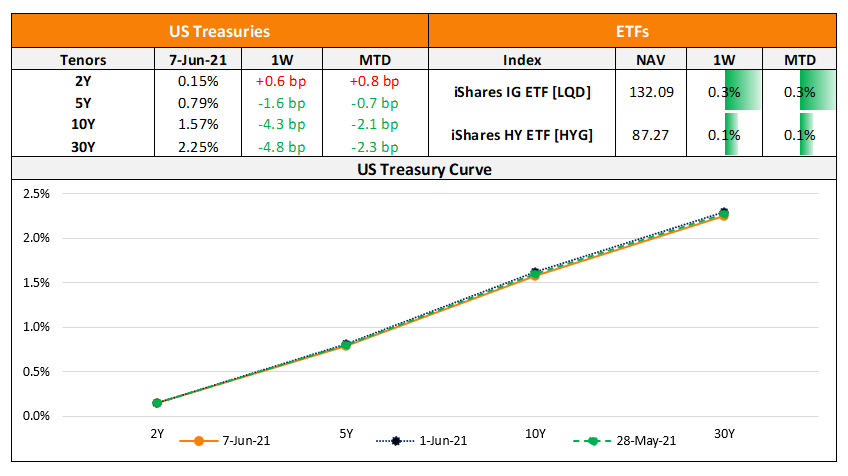 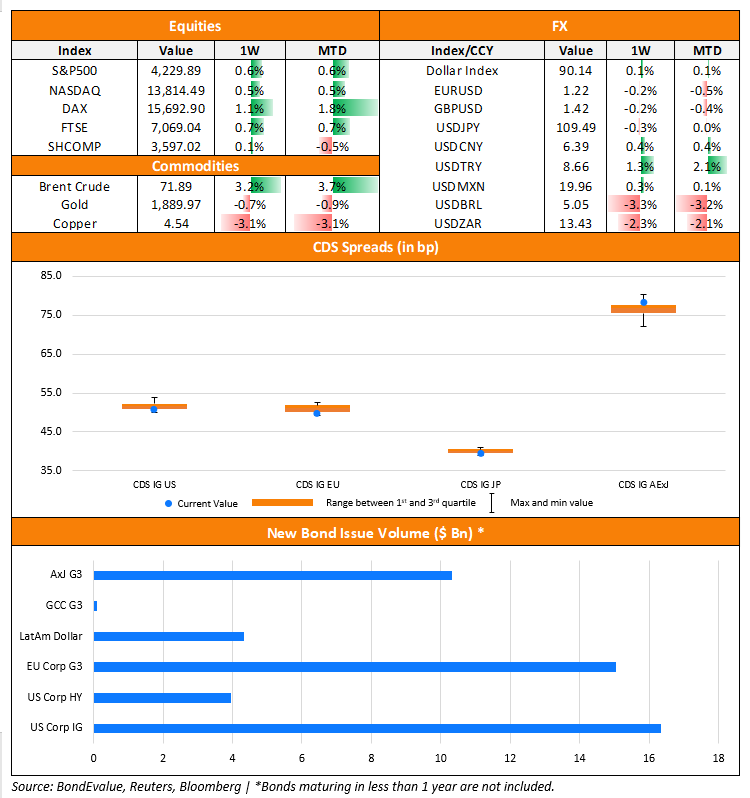 A reverse enquiry is an inquiry made by a potential investor to an issuer about purchasing a particular debt security in a one-off transaction. Here, the banker to the transaction acts as an agent to the institutional investor and tailors the issuance to meet the investor’s needs.

AIA Group raised S$500mn via a PerpNC10 tier 2 bond with bankers saying it was either a private placement or a result of reverse enquiries. Unlike typical bond issues which are launched with an initial guidance and priced later in the day or in the following day, AIA’s bonds came to the market at a final price guidance of 2.9%.

On the view that it is good to have inflation and rates back to normal – Janet Yellen, US Treasury Secretary
“If we ended up with a slightly higher interest-rate environment it would actually be a plus for society’s point of view and the Fed’s point of view.” “We’ve been fighting inflation that’s too low and interest rates that are too low now for a decade,” she said. “We want them to go back to” a normal environment, “and if this helps a little bit to alleviate things then that’s not a bad thing — that’s a good thing.”

On European Central Bank to debate whether to prolong pace of emergency bond-buying – Ignazio Visco, Bank of Italy Governor

“In the past I saw many risks related to deflation” but now “it’s clear that we need to be very careful about inflation, as we have been careful about deflation,” he said. “I am sure we will be successful in keeping inflation in check if it comes.”
On US bonds rallying after jobs report
Thomas Simons, economist at Jefferies
“Certainly, this is not the ‘million jobs per month’ that looked like the base-case expectation for the late spring ahead of the April payrolls data, but it isn’t a disaster either.”
Alicia Levine, chief strategist at BNY Mellon Investment Management
“The Fed is making greater progress on its inflation goals than it is on its employment goals.”
Willem Sels, chief investment officer for private banking and wealth management at HSBC
“There are pockets of wage pressure where there are labour shortages, but these seem limited in scope, and with oil price base effects fading in coming months, we think we should also see aggregate [consumer price] inflation start to stabilise in coming months,” Sels said.
Luca Paolini, chief strategist at Pictet Asset Management
“As long as the US economy remains strong and the dollar quite weak it’s difficult to see oil prices going down from here.”
On taper-tantrum woes fuelling hunt for foolproof emerging markets
Randy Kroszner, an economics professor at the University of Chicago Booth School of Business and former member of the Fed’s Board of Governors
“A taper tantrum that leads to a spike in U.S. rates would start attracting investors out of most other asset classes, including emerging-market assets, into the US.” “That would be a time of flight to relative quality. That would be time when people move into relatively safer emerging-market assets and pull out of relatively riskier ones.”
Eugenia Victorino, head of Asia strategy at Skandinaviska Enskilda Banken AB
“The emerging-market space will have to navigate around Fed communication on tapering.” “Foreign positioning is also important. If there is a build-up in foreign positioning, the risk of a reversal in flows would have a more dramatic impact than if positioning had been light.”
Alan Wilson, portfolio manager at Eurizon SLJ Capital
“Ongoing U.S. exceptionalism is highly likely to result in further market tests of the accommodative stance of the Federal Reserve,” Wilson said.
On the Fed to keep ‘invisible presence’ in bond market – in a note by Citigroup strategists led by Daniel Sorid
“[The Fed] cannot tolerate the catastrophic consequences of bond origination and secondary trading snapping shut.” “To truly exit from the bond market, the Fed has signaled it will need to address its concerns with a major market player: mutual funds.”
On investors souring on Turkey’s markets
Sahap Kavcioglu, Turkish central bank governor
“Expectations for an early easing of policy, which aren’t based on a just reasoning, need to disappear,”
Viktor Szabo, a fixed-income fund manager at Aberdeen Asset Management
“The risk of policy mistakes has increased so much that it overrides any other investment rationale.”
On Colombia’s bond risk topping Brazil as protests and politics take toll – Alejo Czerwonko, UBS Wealth Management’s emerging markets chief investment officer for the Americas
“Investors are requiring higher risk premium for the escalating social conflict in Colombia and the possible sizable change in economic policy stance that could take place if a radical candidate won the 2022 presidential election.” “Brazil’s social backdrop looks much calmer by comparison.” 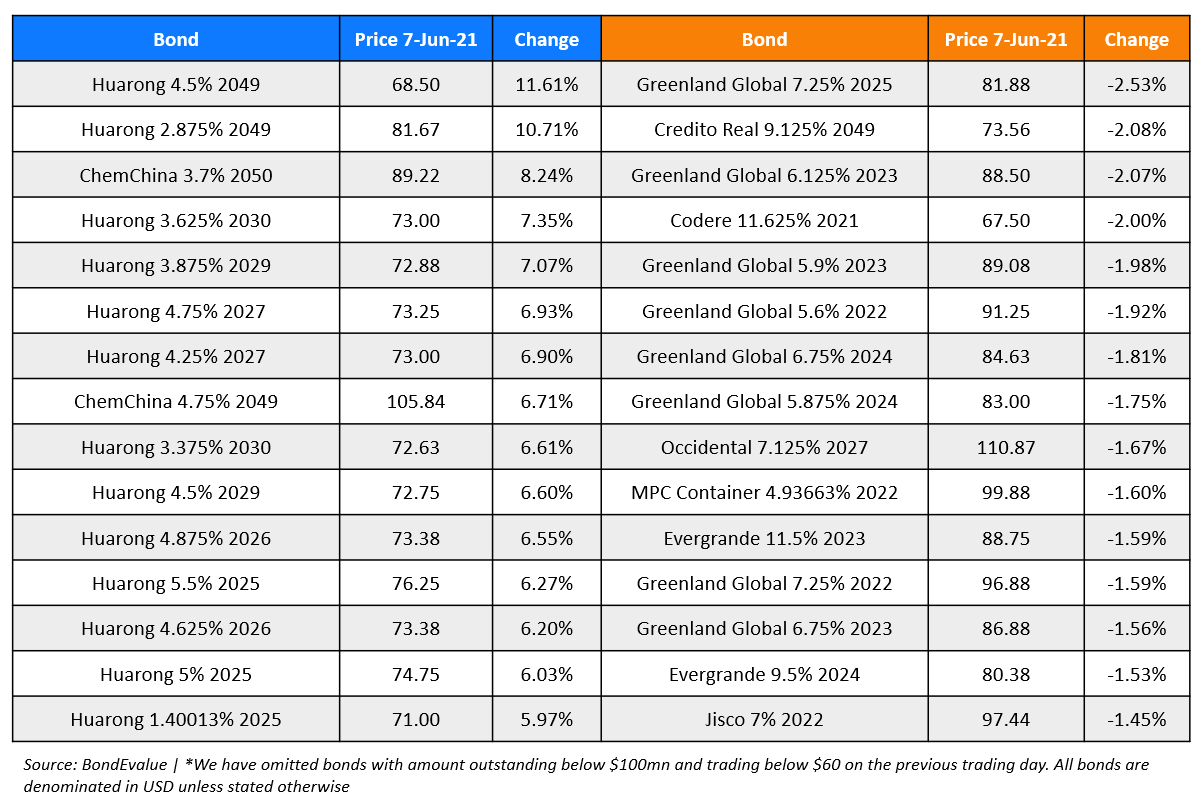