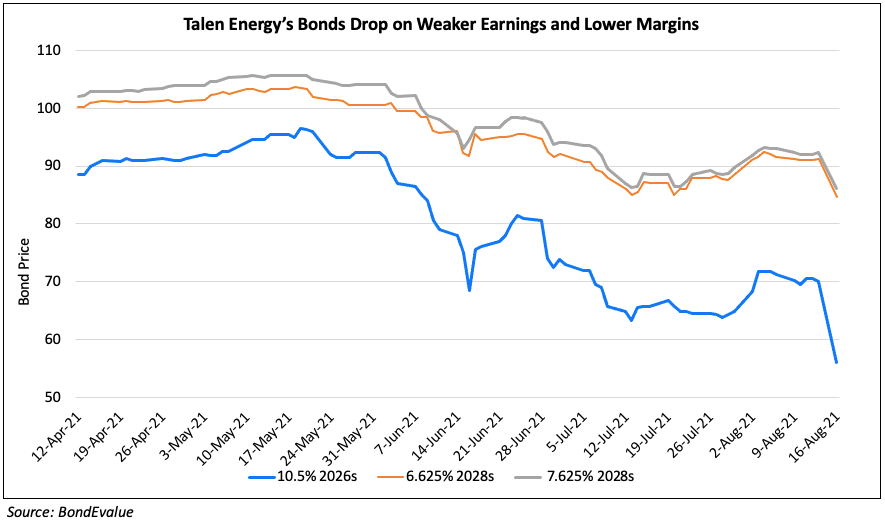 Talen Energy’s 10.5% 2026s dropped 25% and its 6.625% 2028s and 7.625% 2028s dropped ~7% after the company announced a gloomy earnings outlook in its 2Q2021 earnings report last week, based on weaker earnings and lower energy margins in 2Q. The energy company reported an EBITDA of $51mn in 2Q2021, down 30% YoY and witnessed a drop of 17% YoY in energy margins at $127mn, according to Bloomberg. The liquidity of the company dropped to $610mn in the quarter vs. $991mn in the previous quarter and its debt increased to $4bn during Q2, raising its debt to earning ratio to 7.3x from 6.6x in Q1. The company also lowered its 2021 EBITDA forecast to ~$520mn from $550mn and its cash flows to $15mn from $40mn and is evaluating various financing and liability management proposals.
The highly indebted company failed to stamp out speculations of a debt restructure and provide plans of reducing debt during its earnings calls. According to Bloomberg, Valerie Potenza, head of high yield research at Xtract Research, said, “There’s been market speculation around the company’s ability to spin out its crown jewel, the Susquehanna nuclear power station in Pennsylvania, though that currently serves as collateral for Talen’s secured notes and would likely invite a challenge from those holders.” The energy company which was privatized in 2016 has been struggling with its $4bn debt load. It had also surprised its investors in May after it planned a pivot to crypto mining hinged on using renewable energy to mine Bitcoin. Talen Energy is one of the largest power generation and infrastructure companies in North America with ~13GW of generating capacity. Fitch had downgraded the company to B- with a negative outlook on July 21 this year. It is rated B2 by Moody’s and B by S&P with a negative outlook and a credit watch negative respectively.