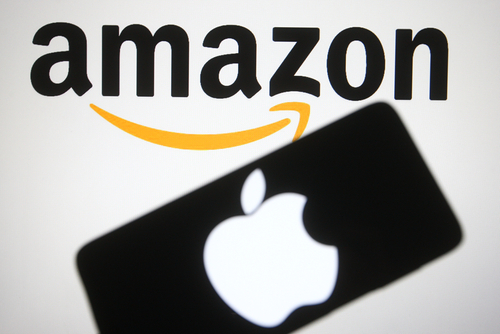 Apple reported revenues of $83.4bn in Q4, missing estimates of $84.7bn. While revenues grew 29% from the same period last year, that quarter did not include a new iPhone. iPhone revenues were up 47% YoY to $38.9bn, but missed expectations of $41.5bn. Mac revenues were up 1.6% YoY but were also below estimates while iPad did better, generating $8.25bn in the quarter, up 21% YoY. The wearables, home and accessories division generated $8.79bn, up 12% but missing expectations while services revenue jumped 26% to $18.3bn, beating expectations. CEO Tim Cook said, “We had a very strong performance despite larger than expected supply constraints, which we estimate to be around $6 billion”.

Amazon reported $110.81bn in Q3 revenues vs. $111.6bn expected with EPS also missing, at $6.12 vs $8.92 per share expected. Sales in online stores rose 3% YoY to $49.9bn while physical store sales rose 13% to $4.27bn. Revenue from third-party seller services climbed 18% to $24.25bn but indicated a slowdown from 34% Q2 and 60% in Q1. CNBC reports that revenue from Amazon services surpassed its retail sales for the first time ever with the former at $55.9bn and the latter at $54.9bn. Amazon expects sales between $130-140bn in Q4 and operating profits to range between $0-3bn per the company, compared to operating profits of $6.9bn in the year-ago period. CEO Andy Jassy said, “In the fourth quarter, we expect to incur several billion dollars of additional costs in our Consumer business as we manage through labor supply shortages, increased wage costs, global supply chain issues, and increased freight and shipping costs…It’ll be expensive for us in the short term, but it’s the right prioritization for our customers and partners.”