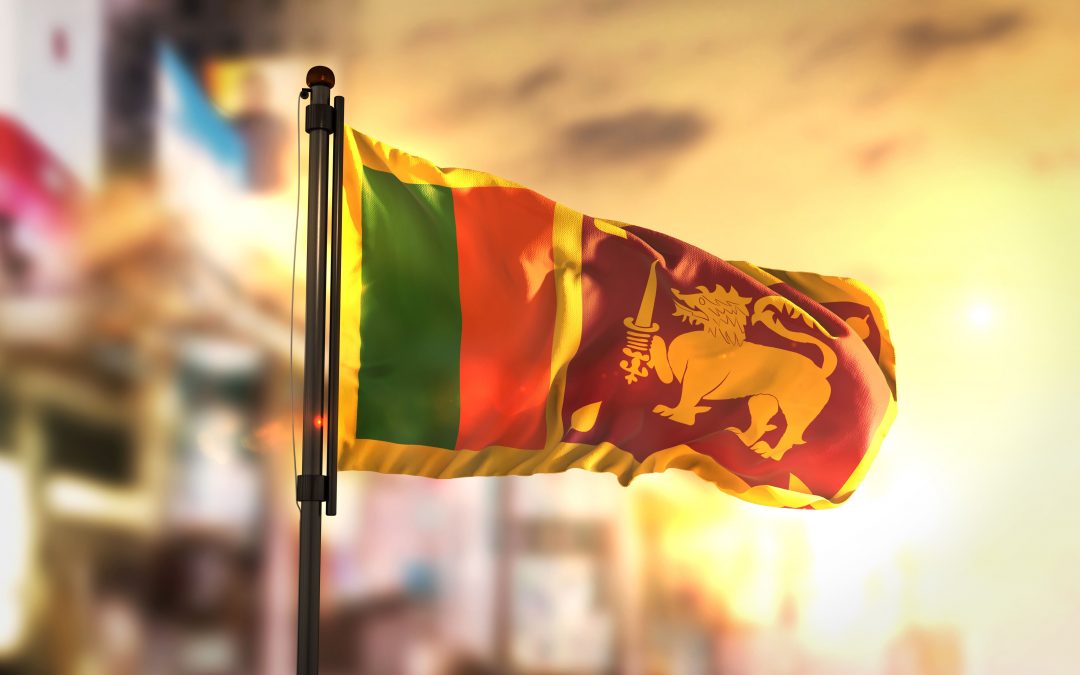 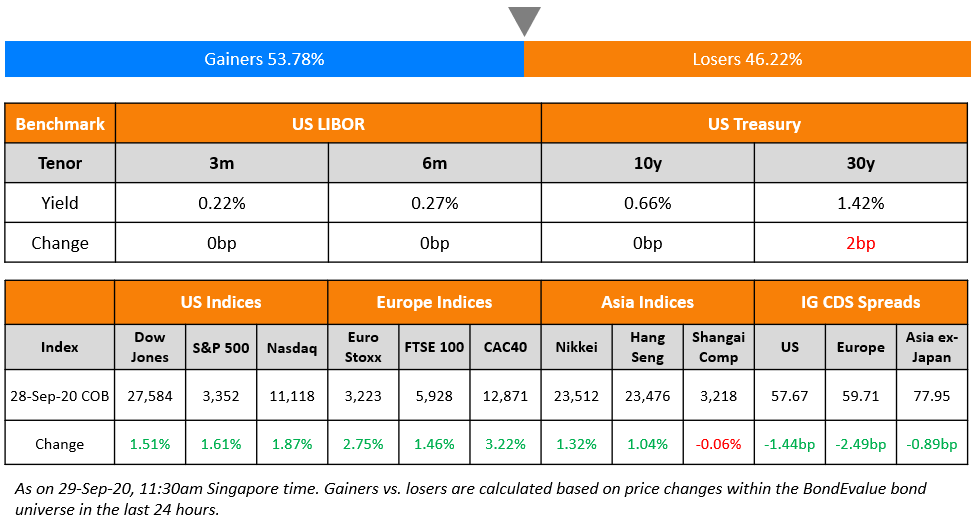 S&P ended higher by 1.6% with all sectors in the green and big tech names Apple and Amazon extending gains trending higher by 2.6% and 2.5% respectively. 10Y US Treasury yields were slightly changed and Asian equities are higher by ~0.5% today catching up with losses of the last few weeks. The first of three presidential debates begins today at 18:00 Pacific Time and could move markets based on the Trump’s performance. Slightly leading indicators for the US ISM Manufacturing Index due next week have shown some improvement yesterday with Dallas Fed Manufacturing at 13.6 vs. 8 expected for September. US IG CDS tightened 1.5bp and HY was flat. Asia ex-Japan CDS tightened by less than 1bp. 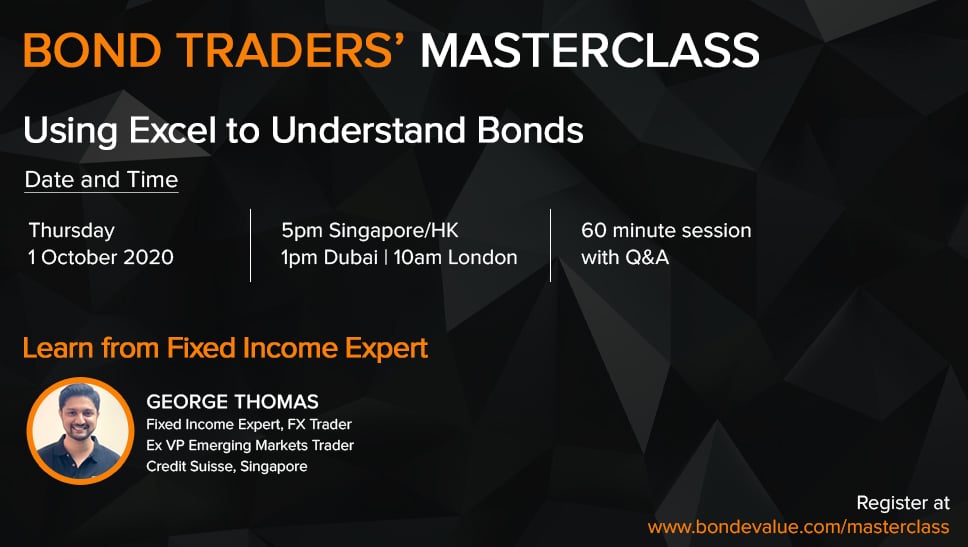 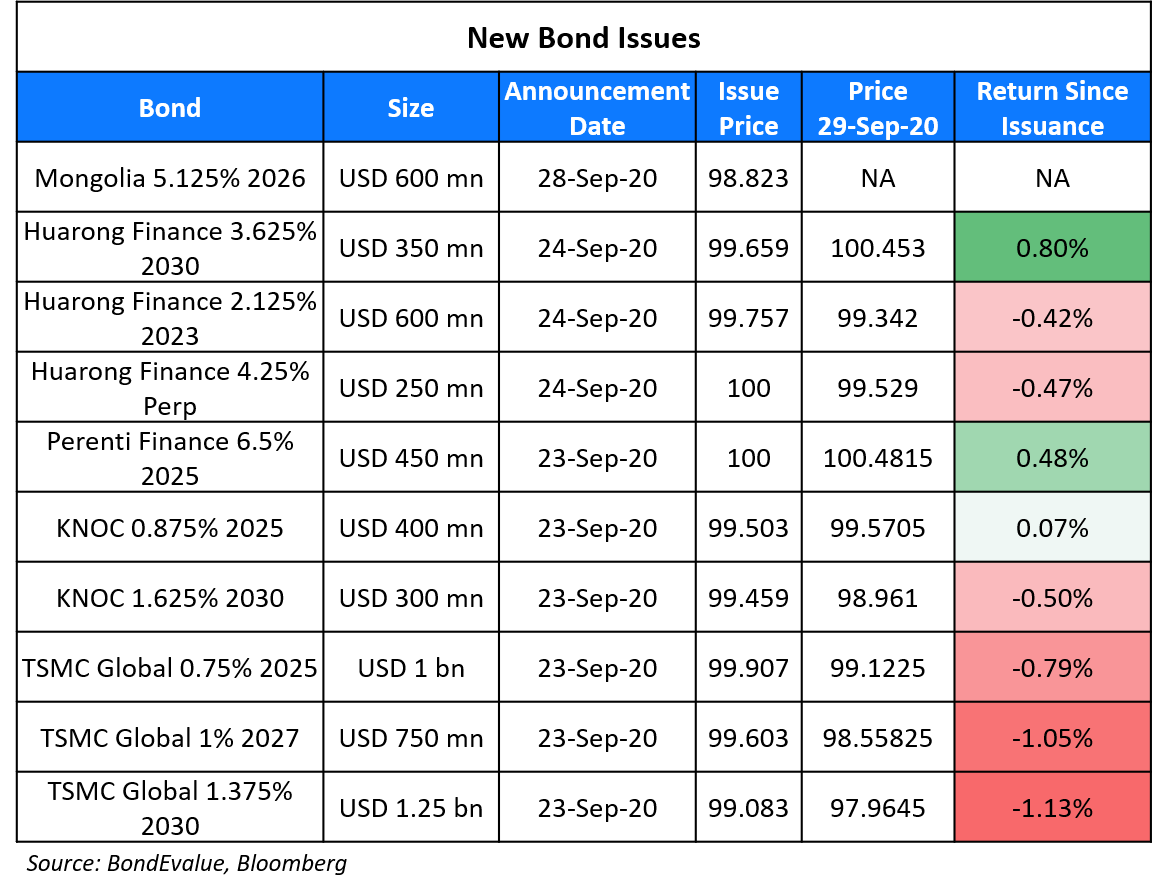 Moody’s downgrades IIFL Finance to B2 from B1, outlook stable

Fitch Affirms Scottish Widows’ IFS at ‘AA-‘ and IDR at ‘A+’; Outlooks Negative

Moody’s has downgraded Sri Lanka by two notches to Caa1 from B2 and pushed it further into junk territory as the country faces tight external financing conditions in the wake of the COVID-19 shock. The rating agency has revised its outlook to stable since the credit risks faced by the nation are balanced at the Caa1 rating level. Sri Lanka is staring at a huge decline in revenues due to the economic slowdown. This will put pressure on servicing upcoming debt due to low reserve coverage. The higher cost of capital will further limit scope for reforms, which points to weakening institutions and governance. As per the rating agency’s forecast:

According to the rating agency, “delays in securing additional funding from multilateral and bilateral creditors, in addition to the IMF’s Rapid Financing Facility, mean that the financing sources for upcoming repayments in the next few years are not secured and risk coming at high costs.” while adding, “International sovereign bonds account for a sizable portion of maturing government debt over this period, which leaves Sri Lanka exposed to shifts in investor sentiment.”

Both S&P and Fitch have rated Sri Lanka at B- which is one notch higher than Caa1 and a notch lower than earlier B2 rating by Moody’s. Sri Lanka’s bonds were largely stable on the secondary market since the new rating action after last week’s down-move on concerns over external finding.

China’s property development market has been shaken recently with growing fears of a liquidity crisis at Evergrande. As we reported yesterday, some of the largest asset managers in the world are holding Evergrande debt. With the ‘three-red lines’ regulations to take effect from 2021, many developers are set to see changes in their access to funds from financial institutions on the basis of their financial condition. Going by Fitch’s recent assessment of top players published on September 23, Longfor, Country Garden, Vanke and Poly Developers look better poised to consolidate their position in the market. Below is the broad rationale stated in the Fitch report:

On the other hand, Moody’s assessment shows that Evergrande, China Fortune, DaFa, Sichuan Languang, Aoyuan are at a greater risk. Below is a broad take on Moody’s rationale:

In the table below, we have calculated the three-red-line ratios for major developers to compare them vs. the thresholds defined by the regulator. 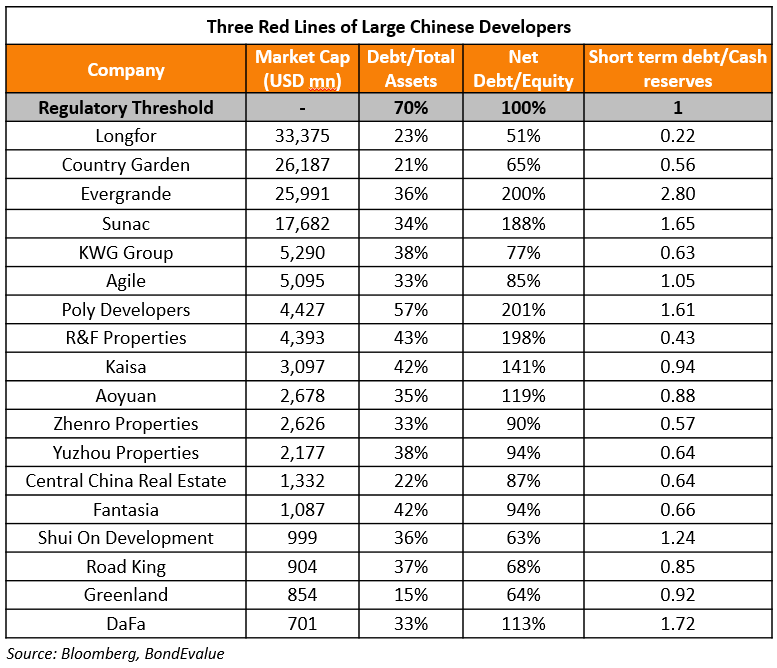 Most of Evergrande’s dollar bonds rallied on Monday after it published detailed half-year financials but its 12% 2023 (issued by Hengda Real Estate) sold-off 11%. This is because if they fail to win approval of an A-share listing of Hengda by January 2021, Evergrande or the Chairman would have to repay upto Rmb130bn ($19bn) it raised from strategic investors.

Evergrande’s rally yesterday has not given markets too much to cheer about with other developers with lower quality balance sheets seeing their dollar bonds fall. The chart below shows how Fantasia, Kaisa and Sunac’s dollar bonds fared on the secondary markets: 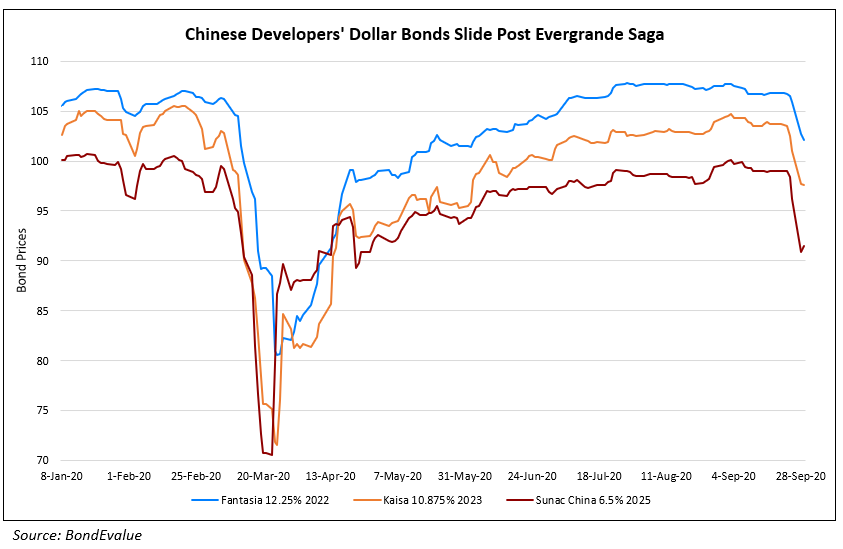 Pemex lost about 12% of Mexico’s gasoline market share over the past 21 months of President AMLO’s term. This is significantly higher than the 3.5% market share loss in the prior 35 months since the Latin American nation liberalized its fuel market. Pemex’s gasoline market share stood at 95% in December 2018 when AMLO’s term began. This shrunk to 83% as of August 2020, as per Bloomberg. Its share of the diesel market has also shrunk from 86% in December 2018 to 73% in August this year. Pemex’s loss is private oil majors’ gain. Companies such as Royal Dutch Shell, BP, Chevron and Exxon have grown their market share in Mexico after the country allowed other companies to import, distribute and sell fuel in the Mexican market for the first time since the industry’s nationalization in 1938. Rajan Vig, founder of independent oil-trading firm Indimex in Mexico City said, “The cracks are beginning to appear” in AMLO’s energy policies, adding, “Demand continues to exist. In fact, it has increased. And if you restrict supply, people are going to have to find more creative ways of bringing in the product.” The loss of market share is bad news for the AMLO administration, which promised to strengthen Pemex by dialing back the 2013-2014 energy reforms of the previous administration. According to Bloomberg, AMLO instructed energy regulators in a closed-door meeting last week to stop issuing new permits for fuel retailers and energy infrastructure. He also said that changing the constitution over the next three years is on the table if Pemex’s oil output does not reverse its decline.

While a bond’s duration is a measure of its sensitivity to interest rate changes, a bond’s convexity is a measure of the sensitivity of the bond’s duration to changes in the bond’s yield. Put differently, convexity is the measure of the curvature in the relationship between a bond’s yield and price. A simpler way to understand this is with the example of a car – like speed is the first derivative of distance wrt to time, duration is the first derivative of a bond’s price wrt yield; likewise acceleration and convexity are the second derivative of distance and a bond’s price respectively. This is an important metric for investors to track as the change in bond yields do not have a linear change on bond prices. This can be better explained by the graph below. 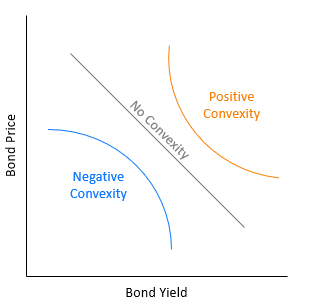 To learn more about bond calculations, sign up for our masterclass on Bond Calculations Using Excel tomorrow at 5pm Singapore time.

“The public health crisis will continue to weigh on economic activity and poses downside risks to the economic outlook,” she said. The Governing Council “continues to stand ready to adjust all of its instruments, as appropriate.”

“The Governing Council will carefully assess all incoming information, including developments in the exchange rate, with regard to its implications for the medium-term inflation outlook,” Lagarde said. “We monitor those movements very closely in order to adjust our measures as a result of inflation projections in short and medium term,” she said.

“But should such measures not prove sufficient, or should they progress too slowly, we could consider other options, such as, for example, excluding certain bonds – based on clear and transparent rules – that are used to finance projects that conflict with the decarbonisation objectives of the EU,” Schnabel said.

“More and more people are coming in, and it’s only the beginning,” says Dehn. “Asia’s going to become very large,” he adds. “Asia markets are going to make their way into all the major global bond indices.” “All the money has been in the US, it’s been like a magnet of capital,” he adds. “When that magnet loses its power and the money starts flowing back, it starts to ease finance constraints in other parts of the world.”

“When you have a bigger portion for your holdings held by foreigners, they are more affected by global macro sentiment,” he says. “You have a lot of markets that used to produce higher yields,” he says. “For the other markets like [South] Korea, Thailand, yields have dropped significantly.”

I expect the immediate impact on the market to be limited as China’s futures market isn’t very active. But it’s still an important step for China to gradually open up the domestic market, as many foreign investors would need derivatives for hedging purposes, and they could only do that in offshore markets like Hong Kong and Singapore before. This would also drive the development of China’s derivatives market and attract more capital inflows. 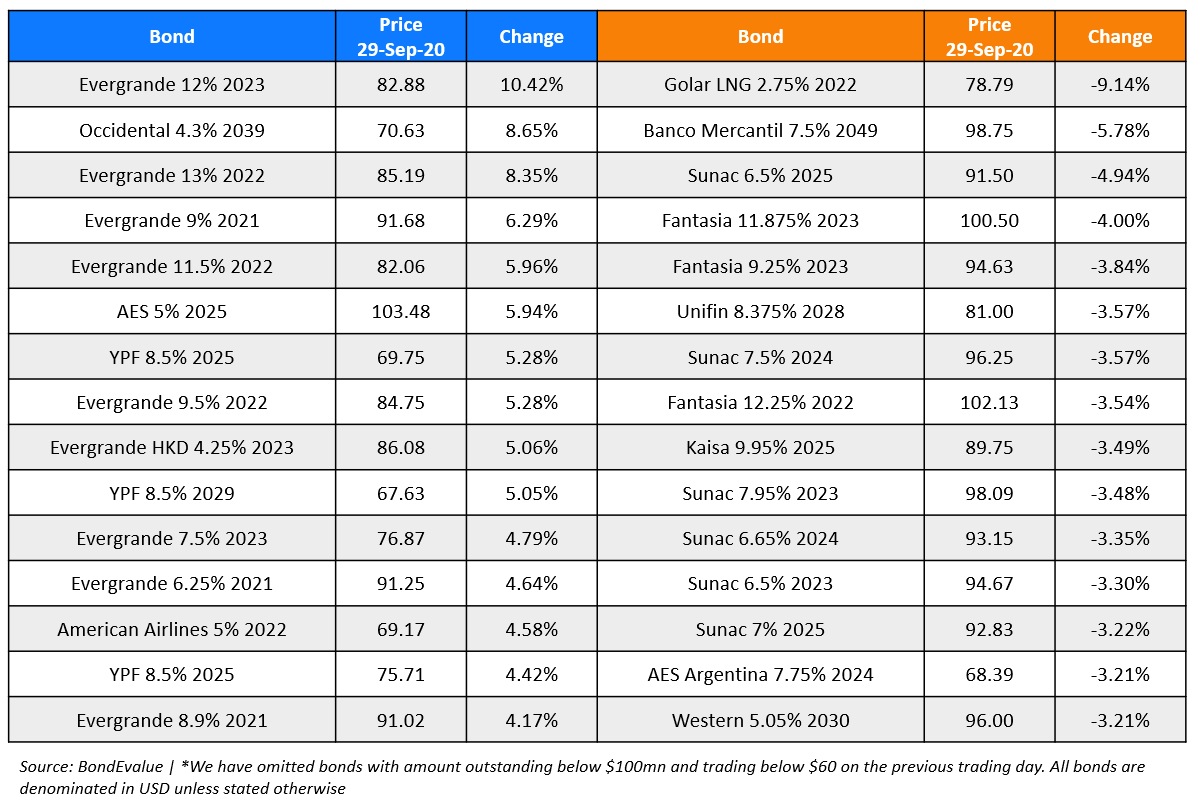