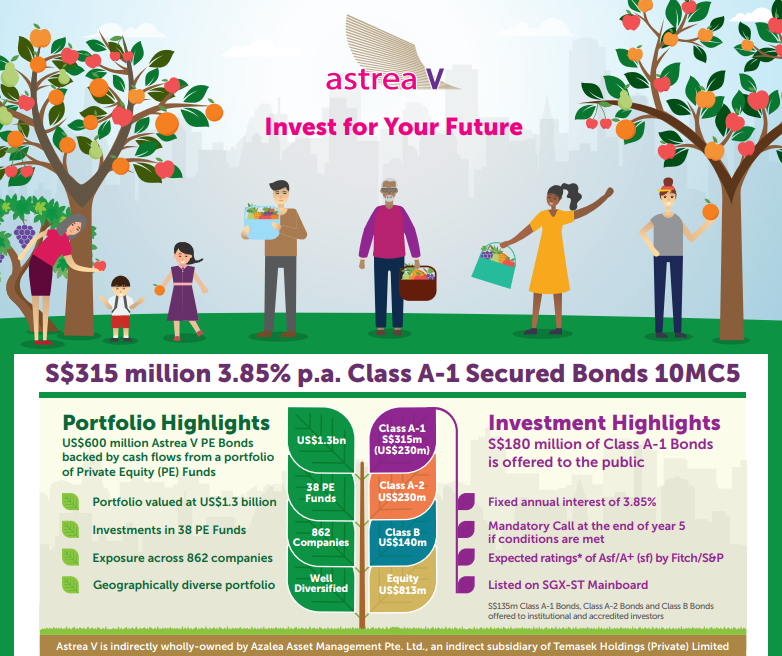 The Azalea Group, a subsidiary of Singapore’s Temasek Holdings specialising in private equity investments, has launched Astrea V, a securitised bond backed by 38 private equity funds managed by 32 private equity managers and valued at US$1.3 billion, giving exposure to about 860 companies in various industries. The bond prospectus indicated that the structure and features of the Astrea V bond will be largely similar to that of Astrea IV which was issued in June 2018.  It will have the same structural safeguards, including a reserve account that builds up cash to redeem the bonds in tranches. However, the total offering size is expected to be the equivalent of US$600 million or S$827 million, on the back of orders of over US$4.3 billion across 3 tranches, as compared to Astrea IV’s US$500 million equivalent offering size.

Class A-1 (rated A+/A by S&P/Fitch), the least risky tranche, will be S$315 million in size. They have a scheduled call date in 2024 where the interest rate steps up by 100bps if the bonds are not called, and a final maturity in 10-years. Final guidance is set at 3.85%, from initial guidance of 4.0% area. This class will also pay a bonus of 0.5% of the principal amount on redemption if a performance threshold is met. A portion of Class A-1 will be offered to retail investors for subscription with a minimum investment of S$2000. The size of this public offering depended on the response during the book-building process, and is expected to be S$180 million, larger than the Astrea IV’s S$121 million.

Class A-2 bonds (rated A by Fitch) are expected to raise US$230 million and also have a scheduled call date in 2024 where the interest rate steps up by 100bps if the bonds are not called, and a final maturity in 10-years. Final guidance is set at 4.5%, tightened from initial guidance of 4.9% area. Class B bonds (rated BBB by Fitch) are planned for US$140 million at final guidance of 5.75%, from initial guidance of 6.0% area. The bonds will mature in 2029 with no callable feature. Class A-2 and Class B bonds are available only to accredited investors and institutions, and offer a 25-cent rebate for private bank orders.