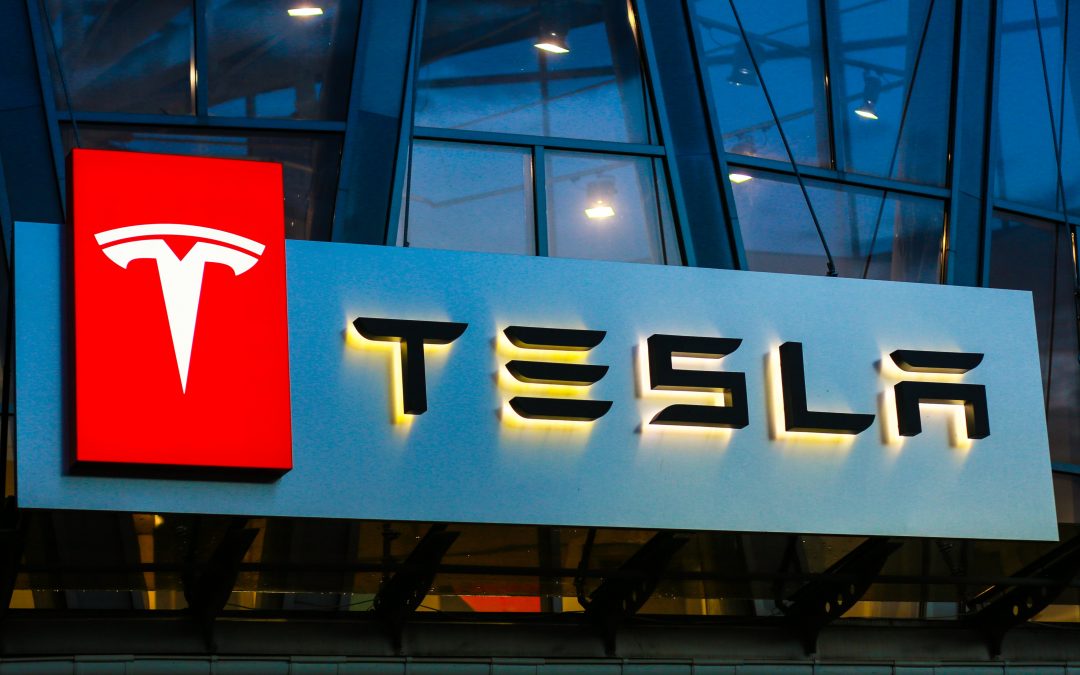 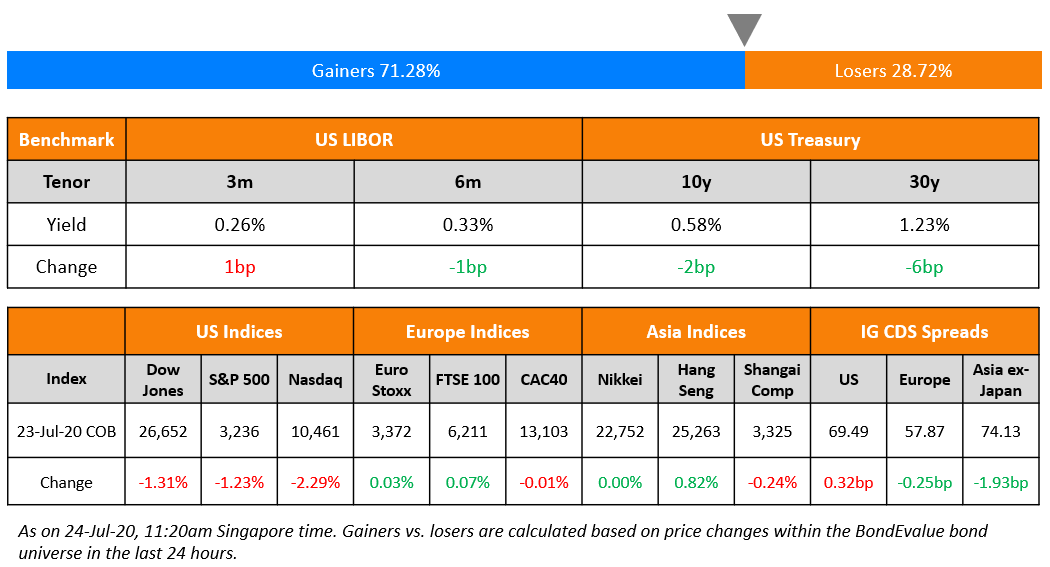 Sentiment has soured overnight in Wall Street as an unexpected increase in the US initial jobless claims number by 109K to 1.416mn, raised concerns that the recent lockdowns are stalling the economic recovery. Spiking coronavirus cases and rising US China tensions didn’t help investor sentiment. European shares fared better than the US but still ended the session in the red. US Treasuries found some safe haven demand with the 10Y and 30Y yields falling 2-7 basis points. New issues saw a very slow week but Asian dollar credit spreads continue to tighten. Asian markers are opening lower this morning. 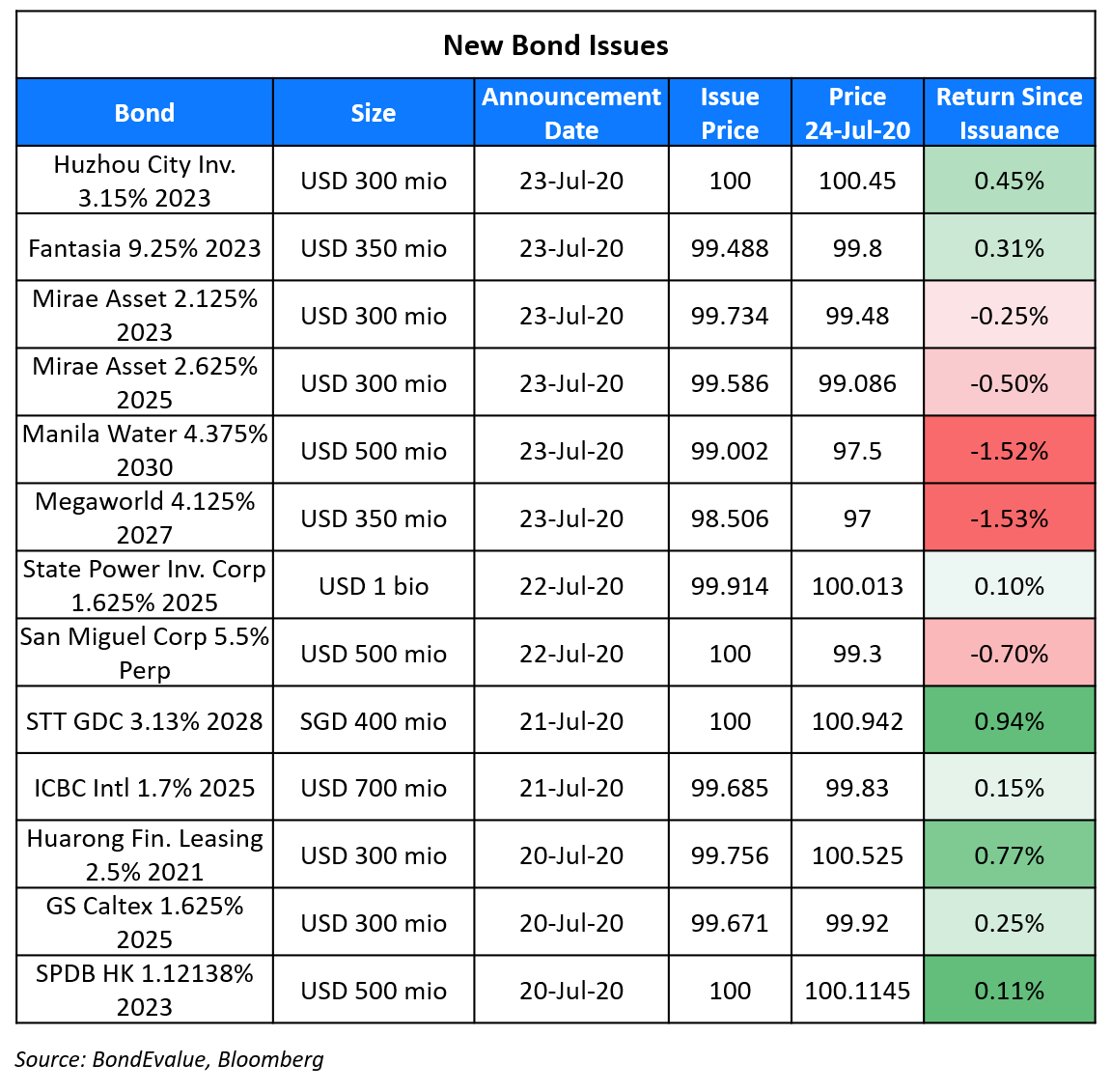 Moody’s upgrades Tesla’s ratings including CFR to B2 and senior unsecured to B3; the outlook is stable

Investors Pile Up on Longer Tenor Bonds in Pursuit of Yield

The pandemic has led central banks across the world to slash interest rates in a bid to stimulate their economies. Falling rates have led bond investors to pile up on longer-dated bonds in pursuit of yield. As explained in module 1 of our Bond Traders’ Masterclass, one of the factors that impacts bond prices is tenor – greater the tenor, greater the bond’s sensitivity to interest rate changes (aka duration). Issuers need to compensate investors for the greater duration, and thus offer higher yields on longer tenor bonds. According to the SCMP, corporates from Asia ex-Japan have raised $28.5bn worth of bonds with tenors of 30-years and beyond in the first half of this year. This is 3x the issuance of longer-tenor bonds in the same period last year. Leong Wai-mei, a fixed income portfolio manager at Eastspring Investments said, “Long tenor bonds of stable investment-grade corporates are attractive against the backdrop of interest rates being ‘lower for longer’.” Terence Chia, managing director of Asia-Pacific debt syndication at Credit Suisse expects supply to remain strong aid the greater demand. He said, “With the current low US dollar interest rates we expect a solid pipeline for long tenor bonds for the rest of this year.” In the table below, we have compiled the list of dollar bonds from Asia ex-Japan issuers issued this year with a tenor greater than 10-years and amount outstanding of over $300mn. 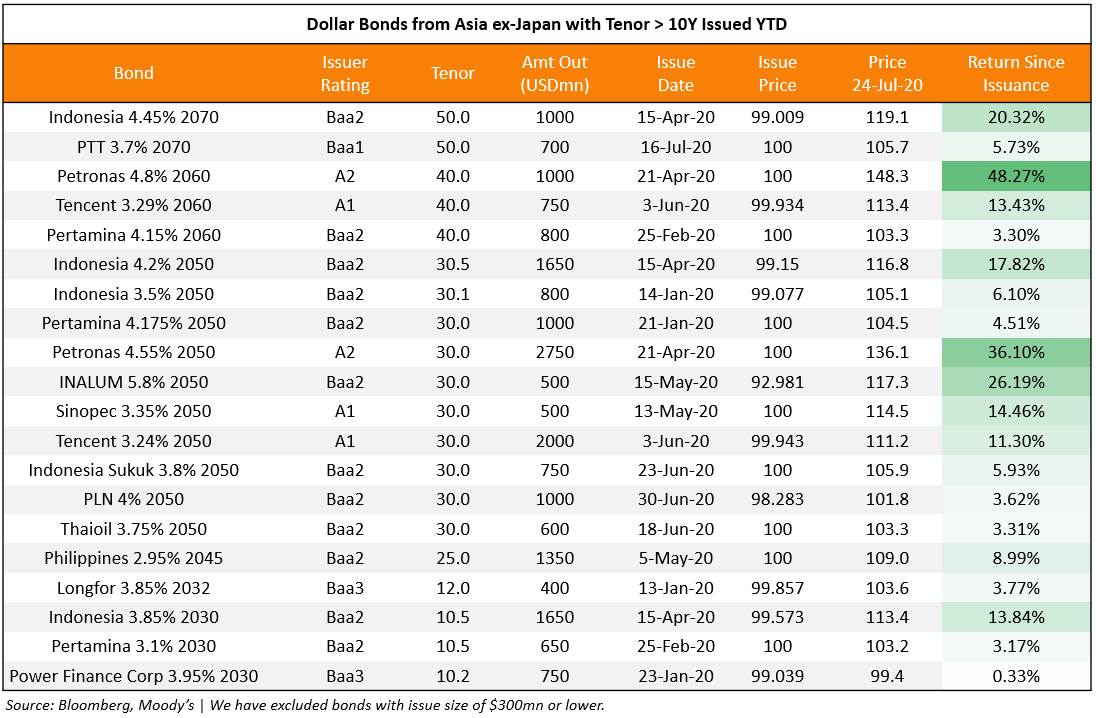 Moody’s upgraded Tesla’s Corporate Family Rating from B3 to B2 and its senior unsecured rating from Caa1 to B3 with a stable outlook. This comes just a day after the electric carmaker reported its fourth consecutive quarterly profit. The earnings smashed expectations with revenues of $6.04bn (exp $5.37bn) and earnings per share of $2.18 (ex-items, exp 3 cents) and GAAP net income of $104mn. Moody’s cited Tesla’s progress and the expectation of greater financial stability going forward as reason for the upgrade. It said, “The upgrade reflects Tesla’s sustainable position in the auto industry as a specialized producer of pure battery electric vehicles (BEVs). However, preserving this strong position in BEVs in the face of emerging competitive challenges will depend on Tesla’s progress around manufacturing efficiency and product development to achieve even broader customer acceptance at an affordable price.” Moody’s added that the company’s weak governance constrains the rating. Tesla’s stock has skyrocketed over the past few months, returning over 3x YTD and almost 6x in one year. Its 5.3% bonds due 2025 have been inching higher towards its call price of 104 as it approaches the call date of August 19 this year, currently trading at 103.5 on the secondary markets.

HPS Investments Partners has agreed to provide a 3Y secured $1bn lifeline to Bombardier. The Montreal-based train and plane manufacturer also reported that it had an improved second quarter, spending $500mn lesser than expected. The new credit of $1bn is expected to be in place by the 3rd quarter this year while the reduced outflows would help the company in bolstering its finances. The company has been making efforts to restructure its finances and reduce its leverage. It is also in the process of selling its rail business to France’s Alstom SA group. According to the terms of the $1bn loan, secured against a collateral of unspecified items from its aircraft inventory and related accounts, Bombardier will have to repay half of the outstanding principal once the agreement is reached with Alstom and use a minimum of $750mn over three years. “Collectively, these actions provide Bombardier with additional liquidity to operate its business during the COVID-19 pandemic as it strives to close previously announced divestments undertaken to reshape Bombardier’s capital structure,” the company said in the press release. The dollar bonds of Bombardier spiked on the funding news. Its 6% and 6.125% bonds due 2022 and 2023 traded at 90 and 85.25 cents on the dollar, both up 1 point overnight. 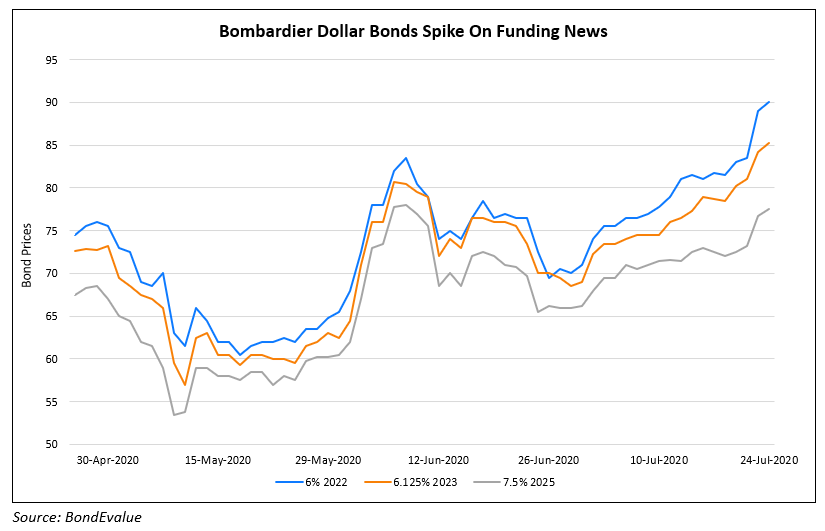 US-listed securities with market value of more than $100mn have been required to list the details of their holdings with the US Securities and Exchange Commission (SEC) every quarter through Form 13F since 1978. However on July 10, the SEC proposed amendments to update form 13F for institutional investment managers, according to which the reporting threshold is being raised to $3.5bn based on a 30x growth in the overall value of US public corporate equities from $1.1tn to $35.6tn. The new threshold would result in retaining disclosure of over 90% of the dollar value of the holdings data currently reported while eliminating nearly 90% of smaller securities according to SEC. “Monitoring equity holdings of large institutional investment managers is an important part of our regulation and oversight of the securities markets,” SEC Chairman Jay Clayton said in a statement.

The proposal is seen by many as a shift in the transparency policy that would allow asset managers with an AUM of less than $3.5bn to not disclose holding details. The lack of information of securities will directly affect the companies and investors who used this information to asses their investor base and possible collaborators. Some analyst feel that the result of the amendment in Form 13F would reduce the transparency in the holding at a time when there lies a need to increase the transparency. As per Allison Herren Lee, the sole Democratic commissioner of the SEC’s panel of four, the regulator should have developed a better understanding of how 13F disclosures were used, and by whom by commenting that “We’re reducing transparency without doing a deep enough dive to consider at what cost, particularly when we consider the size of some managers we’re dealing with that will be excluded.”

In a related news, based on representations by Arbutus Biopharma, the SEC’s Division of Corporation Finance has determined not to publicly disclose the companies holdings as it deems this information as confidential.

Yield to Call (YTC) is a return metric applicable to callable bonds and refers to the total return that a bondholder would receive if the bond is held till the call date, provided that the issuer does not default. YTC is an important metric from an investor’s standpoint as it gives them an indication of the expected return, if the bond is called on the call date. It is important because the call option lies with the issuer, not the investor. And hence, investors must review both the yield to maturity (YTM) and the YTC when analyzing their bond investments.

On Real Yields on US Treasuries

“Low real yields represent a barometer for liquidity being injected into the market,” said Jim Caron, who added that they prompt investors to search out other sources of income. “It is no doubt supportive for financial assets and supportive for growth,” he said. “The Fed is unapologetic about what they are doing,” said Mr Caron. “They are saying, ‘we need to do more’.”

Scott DiMaggio said the current level of real yields suggested investors believed the Fed would do more. “Central banks are doing everything they can to push down nominal yields in hopes that . . . they will pump up growth.”

“The fall in offshore hedging costs boosts prospects for more Indian companies to issue dollar bonds at reasonable costs,” said Prabal Banerjee. “The rupee’s recovery could see the pipeline for overseas issuance resume as it highlights an improving sentiment among global investors for Indian assets,” said Banerjee at Bajaj Group. 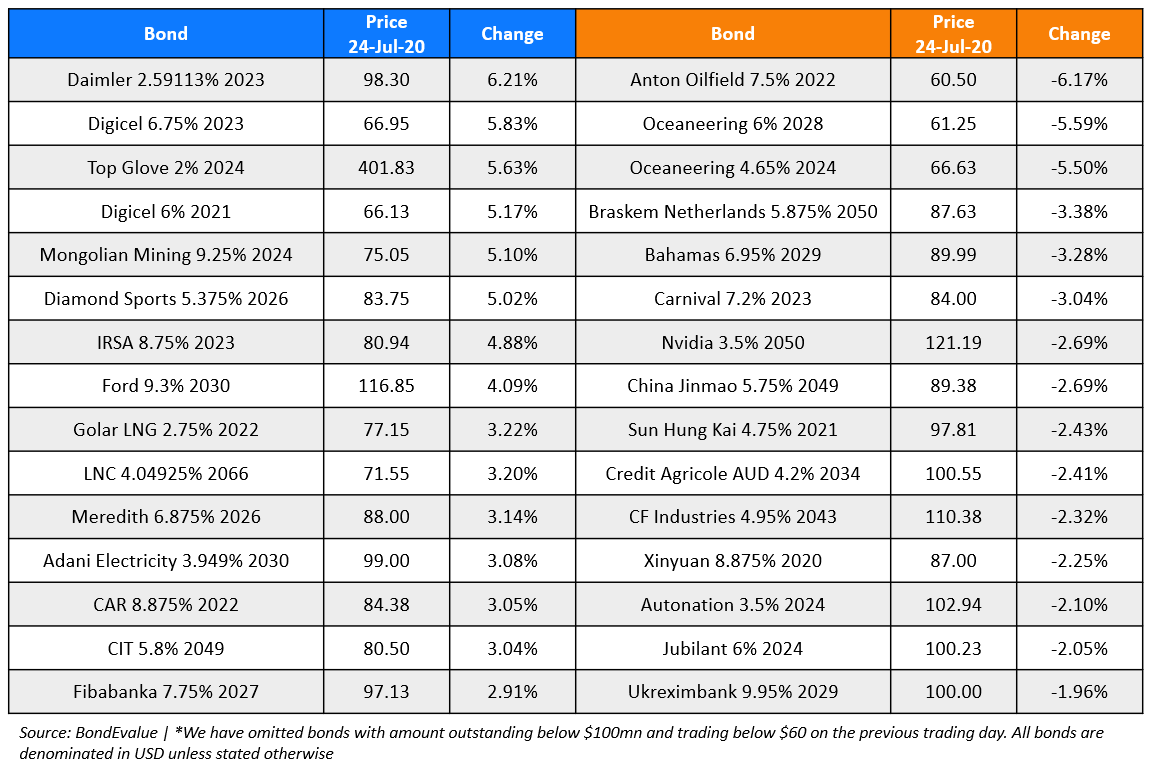