Tesla Upgraded to BB; China Regulators Probe Tech Cos on Past M&As Seazen Buyback of $198mn of 2021s; Gol Upgraded to B3 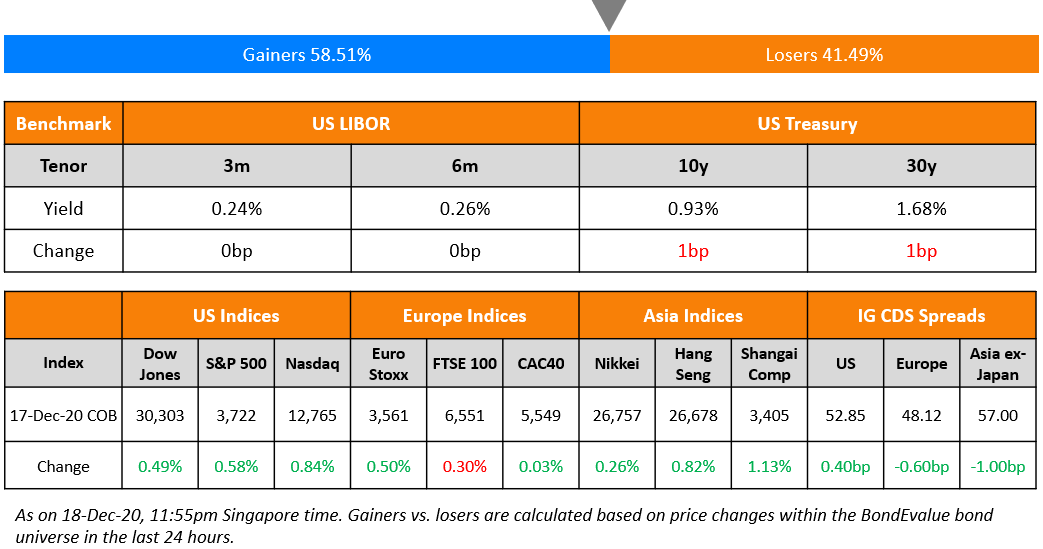 Risk assets continue to stay bid with the S&P and Nasdaq up 0.6% and 0.8% while DAX was up 0.8%. US 10Y Treasury yields were marginally higher by ~1bp. The White House came out with an announcement mid-day that they were optimistic of a stimulus deal in the next 24-28 hours. US macro data was softer as initial jobless claims printed at 885k for the previous week, rising by 23k. Also, the Philadelphia Fed manufacturing index was softer at 11.1 vs estimates of 20. The UK’s BoE kept interest rates unchanged and left its quantitative easing programme at £895bn ($1.2tn), having increased it up by £150bn ($203mn) last month. US IG CDS spreads were 0.4bp tighter while HY was flat. EU main and crossover CDS spreads narrowed 0.6bp and 6.3bp respectively. Asia ex-Japan CDS spreads were 1bp tighter. Asian equities have followed Wall Street, moving higher ~0.5%. 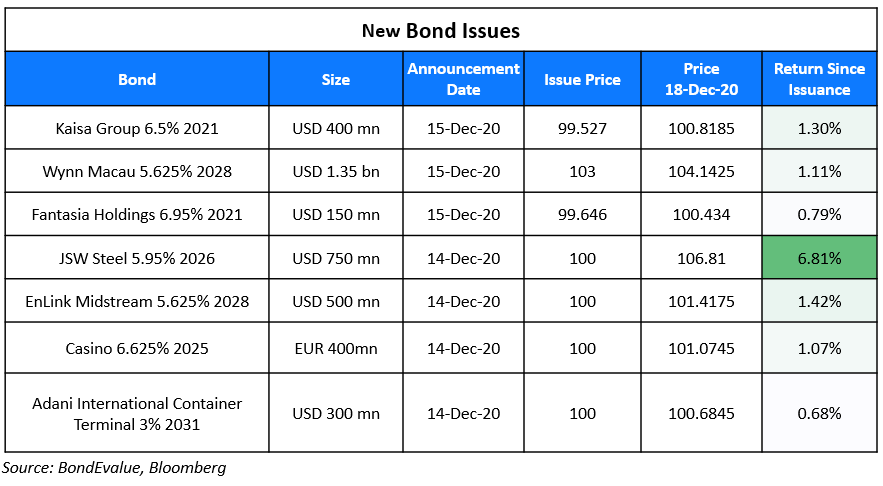 Rating agency S&P has acknowledged the improving credit metrics of Tesla, the most valued car maker in the world, as it raised Tesla’s rating by one notch to BB from BB-. The rating agency gave a positive outlook while stating that there is a ~33% probability that it could raise the ratings again over the next 12 months. The rating action comes on the back of improved liquidity after it completed its $5bn equity issuance on December 9, which follows its $7.3bn share sale earlier this year. With this increased liquidity, Tesla is expected to sit on a cash balance of more than $19bn by the year-end resulting in zero net debt. The low debt-to-EBITDA will allow the company to pursue its global expansion in China as well as Europe while continuing expansion of its operations in the US. While the rating agency was upbeat on Tesla, it remained cautious on “whether enough consumers (especially in the US) will switch from internal combustion engines and hybrid vehicles to Electric Vehicles (EVs) given limited financial incentives and a relatively benign gas price environment” since production targets are critical to Tesla. It also took into cognizance that Tesla faces intense competition from other global manufacturers who are expected to launch ~20-25 new EV models by the end of 2021. Despite the cautions, S&P forecasts Tesla’s deliveries to cross 470,000 this year itself as the EV maker enjoys a whooping 80% market share in the battery electric vehicle (BEV) segment. The other important drivers for the rating are as follows.

Tesla is one of the few companies to receive multiple upgrades during the pandemic. S&P had upgraded the company to BB- on October 12 and to B+ on July 28. The company is rated B2 by Moody’s after it received a one notch upgrade on July 23. The upgrades came on the strong performance of the company. In fact Tesla had recorded its highest operating income in the quarter ending September despite the pandemic slowdown. Its 5.3% 2025s were up 0.05 to trade at ~104.6 on the secondary markets.

Chinese Regulator State Administration of Market Regulation (SAMR), said it would fine Alibaba, Tencent-backed China Literature and Shenzhen Hive Box CNY 500,000 ($76,500) each, the maximum under a 2008 anti-monopoly law. This was on account of not reporting past deals suitably in regard to anti-trust reviews. The regulator said that they will look into the stock-for-stock merger between Huya Inc and DouYu International, which took place in October, that could lead to a combined market share of over 80% in China, according to data from MobTech. According to Reuters, Tencent is not only a major investor in both companies, but also pushed for the deal. Other transactions, including Tencent’s $3.5bn privatisation of search engine operator Sogou, are also being investigated.

“The fines of the three cases are a signal to society that anti-monopoly supervision in the internet field will be strengthened… The internet industry is not outside the oversight of anti-monopoly law”, SAMR noted. The deals fined include Alibaba’s $692mn investment in Intime in 2014 and their $2.6bn bid to privatize Intime in 2017. Shenzhen Hive Box, was held for its acquisition of China Post Smart Logistics and China Literature for failing to report its acquisition of New Classics Media in 2018.

Chinese real estate developer Seazen Holdings announced results of its tender offer where it will buyback $198.501mn worth of two dollar bonds due 2021. It will buy:

Moody’s Upgrades Gol Airlines to B3 with Stable Outlook

Moody’s upgraded Brazilian carrier Gol Airlines to B3 and changed its outlook to stable from negative. Moody’s also upgraded Gol Finance’s perpetual bonds guaranteed by Gol and Gol Linhas Aereas S.A. to Caa1 from Caa2 and the $350mn senior exchangeable notes due 2024 issued by Gol Equity Finance and guaranteed by Gol and Gol Linhas Aereas S.A. The upgrade was prompted by Gol’s improved operating performance, lower default risk and successful refinancing of other debt instruments such as working capital facilities and local market debentures as compared to expectations when the pandemic broke out. The ratings agency said that the ability to raise liquidity and control cash burn will still be a key aspect in Gol’s ratings assessment going forward given the constraints faced by the airlines industry at present.

Moody’s expects that Gol will end 2020 with around BRL 1bn ($200mn) in cash with no significant maturities over the next three years and ~BRL 6bn ($1.2bn) in other potential liquidity sources like receivables, financeable deposits and unencumbered assets. These sources can be tapped for secured financing transactions. Gol could be upgraded if debt/EBITDA goes below 6x, interest coverage of funds from operations plus interest sustains above 3x, has cash consistently above 20% of revenues and maintains an adequate liquidity profile. A downgrade is possible if passenger demand recovery slows down, liquidity issues emerge and if Gol isn’t able to strengthen credit metrics.

Brazilian engineering and construction company Andrade Gutierrez Engenharia S.A.’s (AGE) saw its bonds plunge after it was downgraded by Fitch closer to default at C from CCC-. The rating agency also downgraded the senior secured notes maturing in 2021 and 2024 to C from CCC-. The rating action comes after AGE announced a consent solicitation to bondholders of its $480mn 9.5% 2024s on December 15, requesting an extension of grace period of the $22mn coupon payment due on December 30 by 120 days, from 30 days in exchange for a consent fee of $1.5/bond. The construction company was also seeking a further extension of 62 days (from the 120 days) with a consent fee of $1/bond. The two extensions coincide with the $22mn coupon due on June 30 next year. The company’s liquidity has come under stress due to the impact of the pandemic and a depreciating Brazilian Real and this consent solicitation is viewed as the beginning of a “default-like process” by the rating agency. On the rating action, Fitch said, “The operating environment for the Engineering and Construction (E&C) companies in Brazil has substantially deteriorated and increased uncertainties about AGE’s capacity to continue the turnaround of its operations and recover the backlog on a sustainable basis. AGE’s backlog was BRL7.9 billion in September 2020.”

Lao People’s Democratic Republic aka Laos saw its 6.875% dollar bonds due 2021 rally by ~5 cents to 89.7 cents on the dollar yesterday ahead of their new bond issuance. Laos launched a 6Y amortizing bond on Wednesday with initial price guidance at 10% area with final pricing expected either today or early next week. The bonds are expected to be rated Caa2/CCC. The sovereign has committed to maintain at least two credit ratings from the three main international agencies, and to hold quarterly investment calls. Oppenheimer & Co is the sole bookrunner. 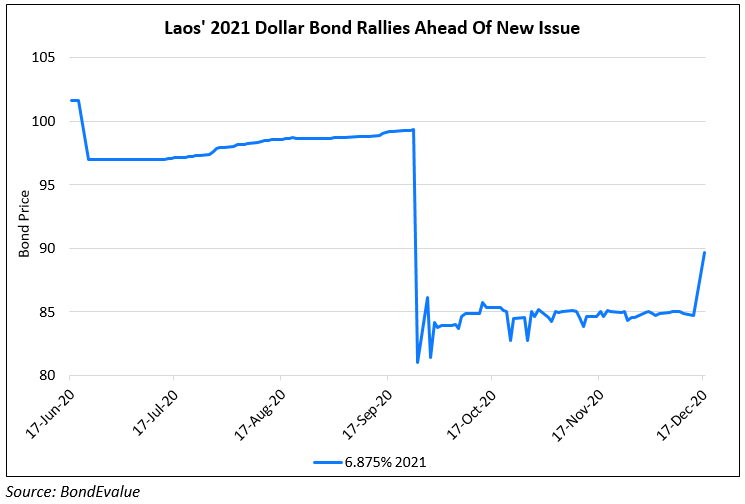 Laos has been facing financial pressures on account of the pandemic. In the next five years, Laos has debt service repayments averaging ~$1bn annually, including principal payments on its $150mn 6.875% dollar bond due in June 2021. Moody’s had downgraded Laos to Caa2 from Ba3 and changed the outlook to negative in August. Post that Fitch downgraded the sovereign from B- to CCC highlighting similar reasons as Moodys’ – increasing external liquidity pressures as a result of the pandemic, large debt maturities, narrowing of financing options and low forex buffers.

Singaporean conglomerate Keppel Corporation announced via an exchange filing that more Floatel bondholders have agreed to enter into a lock-up agreement related to the financial and corporate restructuring of Floatel. Keppel holds a 49.92% stake in Floatel via its wholly-owned subsidiary FELS Offshore. The filing stated that bondholders representing over 67% of Floatel’s first-lien (Term of the Day, explained below) bonds and 18% of its second-lien bonds are now party to the lock-up agreement, up from 56% and 13% respectively. Floatel shareholders representing a significant majority have also executed the agreement. The restructuring is expected to involve a new entity acquiring certain subsidiaries of Floatel that own and operate vessels.

A lien refers to a legal right of the creditor to claim a security interest or seize control in an asset provided by the asset’s owner. It gives a type of a legal guarantee to the lender for obligations like loan or debt repayments. Bonds typically can be either first lien, which consist of senior secured debt, or second lien, which consists of junior or subordinated debt that rank below first lien debt in the capital structure.  A bondholder of a ‘first lien bond’ gets repaid before all other liens and bondholders in the event of a default. Second lien holders get repaid only after the first lien holders get paid back. But it is important to note that even first lien holders may not get repaid all the money back if the borrower is unable to raise enough funds from the collateral sale to pay them back.

“Compared with previous periods during which non-negotiated Brexit outcomes had been possible, the economy was starting from a weaker position with greater spare capacity, increasing the Committee’s tolerance for a temporary overshoot in inflation… It would be important to ensure that medium-term inflation expectations remained well anchored.”

“Credit Suisse had been aware of these deficiencies from at least 2004,” the federal prosecutor said in a statement. “The fact that the bank let it continue until 2008, or even beyond, impeded or frustrated the detection of the money laundering activities carried out by the criminal organisation with the aid of the bank executive.”

You have asked us to respond to two questions: “[D]oes the Treasury Secretary have the authority to extend the CARES Act supported Federal Reserve lending facilities consistent with Sec[tion] 4029?”; “[I]f the Treasury Secretary agreed to extend the CARES Act supported Fed lending facilities, would the Fed be able to continue making loans under these programs consistent with Sec[tion] 4029?”. While litigants before a court could raise unanticipated or novel arguments not addressed here, a court presented with these questions would likely conclude that the answer to both questions is “yes.”

New social bond funds that target booming issuance could find it difficult to diversify initially due to a limited pool of deals and issuers as the nascent market faces similar issues to the early days of the green bond market. As social bond issuance is limited to government agencies, development banks and banks, new funds could face higher single name concentration risk, which could potentially be negative for ratings unless they are able to invest more widely. 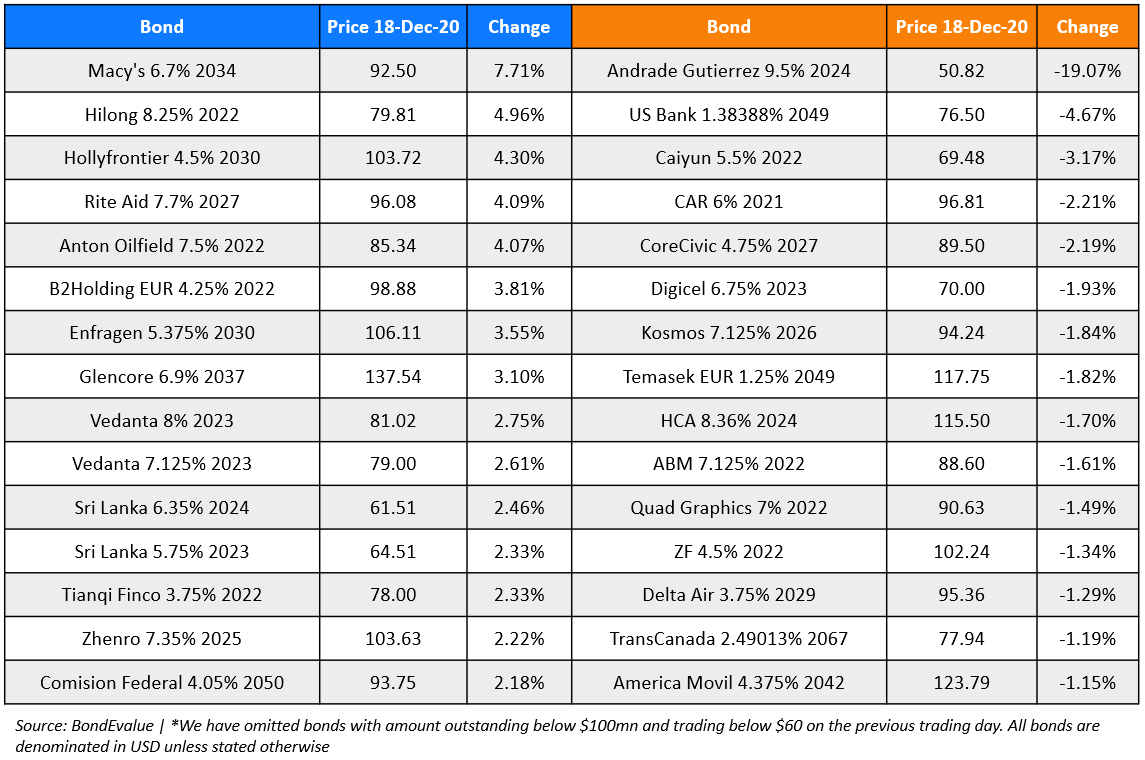