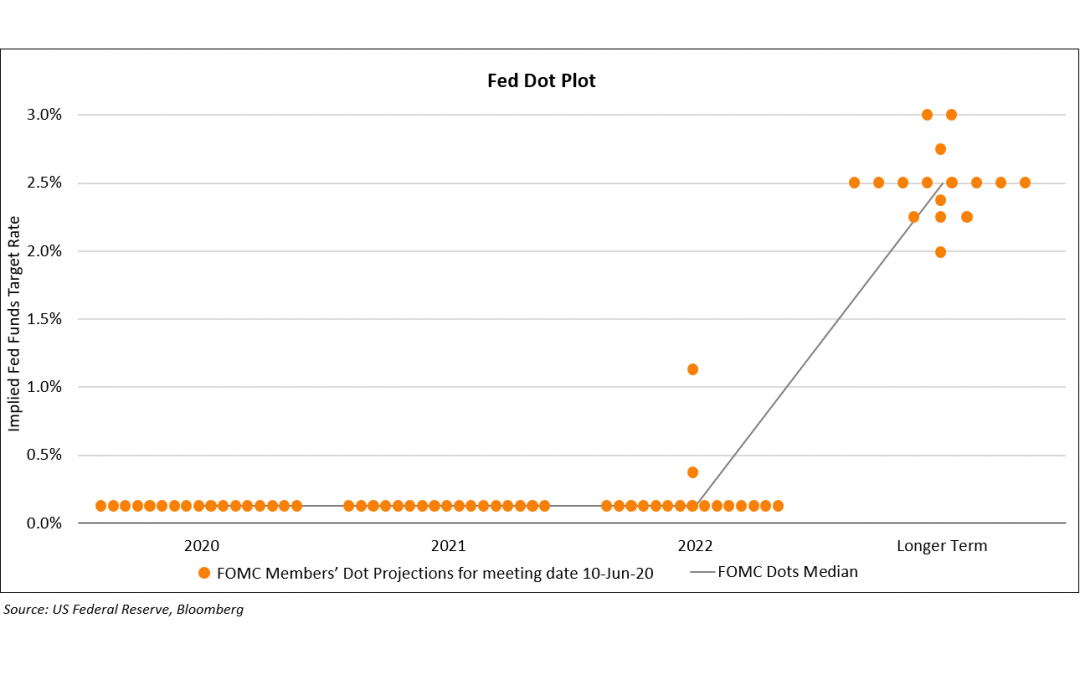 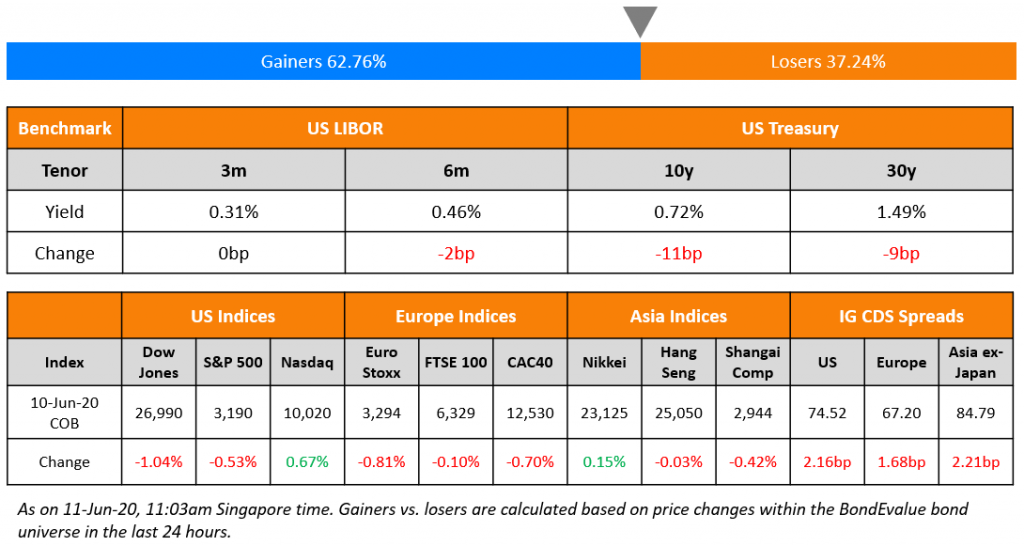 Markets have turned defensive after a gloomy FOMC meeting where Fed officials said that they would keep interest rates close to zero until at least the end of 2022 and that it would take years to bring joblessness back to pre-pandemic levels. The mostly unchanged policy statement had an expected dovish tone. The Fed is expecting the US economy to contract by 6.5% this year, with unemployment settling at 9.3%, and this has reinforced expectations that the central bank was settling in for an extended fight against the economic shock triggered by the virus. Wall Street retreated with the exception of Nasdaq, which outperformed on the back of gains for Apple and Microsoft. With stocks at these record levels and bond markets with yields at record lows, there is a disconnect between the two. Treasuries rallied sharply showing the market’s preference for safe haven and also fortified by the Fed’s pledge to continue providing extraordinary support, including maintaining its current rate of bond purchases at around $80bn a month for government debt and $40bn for agency bonds and mortgage-backed securities.10-year Treasury yields rallied 11bp to settle at 0.72%. Asian markets are opening lower by 0.5-1.0% and Asian dollar spreads widened after 11 straight sessions of tightening. Primary markets remain busy.

The Fed published a dot plot (Term of the day, explained below), something they have been using since 2012, to give markets forward guidance on where the committee thinks the central bank’s key short-term interest rate will be in the future. This rate is currently in a target range between 0-0.25%. Each dot represents the Fed funds rate for each year that an anonymous Fed official forecasts. There are normally 19 dots, but 2 positions are vacant at the moment. The dot plot below shows that all except 2 officials see rates remaining in the 0-0.25% range till the end of 2022 and most officials see the long term rate around 2.5%. 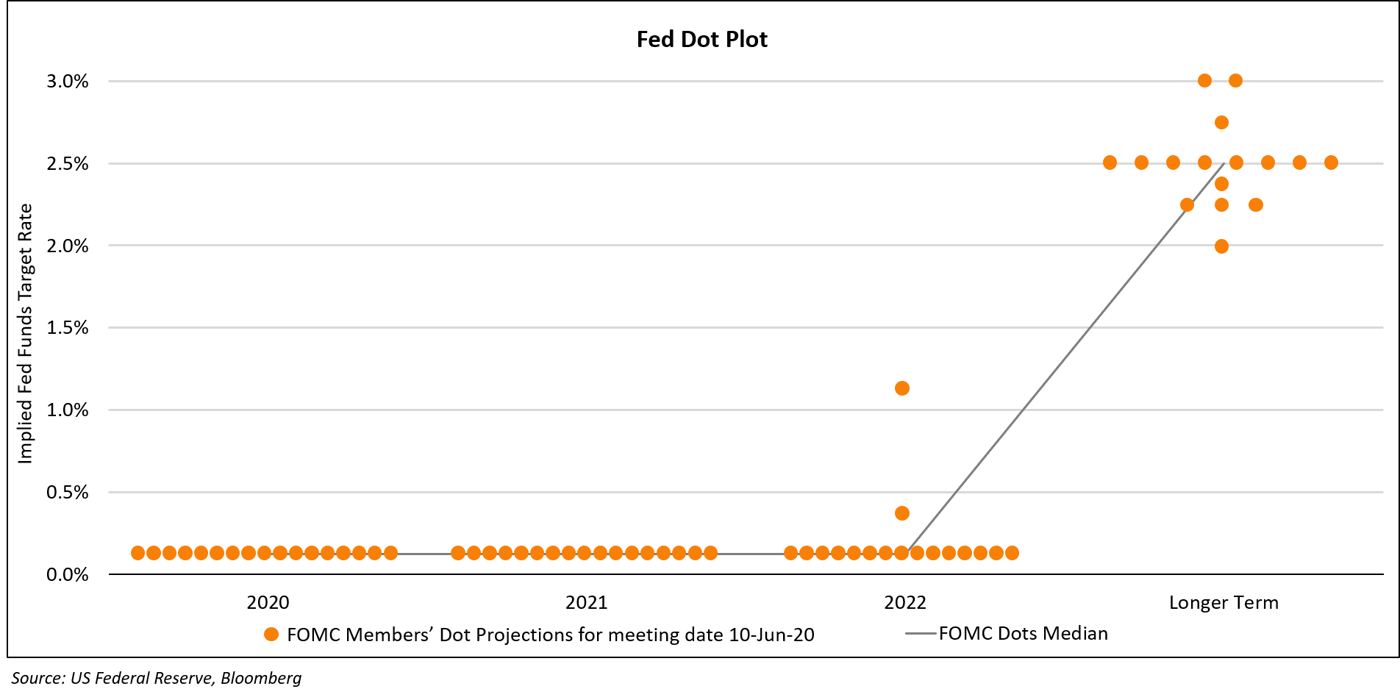 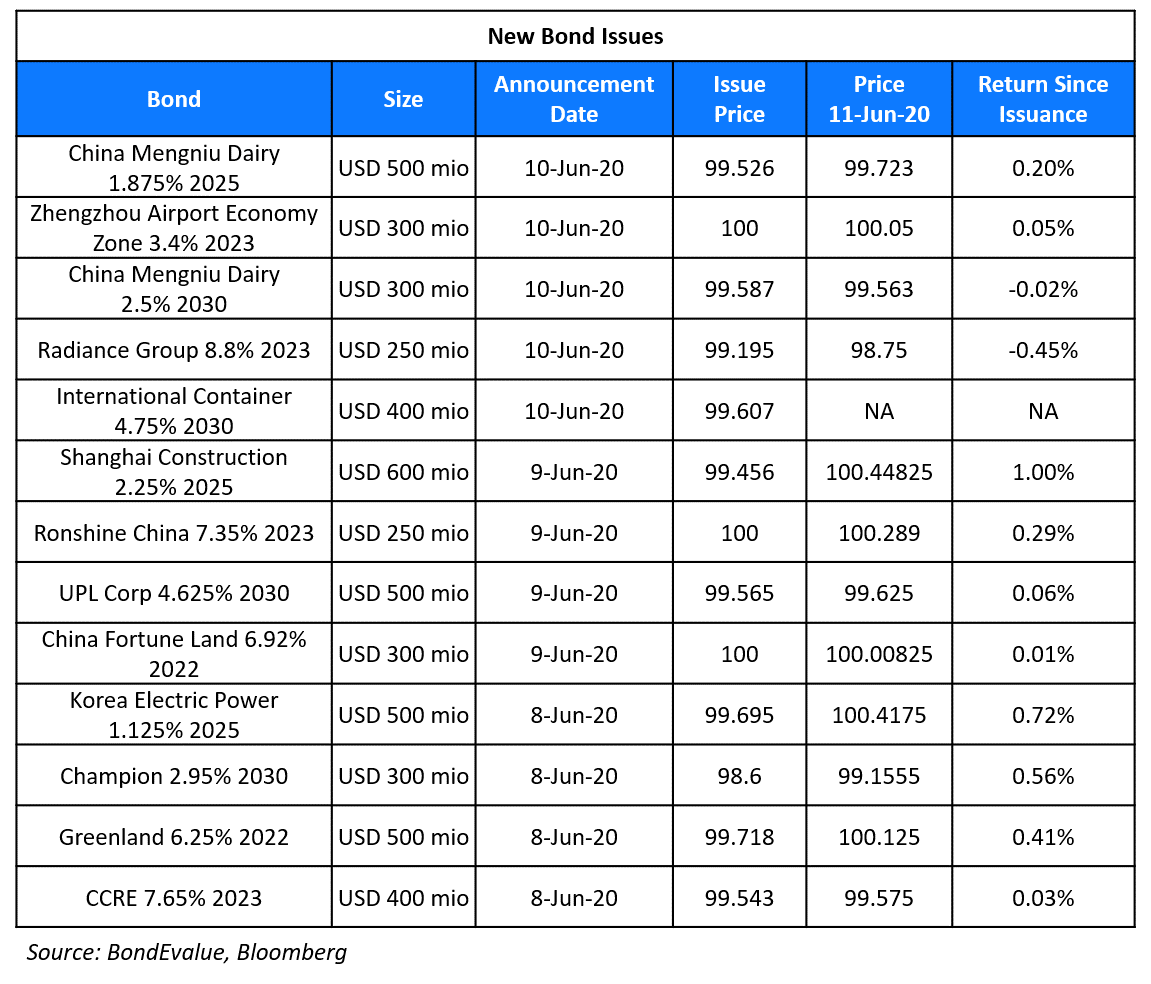 Another developer, Radiance Group raised $250mn via 3.25Y non-call non-put 2Y at a yield of 9.25%, 25bp inside initial guidance of 9.5% area. The bonds, expected to be rated B-/B, received orders worth $1.1bn, 4.4x issue size. The bonds will be issued by Radiance Capital Investments and Radiance Group will be the parent guarantor. Investors can exercise a put option at 100 at the end of two years, while the issuer can exercise a call option at 102.5 at any time on or after two years.

Indonesian state-owned carrier Garuda International managed to restructure its $500mn 5.95% sukuk due June 3 on Wednesday. Garuda received approval from 90.88% of the sukuk holders to amend the sukuk terms, following which the airline will extend the maturity by three years and waive covenants until operations resume to normal. 89% of the holders approved the proposal by the “early-bird” deadline of June 1, which entitled them to 1.25% of principal. The payment fell to 0.5% of principal for holders that gave their approval between June 1 and 8. The sukuk dropped from ~98 in late February to 40.5 on March 20, and traded up since then to 60.6 cents on the dollar currently. The company is also in talks with the government about a potential bridge loan but nothing has not been confirmed.

Delta Air Returns to the Bond Markets With $1.25 Billion Issue

American airline Delta Air Lines Inc. returned to the bond markets with a $1.25bn 5Y bond, issued to yield 7.375%, 62.5bp inside initial guidance of 8% area. The bonds are rated BB by S&P Global Ratings, inline with Delta’s issuer rating. The S&P has assigned a recovery rating of 4 for the bonds, which indicates S&P’s expectation that lenders would receive average (30%-50%; rounded estimate: 30%) recovery of their principal in the event of a payment default. Delta last tapped the bond markets in April with a $3.5bn 5Y bond, issued at a yield of 7%. The older bonds have rallied since issuance and are currently trading at 107.2 with a yield of 5.3%. While the older bonds are backed by domestic slots at New York airports and Heathrow in London, the new bonds are not backed by collateral.

S&P affirmed India’s BBB- investment grade rating with a stable outlook on Wednesday. The rating agency also affirmed India’s the short-term rating at A-3. While the agency forecasts the government’s fiscal deficit increasing to 11% due to the pandemic and the government spending, the ‘stable’ outlook reflects its expectations of a sound recovery. The analysts also acknowledged the rising risk to India’s long term growth. This could be potentially mitigated by good execution of the ongoing economic reforms and the judicious consolidation actions of government finances as the economy gradually re-opens. The downside pressure on the rating action could be due to the failure of a recovery in GDP growth from 2021 as well as increasing net government deficit levels. Moody’s had downgraded India’s rating to Baa3 with a negative outlook earlier in the month. Although, now the sovereign rating by both agencies are aligned, with S&P’s outlook more optimistic.

India’s forex reserves are approaching the half a trillion mark for the first time on the back of robust foreign fund flows. According the the Economic Times, India’s foreign reserves currently stand at $493bn, sufficient to fund 17 months of imports. As per the story, India has already surpassed Russia and South Korea to become the third-largest holder of foreign reserves after China and Japan, and will consolidate its position further when it reaches the $500 billion mark.

Some Light at the End of the Tunnel for Macy’s

Macy’s announced on June 8 that they have raised approximately $4.5bn to combat the impact of the pandemic. There are two main parts to this financing: (1) $1.3bn in debt financing and (2) $3.15bn in an asset based credit agreement. Macy’s has said that, as a result of this financing, it expects to have “sufficient liquidity” to address the needs of its business, including the purchase of fresh merchandise for the upcoming selling seasons. They also said that this financing will help them with resolving the accrued payable obligations and repaying upcoming debt maturities in 2020 and 2021. The funding will mature in May 2024, and includes a short-term facility of $300mn that will mature in December this year. As per the agreement, the company can request increases in the facility of up to an additional $750mn. “We are pleased with the strong demand from new investors in our notes issuance, which allowed us to tighten pricing and increase the size of the offering,” Macy’s Chief Executive Jeff Gennette said in a statement Monday.

The news was well received by investors as its stock closed 9% up on Monday and its bonds are among the top gainers today, as can be seen in the table below. Its new $1.3bn 8.375% bonds due 2025 announced on May 29 are up 3.5 points since issuance and currently trade at 103.5 on the secondary markets.

Shares of the biggest rental car fleet in China, Car Inc, surged as much as 10% in Hong Kong as the head of Luckin Coffee Inc, Lu Zhengyao, resigned as the chairman of Car Inc. This was after Caixin, a Beijing based business news provider, reported that regulators had accessed emails indicating Lu’s involvement in the financial fraud, which has engulfed Luckin Coffee. SCMP had reported on June 1 that Lu’s UCAR had agreed to sell its shares in Car Inc to Beijing Automotive Group, following a stake sale in April. As per Car Inc company sources, the company could avail loans of about $168mn (RM714.34mn) on a fast track if Lu ceased to be the director of the company. Luckin is a fast growing coffee chain and was seen as a potential competitor to Starbucks till it came under investigation by both the US Securities and Exchange Commission as well as regulators within the home country for fraudulent financial transactions to manipulate its revenues.

Lucror Analytics, an Independent research firm, forecasts a dip in the operational profits due to the slowdown and also over the corporate governance of Car Inc. Car Inc’s dollar bonds have been volatile amidst the pandemic’s effects on the car rental sector and also the fabricated sales scam of Luckin Inc, which owned 21.26% stake in the Hong Kong listed Car Inc as on June 1. The June 1 announcement and the gradual opening of the economy, saw an upswing in the bond prices of Car Inc in the beginning of the month, which cooled off over the last week. The bond prices seem to be stabilizing and the 8.875% dollar bonds due in 2022 fell by 1.75 points to 65.75 cents on the dollar, a drop of 2.6%, and its 6% dollar bonds fell by 1 point to 77.25 on the dollar, a drop of 1.3%, over the last one day. 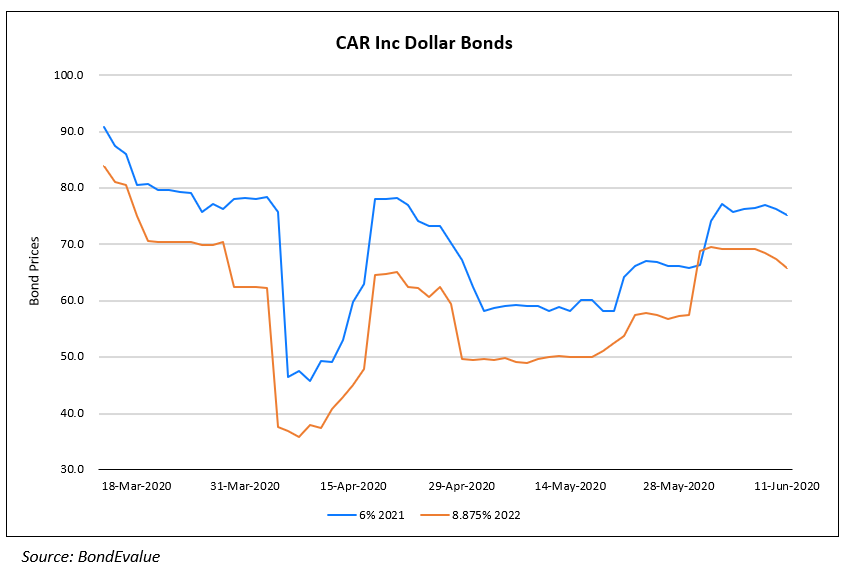 Italy’s Treasury embarks on the issuance of a new bond called ‘BTP Futura’ exclusively targeting retail investors. Italy plans to borrow funds to the tune of €500bn to fund the stimulus to the economy in response to the Coronavirus pandemic. BTP Futura is likely to have a maturity of between 8Y-10Y and the first tranche will be sold from July 6-10. These are likely to be offered to mom-and-pop individual investors who can invest as little as €1000. A second issue is also likely to be launched in the summer. To incentivize bond holders, the yield will increase over time and a loyalty bonus linked to Italy’s GDP will be provided to investors who hold the bonds to maturity. There has been a growing interest in bonds in Europe. We covered the “Strong Demand for Pandemic Bonds in Europe”  covering the UK, Ireland and Greece yesterday.

The Fed dot plot is a visual representation of interest rate projections of members of the Federal Open Market Committee (FOMC), which is the rate-setting body within the Fed. Each dot represents the Fed funds rate for each year that an anonymous Fed official forecasts. The dot plot was introduced in January 2012 in a bid to improve transparency about the range of views within the FOMC. There are usually 19 dots for each year, but 2 positions are currently vacant, which is why the latest dot plot has 17 dots.

Sri Lanka is locked in talks with the IMF for emergency-financing aid, after its second longer-term program with the fund in less than a decade expired last Tuesday. Sri Lanka could avoid a debt restructuring, but it would need hard decisions and reset of the economy,” said Saurav Anand. “Markets fear that given limited fiscal space, if there is a delay in resorting to corrective actions,” a renegotiation of the payment schedule will soon become inevitable.

Sri Lanka’s external debt makes up more than half of their GDP, and Fitch Ratings calculated about $3.2 billion of payments due between May and December this year. The overall debt ratio for Sri Lanka has climbed past 90% of GDP, as per a JPMorgan report. Sri Lanka’s notes have lost about 33% this year, with its spread over U.S. Treasuries climbing more than 2,400 basis points in May, according to JPMorgan Chase & Co. indexes. Its yield premium was about 1,700 as of June 5, more than double that offered by its peer in the region which are rated in the single B-grade category: Papua New Guinea.

“Hong Kong is underpinned by a very strong financial sector…and a monetary system that is anchored to rules, and well governed and well understood by the world,” Geoffrey Okamoto said at a roundtable teleconference. “Hong Kong is important not just to China but to the rest of world.”

This statement comes after China’s parliament recently approved a decision to go forward with national security legislation for Hong Kong. Democracy activists, diplomats and people in the business world fear that this legislation will jeopardise Hong Kong’s semi-autonomous status and role as an international financial centre. 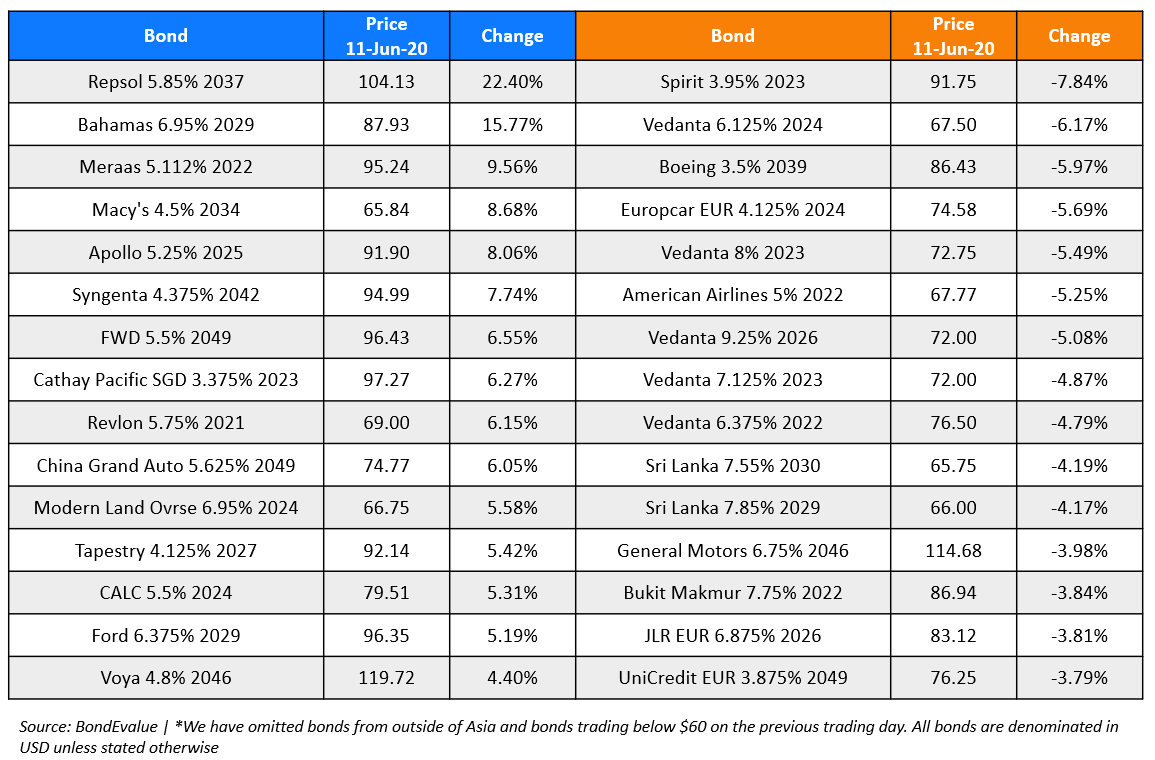