The Record-Setting ‘Bubka’ Bond Market of 2020 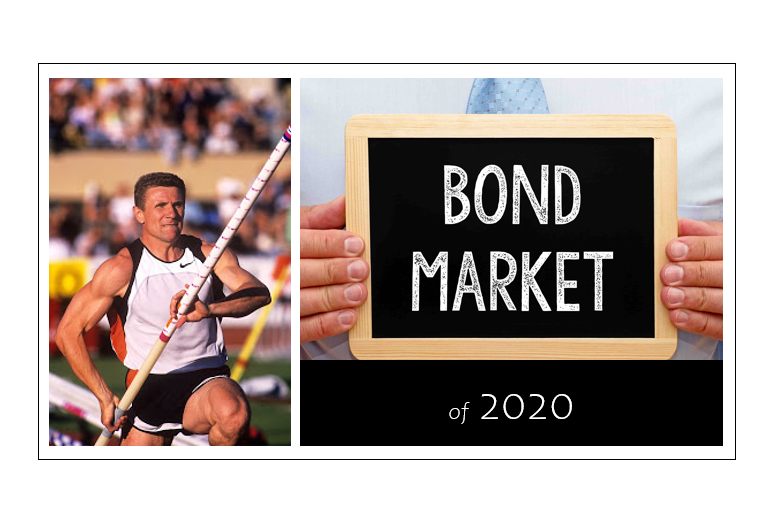 2020 has been a record-setting year for the bond markets, particularly in terms of new bond issues. We have seen new records being set and subsequently broken time and again through the year, reminding us of Ukrainian pole-vaulter Sergey Bubka. Bubka set his first world record of 5.85m in late May 1984 and subsequently improved his record to 5.88m a week later and 5.90m a month later. He went on to improving his own records over the next 10 years and set a career total of 35 world records!

The primary bond market has had a similar run with multiple records being smashed through the year.

New bond issues from junk rated corporates in the US broke 2012’s record with a issuance volume of $329.8mn in 2020 through end-September. With three months remaining in the year, this record is set to be broken with every new high yield bond issuance between October and December-end.

In the table below, we have listed US corporate bonds with an investment grade rating and tenor of 3 years – sorted by lowest coupon. 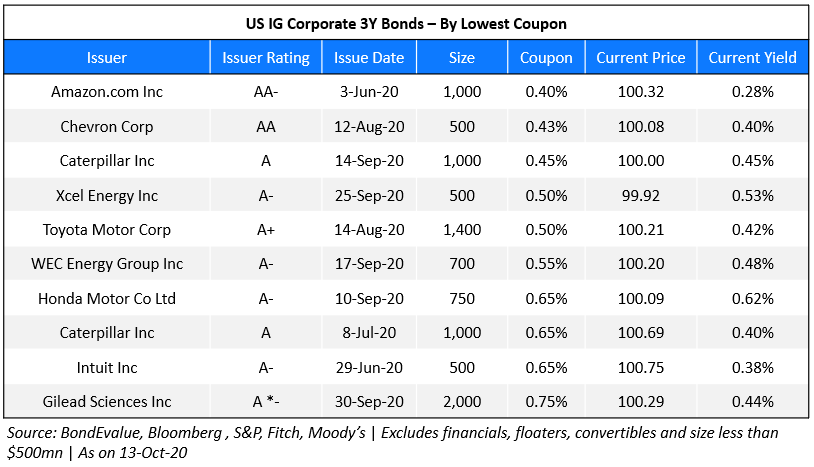 All the bonds that made it to the list of top 10 lowest coupon were issued in 2020. Low interest rates globally on the back of the pandemic has pushed bond yields to new lows, allowing higher rated corporates to lock-in record low coupons with new bond issues.

Interestingly, the corporate that topped the charts was not a conventional conglomerate but rather a tech company – Amazon. The Jeff Bezos-led tech giant, rated AA-, set the record for the lowest coupon ever on a 3Y dollar bond at just 0.40% with a razor thin spread of 25bp over Treasuries.

A similar trend was seen for bonds with a 5-year tenor. 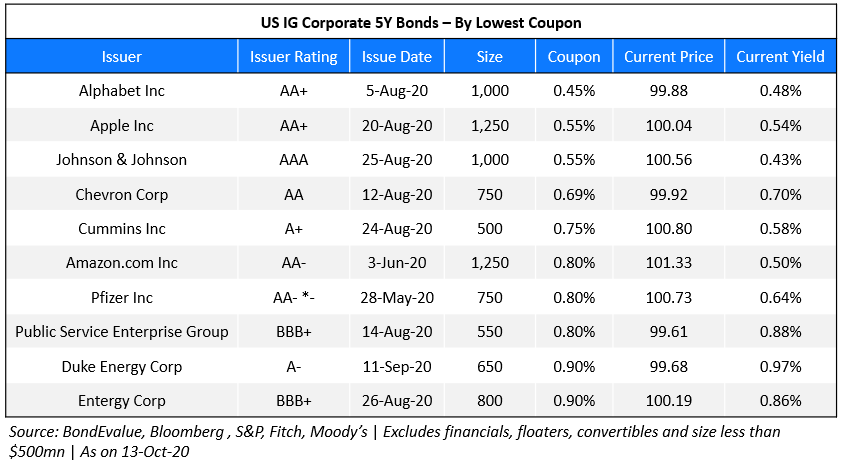 Another tech giant, Google parent Alphabet topped the charts for lowest coupon bond with a 5Y tenor. The record was first broken by pharma major Pzifer Inc with its $750mn issue in late May paying a coupon of 0.80%. It was then matched by Amazon’s $1.25bn issuance in June and broken by Alphabet Inc in early August with its $1bn bond paying a coupon of 0.45%, also 25bp over Treasuries.

High yield bonds too set records on the primary markets, albeit for the highest coupon. The ill effects of the pandemic were exacerbated for high yield or junk rated issuers. Strict lockdowns led to plummeting economic activity and revenues, while operational and debt servicing costs kept piling up. Junk issuers, finding themselves in a liquidity crunch turned to the primary bond markets in desperate need for cash.

In the table below, we have listed the top 10 bonds with a 3-year tenor from high yield issuers – sorted by highest coupon. 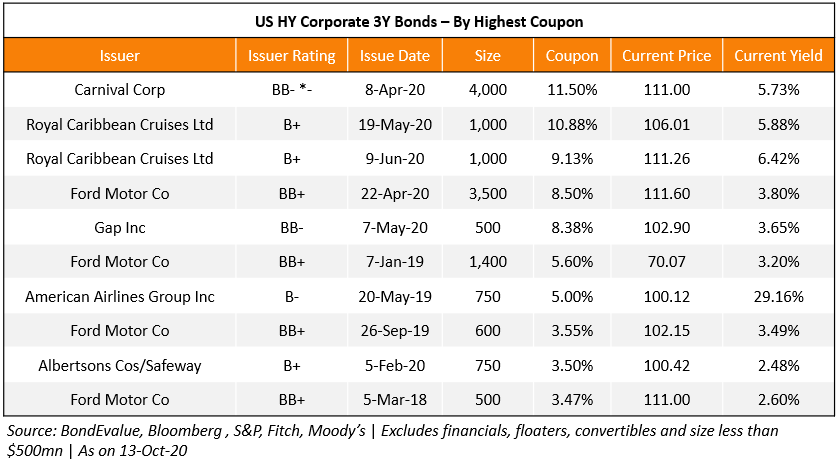 Travel was one of the worst-affected from the pandemic as consumers spent all of Q2 and most of Q3 at home. The record for the highest coupon on a 3Y bond from a junk issuer was set by cruise operators Carnival Corp paying 11.5%. Carnival, the largest cruise operator in the world, was rated A3 prior to the pandemic in October 2019. The rating was cut to Baa3 in early April, when the highest coupon bond was issued. Since then, its rating has been cut to B1 (seven notches lower to A3) as on early October 2020. Investors that bought the bonds at primary issuance are today sitting on an unrealised gain of ~11% as the bonds trade at 111 on the secondary markets. 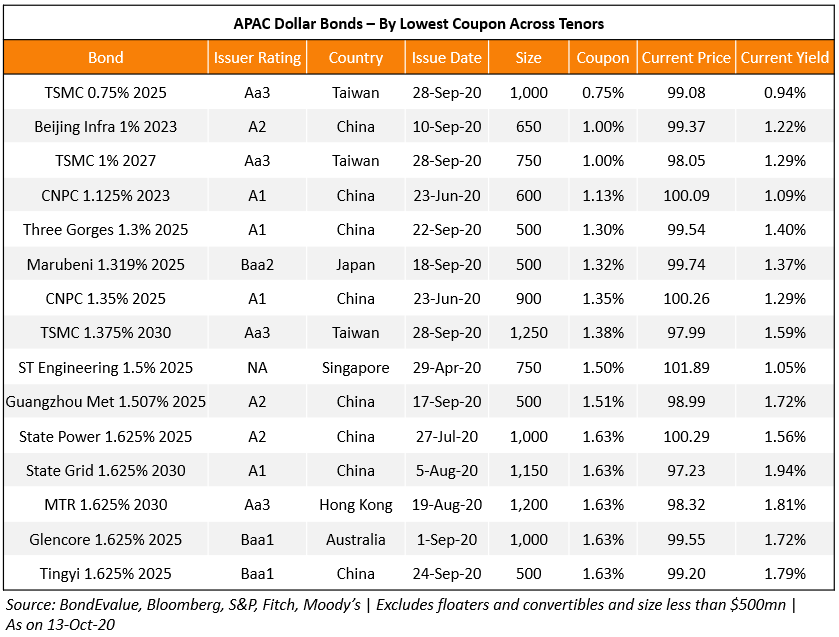 All of the bonds on the list were issued in 2020. State-owned corporates dominated the list while China dominated in terms of country of risk of the corporate issuers. Singapore-based ST Engineering first broke the record for the lowest coupon in April with its $750mn 5Y bond paying a coupon of 1.5%. Since then, the record has been broken thrice – China National Petroleum Corp’s (CNPC) $600mn 2023s paying 1.125% issued in June, Beijing Infrastructure’s $650mn 2023s paying 1% issued in early September and Taiwan Semiconductor’s $1bn 2025s paying 0.75% issued in late September.

AT1 Perpetual Bonds from Banks – Record for the Lowest Coupon

Banks too capitalized on the low interest rate environment to raise funds via perpetual bonds that comply with Basel III Additional tier 1 (AT1) capital. These securities are popular among private investors as they offer a higher coupon vs. senior bonds to compensate for their loss-absorption capacity. In the table below, we have listed dollar AT1 perpetual bonds – sorted by lowest coupon. 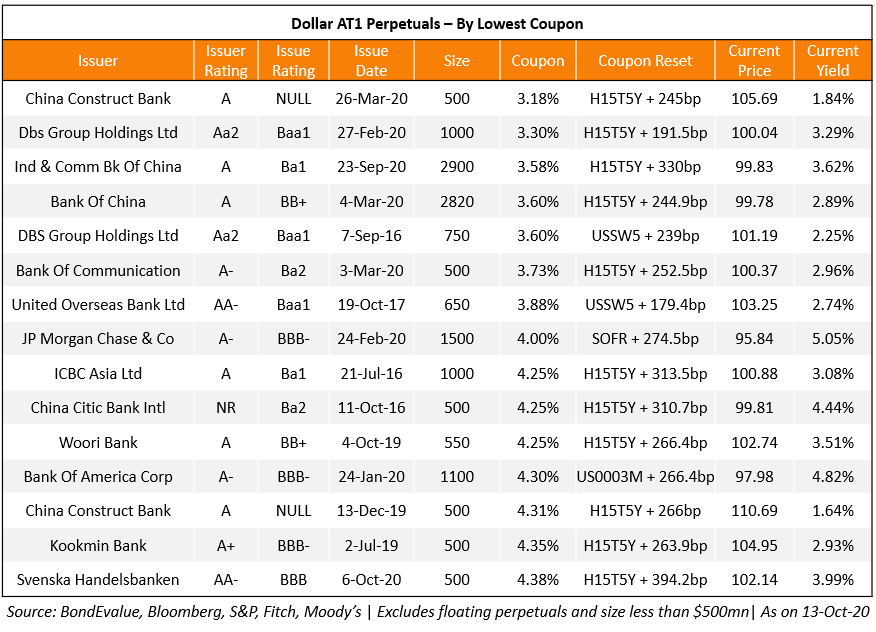 2020 also saw the record for the lowest coupon on a fixed-for-life perpetual bond being broken with Hong Kong-based CK Asset’s $300mn 3Y bond paying 3.8%, beating Allianz’s record low coupon of 3.875% on its perpetual issuance in 2016. With the Fed announcing its intent to hold interest rates at current low levels through 2023, we are likely to see more records being broken over the next few quarters.