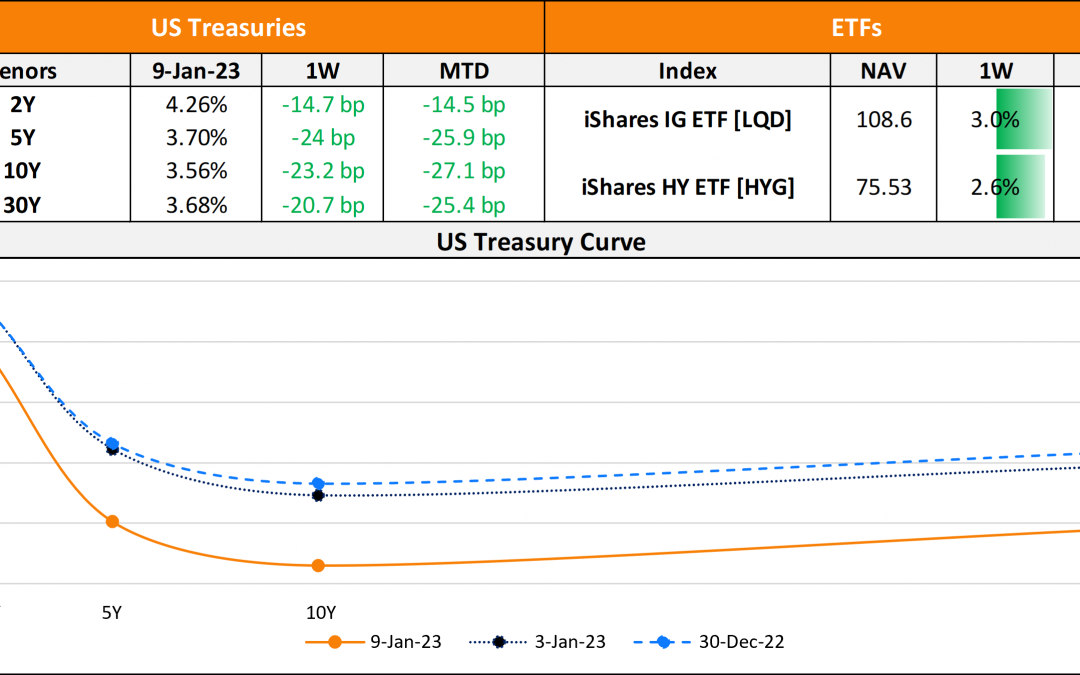 Issuance volumes shot higher regions last week – global dollar deals totaled $103.8bn last week, over 5% of the total deals in 2022. US primary market issuances stood at $23.6bn last week. IG issuances stood at $20.85bn led by by John Deere’s $2.3bn and Duke Energies’ $1.8bn dual-tranchers each. HY issuances stood at $2.75bn with Ford Motor’s three-trancher being the only deal. In North America, there were a total of 6 upgrades and 11 downgrades across the three major rating agencies last week. As per Lipper data, US IG funds saw $1.69bn in inflows in the week ended January 4 vs. $2.3bn in outflows in the week prior. HY funds saw $2.23bn in outflows after an addition of $102.9mn in the previous week.

LatAm saw $4bn in new deals last week with Mexico’s two-trancher being the sole deal. In South America, there were no upgrades and 14 downgrades across the major rating agencies. EU Corporate G3 issuance stood at a massive $68.9bn with banking majors dominating the tables – SocGen raised $5bn via a four-part deal, followed by Credit Suisse and StanChart leading the tables raising $3.75bn and $2.5bn via dual-tranchers each. Also BNP Paribas raised €1.25bn via a PerpNC7.5 AT1 bond at a yield of 7.375%. Overall EU G3 issuances last week were about 6% of last year’s total deal volumes and 69% higher than the volumes during the first week of 2022. Across the European region, there were no upgrades and 3 downgrades. The GCC G3 primary bond market saw no new deals last week. Across the Middle East/Africa region, there were 2 upgrades and no downgrades each across the three major rating agencies.

APAC ex-Japan G3 issuances were at a strong $18.9bn, over 8% of 2022’s overall issuance volumes. led the tables with Hong Kong SAR raising $4.3bn equivalent multi-currency trancher followed by KEXIM and NAB raising $3.5bn via a three-tranche deals. Also, AAHK and Indonesia’s $3bn deals helped push up deal volumes. In the APAC region, there was 1 upgrade and 4 downgrades combined across the three rating agencies last week. In the coming week, more Asian issuers are expected to sell global bonds. This includes names like EXIM India, Malaysia, Philippines SK Hynix, Woori Bank amongst others.