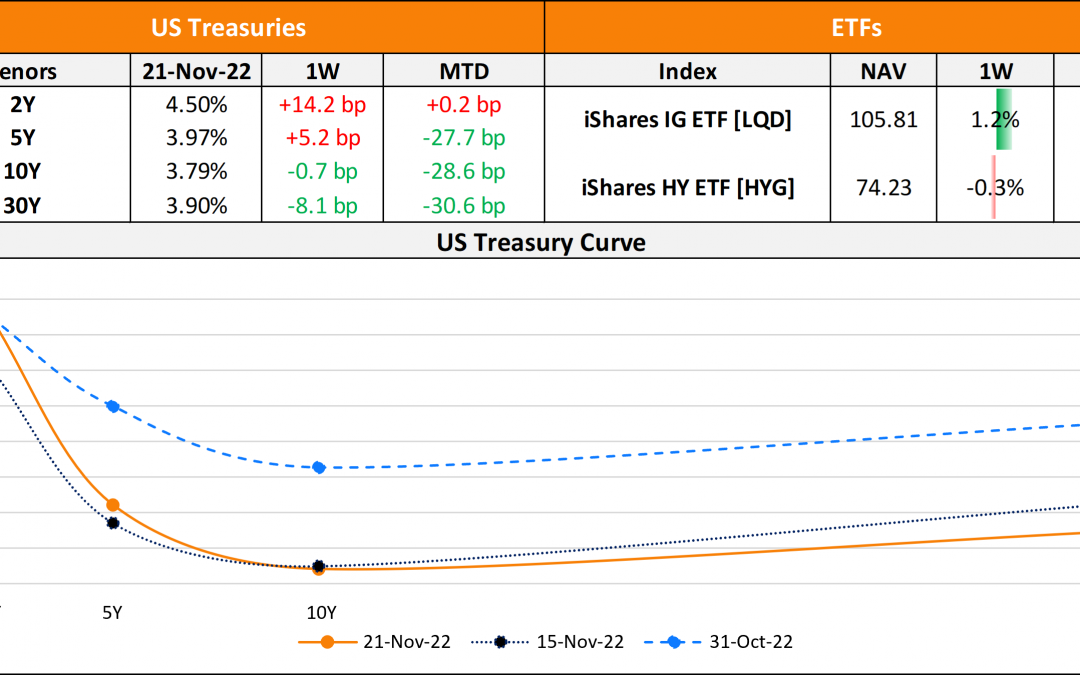 US primary market issuances were lower last week at $20.2bn vs. $39.5bn in the week prior. IG issuances dominated at $19.9bn led by Philip Morris’ $6bn five-part issuance and Thermo Fisher’s $1.2bn two-trancher. The remaining $300mn in deals were from unrated issuers, with no new deals from high yield issuers. In North America, there were a total of 40 upgrades and 67 downgrades across the three major rating agencies last week. As per Lipper data, US IG funds saw $895mn in outflows in the week ended November 16, a thirteenth straight week of outflows while HY funds saw $2.93bn in inflows, a fourth straight week of inflows. LatAm saw $1.5bn vs. $691mn in new deals with the Panama sovereign being the sole issuer. In South America, there were no upgrades and 15 downgrades across the major rating agencies. EU Corporate G3 issuance saw a dip to $34.2bn vs. $41.1bn a week prior with banks dominating the tables – ING Groep and BPCE raised €1.75bn and €1.5bn respectively followed by SocGen and Santander raising $1.45bn each. Across the European region, there were 30 upgrades and 37 downgrades. The GCC G3 primary bond market saw $1.1bn in deals vs. $210mn in the prior week led by Banque Saudi Fransi’s $700mn deal and Mashreqbank’s $500mn deal. Across the Middle East/Africa region, there were 7 upgrades and downgrades each across the three major rating agencies. APAC ex-Japan G3 issuances were at $6.6bn vs. $5.2bn in the week prior led by Australian banks – National Australia Bank (NAB) raised $3bn via a dual-trancher, followed by Macquarie Group’s $1bn and Westpac’s €750mn deals. In the APAC region, there were 9 upgrades and 11 downgrades combined across the three rating agencies last week.