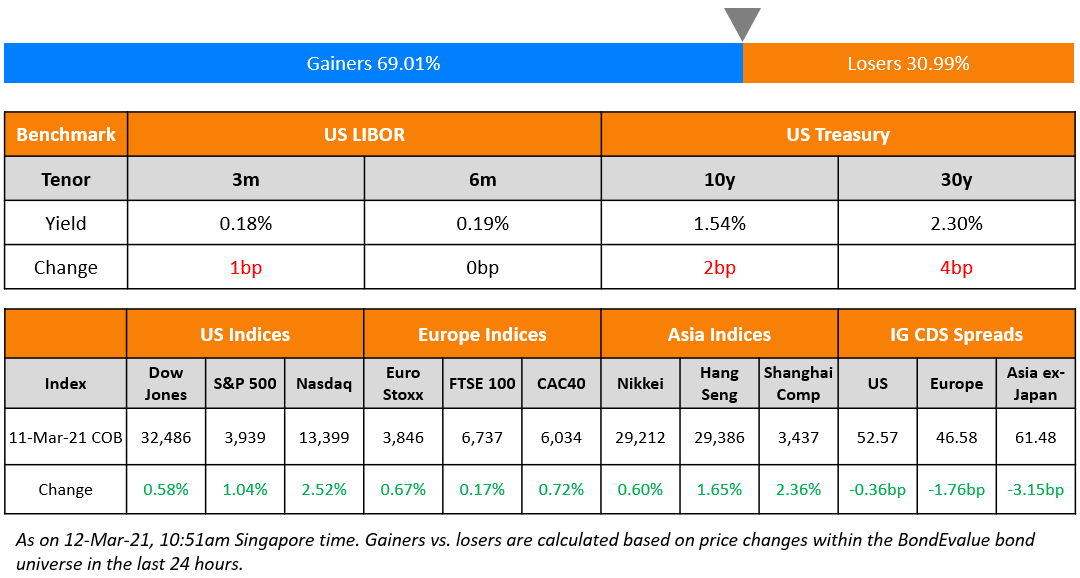 US equities saw another day of gains with S&P 1% higher, Nasdaq 2.5% higher and the VIX index near a fortnightly low as risk-on sentiment picked up. US 10Y Treasury yields were stable at 1.54% with the jobless claims for the prior week falling by 42k to 712k, the lowest since November. President Joe Biden signed his $1.9tn stimulus bill into law. European equities saw modest gains with the DAX and FTSE up 0.2% while the CAC was up 0.7%. The ECB signaled that it would ramp up bond purchases under its PEPP over the next quarter, which led to German Bund yields falling by 4bp to -0.36% before recovering. US IG CDS spreads were 0.4bp tighter and HY was 4.3bp tighter. EU main CDS spreads were 1.8bp tighter and crossover spreads tightened 9.4bp. Asian equity markets are mixed with China and Hong Kong lower while other indices are higher 0.3%. Asia ex-Japan CDS spreads were 3.2bp tighter.

We are also conducting a complimentary webinar “Navigating The Bond Markets by Leveraging The BEV App” to help users exploit the BondEvalue app to manage their bond portfolio on the WebApp as well as the Mobile App. 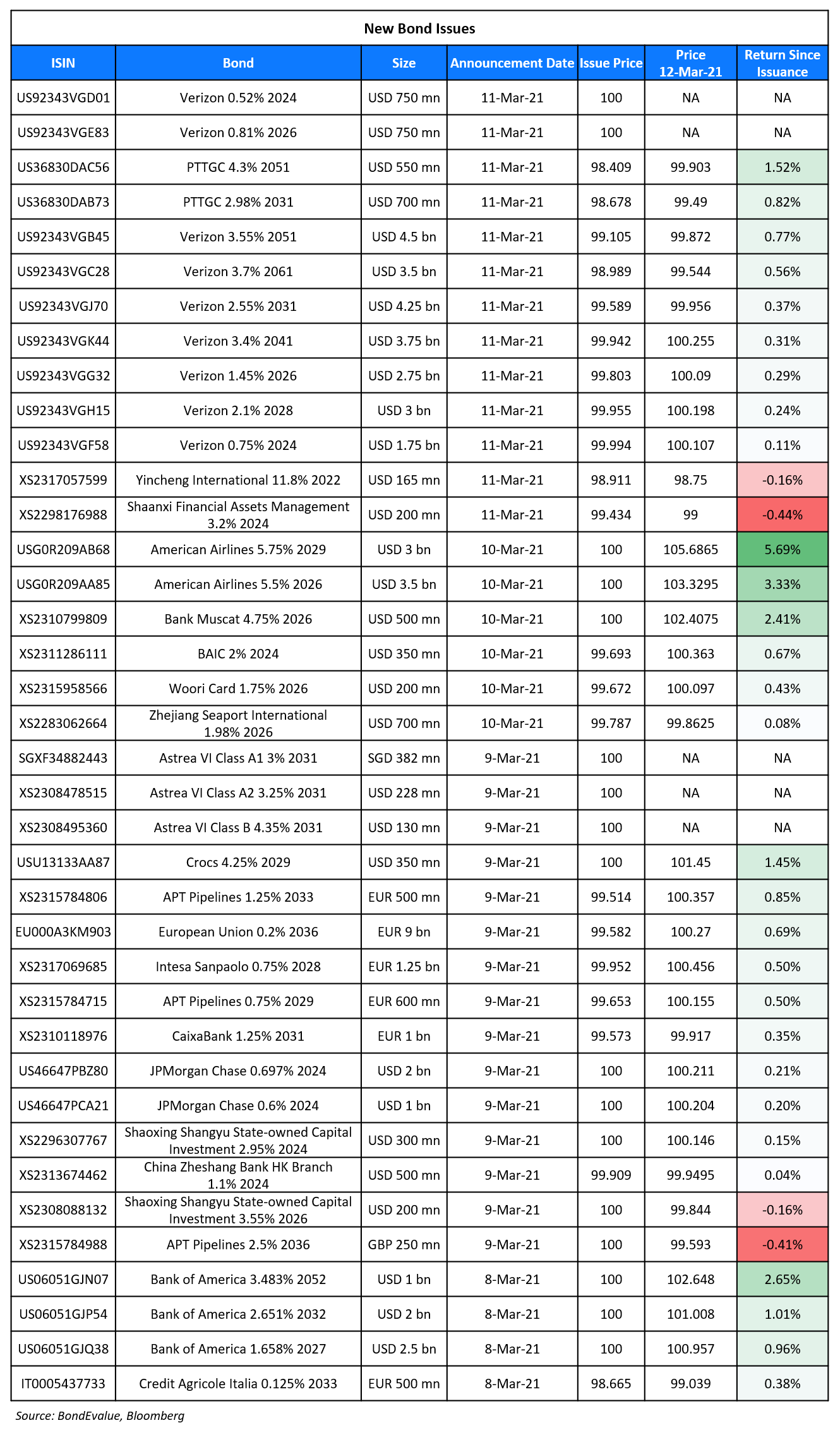 The bonds have expected ratings of Baa2/BBB. There is a coupon step-up of 125bp if a change of control event is triggered. The bonds will be issued by wholly-owned subsidiary GC Treasury Center under PTTGC’s $2bn global medium term note (MTN) programme. The bonds will be unconditionally and irrevocably guaranteed by PTTGC. Proceeds will be used for general corporate purposes, debt repayment, acquisitions/investment activities and on-lent to entities within the group.

Shaanxi Financial Asset Management raised $200mn via a debut 3Y bond at a yield of 3.4%,10bp inside initial guidance of 3.5% area. The bonds have expected ratings of Baa3/BBB. Proceeds will be used for general corporate purposes and working capital purposes. As per IFR, the company is the only local AMC in Shaanxi Province that focuses on distressed assets and is ultimately owned by the provincial government.

Yincheng International raised $165mn via a 364-day note at a yield of 13%. The bonds are unrated and proceeds will be used for debt refinancing and general corporate purposes.

“At times when you’re seeing volatility in the developed markets like you’re seeing now, it’s a good place to keep your cash,” said Vij. “China government bonds are as good an asset as U.S. Treasuries when looking at long-term correlations versus global stocks.”

“Treasuries’ role as a safe haven is not there anymore,” said Chen. “There is an increasing possibility of using China bonds as an alternative.” “China has a lot of work to do in terms of boosting liquidity for investors and build some financial infrastructure to enable people to do futures,” said Chen.

“From a relative value perspective, all stars are aligned,” said Sambor. “We’re likely to see rotation not only from low yielders in emerging markets but also from global markets into China.”

“Every CIO we’re talking to is now making their first allocation to China,” said Briscoe. “This is the single largest change in capital markets in anybody’s lifetime.”

“That may suffice if today’s decision is seen as a credible signal to intervene and put some sort of flexible lid on market rates,” he said. “The signal may be more important than the actual quantities.”

“A normalization of interest rates owing to a strong COVID recovery is natural,” said Chan. “That said, the speed and volatility of the path towards normalization is more of a concern.”

“When liquidity is tight, it pays to have Hui Ka Yan’s network of wealthy friends,” said Silvers. “Hui’s fund-raising methods may raise questions regarding the true depth of market support for Evergrande’s ventures.”

Maggie Hu, assistant professor of finance and real estate at The Chinese University of Hong Kong

“This once again demonstrates Evergrande’s unbreakable business partnership with its close industry friends,” said Hu. “Since the alliance is often strategic and long term, it substantially reduces cash flow stress for the company.” 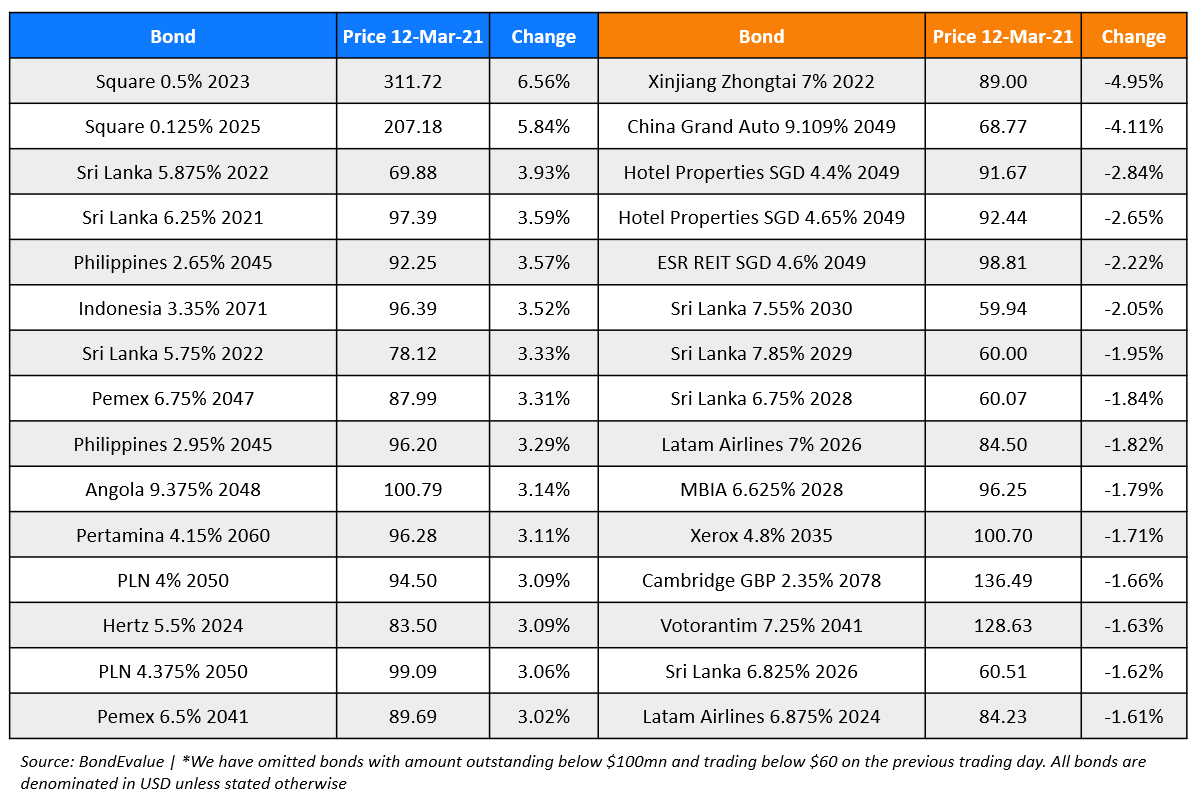