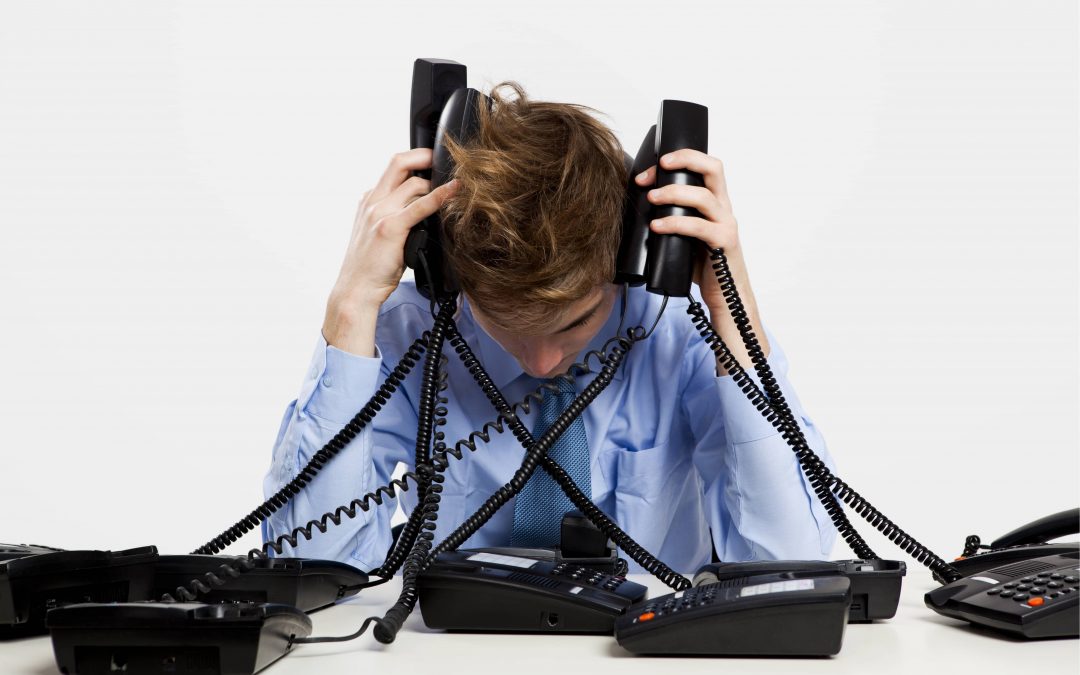 Let’s just say it – bond markets are weird! Everyone involved knows it. In good times, its time-honoured rules, traditions and structure work reasonably well. They work exceptionally well for its middlemen and don’t serve the remaining members of the “exclusive” club too badly.

Bond and credit markets are the lifeblood of a functioning capitalistic society. Yet, bonds are accessible only to society’s wealthiest because of the individual bond certificate’s high minimum denomination – generally USD 200,000 or its equivalent in other local currencies. Even weirder is the fact that one can trade in bonds only through the trading desks of financial institutions. There are very few established, transparent exchanges or trading venues for bonds where investors can trade transparently.

Let’s digest these two points slowly and understand how the bond market is still stuck in the middle ages while the equity, FX and all other major markets have become fully electronified. But before that, a quick recap of what happened in the bond markets for the last few weeks. Bond prices fell across the board until the Fed announced desperate stimulus measures, which included direct buying of corporate bonds, Bond prices have been relatively stable since then.

“I was worth double-digit millions of dollars, and now I am under severe pressure from my private bankers to post margins. I have only two bank accounts and all that I have is in them, investments, savings, everything.”

“I wanted to sell my **MCO bond fund but I got a bid that was 10 points lower than its mark. I thought I would rotate out and buy equities, so the loss was bearable. But my “sell” trade did not go through.”

“We will make a market if you insist, but you won’t like the numbers”

“Exim bank was marked at 102 a couple of weeks ago and now it is suddenly at 79. I told my bank that I would like to buy some; haven’t heard back from them.”

“I tried to buy bonds every day last week and kept increasing my bid by 1 point every day. Hardly got anything.”

“I thought I was under-leveraged until the bank changed its advanced rate from 70% to 35%. Instead of having “dry-powder”, I am at the brink of a margin call”

The comments above indicate a lot of anguish among bond owners and those who wished to buy into the market opportunity. As a collective market, we had both buyers and sellers, but the market was lacking the mechanism to match them.

These issues don’t exist in the equity market. As an example, HSBC shares may have gyrated up and down, but everyone knew where they were trading, exact to the second decimal place. Every buy or sell order was passed onto the exchange where the stock trades. Exchanges have clear rule books, processes and surveillance to ensure that the market operates efficiently, which led to higher volumes. Exchanges are the only way to structurally fix the bond markets. 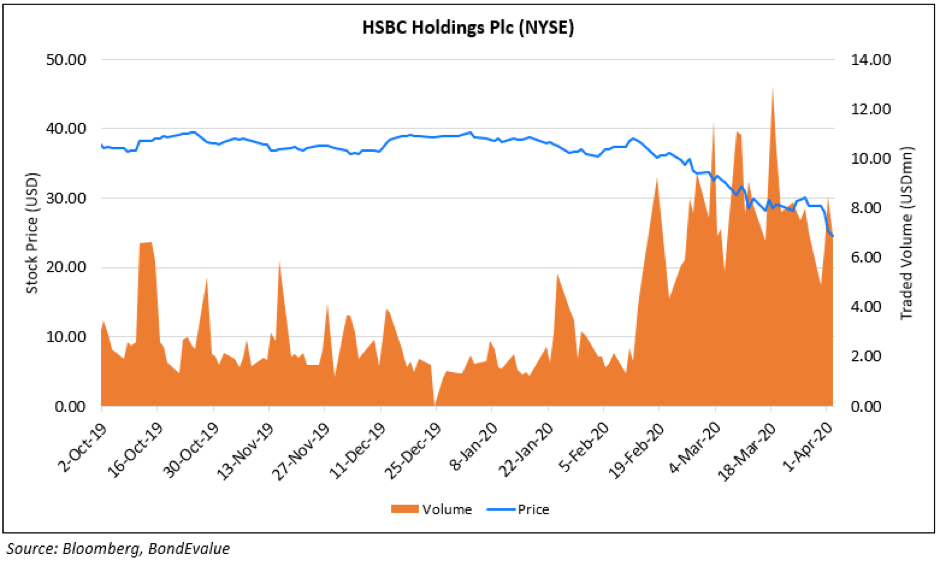 Stuck in the Past with OTC

In contrast to how exchanges work, the corporate bond market is still almost entirely phone based or over-the-counter (OTC). Investors call their relationship manager to sell a bond, who in turn calls an investment counsellor, who in turn calls the internal bond execution desk, and then the order goes to the street which has zero risk appetite. The search then begins to find a buyer who wishes to by the exact same bond in the same quantity.

Until the global financial crisis of 2009, bond dealers had significant appetite to hold bonds, so when the incoming phone call from an end-client was received the dealer could make him a price and buy or sell the bond. Today dealers hold negligible amount of inventory, and this is a reason why the crises is potentially even graver than the previous one.

The graph below shows how corporate debt holdings among primary dealers in the US have dropped over the years indicating this lack of risk appetite. 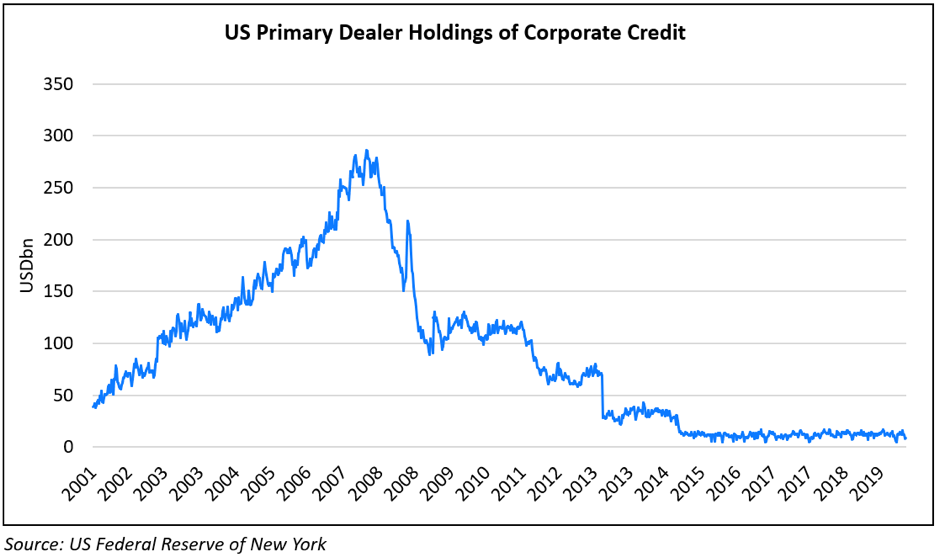 There is a parlour game called Telephonie or Chinese Whispers that is played with hilarious results. When the markets are stable, everyone is calm and somehow the market functions. But in a crisis, the sequential nature of phone calls clogs everything up. Investors faced with a very-short window to fill margin requirements rush to sell in what appears to be a one-sided market. The next day with brighter prospects there is a rush to buy. This type of a bullwhip effect is mitigated in stocks due to them being traded on an exchange where everyone has a “direct” view of what is transacting.

By moving to exchanges, we will have other advantages too. The settlement cycle will speed up from 48 hours currently, holders of securities will be known and most importantly, prices will be transparent and so will the mark-to-market. Every buy or sell order will be visible to the entire market, hence giving it the maximum chance of getting executed.

The naysayers will dig out arguments centred around the fact that there are too many bonds in the world and not all of them trade every day. In a world where General Motors is making ventilators and the movements of each individual on the planet are being monitored in real time, the tech challenges around making bonds tradable on exchanges, while not trivial, are solvable. Perhaps the solution lies in starting with the largest issuers and most liquid bonds. One tech advancement that can play a crucial role is Distributed Ledger Technology or blockchain. Since the bond market is global and trades globally as one, this no longer nascent technology is the way forward.

Next, let us look at the issue of minimum investment (or denominations). Barring the Berkshire Hathaway A share that is currently trading at $274,000 for a single share, most shares’ prices are kept at lower levels via stock splits initiated by companies’ CFOs as it increases liquidity in the company’s shares. Recently there is a trend to have fractional shares as well, with the mighty Charles Schwab launching the service.

The majority of the world’s bonds trade with a minimum denomination of $200,000, putting it out of reach of the vast majority of the world. Last week, Standard Chartered bank issued a bond that pays a coupon of 4.644%. However, you needed to have a minimum of $200,000 to participate in the bond issuance. In comparison, if you walked into the Standard Chartered bank branch to deposit your savings, you will get a near zero deposit rate. While the risk profile of the two instruments is different due to the long tenor of the bond, the large ticket size prevent investors who understand the risk from participating in it. Interestingly one can buy equity quite easily which by definition is a riskier asset class.

In an uncertain world, the need of the hour is to have diversified portfolios which a simple investing mantra that almost all investors understand. But this can’t be practiced in the bond market because of the denomination issue. Asset managers do provide diversification but can charge anywhere from upwards of 1% in fees. In the current low interest rate environment, fees of 1%+ eat up a significant proportion of the total return for a bond fund.

While there is no substitute for good advice, appropriateness and investor education, the industry does need to move to smaller ticket sizes. This will involve getting rid of the centuries old tradition where bonds were issued by kings in Europe to their barons and other nobility to finance the kingdom. Fractional bonds will allow the “not so wealthy” to invest like the wealthy.

The plague of 1345 caused the end of the Lombard banking system. Let us hope that the COVID-19 crisis spurs us on to replace the plumbing in the bond market so that central banks never need to bail it out ever again.

BondEvalue is a Singapore based fintech that has been given a sandbox approval by the MAS to create a DLT based Bond Exchange that allows investors to transact in $1,000 lot sizes.