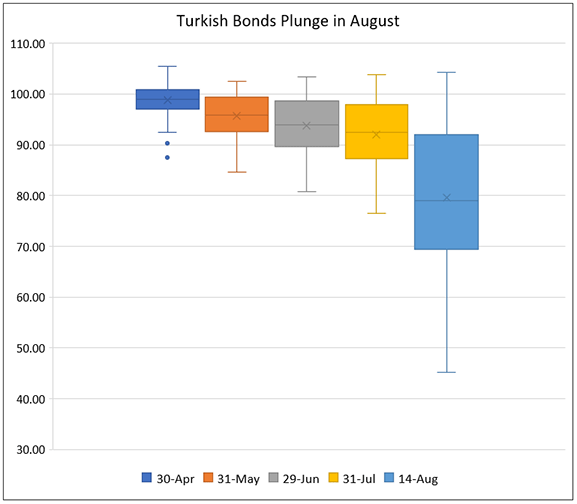 Bonds issued by Turkish issuers are going through an unpleasent summer with the lira down 42% since the start of 2018. While bonds were falling throughout spring in tandem with the rest of emerging market bonds, they continued to fall in July and the proverbial bottom has fallen off in August.

USD 8.6 billion or 14.3% of total amount outstanding (USD bonds with Turkey as country of risk) has been erased in market value since the end of July. Of the 10 worst performing bonds (in terms of price) within our universe in August, all 10 are from Turkey. This crisis in Turkey has been driven by multiple factors including political tensions, mounting inflation and more recently, US sanctions on Turkish steel and aluminium.

Stay updated on Turkish bonds through the crisis on the BondEvalue iOS App or Android App . We have coverage of all USD and EUR (REG S) bonds from Turkey with an outstanding of over USD 200 million.

The worst-affected sector of the crisis has been the Turkish banks, as seen from the table below. The 73 Turkish bank bonds in the BEV universe have lost an average of 16.2% since the end of July and an average of 22.2% since the end of April. The slide in the lira has led to fears of rising bad loans at Turkish banks, given their exposure to foreign currency borrowings. Turkish banks are thus staring at the risk of a rapid depletion in capital (bank’s assets minus liabilities). Depletion of bank capital exposes it to the risk of having insufficient funds to meet its obligations. This is evident from the sharp sell-off in Turkish banks’ bonds with Garanti Bank’s 6.125% 2027, Turkiye Is Bankasi’s 7% 2028 and YapiKredi’s 8.5% 2026 bonds falling by 24%, 41% and 32% respectively, in just 2 weeks! 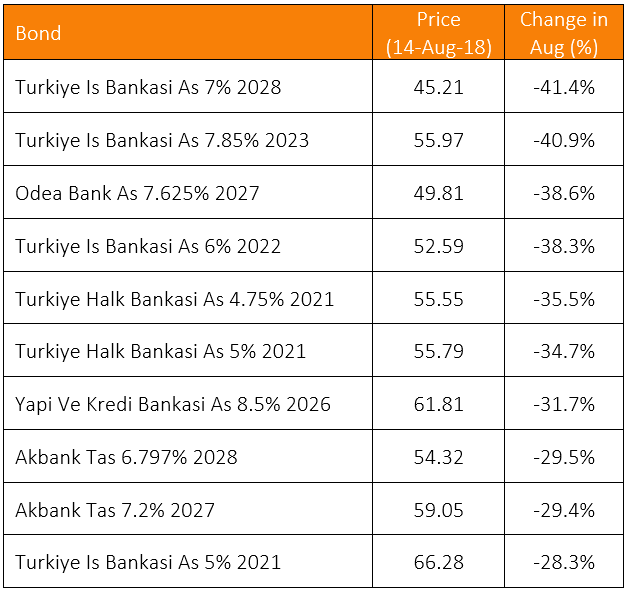 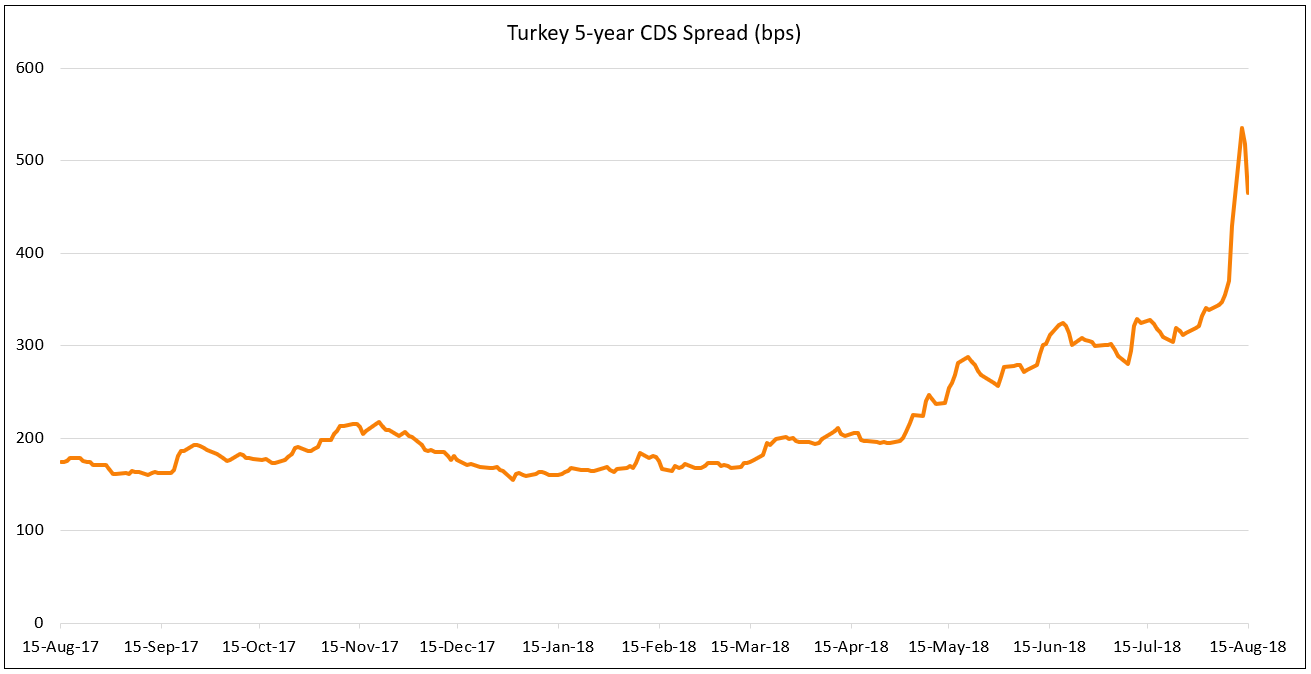 The ripples of the Turkish crisis are being felt in Europe, given the exposure of European banks to Turkey. Spain’s BBVA own 49.9% of Garanti Bank, Italy’s UniCredit indirectly owns 40% of YepiKredi through a joint venture and BNP Paribas has operations in Turkey. The grave situation in Turkey has worsened due to the lack of serious measures taken by the central bank. This has been attributed to the clout of President Erdogan over the Turkish Finance Ministry, headed by his son-in-law. President Erdogan is a self-proclaimed hater of high-interest rates, describing it as “the mother and father of all evil”.

The crisis in Turkey has led investors to shift to safer assets, as seen from the rally in U.S. government bonds late last week. The yield on the benchmark 10-year Treasury note fell 2 bps to 2.87% while the yield on the 30-year Treasury bond dropped 4 bps to 3.04%. The Turkish 10-year yield hit a high of 22.82%, its highest level back through 2010.

Global trade tensions have had Treasuries trading in a range. Even as there is upward pressure on Treasury yields with increased auction sizes, where in early August, a record $26 billion in 10-year notes was auctioned, demand due to flight to quality or safety have kept yields low.  Investors continue to monitor trade tensions between Washington and its former trade partners, Russia and China.  Both the U.S. and Chinese governments most recently announced the possibility of imposing tit-for-tat tariffs on an additional $16 billion worth of goods.