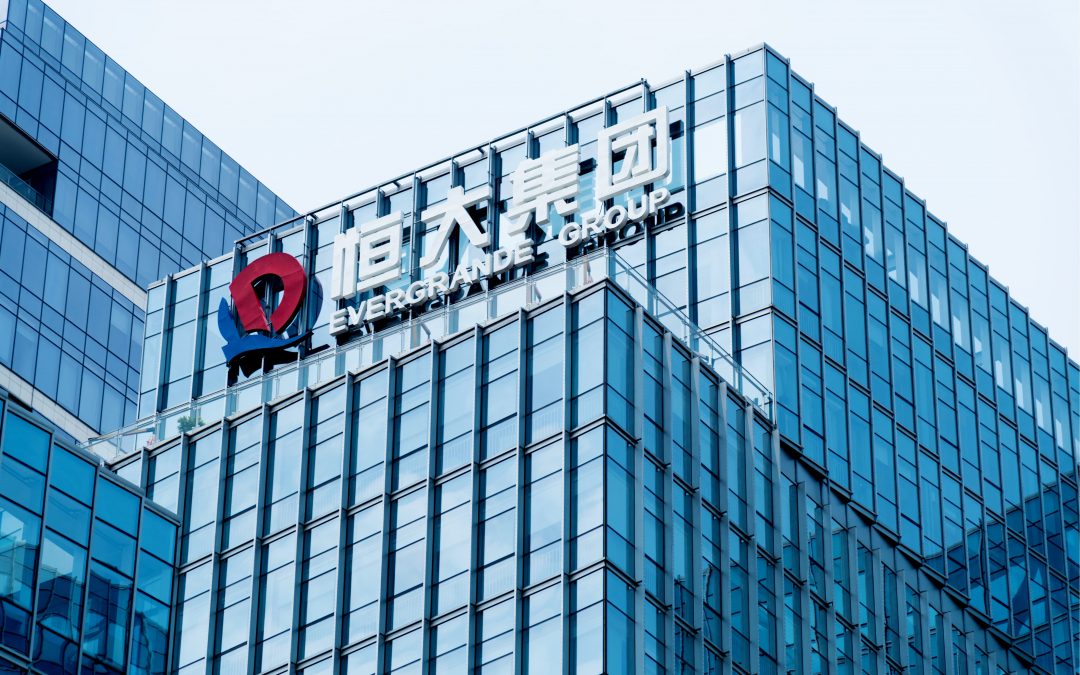 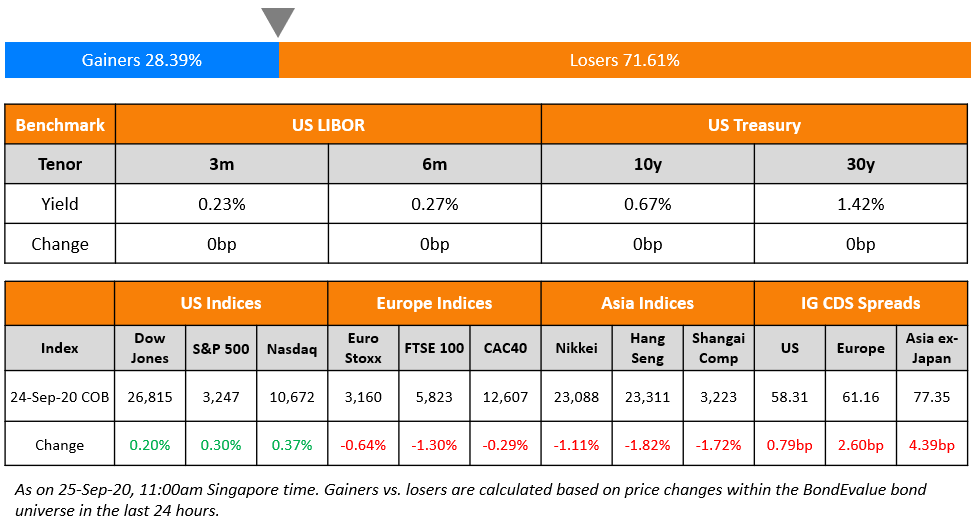 S&P, which has been leading Asian markets, ended marginally higher by 0.3% with most sectors in the green. 10Y US Treasury yields were slightly changed and Asian equities are higher by ~0.5% today after several days of losses. US jobless claims once again disappointed at 870,000 for the week ending September 19 with the labor market momentum slowing. US IG CDS widened 3bp intraday but ended 0.8bp wider and HY was nearly flat. US high yield ETFs have erased gains for this year after witnessing five consecutive sessions of withdrawals totaling $3.3bn. Meanwhile, FTSE Russell mentioned it will add Chinese bonds to its index aligning with expectations. 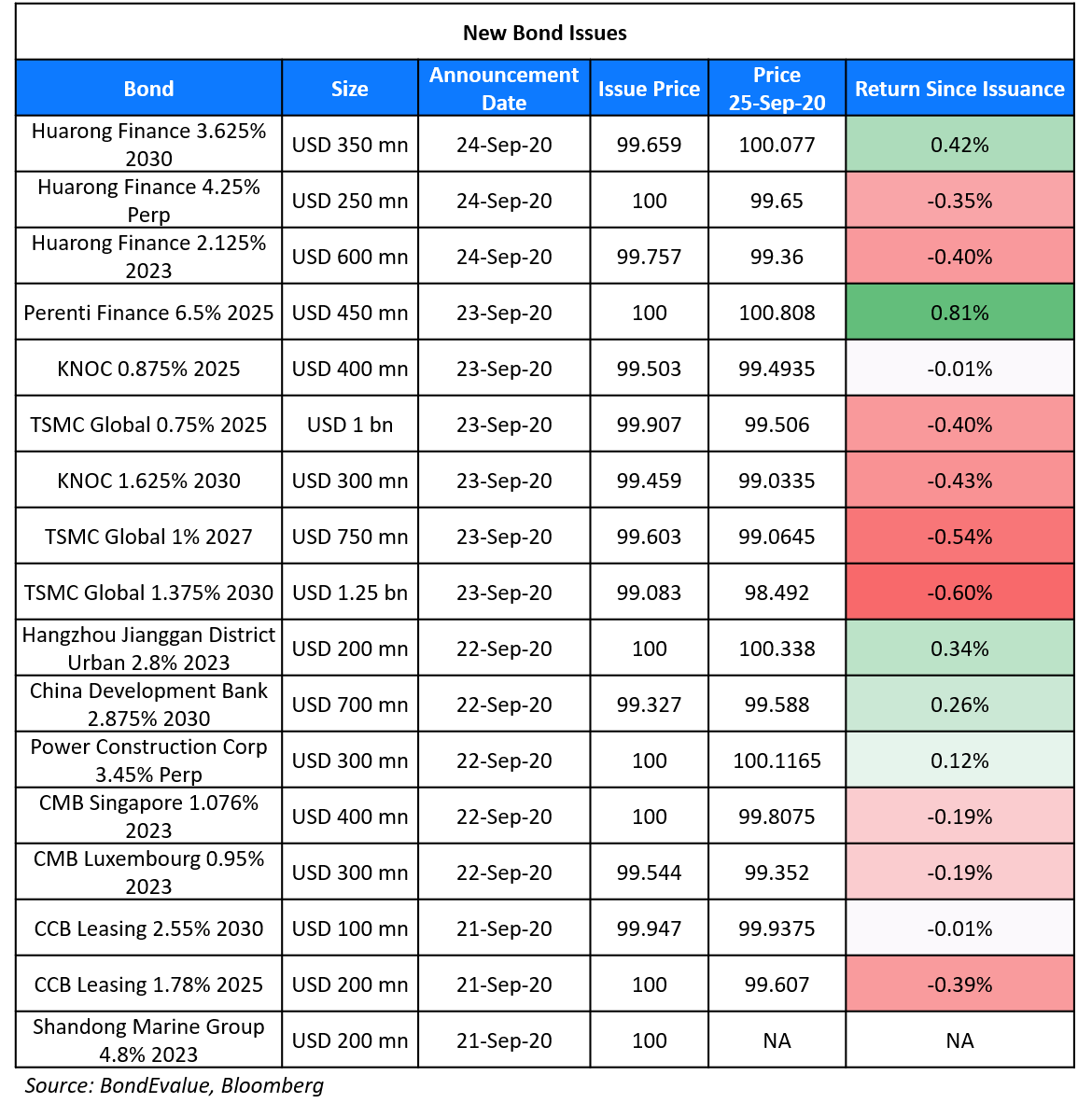 China Huarong Asset Management raised a total of $1.2bn via a three-tranche bond offering. It raised:

The 3/10Y bonds have expected ratings of Baa1/A while the PerpNC5 has an expected rating of BBB. Final orders for the three-tranche issue exceeded $3.6bn, 3x issue size. Huarong Finance 2019 is the issuer and China Huarong International Holdings is guarantor.

OCBC raised S$200mn ($145.4mn) via a privately placed AT1 perpetual non-call 10Y issuance at a yield of 3%. The bonds are expected to be rated Baa1, six notches lower than its issuer rating of Aa1. If not called in 10 years, the perp’s coupon will reset every 10 years to the SOR plus a spread of 219bp.

Fitch Revises Engie S.A.’s Outlook to Negative; Affirms at ‘A’

Turkey Hikes Interest Rates by 2% In a Surprise Move

The Turkish central bank raised its policy one-week repo rate by 200bp to 10.25% against expectations for unchanged rates. Apart from a handful who expected a hike, others expected some measures to tighten the supply of money. The central bank mentioned the primary reason for the hike was owing to inflation rising faster than they expected given strong credit momentum (domestic credit growth up 41.5% YoY in July) and financial market developments (Lira down ~20% year-to-date). With Consumer Price Inflation (CPI) at 11.77% in August and the current policy rate hike, the real rate is negative for local depositors. The rate hike “is a step in the right direction”, said Kieran Curtis at Aberdeen Standard Investments. Turkey also has to work on its overall economic status with forex reserves falling to $43bn from nearly $80bn at the start of the year leading to Moody’s downgrading the cross-continental country to B2. Besides political risk, Turkish President Erdogan fired the prior central bank governor Murat Cetinkaya in July 2019 before his term ended due to disagreements on their interest rate policy. Yesterday’s decision to hike could spark a tiff leading to more instability later given the precedent – the current governor Murat Uysal was the deputy governor before the former’s sacking. Turkey’s dollar 6.25% 2022s fell to 100.57 with yields up over 11bp while its EUR 4.35% 2021s fell to 100.86 with yields spiking 32bp after the event. The Lira rallied over 1% against the dollar to end the day at ~7.6220.

A letter with the Evergrande’s letterhead and stamp appealing for the speedy approval of its 2016 reorganization plan of its subsidiary Hengda Real Estate were doing the rounds on the internet on Thursday. The letter was to expedite the backdoor listing (Term of the day, explained below) of Hengda on the Shenzhen stock exchange by January 31, 2021. If it fails to list by that date, some of Evergrande’s largest strategic investors have the right to demand their money back, as much as CNY 130bn ($19bn), equal to about 92% of its cash balance as per Bloomberg. The strategic investors, including Suning Appliance Group, made an investment in the company in anticipation of an acquisition of Shenzhen Special Economic Zones (SEZ) Real Estate & Properties Group, which would lead to the backdoor listing. This letter stated that the company would be at a risk of default if the approval does not come through in time. This sent bonds of the most indebted real estate developer, which has a debt pile of CNY 835.5bn ($122bn) as on end-June, tumbling 3-4 points on the secondary markets. Its stock also fell by 5% on Thursday but recovered after Evergrande said via an exchange filing that the documents being circulated on the internet are fake. Some investors too shrugged off the letter with a fund manager referring to Evergrande chairman Xu Jiayin (aka Hui Ka Yan), the third richest man in China, saying, “He is too politically shrewd to be writing threatening letters to the government,” he said. “This guy did not get where he is by writing letters like that.” 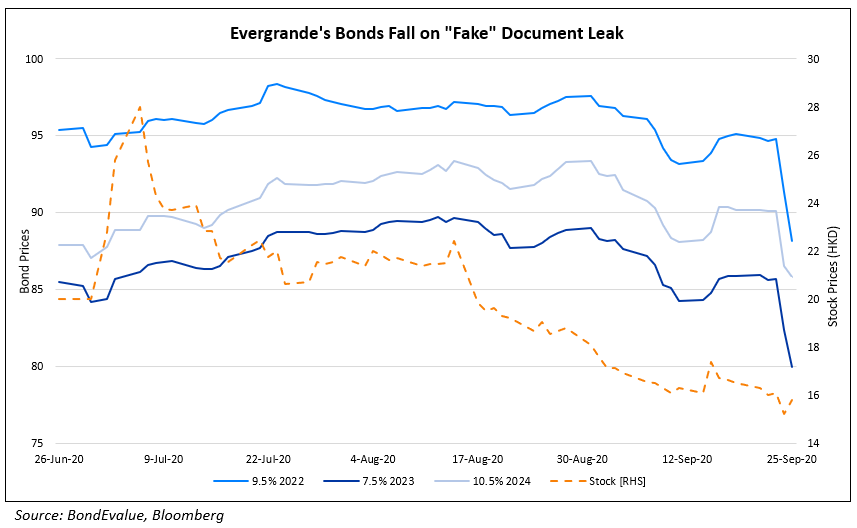 If the strategic investors demand their money back, Evergrande could be staring at a severe liquidity crunch. S&P cited this as one of the reasons for lowering its outlook on Evergrande, Hangde and Tianji Holdings to negative from stable while affirming its rating of B+ on the issuers. It said, “According to our sensitivity analysis, under the scenario where half of the investors redeem, Evergrande’s liquidity sources will only be able to cover slightly more than 80% of its liquidity uses.” However, it added that the risk of a liquidity crunch is still low for now given its efforts to get more strategic investors and access to different means to raise funds.

The demand for ESG (environmental, social, governance) bonds has been on the rise, particularly this year. The following ESG deals were priced over the past few days:

According to Bloomberg, recent ESG issues from Verizon of the US as well as Volkswagen, Daimler and Orange of Europe traded at a lower yield compared to traditional non-ESG bonds, indicating that investors are willing to pay a premium for bonds that have a positive ESG impact.

Union Life Insurance repurchased $21mn in principal of its 3% bonds due 2021 on September 16. This lowered the amount outstanding to $395.608mn vs. the original issue amount of $500mn. The 2021s are currently trading at 93.65, having recovered from a low of ~67 amid the March madness this year. Union Life was downgraded by Moody’s to Ba1 from Baa3 in July on the back of increased exposure to non-standard assets relative to its capital base and weakening solvency, as per IFR.

Hong Kong listed First Pacific bought back $28.8mn in principal of its 5.75% guaranteed bonds due 2025. This brings the total amount outstanding to $131.1mn vs. the original issue amount of $175mn.

Also known as a ‘reverse merger’, this is a method used by private companies to go public without the hassles of filing for an Initial Public Offering (IPO) and related procedures. These private companies instead acquire a controlling interest in a publicly listed company. Once the transaction closes, the public company (aka shell company) issues a majority of its shares to the private company, resulting in the private company having a stock market listing. For example, Hong Kong based company Diginex completed a backdoor listing with 8i Enterprises last year to become one of the cryptocurrency firms to do so. In the case of Evergrande, its plan is to inject its assets into Shenzhen Special Economic Zone Real Estate & Properties Co. in return for shares to list itself in Shenzhen from Hong Kong.

“I really thought that I was pretty much reading out what our September policy statement was saying,” Evans said. He said that he thinks markets should understand that a 2.5% inflation rate for some period of time “is likely in the cards” if the central bank is doing its job right.

On Fed policymakers diverging on outlook for inflation and economy

“I’m very worried that we’re pretty far away from what we think is maximum employment and I think there are going to be significant headwinds to getting there quickly,” Rosengren said.

Bullard said he thought COVID-19 fatality rates were “unlikely to reach the level of March and April”. Improving treatments and increased vigilance among high-risk individuals should allow the economic recovery to continue, Bullard said.

“With rounding, you could even call it on target,” Barkin said

“We are taking a very serious and unnecessary risk if we do not extend federal assistance to out-of-work households,” Evans said.

Erik Meyersson, a senior economist at the Swedish bank Handelsbanken

“Even a dependent central bank can make the right decision from time to time,” said Meyersson. “The lira was moving quite fast in the past week. I think that’s what may have given [the central bank] the political room [to raise rates].”

“It was definitely a surprise,” said Hammarlund, who said the central bank “took the bull by the horns” and took “a step in the right direction”. The move “sends a signal to the market that they are concerned about the weakness of the lira and they realise that they need to contain inflation”, Mr Hammarlund said. However, he added: “It’s simply a reaction to the inevitable.”

“Much more needs to be done to adopt a constructive view on the lira,” said Matys. “Because it has low credibility, it cannot afford to have negative real interest rates,” he added.

On Swedish central bank’s views that the corporate bond market is immature, illiquid and dysfunctional – Heidi Elmer, head of the Riksbank’s market department

“The market is not mature and not functioning well,” said Elmer, adding that it had “very scarce liquidity”.

On Euro zone bond yields dropping over concerns of a second Covid wave – in a note by ING rates strategists.

“The ECB’s pandemic emergency programme still has some 800 billion euros to spend and the regular asset purchase programme also continues to plod along,” ING rates strategists said in a note. “That means there is little let up in the downward pressure on money market rates.”

On the start of IMF talks with Costa Rica about its loan request – Gerry Rice, IMF spokesman

“We commend the authorities’ commitment to build consensus around that economic reform program through a broad-based political and social dialogue,” Rice said. 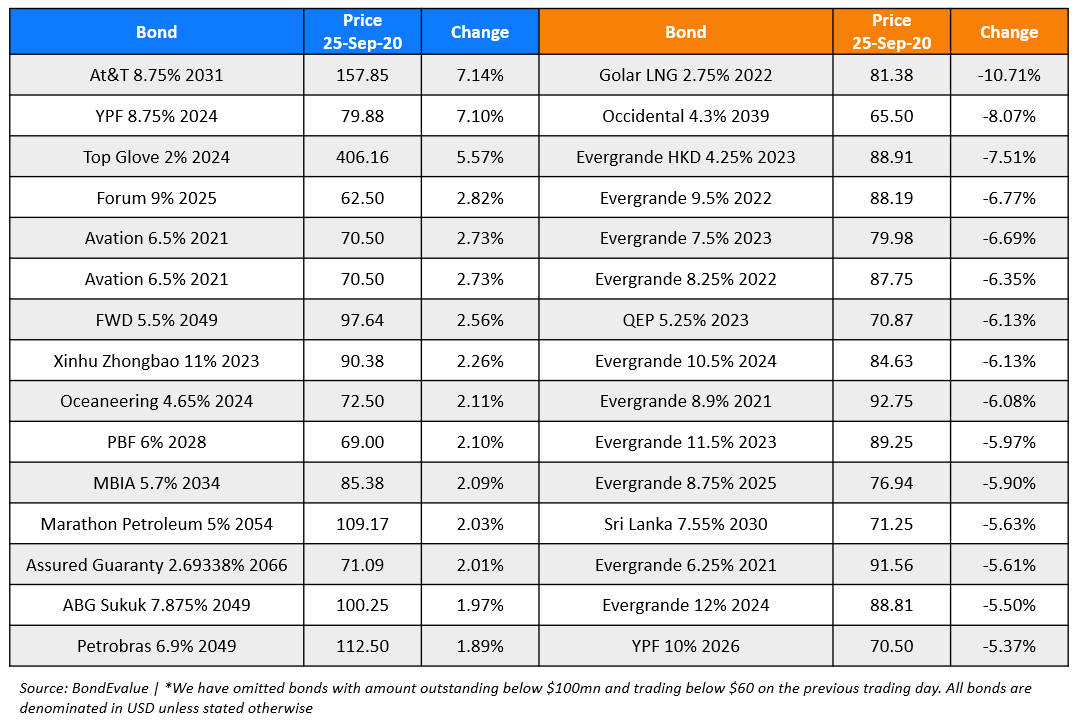