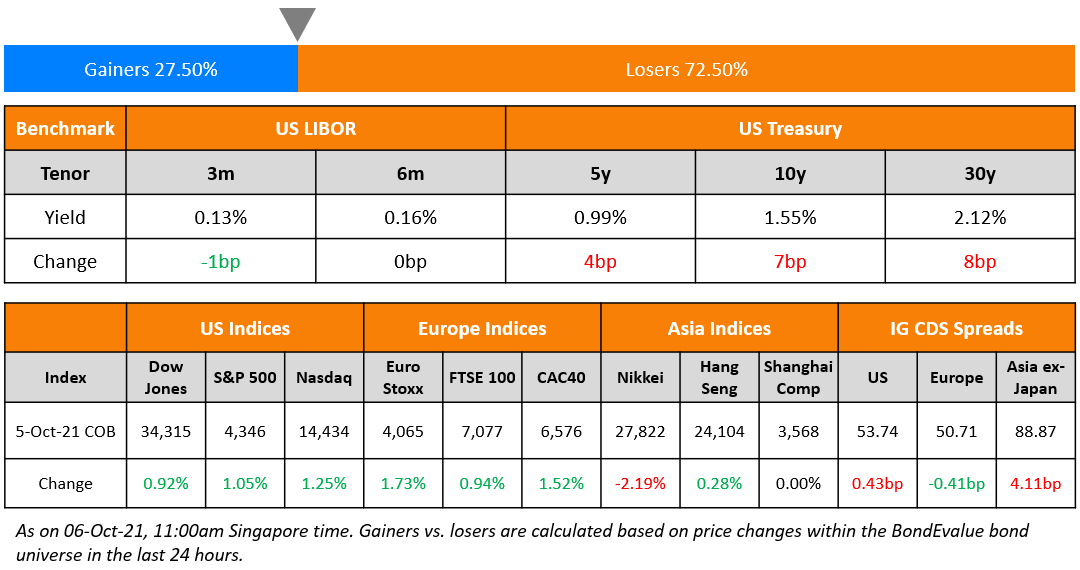 Wall Street picked up yesterday after a sharp drop on Monday as S&P was up over 1% and and Nasdaq was up 1.3% respectively. US 10Y Treasury yields shot up by 7bp to 1.55%. Financials were up 1.8%, IT and Communication Services were up over 1.5%, while Real Estate was down 0.9%. European stocks also rallied with the DAX, CAC and FTSE jumping over 1%, 1.5% and 0.9%. Brazil’s Bovespa was almost unchanged. In the Middle East, UAE’s ADX was down 0.1% while Saudi TASI was up 0.8%. Asia Pacific markets are broadly lower again – HSI was down 1.1%, STI was flat and Nikkei was down 1%, while Shanghai remains closed. US IG CDS spreads were 0.4bp wider while HY CDX spreads widened 2.1bp. EU Main CDS spreads were 0.4bp tighter and Crossover CDS spreads tightened 1.4bp. Asia ex-Japan CDS spreads widened 0.1bp.
US ISM Non-Manufacturing PMI for September came at 61.9, better than expectations of 60 with the prices paid component rising to 77.5 from 75.4. EU Services PMI for September came marginally stronger than forecasts at 56.4 while it fell from the prior 59. 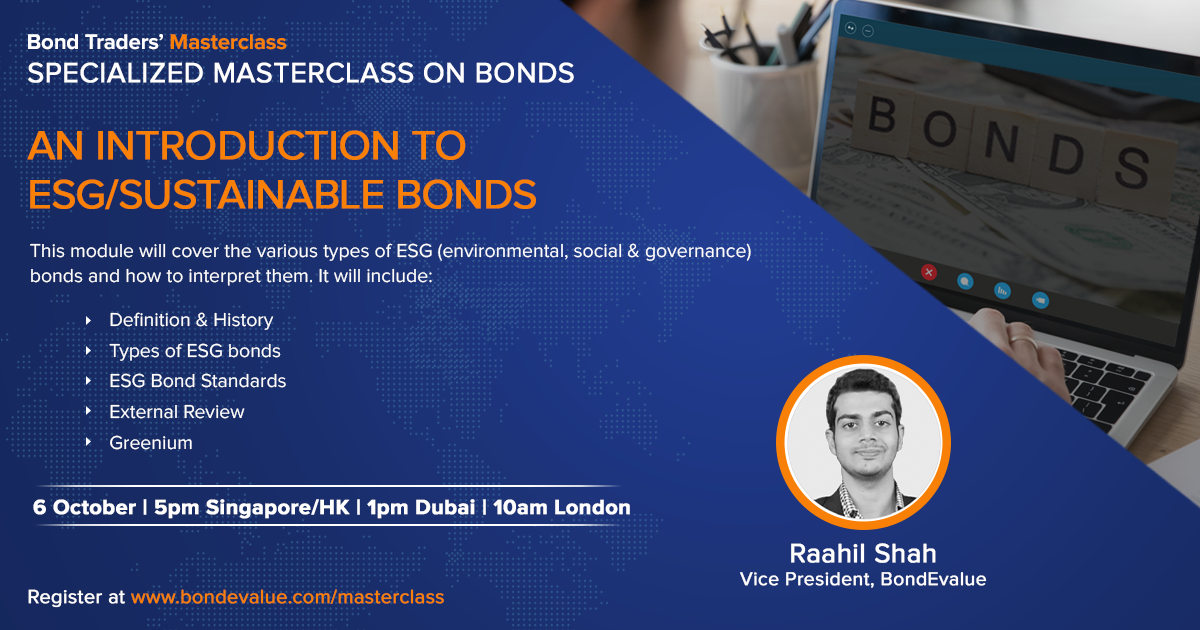 Frontier Communications raised $1bn via a 8.25NC3 second-lien bond at a yield of 6%, 25bp inside initial guidance of 6.25% area. The bonds have expected ratings of Caa2/CCC+/BB-. Proceeds will be used to fund capital investments and operating costs from building its fiber network and customer base, and for general corporate purposes. This is Frontier’s first issuance since emerging from bankruptcy earlier in April this year.

MUFG raised $3bn via a three-tranche deal. It raised:

The bonds have expected ratings of A1/A–/A–. Proceeds will be used to fund the operations of MUFG Bank and Mitsubishi Trust and Banking Corp through loans that are intended to qualify as internal TLAC debt.

HDB raised S$900mn via a 7Y bond at a yield of 1.54%, in line with initial guidance. The bonds have expected ratings of AAA (Fitch). Proceeds will be used to support HDB’s development programmes and to fund working capital as well as refinance debt.  The new bonds are priced 4bp tighter to its existing 1.37% 2028s that yield 1.58%, due mainly to rising benchmark rates.

A Formosa bond is a bond which is issued in Taiwan by a foreign bank or corporation but is not denominated in the New Taiwanese Dollar. It is a way for multinationals to raise capital in Taiwan. To qualify as Formosa, borrowers must have credit ratings of BBB or higher. Formosa bonds are listed and traded on the Taipei Exchange. UAE has launched its debut Formosa.

“We face a global recovery that remains ‘hobbled’ by the pandemic and its impact. We are unable to walk forward properly – it is like walking with stones in our shoes,” she said.

On the view that bond yields are disconnected from economic fundamentals

According to a report by J.P. Morgan Asset Management’s Strategic Investment Advisory Group

“Central banks have backed themselves into a corner from which they will be unable to retreat.” “The bond vigilantes are now outgunned by the bond pacifists.”

Traditional strategies to protect against inflation are “less likely to work well today because they are offering low or negative real yields.” “We think the consumer balance sheet right now is quite healthy,” Gross said. “So securitized credit is a very interesting opportunity.” “You might be receiving a nice, attractive dividend from a company with a highly developed stock, but the price changes can wipe out the gains from dividends very quickly,” Gross said. Core real assets such as real estate, infrastructure, natural resources, and transportation “have relatively low correlations to traditional stocks and bonds, and that is what really makes them compelling,” Gross said. “Most investors do have room to take on additional illiquidity,” Gross said. “In a market environment such as this one, where public liquid markets simply are unlikely to deliver returns that investors need, you have to do something.”

On investment firms raising concerns about the outlook for Chinese stocks

“We are not putting money into China right now.”

“If you are investing in markets, it’s impossible to have no view about China.” “What China is doing is quite explicit, but it’s not that different than what we see in a lot of the Western markets,” he said.

“It will continue to grow faster than the developed markets.” “They’ve got a very entrepreneurial culture, they’ve got a government that wants economic growth to improve quality of lives, and I think that means, broadly speaking, that China should do well.”

“The effect of these various interventions, especially the timing of announcements around the Didi listing in the U.S., has been to discourage many U.S.-based or international investors,” Marshall said. “You could argue that U.S.-listed Chinese American depositary receipts are now uninvestable.”

In a report by Matt Jamieson and Buddhika Prasad Piyasena, Fitch analysts

According to Fitch Ratings

“We expect negative actions on the portfolio of 50 issuers to continue in the fourth quarter, with the Chinese real estate sector facing a number of headwinds. 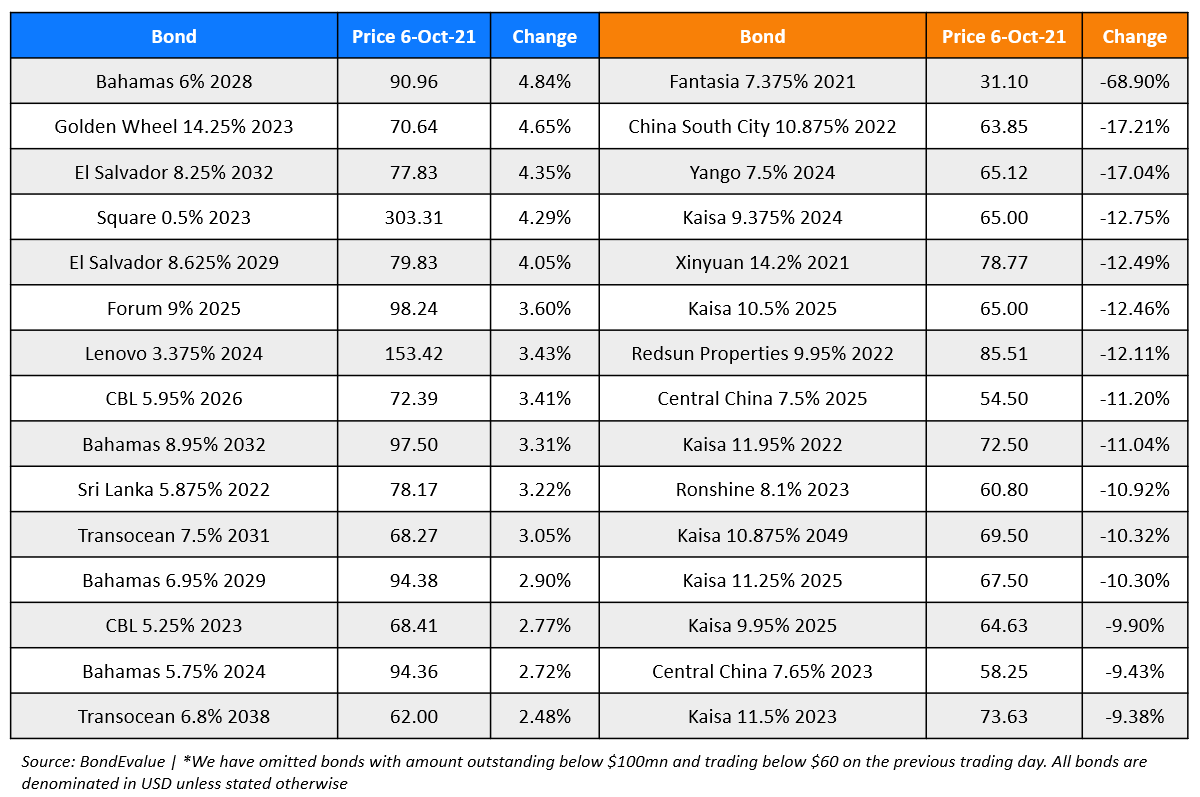