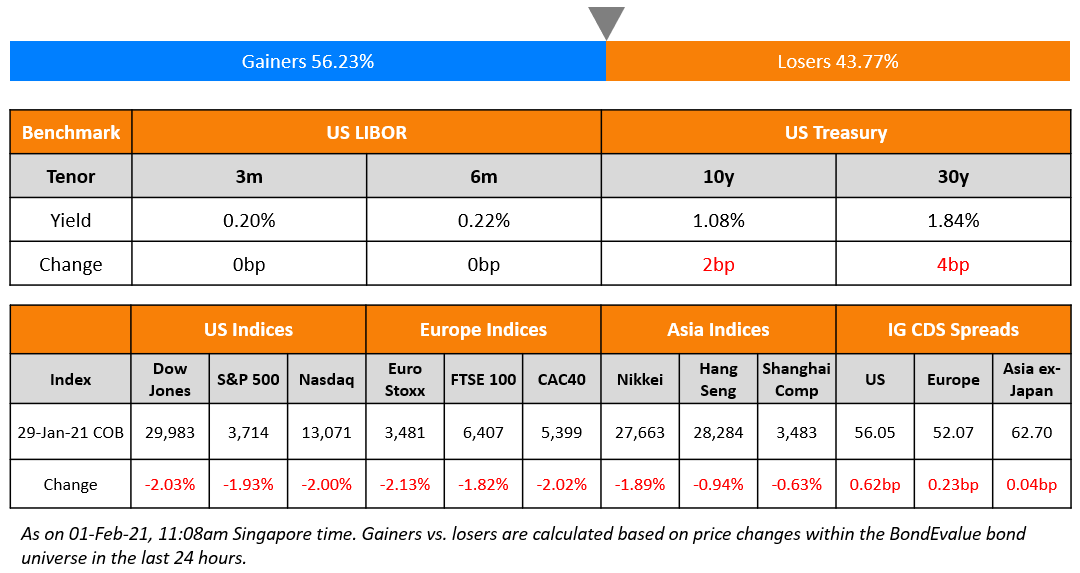 US equities witnessed another sharp decline on Friday with the S&P down 1.9% and Nasdaq down 2%, the worst week since October. Apple fell 3.7% and Tesla was down over 5%. All sectors were in the red with energy falling the most, down 3.4%. Risk sentiment deteriorated with US 10Y Treasury yields reversing a chunk of its 5bp move higher, to end up 2bp. Over the weekend, 10 Republican senators offered a $600mn stimulus plan as an alternative to Biden’s $1.9tn plan. A top White House economic adviser signaled willingness to discuss the idea but said that Biden was not willing to compromise on the need for a comprehensive bill. FTSE, DAX and CAC also fell 1.8%, 1.7 and 2% respectively. US IG CDS spreads were 0.6bp wider and HY was 1.6bp wider. EU main CDS spreads widened 0.2bp and crossover spreads widened 1.7bp. Asia ex-Japan CDS spreads are largely flat while Asian equities are ~0.4% higher today.

Sign up for the upcoming sessions on Understanding New Bond Issues & Credit Ratings tomorrow, February 2 and Using Excel to Understand Bond Calculations on Wednesday, February 3. This session is part of the Bond Traders’ Masterclass across four sessions specially curated for private bond investors and wealth managers to develop a strong fundamental understanding of bonds. The sessions will be conducted by debt capital market bankers with over 40 years of collective experience at premier global banks. Click on the image below to register. 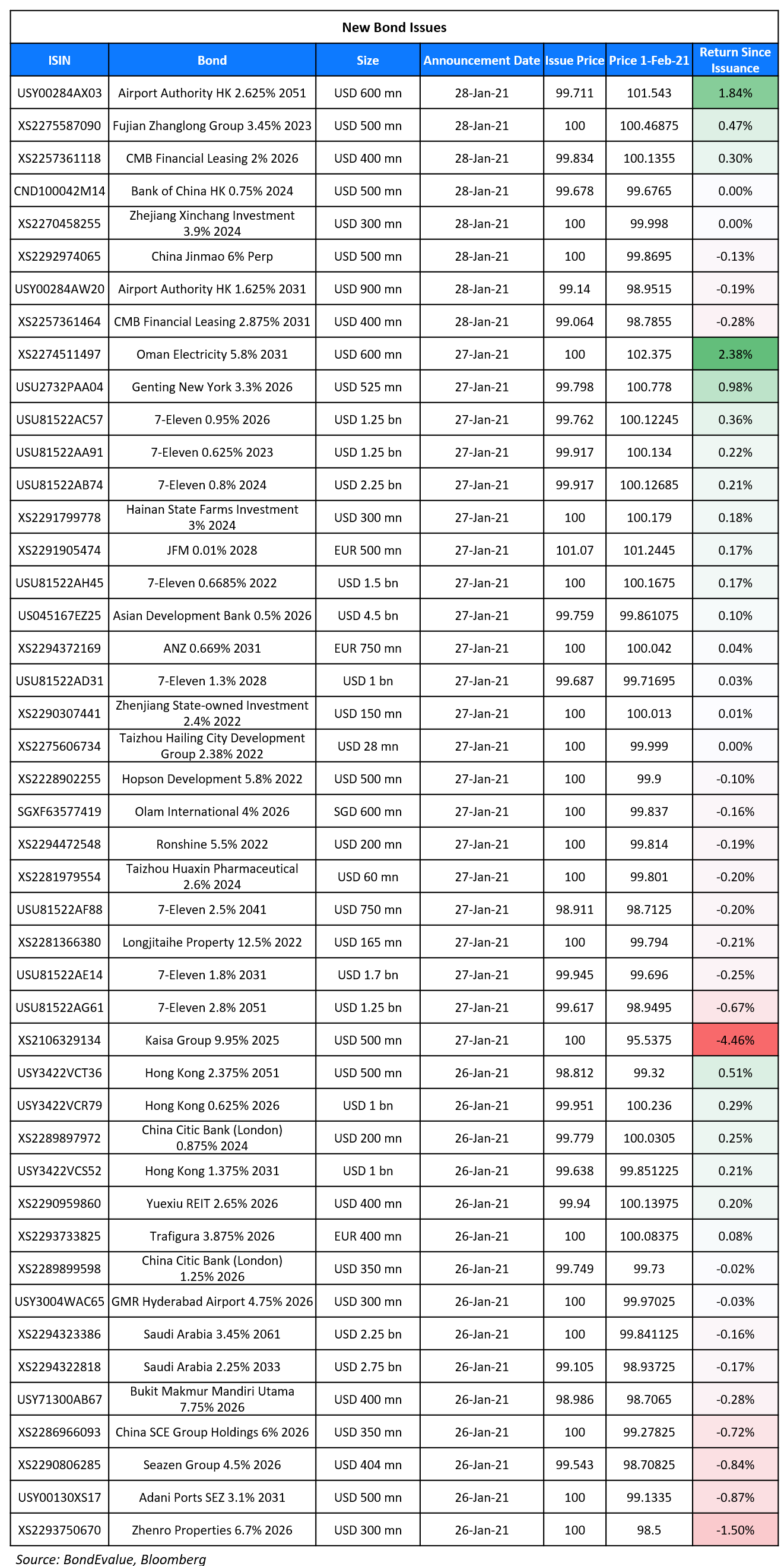 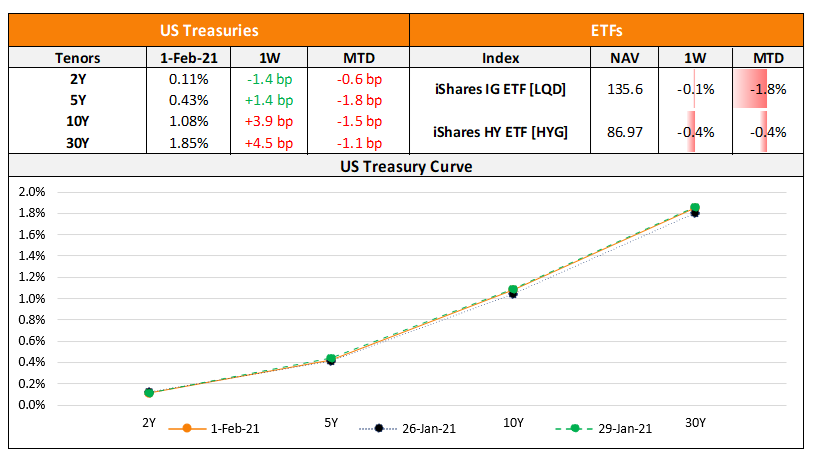 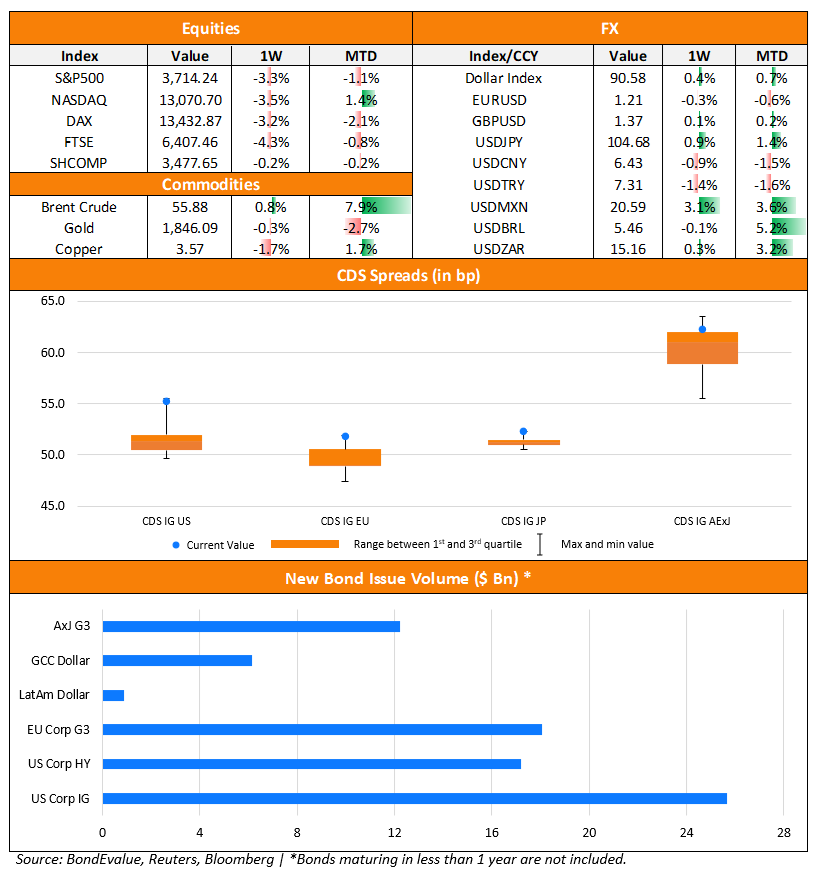 Dollar bonds’ performance in January 2021 was mixed with a negative bias. 38% of dollar bonds in our universe delivered a positive price return ex-coupon with the balance 62% in the red. Investor appetite for riskier debt was apparent with junk rated bonds outperforming investment grade rated bonds during the month. One prominent outlier in the high yield space was China Fortune Land (CFLD), which saw its dollar bonds plummet 45% to 60% through January on growing concerns about its liquidity position and ability to meet upcoming maturities. In the latest update on the Chinese developer, a creditor committee has been set up led by its two largest creditors, Ping An and ICBC. Bloomberg reported that the committee is scheduled to meet today to “to properly deal with the company’s liquidity risk and to protect the rights of financial creditors, with strong support from financial regulators and the local governments of Langfang city and Hebei province.” 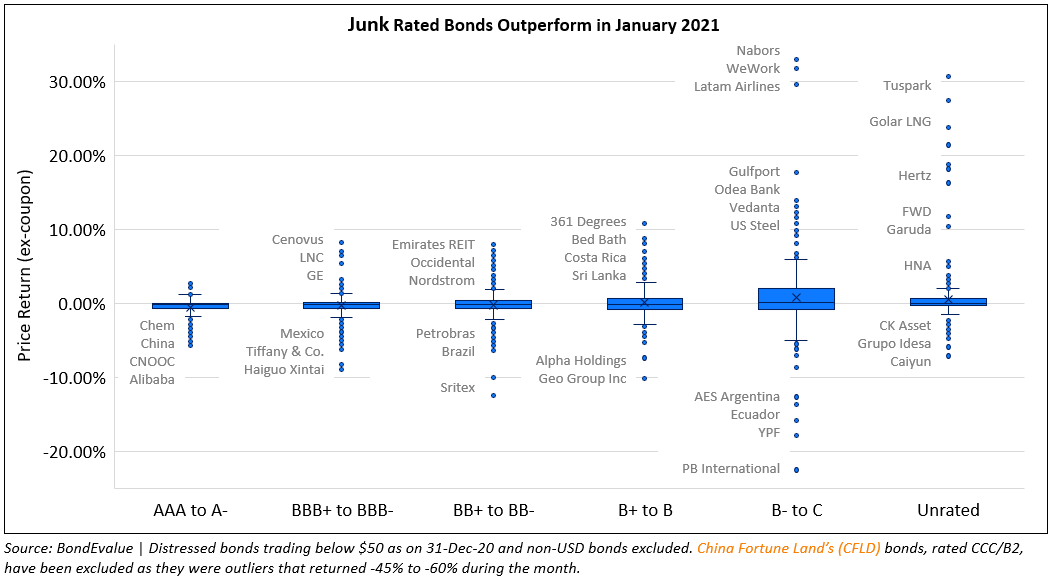 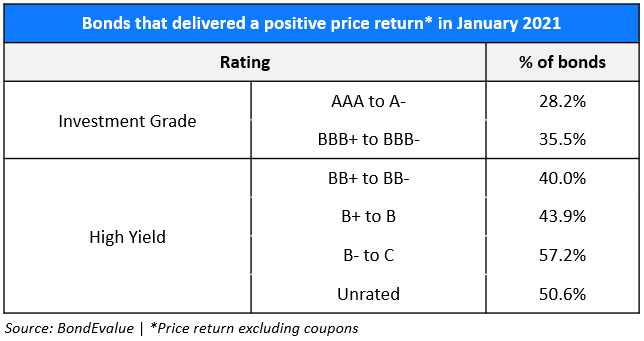 Pay-in-kind (PIK) Toggle notes are a type of PIK note where the issuer can choose to pay interest in cash or in kind and, during the term of the loan, can alternate back and forth between the two forms of interest payments within certain parameters. These are riskier for investors due to more credit risk with respect to the PIK interest amount, payment of which can be deferred until the loan matures. In a toggle note, the issuer has the option to defer an interest payment by agreeing to pay an increased coupon in the future. With toggle notes, all deferred payments must be settled by the bond’s maturity.

On the US Federal Reserve not anywhere close to a QE taper – Robert Kaplan, Dallas Fed president

Kaplan said he would want to see “evidence that we’ve weathered the pandemic,” including a decline in COVID-19 cases and hospitalizations. He would also want to see a decline in unemployment and progress toward reaching the Fed’s 2% inflation goal, he said. But once those benchmarks are met, the economy would be a lot healthier “if you can wean off some of these extraordinary measures,” he said.

On ECB’s worries that inflation is too low – Isabel Schnabel, European Central Bank executive board member

“It’s not easy to measure inflation right now because our basket of goods has changed significantly,” she said. “We have almost stopped consuming certain things altogether -– we’re no longer eating out, going to the hairdresser or traveling.” “We continue to be more worried about inflation being too low rather than too high,” she added. “I can of course not predict when interest rates might be raised — what I can tell you, though, is that raising interest rates in the current situation would have disastrous effects.”

On Treasury market set for a respite from record supply onslaught

Blake Gwinn, director of US rate strategy at NatWest Markets

“Treasury is pretty well funded now,” said Gwinn. “It’s a good time for them to take a break from the really aggressive campaign ofcoupon debt increases that we’ve had for almost the last year. And there’s also a large degree of uncertainty regarding how much of Biden’s package actually gets done and when.”

“Treasury will keep everything steady this meeting, using it as an opportunity to take stock of things,” said Misra. “They came into the yearover-funded and need to bring the cash balance down anyway. Treasury also wants to keep their flexibility as there could be $1 trillion more in stimulus, or no more at all.”

“Monetary policy will remain as accommodative as possible for the foreseeable future,” said Maroutsos. “Growth will bounce as we move out of Covid, but overall it will be subdued and that will likely put a cap on yields.”

“The negative rates ship may have sailed,” they wrote.

“The central bank is expected to conclude that while further rate cuts are technically feasible,this does not make them more likely to happen,” said Hollingsworth. “With good progress on the vaccine rollout since the Monetary Policy Committee’s last meeting setting the stage for a rebound in demand later this year, markets are right to reduce the implied probability of a near-term rate cut.”

“This does not seem like the right time to risk yields moving even a little higher,” wrote Searle, adding that there was no pressure to slow the pace. “Stepping back, the bigger picture for 2021 hasn’t changed: supply and quantitative easing are broadly in balance and certainly supportive of stable yields/curves,” he added.

“I believe that we have to reinforce the way in which the auctions are carried out by the Bank of Mexico,” Yorio said. “We are going to review it together with them.”

“Hyperactive fund churn is a feature of the onshore investment industry,” he said. Mr Alexander said that level of interest was “not an isolated event” as a further 15 funds had also sold out in a single day in January.

Freya Beamish, chief Asia economist at Pantheon Macroeconomics
“The PBoC clearly is worried about bubbles, given Ma Jun is speaking openly about it. The rally in Chinese stocks has been alarming and [the equity market] looks exposed if the vaccine rollout doesn’t go smoothly,” said Beamish.

“SABIC’s collaboration with Saudi Aramco represents an excellent opportunity for both companies to align and harness their synergies — for their mutual benefit and for the benefit of respective customers, stakeholders and shareholders,” Al-Benyan said in a press release. “The fourth quarter benefited from sustained economic recovery,” Al-Benyan said. 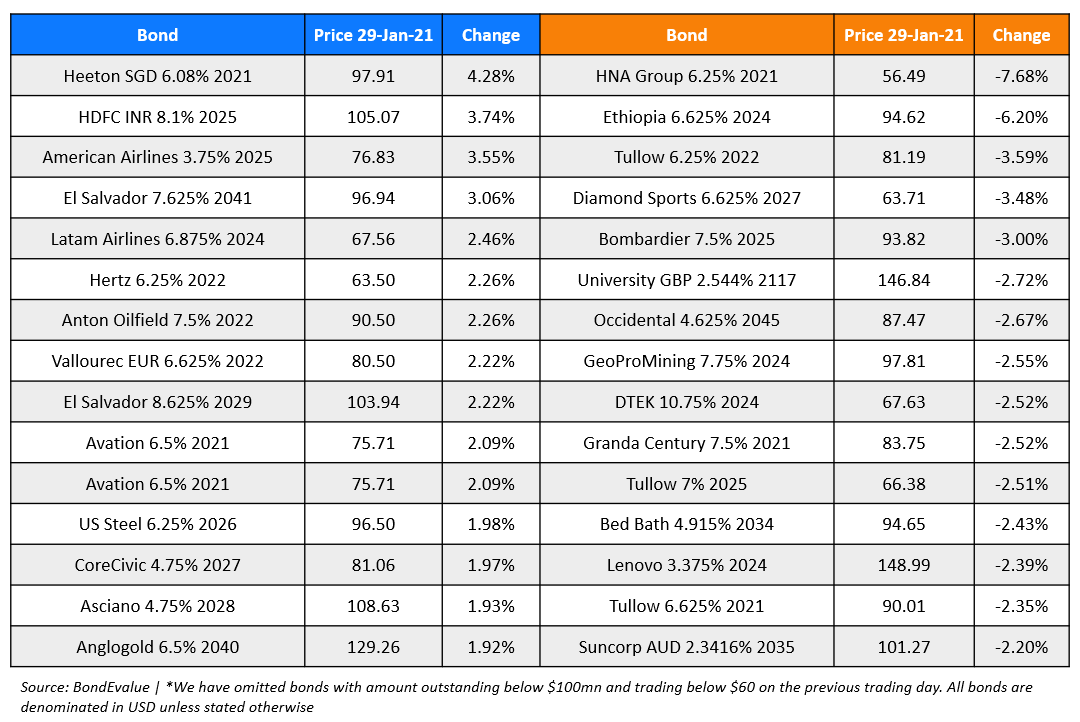