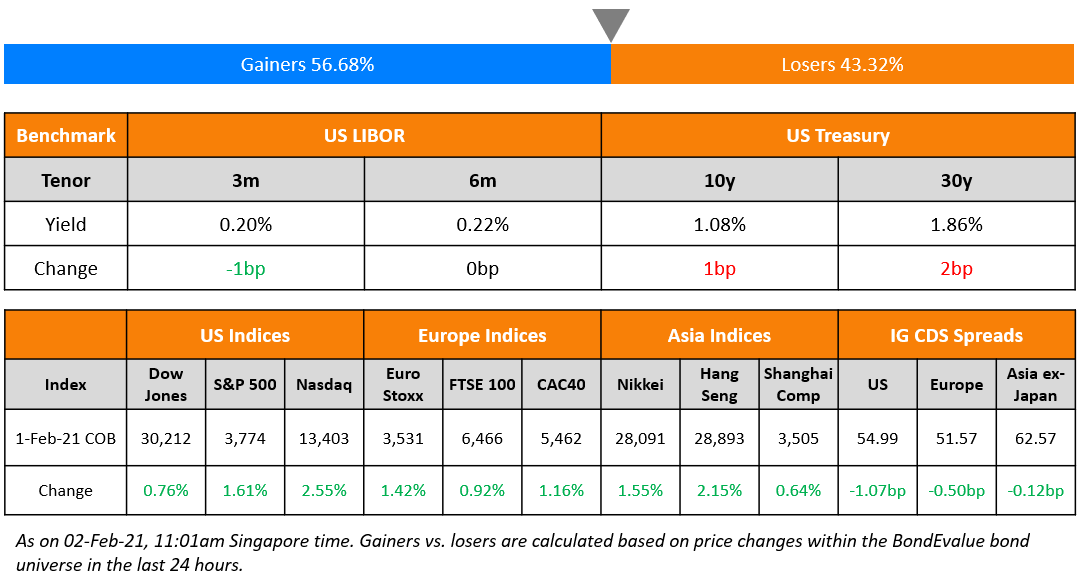 S&P was 1.6% higher while Nasdaq rallied 2.6% as tech stocks outperformed. Amazon and Microsoft were among the large-cap gainers, up 4.3% and 3.3% besides Tesla moving higher by 5.8%. Mining stocks were also in demand after the Gamestop saga with the focus now on silver, which soared to eight-year highs. US 10Y Treasury yields inched up 1bp. A possible smaller fiscal package, ISM manufacturing index printing at 58.7 for January vs. 60.5 in the month before and the US Treasury reducing Q1 borrowing due to higher cash balance made the headlines in the US. There is speculation that former ECB president Draghi could become the next Italian prime minister. FTSE, DAX and CAC also rose 0.9%, 1.4% and 1.2% respectively. US IG CDS spreads were 1.1bp tighter and HY was 7.1bp tighter. EU main CDS spreads tightened 0.5bp and crossover spreads tightened 1bp. Asia ex-Japan CDS spreads are 0.1bp tighter while Asian equities are ~1.2% higher today.

Sign up for the upcoming sessions on Understanding New Bond Issues & Credit Ratings today, February 2 and Using Excel to Understand Bond Calculations tomorrow, February 3. This session is part of the Bond Traders’ Masterclass across four sessions specially curated for private bond investors and wealth managers to develop a strong fundamental understanding of bonds. The sessions will be conducted by debt capital market bankers with over 40 years of collective experience at premier global banks. Click on the image below to register. 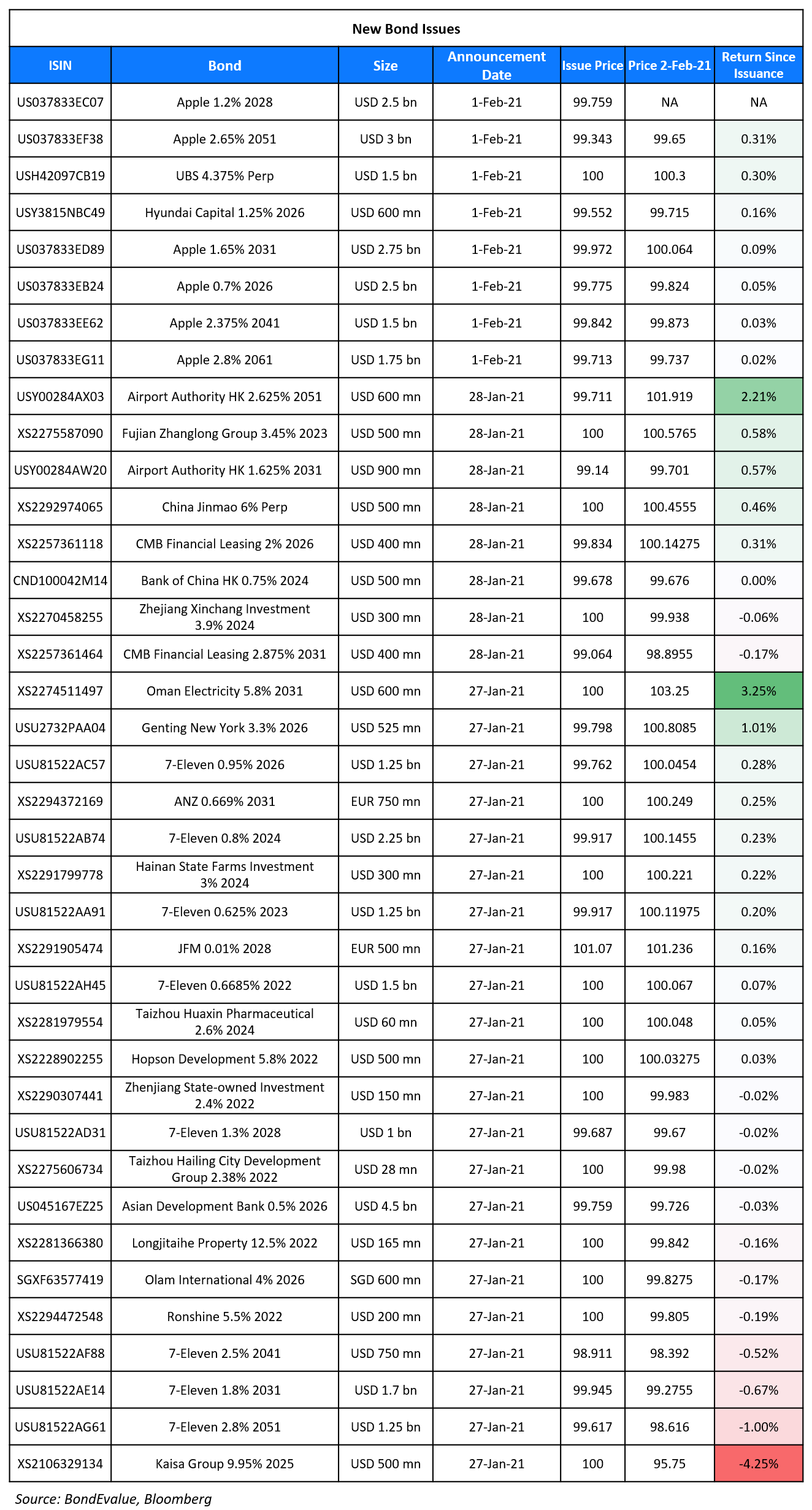 Hyundai Capital raised $600mn via a 5Y green bond at a yield of 1.343%, or T+92.5bp, 37.5bp inside initial guidance of T+130bp area. The bonds have expected ratings of Baa1/BBB+ and received orders over $4.75bn, 7.9x issue size. Asia took 54%, EMEA 14% and the US 32%. Fund managers and asset managers bought 66%, insurers, pension funds and sovereigns, supranationals and agencies 20%, bank treasuries 10% and private banks, corporates and others 4%. Proceeds will be used for eligible projects in accordance with the issuer’s sustainable financing framework.

Mongolian Mortgage Corp (MMC) raised $250mn via a 3Y bond at a yield of 9.125%. The bonds have expected ratings of B3/B. The bonds have a guarantee from parent company MIK Holding as well as a letter of support from the Mongolian central bank. The letter of support is not a guarantee, but states, among other things, that the BoM will maintain its seat on the board of MIK Holding. The issuer had marketed a three-year bond on January 21 at final guidance of 9.125%, but postponed the deal when Prime Minister Khurelsukh Ukhnaa resigned that day following protests about the government’s handling of the Covid-19 pandemic. MMC had launched a tender offer for its $280.68mn 9.75% 2022s guaranteed by MIK Holding, which is dependent on the new deal going ahead. The tender offer will be at $1,020 per $1,000 in principal before the deadline of February 16.

Uridashi bonds are non-JPY denominated bonds sold directly to Japanese individual investors. Institutions like the World Bank, ADB etc. have issued such bonds. These are typically issued in a currency with a higher yield vs. the Japanese Yen. These are different from Samurai bonds that are yen-denominated bonds issued by foreign entities in Japan.

On no need for monetary policy response to trading frenzy in GameStop Corp. and other hot stocks

“I’m not at all thinking about modifying my views on monetary policy because of speculators in these individual stocks.” “The key now is for the Federal Reserve to keep our foot on the monetary policy gas until we really have achieved maximum employment,” Kashkari said

She didn’t favor tightening up monetary policy, which would potentially slow the economic recovery, “simply to ensure that some people who already have stock market wealth don’t get more.”

“Non-bank financials I’m watching very carefully — potential instability funding risks that might occur,” Kaplan said. “And I’m conscious of the fact that we’ve had to make these extraordinary moves that we’ve had at the Fed with interest rates and bond buying.”

On the need for aggressive fiscal and Fed action in order to return to normalcy – Robert Kaplan, Dallas Fed President

“We are still in the teeth of this pandemic – and we are not out of the woods yet,” Kaplan said. “We need to be aggressive in our fiscal and monetary policy actions, and I am hopeful that by doing that we will ultimately get beyond this pandemic and can then get to a more normalized environment in the months and years ahead.”

“We have now entered wait-and-see mode until we get clarity as to what the new administration will do,” said Lukaszewski. “China’s debt market is one of the world’s largest. Chinese credit spreads are attractive compared to U.S. credit spreads and investors benefit from diversification when they allocate across more markets and geographies,” Lukaszewski said, adding U.S. investors were in a “difficult position.”

“The Global investment community wants more access to Chinese assets,” said Schwartz. “The bigger picture stepping back is that there is a lot of global interest in adding China currency reserves and Chinese bonds to portfolios.”

“You’ve got investors that are awash with cash, investors that have no reason to delay as there are no expectations for significant interest rises and finally the back-up of the central banks,” said Blandin. “That was a pretty good recipe for highly successful transactions and that’s why we’ve seen massive order books for most of the very large transactions.”

“There was a consensus that we should wait for a series of inflation and activity data before normalizing rates,” Campos Neto said

“Our balance of fiscal risks is worse than our peers,” said Pessoa who forecasts a half-point hike in March. “This has weighed on our currency and has contributed to rising inflation.”

“Given the way inflation numbers have moved and the guidance from the central bank, we brought those forward,” he said. “We are looking for average inflation this year of around 4%.” 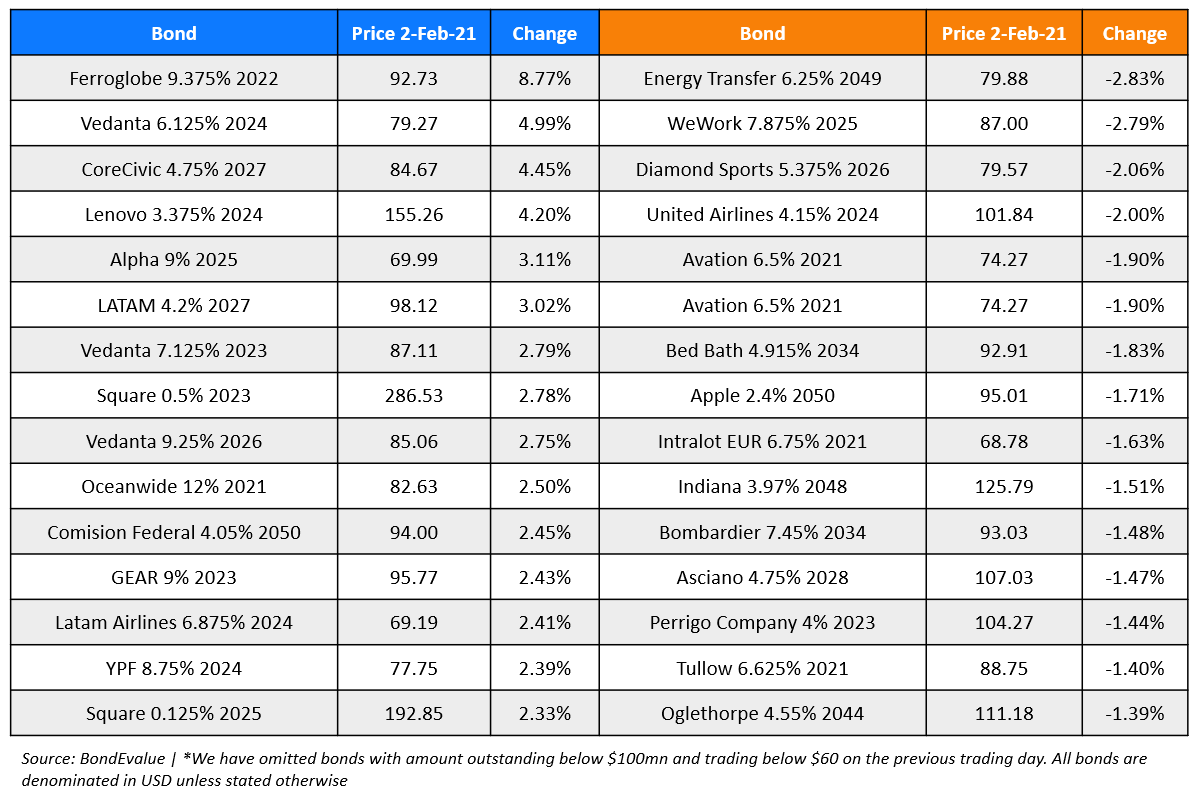