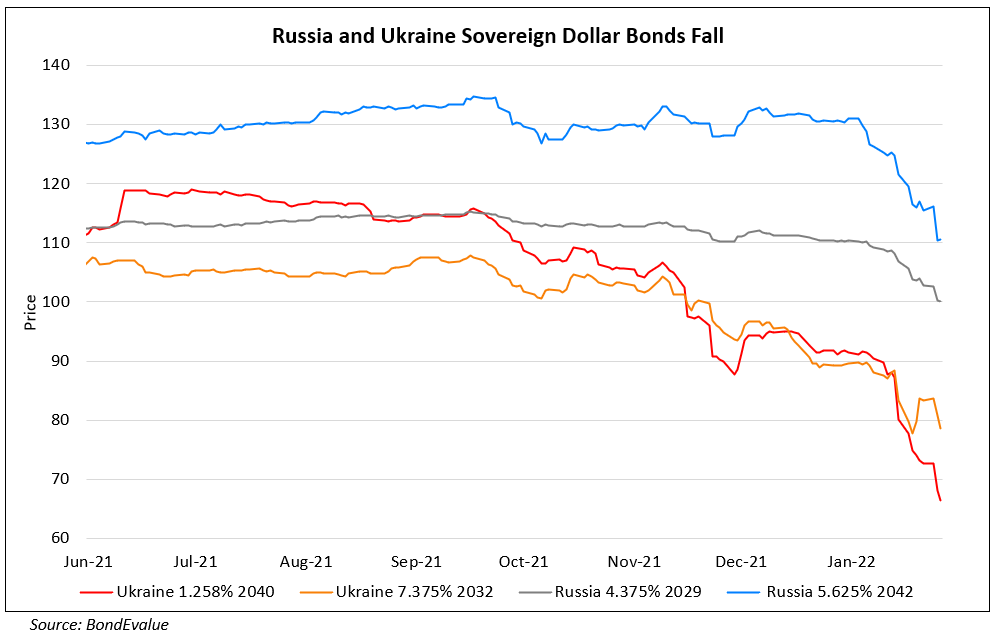 Geopolitical tensions escalated as Russia ramped up military drills across the Pacific to its western flank around Ukraine. The announcement of drills comes after the US and NATO deployed troops in the region to dissuade Russia from a possible invasion. The new drills demonstrated the might of Russian forces and involved tanks, drones, troops from its regular infantry as well as elite paratroopers. The Russian defense ministry added that three of its ships were participating in joint drills far from the region with the Chinese fleet in the Arabian Sea. Dmitri S. Peskov, the spokesperson for President Putin said, “I would like to note that this is happening not because of what Russia is doing. It is happening because of what NATO and the U.S. do, because of the information that they spread.”
Ukraine’s dollar bonds slipped on Tuesday with its 7.375% 2032s down 4.8 points this week to 78.52 cents on the dollar, yielding 10.99%. Russia’s dollar bonds were not spared either with its 7.5% 2030s down ~2 points this week to 107.884, yielding 4.04%. Ukraine and Russia’s CDS spreads have also widened with the 5Y CDS up 311bp and 124bp to 930bp and 248bp respectively.
For the full story, click here