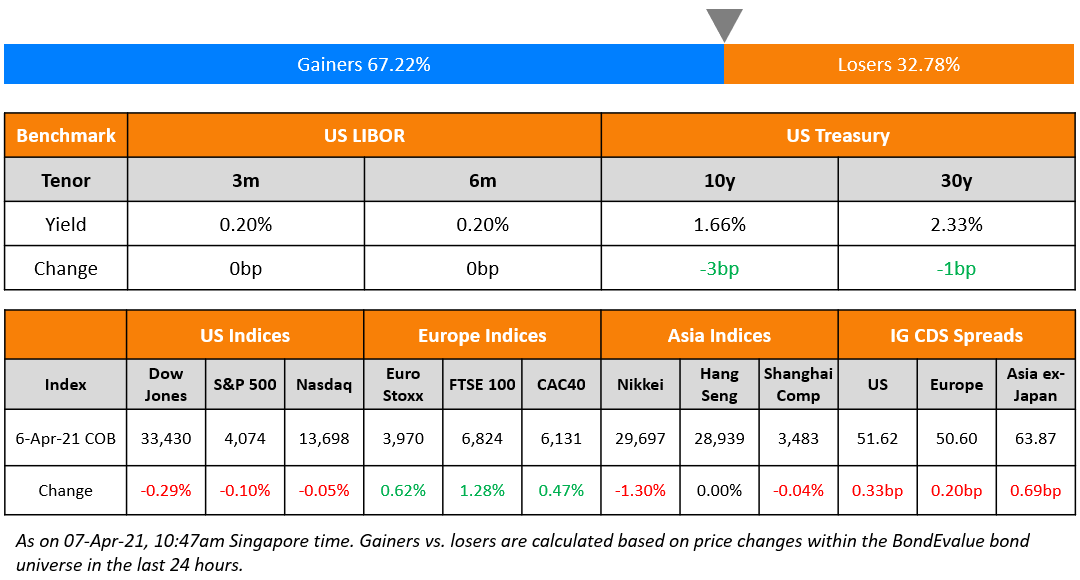 Both S&P and Nasdaq ended modestly lower by ~0.1%. US 10Y Treasury yields slipped 3bp to 1.66%. The IMF raised its global growth forecast for 2021 from 5.5% to 6% citing an improved economic outlook. In Europe, the DAX and CAC rose 0.7% and 0.5% to new closing highs and FTSE rallied 1.3%. US IG CDS spreads were 0.3bp wider and HY was 1.4bp tighter. EU main CDS spreads were 0.2bp wider and crossover spreads widened 0.5bp. Asian equity markets are mixed with China and HK lower by 0.5% and others up 0.3% while Asia ex-Japan CDS spreads were 0.7bp wider. Asian primary markets are seeing three new deals this morning from Singtel, UOB and Redco.

Keen on learning how to do bond calculations on Excel from an ex-bond trader? Join us for the upcoming session on Using Excel to Understand Bond Calculations at 6pm SG/HK today, April 7.

Powerlong Real Estate raised $200mn via a 364-day note at a yield of 4%. The bonds were unrated and proceeds will be used for general corporate purposes and/or to refinance debt due within a year.

Redco Properties and UOB have come out with sustainability note offerings today.

Nouriel Roubini, professor at New York University’s Stern School of Business and former adviser to the US government
“We’re seeing widespread frothiness, bubbles, risk-taking and leverage,” Roubini said. “Lots of players have taken too much leverage and too much risk and some of them are going to blow up.” “Even if in the short-term growth outcomes in the U.S. strengthen the dollar, the direction of the dollar is south over time,” Roubini said.
Christian Mueller-Glissmann, strategist at Goldman Sachs Group Inc
“You’re dealing with peak growth momentum and we’re dealing with incredible pressure from a fund flow point of view as well, where you haven’t really seen major outflows out of bonds,” he said.
On US yields tumbling as early Fed hike views seen too ambitious
Don Ellenberger, senior portfolio manager at Federated Hermes
“I think the Fed will stick to what they said. The Fed tells us that they’re not going to raise rates and they’re going to let inflation overshoot,” said Ellenberger. “Longer term, we’re going to see rates continue to grind higher. I wouldn’t be surprised if we see 2.25%-2.50% in the 10-year by the end of the year just from a fundamental standpoint,” said Ellenberger.
According to TD Securities’s research note
“The bar for the Fed to hike rates remains high as the Fed needs to see an inflation overshoot and an inclusive labor market recovery.” “This would require substantial labor market improvement over a longer period in our view. In addition, given the need for the Fed to complete tapering before hiking rates, which can take the better part of a year, we think the market is overpriced for a risk of an early Fed hike,” TD added.
On IMF lifting emerging markets growth outlook but sees divergent recovery paths – Gita Gopinath, IMF chief economist
“The divergent recovery paths are likely to create significantly wider gaps in living standards between developing countries and others, compared to pre-pandemic expectations,” said Gopinath. “This has reversed gains in poverty reduction, with an additional 95 million people expected to have entered the ranks of the extreme poor in 2020, and 80 million more undernourished than before,” Gopinath added.
On distressed debt investors stymied by Fed’s easy money
Adam Cohen, Caspian’ Capital managing partner
“People aren’t investing, they’re just chasing,” said Cohen. “Money always burns a hole in your pocket,” Cohen said. “The best thing you can do now is not make a mistake. That can save you a lot more money than mediocre trades can make you.”
Howard Marks, Oaktree co-founder
“To get to higher returns these days, you have to be willing to extend credit to somebody who is not clearly coming back,” Marks said.
Jason Dillow, chief executive officer at Bardin Hill Investment Partners
“If you can only do public-market distress, you just have to hold your position, because if you sell it, there’s nothing else to buy,” said Dillow.
Chris Acito, chief investment officer of Gapstow Capital Partners
“If you had a fundamentally strong business, you could’ve found the liquidity to make it through the challenges of 2020,” Acito said. “Many of the businesses which are still in distress have flawed business models that will be difficult to revive.”
On Italian and French banks reviving ‘doom loop’ fears with bond buying
Heike Mai, banks analyst at Deutsche Bank
“Sovereign risk on bank balance sheets has still not been tackled, in contrast to other risk mitigation measures introduced by the [eurozone] banking union,” said Mai. “It remains the elephant in the room. The current pandemic with its surge in public debt highlights the need for reform.”
Nicolas Véron, a senior fellow at the Bruegel think-tank
“The increase in liabilities going between banks and governments is worrying to me and policymakers should look to address it,” said Véron. “But the risk seems a bit beyond the horizon that keeps policymakers awake nowadays.”
Jacques de Larosière, former head of the IMF and Banque de France
“Banks have to respond to the issuance of bonds by the state because they feel it is a good investment to hold in terms of risk and they are encouraged to do so to maintain liquidity,” he said.
Lorenzo Bini Smaghi, chair of French bank Société Générale
“Banks may want to invest mainly in safe assets to protect capital levels in view of the message coming from regulators,” he said. 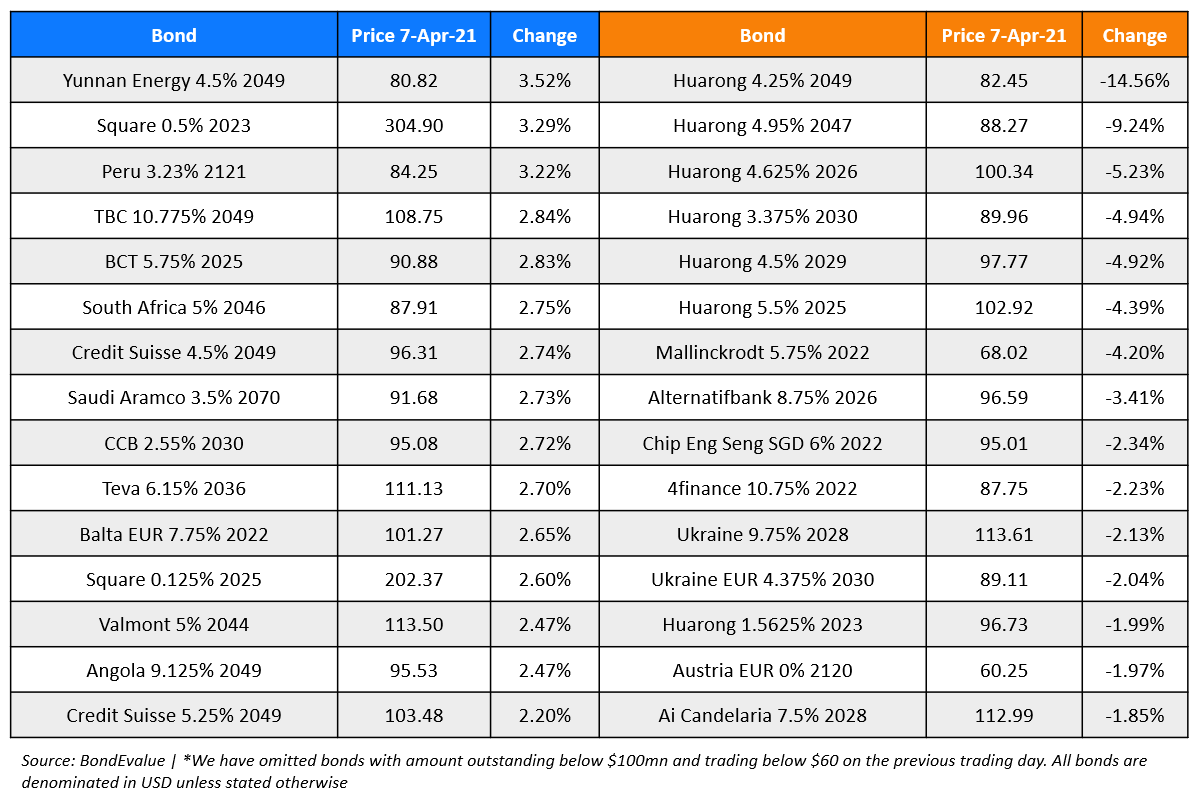