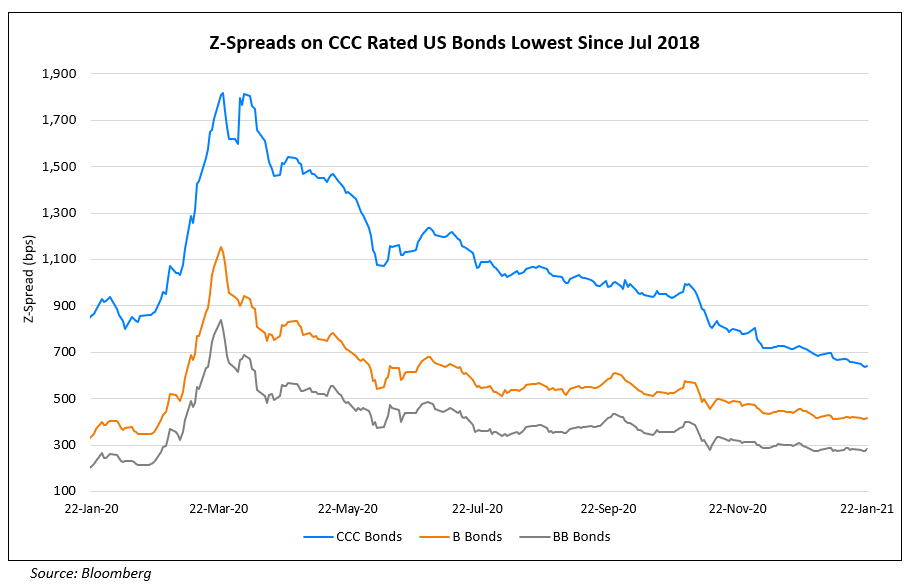 New bond issues in the new year have started on a high with US junk bond issuances set for a record January. US junk rated issues have totaled $40bn so far while IG has hit over $110bn. Yields on CCC bonds, considered to be of substantial credit risk with default a real possibility according to Fitch, hit an all-time low of 6.4% as the hunt for yield continues with historically low interest rates globally. With oil moving higher, energy companies such as NGL Partners are expected to tap markets this week. With major US banks raising ~$17bn last week, JPMC analysts led by Eric Bernstein said, “We continue to expect that banks could take advantage of tight spreads, and issue a high portion of their FY funding plans following first quarter earnings”. While yields on CCCs are at all-time lows, Z-spreads are at 2.5 year lows.

In the chart below, we have plotted z-spreads of US bonds across the BB, B and CCC rating over the past year. The reason we have used z-spread and not yield is because z-spreads help draw out the credit, liquidity and optionality risk components in bonds.

Given the all-time low in yields, with the above data, we can infer that much of the impact is due to nominal benchmark yield drop post the monetary stimulus after the pandemic.