US Treasuries Sell-Off even as Stocks continue to fall; Airline Sector First To Be Hit By Coronavirus 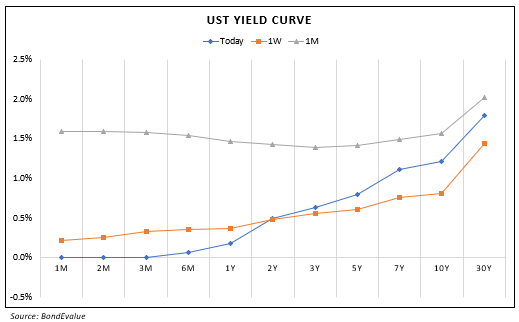 Old and wise traders have always whelped young traders with a final mantra, when everything is falling, only one thing goes up, US treasuries. That did not happen yesterday…

US Treasuries Sell-Off even as Stocks continue to fall

Markets saw a rare day yesterday when almost everything from global stocks, oil prices, gold and government bonds saw a fall in prices. 10Y UST yields are higher by 12 bps on the day even as US stocks plunged with the Dow hitting pre-Trump levels to end the day below 20,000 points. Normally during times of risk-off such as this, US Treasuries prices rally as they provide a safe haven of risk-free assets to buy. Despite this, long end treasuries sold off.

One possible cause is the discussion of a $1 trillion federal stimulus package between Treasury Secretary Steve Mnuchin and lawmakers. This could have led to traders selling long-term bonds in anticipation of a deluge of future debt supply. Another cause could be that investors are biased to hold cash instead of treasuries that have already rallied significantly in the past one month. Cash might also be required to cover margin calls and this could lead to closing out of positions in assets such as UST and Gold as they have outperformed other asset classes.

Another interesting this to note is the high-grade corporate bonds which have been pretty resilient recently have started selling off as well in the past few days. In the last two days, Apple’s 2.2% 2029 bond has gone from 101.9 to 97.0 levels and Temasek’s 3.625 2028 bond price has gone from 115.0 to 111.85 levels. The chart below shows how the UST yield curve has steepened from one month ago to today.

Asian markets are watchful this morning after central banks and governments around the world announced measures aimed at boosting confidence which triggered a pause in selling. Overnight the European Central Bank announced an asset purchase program and the Reserve Bank of Australia is shortly expected to make a rate cut at an emergency meeting today, followed by a quantitative easing (QE) program. DBS analysts said “the cash rate target is expected to be lowered by another 25bps to a record low of 0.25% followed by details of a QE program to buy Australian government bonds.”

Earlier the ECB said it will buy 750 billion euros of private and public sector securities. “Purchases will be conducted until the end of 2020 and will include all the asset categories eligible under the existing asset purchase program,” the central bank said.

The virus has so far claimed 8,800 lives and infected nearly 218,000 people globally and it is now widely accepted that the measures to contain the pandemic will result in a global recession.

Analysts are scrambling to downgrade their economic forecasts as the severity of the impact and the momentum of the spread has taken financial markets by surprise.

The shocking economic data released by China earlier this week, in particular, has triggered the recaiberations. “We now have early evidence of the negative economic impact on China and it has been far in excess of our initial projections. This, among other factors, including more widespread and draconian containment measures to deal with the spread, the emergence of strain in credit markets, and sharp tightening of financial conditions have caused us to revise down substantially our global growth forecasts in the first half of the year,” said Deutsche Bank economists in a note this morning. Deutsche Bank now expects a “severe but still relatively brief recession during the first half of 2020”. The bank has revised its world GDP forecast to -12.6% from -2.4% in first quarter of the year before recovering to 3.5% in Q2.

JPMorgan analysts have a more severe view calling the impact a “huge shock” with two consecutive quarters of contractions and a full year contraction of -1.1%. They said China’s Q2 rebound will be a laboratory for the second half of this year. “To effectively “bridge the gap” to a 2H20 recovery, policies need to help support aggregate demand for the most vulnerable,” they said in a note.” At the same time, monetary policy has done what it can in the form of traditional aggregate demand support in cutting rates; asset purchases in size are the likely next step for a number of central banks—some of which is already underway.”

The Airline sector was the first “domino” to catch the flu, with countries and now continents going into lock-down, their top line has been severely impacted. With people being encouraged to practice social distancing it is unimaginable that 555 people will be happily agreeable to be herded into the economy class of a A380 anytime in the near future. Airlines on their end have been good sports and allowed people to cancel, book, re-book flights without too much fuss and hence avoided any public backlash. They are now being rewarded with a host of bail-out packages, refunds, etc by their respective governments. This is obviously good for the airlines but also of the governments who have been under criticism for their lack of fiscal support to help those in most need.

For example, US airlines have asked for $50 billion in loans and grants, but also tens of billions in tax relief from the president; Beleaguered Boeing has also asked for $60 billion for the aerospace manufacturing industry. While on the government front, Australia has agreed to refund fees of A$715 millions for its airlines, and Taiwan has said its airlines could ask for backdated loans from Jan 15 onwards. Sweden and Denmark have come together to given US$300 million to SAS.

The bonds of the airlines sector have reacted sharply, see table below. 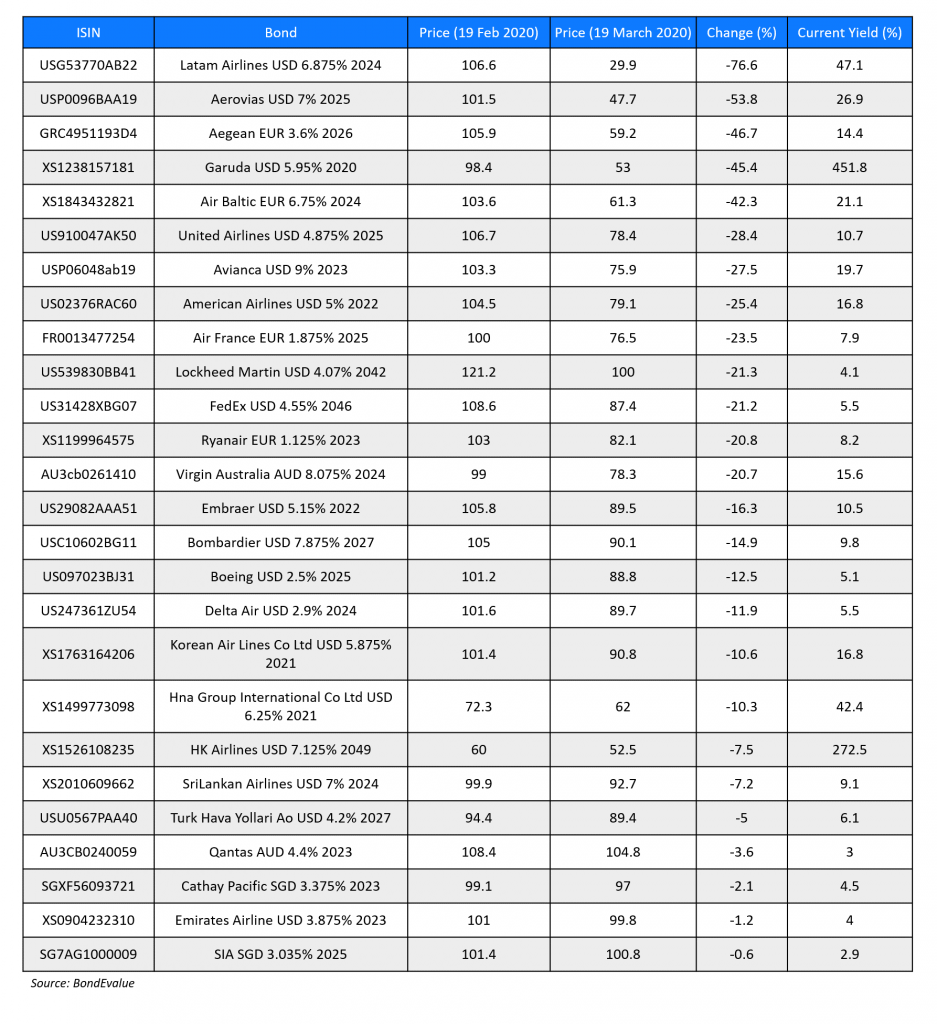 India’s YES Bank to resume normal operations on Wednesday. This is coming two weeks after it was taken over by the central bank and an infusion of Rs 100 bn ($ 1.4 bn) in fresh capital by a consortium of eight public and private sector banks led by State Bank of India. The RBI is betting the involvement of some of India’s best known banks including HDFC and Kotak Mahindra will help bolster public confidence in YES Bank. These banks will be required to hold their new shares for three years before they can sell. YES Bank’s 3.75% 2023 bond is currently yielding 9.20%.

US companies raised $25 bln on Tuesday

ExxonMobil, PepsiCo and Verizon were three of nine companies that raced to issue debt on Tuesday as the bond market thawed. Exxon raised the biggest chunk of $8.5 bln with $2 bln in 10Y debt priced 240 bps over similar maturity US treasury or 3.48%. The European debt market also emerged on Tuesday but with much less enthusiasm and only three issues. “Issuers in the US are taking the plunge, and saying ‘better the devil you know'” said Adam Bothamley, global co-head of debt capital markets at HSBC in London. “But, as we’ve seen in previous cycles, we’re in a market where the US is willing to put a price on risk earlier than other global investors”. Asian market is yet to see any new issues since 11 March.

On Thursday, Moody’s has decided to cut Occidental to junk from Baa3 to Ba1, as shale producer fails to keep up with the high debt load from the $37 billion borrowing last year for the acquisition of Anadarko Petroleum Corp in the midst of collapsing oil prices. On the other hand, Fitch affirmed Walt Disney’s Long-Term Issuer Default Rating of A but revising the outlook from Stable to Negative, as they foresee Disney to recover quickly as the effect of Covid-19 subside in the near future. 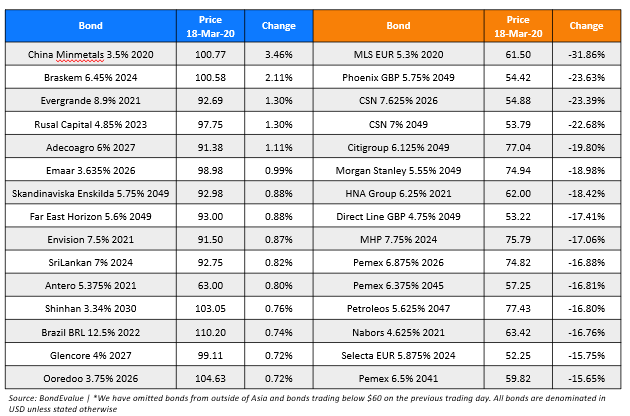 (ATF) China has approved the setting up of a distressed asset manager – the first such approval in over 20 years, as the country sees a sharp pick up in bad loans in the wake of the coronavirus outbreak.
Beijing has decreed that Jiantou Citic Asset Management Co Ltd will be converted into an asset management company under the name China Galaxy Asset Management Co Ltd.
Earlier, regulators said that Chinese banks’ non-performing loans had piled up to 3.3 trillion yuan (about US$471 billion) by the end of February. The ratio of NPLs had risen to 2.08% of total loans from 2.03% in the previous month.
China’s existing four national asset managers – China Great Wall, China Orient, China Huarong and China Cinda, were established in 1999 to buy, manage and sell off a total of 1.4 trillion yuan of NPLs from the big four state-owned commercial banks after the Asian financial crisis in the late 1990s.

A bridge loan too far blows up world bond markets

Investors had no place to hide as stock and bond markets tanked simultaneously for the first time since the 1980s, when markets offered no hedges against collapsing values.
In 2008, bond prices rose sharply as stock markets crashed. Now bonds offer no refuge against collapsing stock prices. The difference is that total US public debt outstanding has risen from about $9 trillion at the beginning of 2008 to $23.5 trillion today.With equities down nearly 6% in Europe and US markets poised to open with similar losses, European bond yields soared and US bond yields rose, as governments prepared trillions of dollars of new debt financing to support economic stimulus and market bailout programs. Between March 9 and this morning, so-called real yields, that is, the yield on inflation-protected US government securities, had risen from a trough of negative 1% to positive 0.4%, the fastest yield spike in market history.

HSBC will be forced to delay radical restructuring if crisis deepens

HSBC will be forced to delay a plan to slash 35,000 jobs and drastically shrink its balance sheet in Europe and the US if the global coronavirus outbreak morphs into a long-term crisis.
Last month, the bank unveiled what Noel Quinn, chief executive, described as one of the “deepest restructurings” in HSBC’s 155-year history. The bank said it wanted to cut annual costs by $4.5bn and shed $100bn of assets adjusted for risk by the end of 2022, with the aim of reducing its headcount from 235,000 to 200,000 over three years.
However, the bank’s executives now accept that the coronavirus outbreak means they will be forced to adjust the pace at which they execute the restructuring, according to four people briefed on HSBC’s plans.