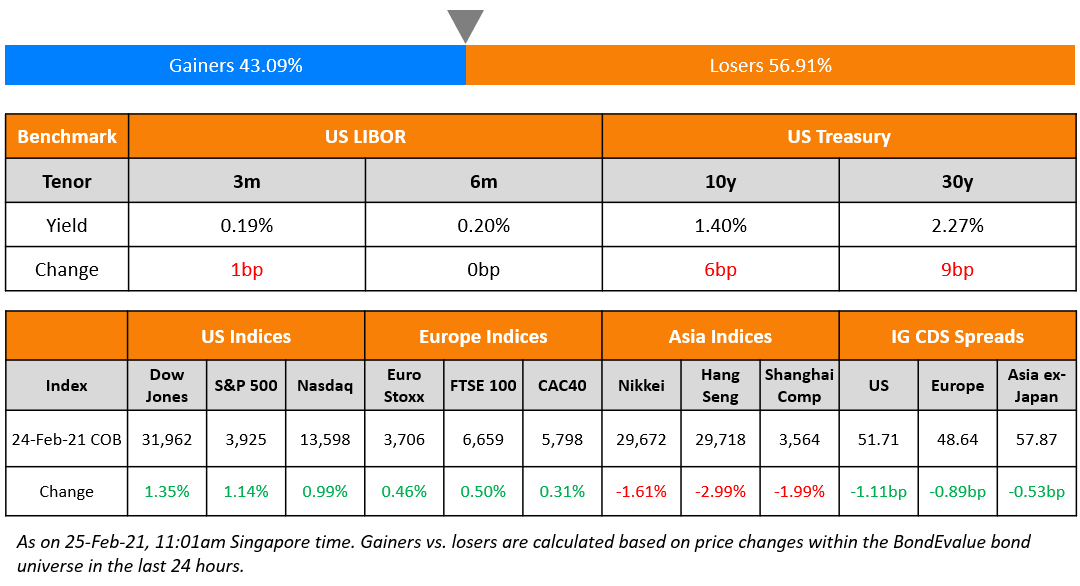 S&P ended 1.1% higher while Nasdaq was 1% higher. Tesla rallied 6% with a mixed session for big tech – Facebook, Amazon and Apple were lower by 0.6%, 1% and 0.4% while Google and Netflix were up 1.2% and 1.3%. Fed Chair Powell reiterated the primary goal of full employment and said it may take over three years for inflation to exceed the 2% target. US 10Y Treasury yields eased some of its 9bp sell-off to 1.43% to close at 1.40%. European equities were also higher by over 0.5%. German GDP growth in Q4 2020 was revised upward to 0.3% from 0.1%. US IG CDS spreads were 1.1bp tighter and HY was 6.7bp tighter. EU main CDS spreads tightened 0.9bp and crossover spreads tightened 3.2bp. Asian equity markets have opened ~1% higher today while Asia ex-Japan CDS spreads are 0.5bp tighter. Momentum in the Asian primary markets continue with six new dollar deals launched today dominated by Chinese issuers.

Register before the end of the month for the Bond Traders’ Masterclasses scheduled for late-March and early-April to get a 25% + 10% discount on the bundle package of five modules. Click on the image below to register. 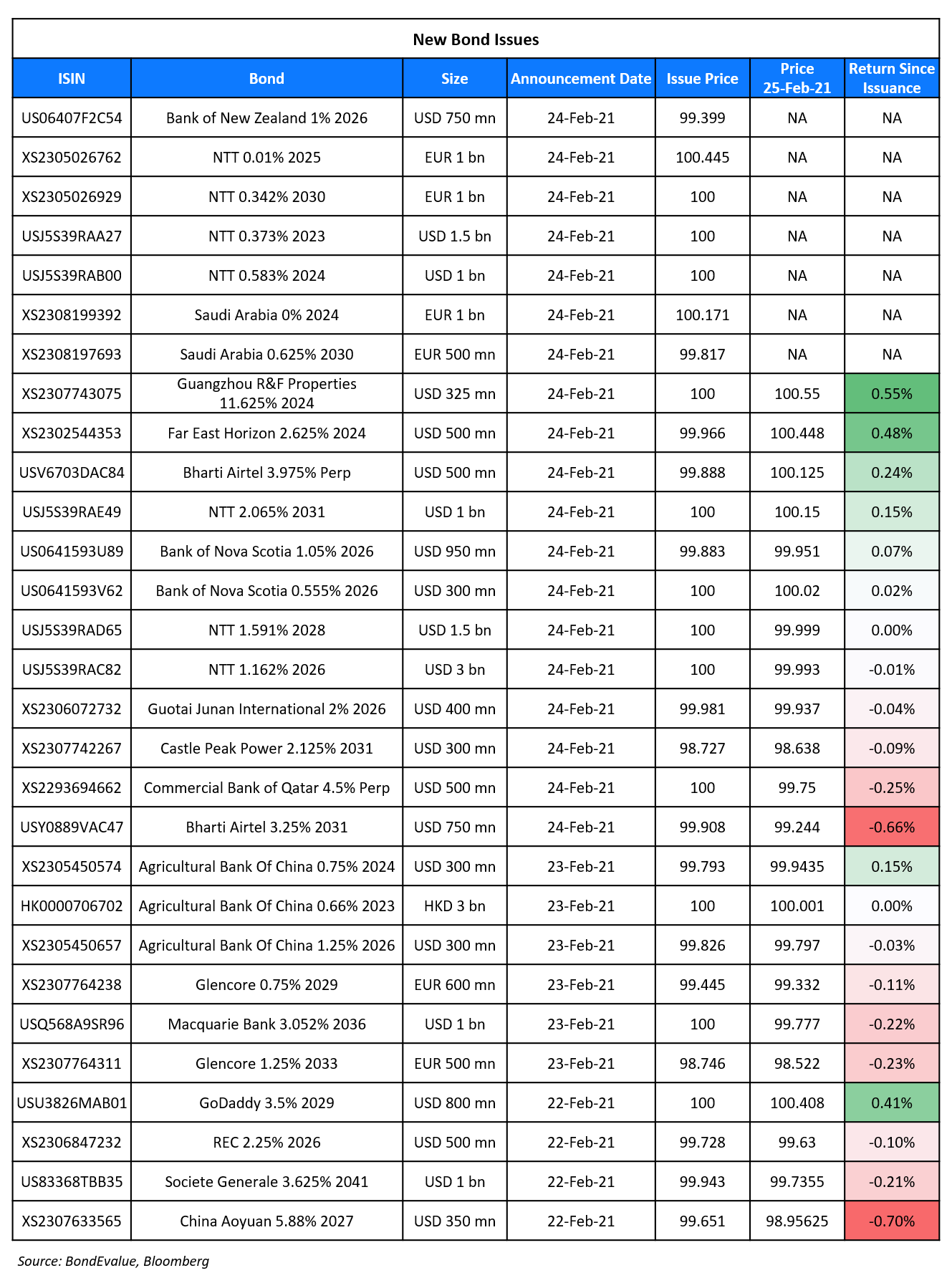 Guangzhou R&F Properties raised $325mn via a 3.5Y non-call 2.5Y bond (3.5NC2.5) at a yield of 11.625%, 37.5bp inside initial guidance of 12% area. The bonds have expected ratings of B+ and received orders of over $1.6bn, 4.9x issue size. Proceeds will be used for debt refinancing. Easy Tactic is the issuer and R&F Properties (HK) is the guarantor, while Guangzhou R&F is the keepwell and equity interest purchase undertaking provider. The bonds were priced at a new issue premium of 72.5bp over their older 8.125%% bonds due July 2024, which are currently yielding 10.9% on the secondary markets.

Commercial Bank of Qatar (CBQ) raised $500mn via a Perpetual non-call 5Y (PerpNC5) AT1 bond at a yield of 4.5%, 20bp inside initial guidance of 4.7% area. The bonds were unrated and received orders of over $900mn, 1.8x issue size. As per IFR, Commercial Bank is Qatar’s second largest conventional bank and third largest bank overall by assets, net loans and deposits with an issuer rating of A3/BBB+/A. CBQ’s AT1 offers a coupon 50bp higher than peer Ahli Bank QSC’s (A2/A) recent 4% Perp issued last week and 12bp lower than DIB’s (A3/A) 4.625% Perp Sukuk issued in Nov 2020.

Far East Horizon raised $500mn via a 3Y bond at a yield of 2.637%, or T+240bp, 45bp inside initial guidance of T+285bp area. The bonds have expected ratings of BBB-, and received orders over $3.3bn, 6.6x issue size. Asia Pacific bought 93% of the notes and EMEA 7%. Asset managers, fund managers and hedge funds received 70%, banks and financial institutions 20%, sovereign wealth funds and insurers 8%, and private banks and corporates 2%. Proceeds will be used for working capital and general corporate purposes.

Guotai Junan International raised $400mn via a 5Y bond at a yield of 2.004%, or T+142.5bp, a strong 47.5bp inside initial guidance of T+190bp area. The bonds have expected ratings of BBB+ and received orders over $2.7bn, 6.75x issue size, revised from $3.8bn after the tightening. Asian investors took 97% of the notes and EMEA 3%. Banks received 49%, fund managers, asset managers and hedge funds 41%, and the public sector and insurers 10%. Proceeds will be used for refinancing and general corporate purposes.

Bank of New Zealand raised $750mn via a 5Y bond at a yield of 1.124%, or T+52bp, 18bp inside initial guidance of T+70bp area. BNZ is a fully owned subsidiary of National Australia Bank. The bonds are expected to be rated A1/AA-.

Spin-offs are a corporate re-organization strategy used by a company to create a new subsidiary from its parent company. The parent separates (spins-out) part of its business into a second publicly-traded entity and distributes shares of the new entity to its current shareholders. Spin-offs come in different types like pure play spin-offs, equity carve outs etc. Reliance Industries is spinning off its new oil-to-chemicals operation into an independent unit.

Clarida said that he’s “bullish” on the outlook for the U.S. economy and sees inflation at the Fed’s 2% goal by year’s end, after what he expects to be a temporary rise above that level before then due to “base effects.” He added that the Fed’s current monetary policy settings are appropriate now and “for the rest of the year”.

“The market is nervous about additional stimulus, worried about the risks of higher inflation, and concerned about QE tapering,” said Goldberg. “The selloff is likely being exacerbated by convexity hedging and positioning stop-outs.”

“It certainly feels like a tantrum is underway. Despite the Fed’s repeated reassurances that they see no clear risks to higher inflation investors are not convinced,” said . “Any hints of change in Fed asset purchases could put the brakes on the back-end selloff. Barring that, there could be more room for yields to rise.”

“Bonds are getting oversold, though in the short term and I wouldn’t be surprised if the rise tooka breather,” Boockvar wrote.

“We need the Fed to sound concerned about the rise in real rates and suggest that they are not about to taper anytime soon. That can scare away some shorts in the Treasury market,” Misra said. “He said that the rise in rates reflects confidence in the economy. I think the rise in rates also reflects nervousness about Fed support.”

On the buy opportunity from the surge in US Treasury yields – Akira Takei, a global fixed-income money manager at Asset Management One

“Technically, the 10-year U.S. yield is looking attractive and we are shifting part of our investment in Australia into Treasuries,” Takei said. “Japanese investors may think back later and say it was good they bought Treasuries now.” “U.S. yields have been lower compared to many other developed nations and have underperformed those in Australia, but they are catching up now,” Takei said.

On corporate bonds with the highest credit grades most exposed to yield surge – in a note by Bank of America Corp. strategists led by Hans Mikkelsen

Spread widening shows “credit investors uncomfortable with interest rate uncertainty,” they wrote. “The right time for much more rates risk — including for a rates shock — is over the summer with the U.S. back to normal and potentially clear signs of improvement in Europe,” the strategists wrote. 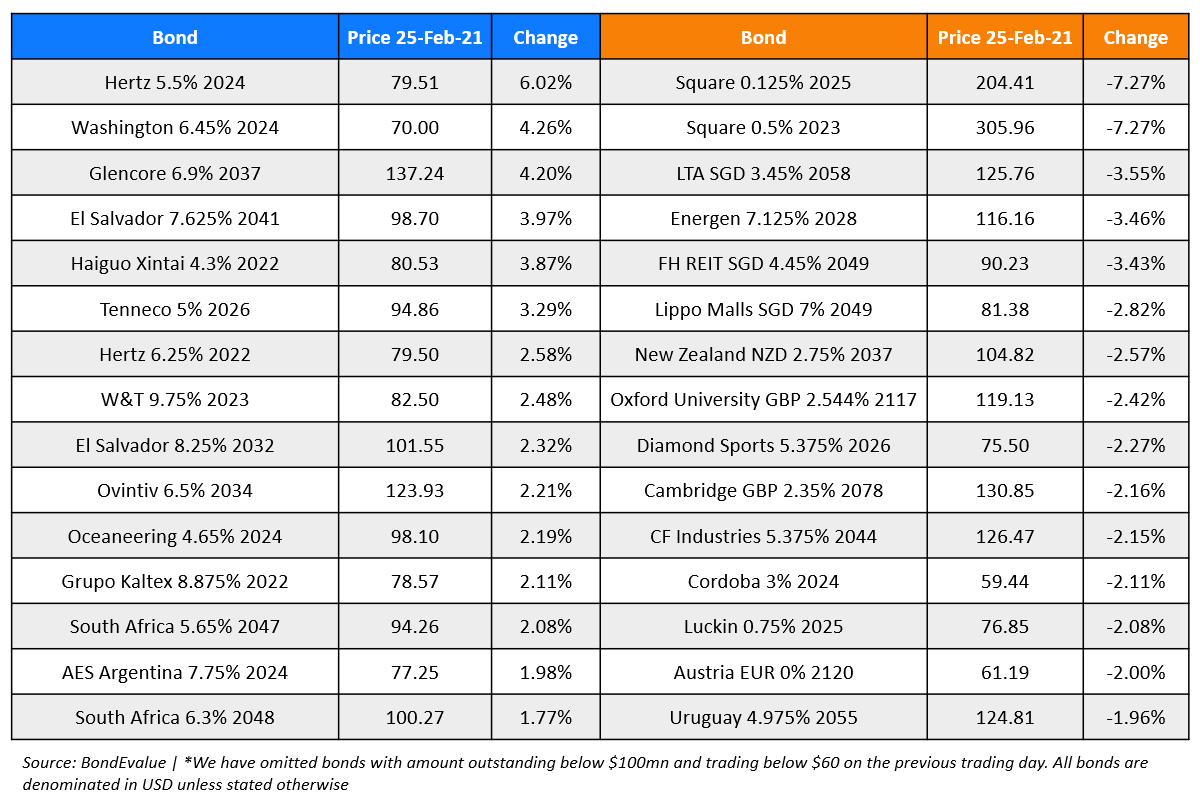