Wanda Group, which sold its majority control in AMC’s theatres business, stares at a looming maturity wall with total debt amounting to $25bn as per Bloomberg data. About $6.5bn is due this year with another $2.4bn and $4bn due in the next two years. Cash and cash equivalents amount to over $7bn based on Q2 2020 numbers. “The group’s liquidity is a key consideration for investors,” said Dan Wang, an analyst at Bloomberg Intelligence. The company’s bonds have been on the decline since the start of this month, as seen in the chart below. 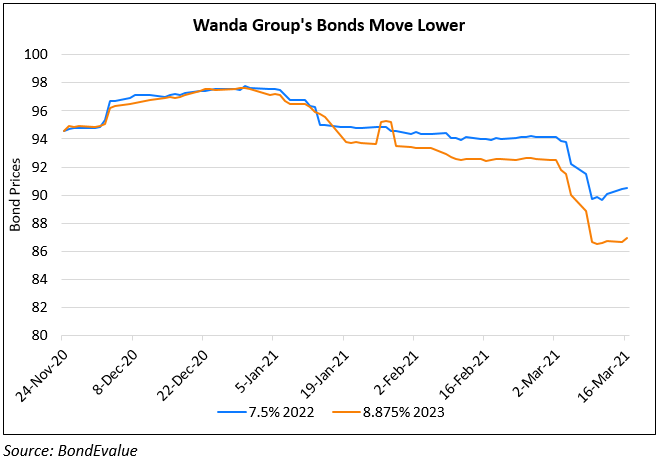 Wanda reduced its control in AMC earlier this month that would see its voting power fall to less than 10% after converting its superior Class-B shares into Class-A. Wanda’s Class B shares came with a super voting feature, such that each share carries three votes provided that Wanda’s economic ownership of AMC remained above 30% of the outstanding shares. In October, Wanda had held 37.7% of AMC and with it 64.5% of the voting rights. This changed to 23.1% of AMC and 47.4% of voting power in end-December. The move came after it sold its last overseas real estate project in Chicago last year.