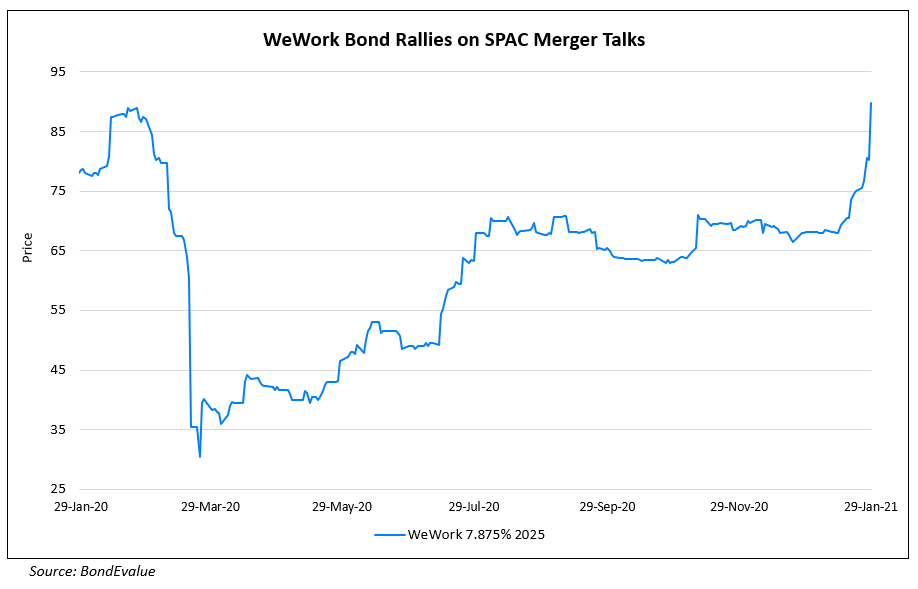 Co-working company WeWork saw its 7.875% bonds due 2025 jump 10 points on Thursday on news of the company going public via a merger with a special purpose acquisition company (SPAC). This comes about 16 months after WeWork’s failed IPO attempt. According to a person familiar with the matter that spoke to Bloomberg, WeWork’s board has received offers from various SPACs, also known as blank check companies, and is weighing that option vs. a private funding round. Marcelo Claure, WeWork’s executive chairman and COO of Softbank Group Corp said, “We have SPACs approaching us on a weekly basis. We’re humbled that is happening because a year ago, nobody wanted to even be associated with WeWork.” WSJ reported that the deal could potentially value WeWork at $10bn, significantly lower compared to its peak valuation of about $47bn two years ago. The company’s bonds took a beating last March, along with most other financial assets, when fears surrounding the pandemic were at its peak, falling as low as 35 cents on the dollar. It has since steadily recovered to trade at ~70 levels since August, before jumping further since January 20 to currently trade at 89.5 cents on the dollar, yielding 10.95%.