Markets in the US and Europe saw gains overnight as sentiment improved with lockdowns easing and the BOJ pledging to buy unlimited amounts of JGBs. The DJI, S&P and Nasdaq gained 1.51%, 1.47% and 1.11% respectively, despite a 20% slide in US crude due to storage concerns. Europe’s main and crossover CDS spreads tightened 3.5bp and 6bp to 81bp and 494bp respectively. The US investment-grade CDS spread narrowed 0.5bp to 93.5bp and Asia-ex Japan IG CDS spreads tightened 4bp to 120bp. Asian markets and US index futures are opening slightly lower by 0.25%-0.50% this morning. 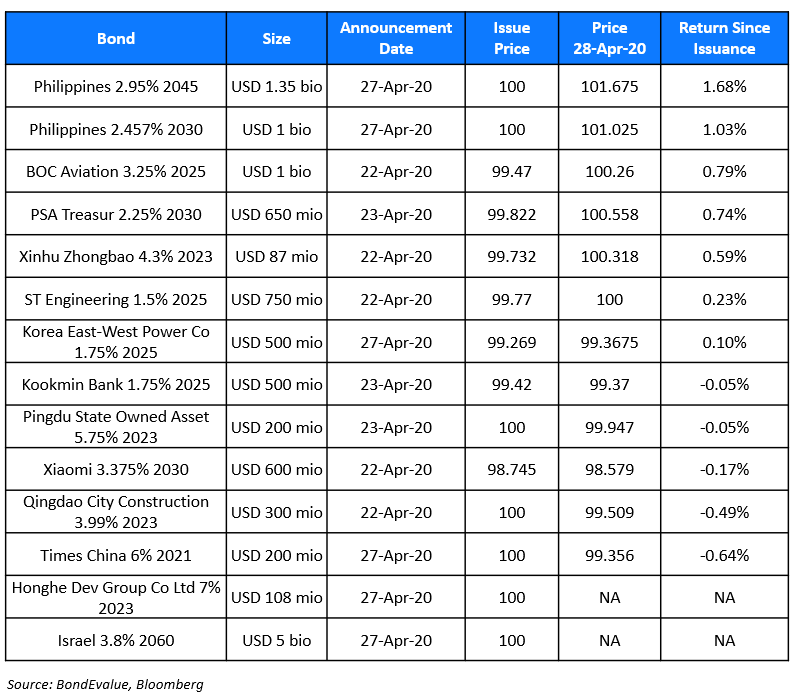 “The transaction was able to achieve the Republic’s lowest ever coupon for a 10 and 25-year benchmark issuance amidst no less than an environment gripped with pandemic fear,” said National Treasurer Rosalia de Leon in a statement. “This makes the Philippines, at least for the time being, a diamond in the sovereign issuance space for we were able to convert immense pressure into an opportunity to dazzle in brilliant shine.”

Korea East West Power, rated Aa2/AA, raised $500mn via 5Y bonds at a yield of 1.904%, 150bp over Treasuries and 40bp inside initial guidance of 190bp area. This is in line with the 150bp spread over Treasuries for the recent 5Y bond issued by Korean Bank Kookmin Bank, rated A+, despite the one notch higher rating.

To avoid contagion across asset managers after Franklin Templeton’s decision to shut several of its funds, RBI unveiled an INR 500bn or $6.6bn liquidity infusion plan for mutual funds. The funds that Franklin is closing had focused on lower-rated bonds offering high interest rates. Other asset managers are also feeling the strain. BOI Axa, a joint venture between state-run Bank of India and French insurer Axa, last week marked down some of its bond holdings. Starting on Monday, the RBI will channel to banks, through a repo operation, funds that the lenders must then loan to mutual funds or use to buy assets from them.

Unrated Lenovo Group returned to the Reg S-only dollar bond market the week before last after a two-year absence and was able to upsize the deal on strong demand despite a still relatively sluggish primary market. The $650m of five-year senior notes were priced at par to yield 5.875% on April 17, equal to 555bp over Treasuries and inside initial guidance of 6.125% area. The deal drew a final order book of more than $2bn, including $260m from the leads. This allowed the issuer to exceed its initial size target of $300m–$500m, according to a banker on the deal. Lenovo still has a $350m offshore debt issuance quota following the transaction. Nomura views Lenovo as a BB+/BB credit and compared it with stronger sector peers such as AAC Technologies and Huawei, as well as BB+/BB names such as Yanzhou Coal and Country Garden. Deutsche Bank compared it with Huawei along with weak BBB/strong BB names such as Shimao Property and GLP China.

By lending widely to businesses, states and cities in its effort to insulate the U.S. economy from the coronavirus pandemic, it is breaking century-old taboos about who gets money from the central bank in a crisis, on what terms, and what risks it will take about getting that money back. And with large-scale purchases of U.S. Treasury securities, the Federal Reserve is stretching the boundaries for what a central bank will do to finance soaring federal debt—actions that move it deeper into political decisions it usually tries to avoid.

Fed leaders don’t like doing any of this. They believe they have no better alternative. “None of us has the luxury of choosing our challenges; fate and history provide them for us,” Fed Chairman Jerome Powell said in a speech this month. “Our job is to meet the tests we are presented.” Economists project the central bank’s portfolio of bonds, loans and new programs will swell to between $8 trillion and $11 trillion from less than $4 trillion last year. In that range, the portfolio would be twice the size reached after the 2007-09 financial crisis and nearly half the value of U.S. annual economic output.

The central bank signaled that it would intervene as needed to soak up higher bond issuance by the government and keep interest rates low, warning that Japan’s economy was in an “increasingly severe situation”. The pledge of unlimited government bond purchases may have little practical impact, however, with the central bank already buying far less than its previous cap of ¥80tn ($740bn) a year. Japan’s journey back into deflation this year will in effect mark the defeat of Mr Kuroda’s campaign to end falling prices. The BoJ expects prices to drop by 0.6 per cent in the fiscal year to March 2021, excluding the impact of last year’s consumption tax rise, before turning positive the following year. After a modest increase in corporate bond buying in March, the BoJ was more radical on this occasion, quadrupling its maximum purchases of corporate paper to ¥20tn until September 2020. Direct central bank buying of corporate debt should make it easier for large companies to finance themselves at low interest rates.

Bank Indonesia is poised to buy sovereign bonds directly from the government on Tuesday, underscoring a massive shift that is playing out in Asia’s investment landscape. International investors hold almost one-third of Indonesia’s sovereign debt and rely on it for its high yields. Their stakes are larger still in Australia and New Zealand, where they own about half of all government bonds. “We need to have an exit strategy sometime down the road, but right now we need (an) aggressive policy reaction and most Asian policy makers have been delivering,” said Jean-Charles Sambor, head of emerging-markets fixed-income at BNP Paribas Asset Management in London. “The issuance pipeline is more manageable in Asia than in other regions.” 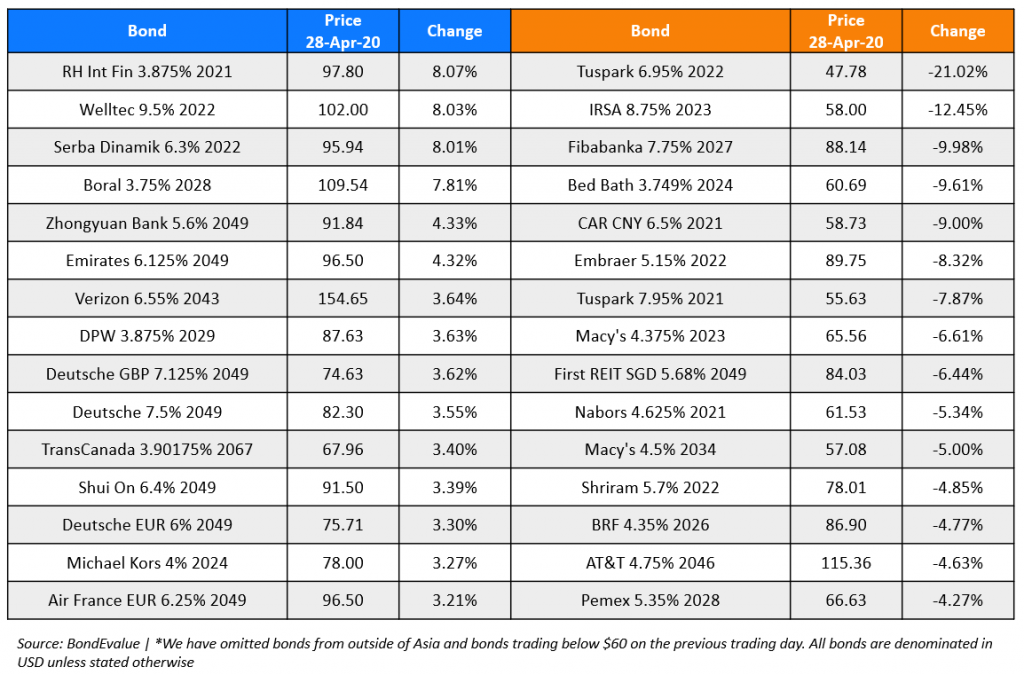