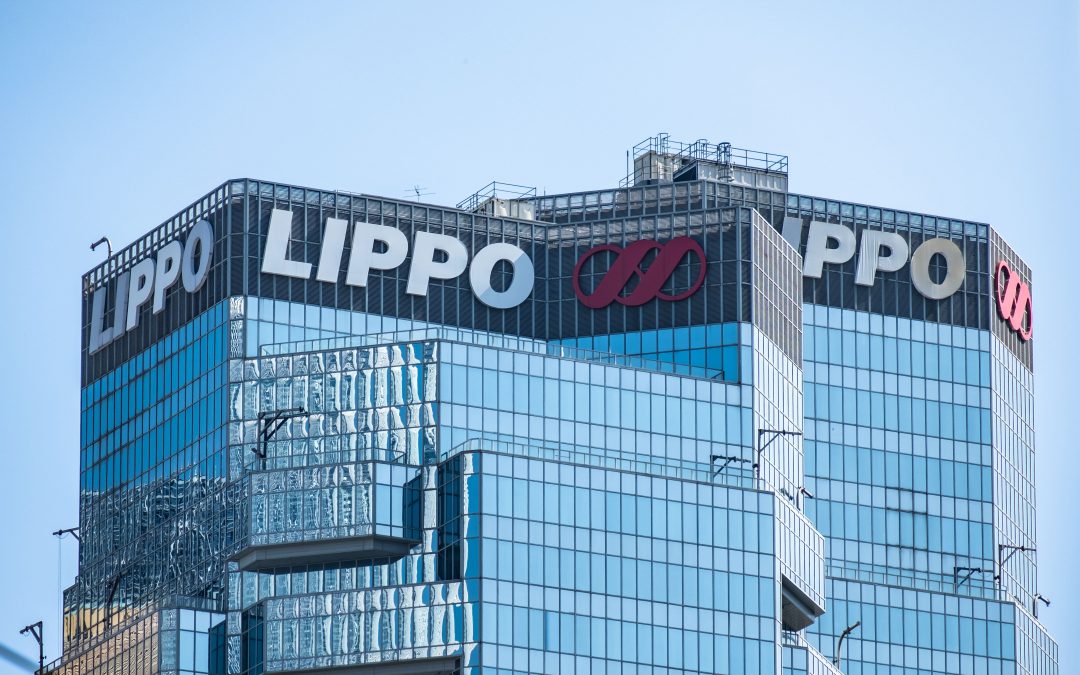 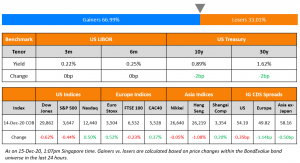 Nasdaq outperformed the broader market and was up 0.5% while S&P was down 0.4%. Tesla was up 4% and Alexion was up 29% on the buyout news from AstraZeneca. US 10Y Treasury yields at 0.9%, continued to trade in a narrow range. The two-day FOMC meeting commences today with the decision tomorrow – economists expect new guidance though not any action with regard to bond buying. European equities were aided by news that the UK and EU had agreed to extend Brexit talks, increasing hopes that a trade agreement could be reached. DAX and CAC were up 0.8% and 0.4% although FTSE was lower by 0.2% as GBP rallied. US IG CDS spreads widened 0.4bp while HY tightened 0.4bp. EU main CDS spreads and crossover CDS spreads were tighter 1.1bp and 7.2bp respectively. Asia ex-Japan CDS spreads were 0.5bp tighter and Asian equities have opened lower by ~0.5% following Wall Street.

Complimentary Webinar –  Navigating The Bond Markets by Leveraging The BEV App
Sign up for the upcoming webinar on Navigating the Bond Market by Leveraging the BEV App at 4PM Singapore/HK time tomorrow, December 16. The module is specially curated to help the users exploit the BondEvalue app to manage their bond portfolio on the WebApp as well as the Mobile App. It will cover the following topics. 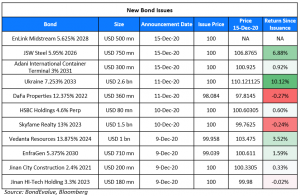 Lippo Malls Indonesia Retail Trust (LMIRT) announced on Monday that it will not pay a coupon on its S$120mn ($89.8mn) 6.6% perps on December 19 due to technical reasons. The press release mentioned that under its $250mn 7.25% 2024s issued in June 2019, LMIRT is restricted to make any distributions in the form of distributions on perps or dividends if its total leverage is above a regulatory gearing limit (currently 50%), or if the total distributable income is less than zero. If the aggregate distributable income is zero, LMIRT can pay up to $5mn during the remaining tenure of the dollar bond. As at 30 September 2020, LMIRT’s aggregate distributable income net of any distributions made to holders of perps and unitholders since the note’s issuance was zero. With that, the $5mn limit was fully utilized to pay S$4.9mn ($3.67mn) of distributions on perps in September 2020 and S$2mn ($1.5mn) in dividends to unitholders for 3Q2020. A notice was sent to holders of the non-cumulative 6.6% perps on the matter.

Indian steelmaker JSW Steel tapped the international bond markets on Monday with a $250mn tap of its 5.95% 2026s, priced at 106.75 to yield 4.509%, 21bp inside initial guidance of 105.75 / 4.718%. The bonds, rated Ba2/BB- received orders worth $750mn, 3x issue size. Wholly owned subsidiary Periama Holdings will be the issuer with a guarantee for 125% of the bond’s face value from JSW. While both Moody’s and Fitch have a negative outlook on the company, Moody’s noted that JSW’s debt to adjusted EBITDA ratio improved to 5.8x in September vs. 7x in June. Joint MD Sheshagiri Rao said in an interview with Bloomberg TV that current debt levels are not “worrisome at all” and that the company aims to bring down its debt to EBITDA ratio to 3.75x. He added that the Indian economy witnessed a good recovery from June and expects the momentum to continue with demand from sectors such as automobiles.

Adani International Container Terminal Pvt Ltd (AICTPL) raised $300mn via 10Y amortizing bonds at a yield of 3%, 50bp inside initial guidance of 3.5% area. The bonds have a door to door tenor (Term of the day, explained below) of 10Y and a weighted average life (WAL) of 7Y. The bonds have expected ratings of Baa3/BBB- and received strong orders of overs $2.85bn, 9.5x issue size. Asia took 56% of the issue, EMEA 20% and US the remaining 24%. Asset/fund managers bought 83% of the issue, insurers and pension funds 15% and banks and others 2%. Proceeds will be used to repay senior debt and a portion of subordinated shareholder loans. There is a change of control put at 101 upon a ratings downgrade and if the Adani Group and/or Terminal Investment Ltd Holding cease to own 26% of the issuer’s equity shares. AICTPL is a 50:50 joint venture between Adani Ports and Special Economic Zone and Terminal Investment Ltd Holding.

As per Fitch, the bonds are partially amortizing, with a 20.5% balloon repayment at maturity. The bonds have a covenant to restrict distributions where 100% of cash will be trapped if the trailing 12 month Debt Service Coverage Ratio (DSCR) drops below 1.5x (currently at 1.9x) or if the project life cover ratio drops below 1.95x. The notes also have a six-month debt service reserve account, which is a senior debt restricted amortization account. This account would help mitigate the risk from the balloon repayment at maturity as the issuer is required to send cash up to the outstanding debt service amount (including principal and interest), starting three years prior to the maturity date.

As a part of its strategy to sell its non-core businesses, American retailer Bed Bath & Beyond has entered into a definitive agreement to sell its banner Cost Plus World Market (CPWM) to Kingswood Capital Management, a Los Angeles-based private equity firm. Under the agreement, Bed Bath & Beyond will sell 243 brick-and-mortar locations, the CPWM digital business, 2 distribution facilities and a corporate office located in Alameda, California. CPWM is a part of Bed Bath’s non-core business and is expected to continue operations as a stand-alone retail brand. In November, the company had also completed the sale of its Christmas Tree Shops retail banner, its institutional Linen Holdings business and a distribution center located in Florence, NJ worth $250mn as a part of its strategy to sell non-core assets conceived in October. The omnichannel retailer is pursuing a “Fast-Paced Transformation strategy” and has also approved a new $150mn accelerated share repurchase program (ASR) while expanding its share buy-back plan by $150mn to $825mn. Under the original share repurchase program planned in October, the company had decided to buyback shares totaling $675mn over the next three years of which $225mn were to be purchased under the accelerated share purchase program. The repurchase of the shares under the ASR is expected to be complete by February next year. CEO Mark Tritton said, “We’ve taken deliberate steps throughout the year to streamline our portfolio and fortify our strategic focus…  In all, we have unlocked significant value from the divestiture of 5 business concepts this year” and added, “We are pleased to announce the approval of a second ASR program which reinforces… confidence in our strategic growth plan.”

French retailer Casino Group launched a new euro-denominated bond alongside a tender offer on Monday. Details of the new bond and tender offer are as follows:

The new bonds are expected to be rated Caa1/B vs. an issuer rating of B3/B and carry a change of control put at 101. The company press release stated that “The new bonds include the same restrictions on dividends as those of the November 2019 financing. Therefore, dividend payments will be restricted unless the Group’s covenant ratio (debt to EBITDA ratio, which stood at 6.46x as of September 30) is below 3.5x post payment of any dividend.” The dividend restrictions are beyond an envelope that will allow the payment of ordinary dividend. The envelope will have a floor of €100mn ($122mn) distributable every year starting in 2021 and will be calculated as 50% of the underlying net profit. There’s an additional envelope of €100mn ($122mn) that will be available in one or several installments over the life of the financing.

Shandong Ruyi Technology Group, considered the LVMH of China, defaulted on a CNY 1bn ($153mn) local currency bond by not paying interest and principal as per a filing. The Chinese textiles maker joins a list of Chinese companies like Tsinghua Unigroup and Yoncheng Coal that have defaulted over the past few weeks. One key difference is that Shandong Ruyi is privately held, unlike the earlier defaulted corporates that are backed by the state. Shandong Ruyi built up debt of over $4bn to buy majority stakes in brands like ‘The Lycra Company’ and ‘Gieves & Hawkes’. The textile company had earlier this year negotiated with bondholders to delay an interest payment hoping for an investment by Jinan City Urban Construction Investment, a local government financing vehicle (LGFV). The LGFV backed out from a plan to buy a 26% stake in Shandong Ruyi in June this year especially with tight scrutiny on the LGFV schemes overall. Rating agency Moody’s had sounded an alarm on the issuer when it downgraded the company by two notches to Caa3 in late March citing tight liquidity position and heightened refinancing risks. Shandong Ruyi also has an interest payment on a local bond due today.

The company’s dollar bonds have been trading at distressed levels. Prime Bloom Holdings’ 6.95% dollar bonds due 2022, guaranteed by Shandong Ruyi, are currently trading at 19.5 cents on the dollar.

Door to door tenor refers to the total time period within which the entire borrowing has to be repaid, inclusive of moratoriums and postponements. For example, a loan may be payable in three years but with an initial moratorium of 6 months, totaling to a door to door tenor of 3.5 years. These are mentioned in project finance documents. Adani International Container Terminal’s recent bond issuance has a door to door tenor of 10 years and a Weighted Average Life (WAL) of 7 years.

On the Fed expected to offer new guidance on bond buying

“The fiscal outlook may be an important factor with respect to potential changes to the Fed’s” bond purchases, Ryan said. “All else being equal, less fiscal stimulus would put more pressure on monetary policy makers to provide more accommodation to achieve their goals.”

“By focusing spending there, they could achieve the same amount of stimulus using less ammunition,” he said.

“As long as the coordination is done willingly and without threats, it makes sense for the Fed and Treasury to coordinate during extraordinary times,” said Naroff.

On the ECB ready to do more – Fabio Panetta, ECB board member

“We can guarantee our commitment to support the recovery,” Panetta said. “We stand ready to adjust all our instruments if downside risks to the outlook materialise, including those stemming from exchange rate dynamics.” “There should be no doubt here: the ECB will not accept inflation settling at levels that are inconsistent with its aim,” said Panetta.

On the need to act urgently to avert global solvency crisis – according to a report led by Mario Draghi, previously president of the European Central Bank, and Raghuram Rajan, the ex-governor of the Reserve Bank of India

“The solvency crisis is already eroding the underlying strength of the business sector in many countries,” according to the report. “The problem is worse than it appears on the surface, as massive liquidity support, and the confusion caused by the unprecedented nature of this crisis, are masking the full extent.” “There is an urgent need to act before it is too late,” the authors wrote. “Providing support to the corporate sector in the most efficient and effective way is essential to protecting living standards around the world, and to preparing the ground for long-term economic resilience and growth once the worst effects of the pandemic have abated.”

“The credibility of government guarantees has been the most important bulwark against financial crisis so far. Now we are seeing signs that this credibility is eroding,” according to Wright

“Certain companies’ stocks not being included in some global indexes will not prevent international investors from investing in these companies through various other methods and sharing the dividends of China’s development”, said Wang Wenbin.

On China has no plan to replace USD with digital yuan – Zhou Xiaochuan, former governor of the PBoC

“If you are willing to use it, the yuan can be used for trade and investment […] But we are not like Libra and we don’t have an ambition to replace existing currencies”, said Zhou Xiaochuan. 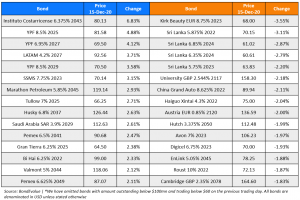