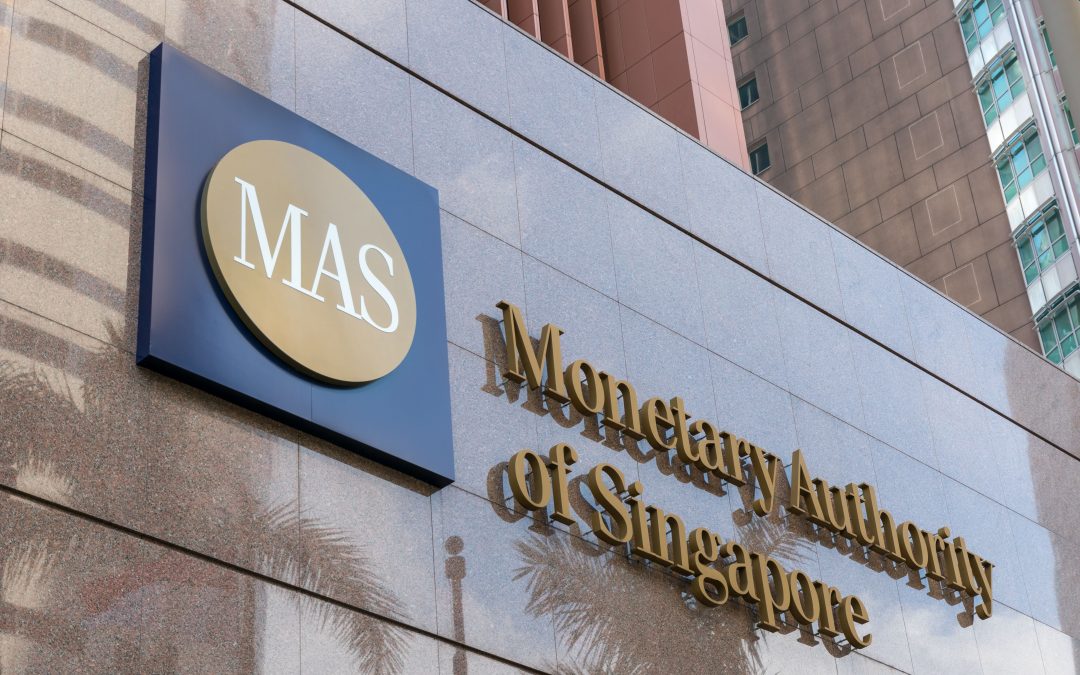 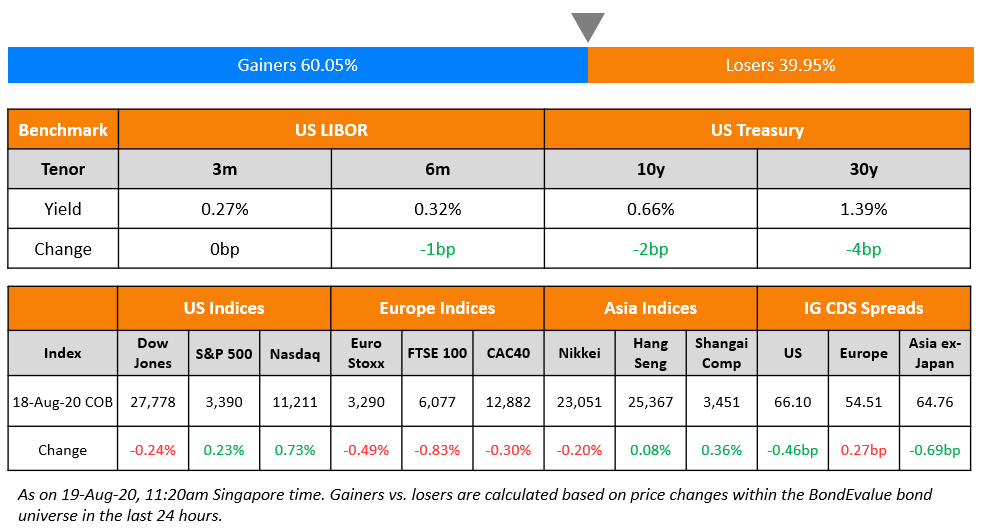 The S&P 500 closed at an all-time high on Tuesday for the first time since the Covid-19 pandemic hit the United States. “This would make the Covid bear market the shortest in history, at just 1.1 months”, said S&P Dow Jones Indices’ Howard Silverblatt. Despite the human and economic toll of the coronavirus, and a stalemate in Washington regarding the new stimulus package, investors have cast aside all bad news and have focused on signs that the worst might be over. This confidence also stems from the Federal Reserve’s steadfast support and low interest rate policy. “It seems to me that markets have decided this economic environment is the best of both worlds: enough economic recovery to support corporate earnings and prevent a substantial recession, but not so much that the Fed would have to raise interest rates and tighten monetary policy,” said Scott Clemons, chief investment strategist for private banking at Brown Brothers Harriman, an investment bank. US treasury yields were lower by 2-4bp. European shares did not fare as well and European primary bond market saw its third session with no deals. CDS spreads were mostly unchanged and Asian markets are also opening mostly unchanged this morning. Hong Kong landlord Hysan Development raised $300mn via a Perpetual non-call 3Y (PerpNC3) to yield 4.85%, 45bp inside initial guidance of 5.3% area. The bonds, with expected ratings of A3, received final orders over $2.9bn, 9.66x issue size. The coupon on the perps is fixed for life. Coupon payments can be delayed at the issuer’s sole discretion, but there is a dividend stopper as well as pusher with a three-month look-back period.

Singapore has emerged as one of the first major economies to issue debt that is linked to the Singapore Overnight Rate Average (SORA), an alternative benchmark to the Libor. The Monetary Authority of Singapore (MAS) sold S$500mn ($366mn) of six-month notes with a spread over the SORA on Tuesday. The issuance is part of a broader push by central banks across the world to replace the Libor, which is to be phased out by end-2021 after the scandal around European and US banks manipulating the Libor came to light. Prior to this, the benchmark used for SGD-linked debt was the SGD Swap Offer Rate (SOR), which uses the Libor in its computation. The MAS defines the SORA as the volume-weighted average rate of borrowing transactions in the unsecured overnight interbank SGD cash market in Singapore between 8am and 6.15pm.

John Coleman, senior managing director of the fixed-income group at R.J. O’Brien & Associates in Chicago said, “It’s a big deal. The buy-side community has to adjust. When they see a government going this way, it’s no longer a gimmick or something that may go away.” Jonathan Horan, partner at Linklaters LLP in Singapore added, Singapore’s move “may convince other governments and jurisdictions to look at their own practices. Everyone needs to focus on this as the date for Libor discontinuance looms.” The US is expected to follow soon with debt linked to its preferred replacement for the dollar Libor, the Secured Overnight Financing Rate (SOFR).

Investors Pile Up on Junk Debt In Pursuit of Yields

Falling bond yields across the globe have pushed bond investors to venture deeper into junk territory. In the chart below, we have plotted the yields of the Bloomberg Barclays Global Corporate Index for different rating categories, from the lowest investment grade rating of Baa down to the deep junk rating of Caa. 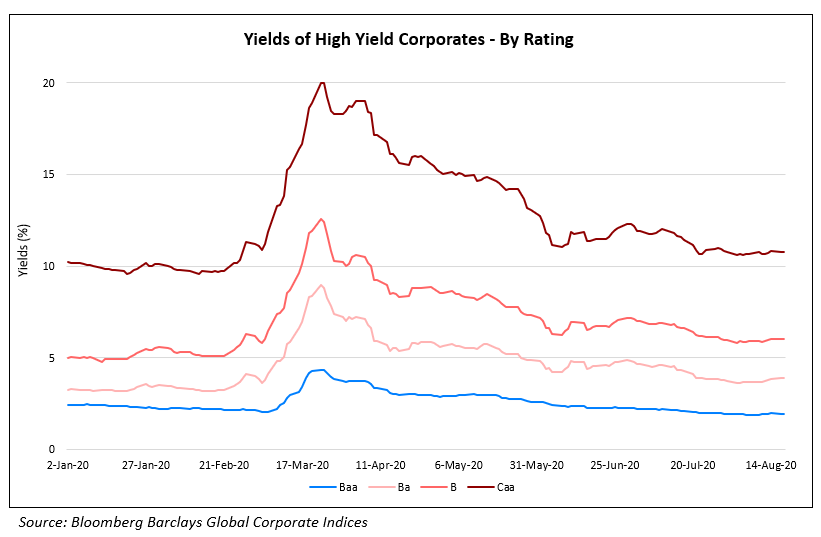 As per the indexes, Baa-rated corporates are currently yielding just 1.95% vs. 3.88% for Ba, 6.05% for B1 and 10.8% for Caa-rated corporates. Tom Ross, a portfolio manager at Janus Henderson said, “The higher quality companies are simply not providing the yield. For fund managers that want to outperform you have to do the credit work and really try to understand some of these lower rated companies.” The Fed’s support to corporate bonds, including junk-rated bonds has pushed yields across the high-yield spectrum lower, now just slightly higher than pre-pandemic levels at the beginning of the year.

Teva Sued by US Over False Medicare Claims

In its latest move, the US government sued Teva Pharmaceutical Industries on Tuesday on allegations of submitting false Medicare claims. According to the US government, Teva had paid kickbacks to boost the sales of one of its largest selling drug Copaxone, which is used as a cure for multiple sclerosis. The government has filed a lawsuit in a Boston District Court, seeking triple damages on charges that Teva violated the federal False Claims Act from 2006 to 2015 when it paid the charitable foundations more than $300mn to cover the Medicare co-payment obligations of Copaxone patients while shielding them from a four-fold increase of Copaxone’s price. According to the complaint, Teva would refer Copaxone patients to Advanced Care Scripts Inc, a specialty pharmacy, which later arranged co-payments coverage from two foundations, the Chronic Disease Fund and The Assistance Fund. The Israeli pharmaceutical company allegedly exploited the existing law as per which drug makers are not allowed to subsidize co-payments for patients enrolled in Medicare, but can donate to independent nonprofits that offer co-payment assistance. As per the complaint by US Department of Justice, “Unbound by any market check on pricing due to its payment of illegal kickbacks, Teva left American taxpayers to shoulder the high prices that Teva set for Copaxone, while Teva reaped for itself the resulting profits.” Teva’s bonds were trading in the red with its 4.5% EUR and 6.75% USD bonds due 2025 and 2028 trading at 101.2 and 110.5, down ~2 and 4 points respectively over the past week on the secondary markets. 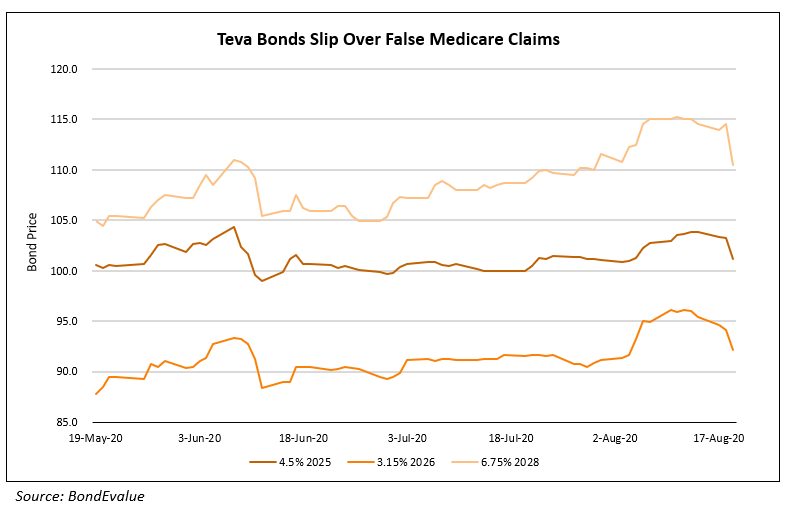 New Curbs on Huawei Could Force it to Relinquish No. 1 Smartphone Maker Spot

The Trump administration on Monday announced a new set of restrictions on the sale of US-made chip-sets to Huawei on accusations of technology theft and breach of sanctions. The US also urged its allies to refrain from using equipment provided by Huawei. The expanded sanctions announced by the US Commerce Secretary require companies to obtain a licence before selling any microchip made using US equipment or software to Huawei and it encompasses cases where Huawei is an intermediate supplier too. The new curbs could have an adverse effect on the the tech giant’s handset business as well as its 5G business as it severely restrict Huawei’s access to off-the-shelf chip-sets and could potentially force it to relinquish its No. 1 position. While chip-set makers including Samsung Electronics, MediaTek, Sunny Optical and AAC Technologies stand to lose in the short run, Huawei’s competitors including Samsung Mobiles, Xiaomi Oppo and Vivo could gain out of Huwai’s pain. “Huawei currently has 45-50% market share in China and, if this becomes vulnerable, Xiaomi, along with Oppo and Vivo, are likely to be the biggest beneficiaries,” JP Morgan analyst Gokul Hariharan said, referring to Chinese smartphone makers. Huawei’s HiSilicon division has relied on US companies including Synopsis to design its chips. This could lead to Huawei stopping manufacturing of its Kirin chipset due to US pressure on its suppliers. Even the outsourced production to a Taiwanese contract chip-maker would not work with the new restrictions since the outsourced company uses equipment from US companies. “The US government has passed a death sentence on Huawei,” said Dan Wang, an analyst at Gavekal Research. “Huawei is probably finished as a maker of 5G network equipment and smartphones once its inventories run out early next year.”

Earlier in the month, the Trump administration had targeted Chinese companies listed in the US by recommending a ban on foreign companies that violated the US accounting standards. A forced delisting from the US markets potentially shuts a funding channel for the company being delisted and is seen as a potential credit issue by the rating agencies. However, as per a report by S&P, which rates seven Chinese issuers listed in the US, most of the issuers have alternate share-listing options that limits their liquidity risk or requirement of increased leverage. Out of the seven companies covered by S&P, only 21 Vianet Group is vulnerable to a default trigger in case of an accelerated payment due to its exposure to the dollar debt. According to the rating agency, companies with lower ratings and that are not listed on other exchanges are more exposed to the delisting and that Chinese firms have sufficient time to pursue listings outside the US if needed. The Chinese companies in question have already raised $15bn via IPOs and secondary listings on Shanghai’s Star Market, China’s equivalent of Nasdaq. Some Chinese companies are considering a secondary listing on Hong Kong’s HKEX, which could be a beneficiary of the potential de-list according to a Citigroup research. The listing could push Hong Kong and Shanghai past Nasdaq this year for the global fundraising crown, as the Ant offering is expected to surpass Saudi Aramco’s $29.44bn listing last year as the world’s largest IPO.

A special purpose acquisition company (SPAC) is an entity that has been established for the sole purpose of raising capital via an initial public offering (IPO). The funds raised by the SPAC are to be used towards acquiring one or more unspecified businesses. Since the acquisition targets are identified after the IPO, SPACs are also known as “blank cheque companies”. SPACs are typically formed by founders that have a credible track record of identifying attractive companies to acquire. The prospectuses for SPAC IPOs typically focus on the founders since there is no company history or financial performance. The funds raised via an IPO are held in trust till the management can identify an acquisition target.

SPACs have become increasingly popular, with Airbnb and Uber investor Kevin Hartz joining the list of investors to launch SPACs. Hartz raised $200mn via his SPAC “one” that listed on the NYSE on Tuesday. He told the FT, “Just as we saw in the ’70s and ’80s, venture capital start to grow and in the ’90s really take off, we see the same with Spacs. It’s the time and the place for Spacs.” As per Refinitiv data, SPACs have collectively raised $27.5bn via US IPOs this year.

On the risk of rising real rates to China’s recovery – in a report by Shaun Roache and Vishrut Rana, S&P economists

“A climb in real interest rates may throw China’s recovery off course just as it should be gathering steam.” “But until China’s consumers start spending and private firms pick up investment, it’s too early to say the recovery is self-sustaining and can live with much less stimulus, including higher real interest rates.”

On the appeal of income funds for aging Asian investors

“With Asia recovering first from the virus, the popularity of Asia fixed-income funds is rising,” said Ng. “The top-selling funds in Hong Kong now all have regular monthly payouts. Because of the low interest rate environment, if you put your money in a savings account, you’re basically getting nothing.”

On bond traders betting on Argentina’s next default

“These restructurings – some people look at them as the end,” said Koenigsberger. “I look at it as the beginning of a new cycle, and that cycle is typically very virtuous and we hope to be a part of that. So yes, it was absolutely worth it.”

“We’ve had so many hopes over the years,” said Rhodes. “But if they don’t implement the structural reforms they promise and they don’t reinforce the institutions that count and create confidence in the population, it isn’t going to work. And that’s been the history of nine defaults.” 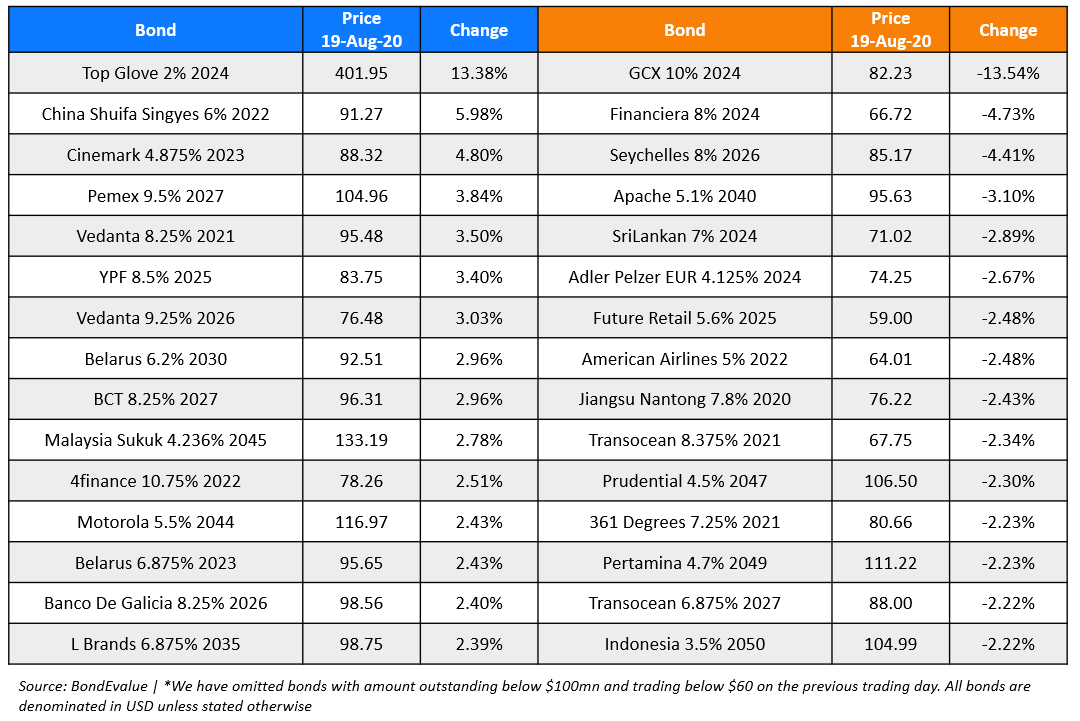