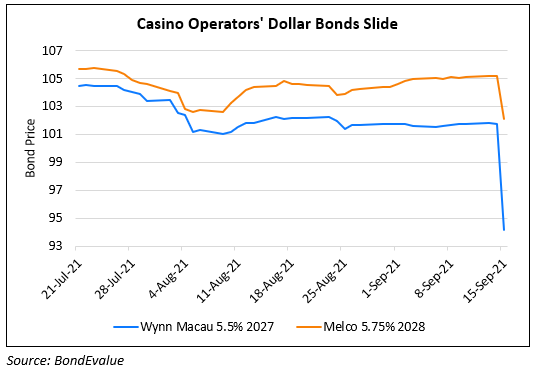 Dollar bonds of Wynn Macau, Melco’s and Sands China fell dropped ~5 points, 3 points and 1 point respectively yesterday after Macau officials said they would change casino regulations to tighten restrictions on operators, including appointing government representatives to supervise companies in Macau. Officials would begin a 45-day public consultation period on September 15 to discuss the legal revisions. Topics covered include: how many licenses (concessions) will be allowed, duration of their terms, the level of government supervision and a proposal to increase local shareholdings of casino companies. “The casino issues are a continuation of what’s been a pretty big crackdown…There’s a debate over whether China is even investable right now. You never like to see increased regulation, increased taxes, restrained movement. That all seems to be the status quo.” said Jason Ader, CEO of NYC-based investment manager SpringOwl Asset Management and a former Las Vegas Sands Corp. board member. The move by Beijing Beijing is another step in its crackdown on business and society that initially focused on tech giants, video-game use and after-school tutoring.