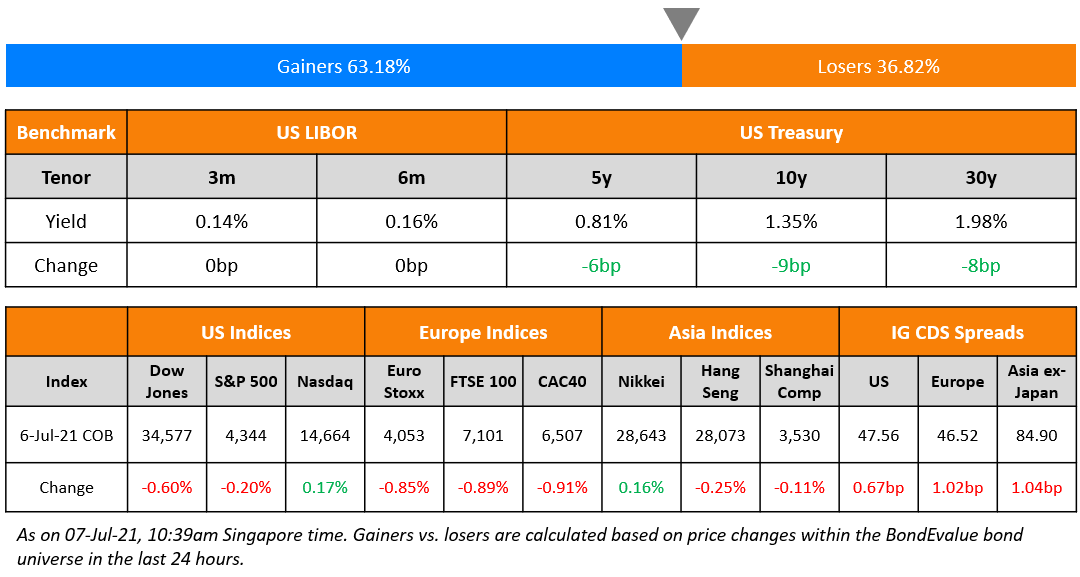 US Markets were mixed as the S&P was down 0.2%, snapping its 7-day winning streak while NASDAQ, was up 0.2%, at a new record. The June ISM Services index in the US dropped to 60.1 from May’s record high of 64.0 and lower than the forecasted 63.5. US business output continued to expand at the third-fastest rate since October 2009. Real Estate, Consumer Discretionary and IT were up 0.9%, 0.8% and 0.4%, pulling the bourses up while Energy, Financials and Materials down 3.2%, 1.6% and 1.4% pushed them lower. US 10Y Treasury yields dipped 9bp to a four month low of 1.35%. Eurostat eurozone retail sales rose by more than expected in May. However, German economic sentiment hit its lowest since January, with the ZEW survey at 63.3 in July, lower than the forecasted 75.2. European markets slid across – DAX, FTSE and CAC were down ~1.0%. US IG and HY CDS spreads widened 0.7bp and 4.3bp respectively.  EU main and crossover CDS widened 1bp and 6.6bp respectively. Saudi TASI and Abu Dhabi’s ADX were down 0.3% and 0.2% respectively. Brazil’s Bovespa was down 1.4% higher. Asian markets opened in the red – HSI, Singapore’s STI and Nikkei were down 1.1%, 0.9% and 0.8% while Shanghai was largely flat. Asia ex-Japan CDS spreads were 1bp wider. Chinese property developers’ bonds, including Evergrande, Risesun, Kaisa and Sunac witnessed a sharp fall late on Tuesday. Sri Lanka’s bonds also made it to the losers list on the overall risk-off sentiment. REC raised $400mn via a 5.5Y bond at a yield of 2.771%, 32.5bp inside initial guidance of T+225bp. The bonds have expected ratings of Baa3/BBB-. Proceeds will be used to finance power projects. There is a change of control put at 100 if the Indian government or a government entity ceases to own, directly or indirectly, more than 50% of the voting rights of the company. REC in February issued a $500mn 2.25% bond due 2026, its eighth issuance in the international bond markets, at a yield of 2.303%. The new bonds were priced at a new issue premium of 16bp over their existing 2.25% bonds due September 2026 that yield 2.61%.

Mexico raised €1.25bn ($1.48bn) via 15Y social bond at a yield of 2.259%, 25bp inside initial guidance of Mid-Swaps+220bp area. The bonds have expected ratings of Baa1/BBB/BBB-. Proceeds will be used for general sovereign financing and on budgetary resources to fund budgetary programs that qualify as eligible Sustainable Development Goals (SDG) expenditures under the SDG Sovereign Bond Framework.

Sharjah raised $750mn via a 10Y Sukuk at a yield of 3.2%, 30bp inside initial guidance of 3.5% area. The bonds have expected ratings of Baa3/BBB-. This is Sharjah’s second offering this year following their $1.25bn two-trancher comprising a 12Y and 30Y bond in March. Proceeds will be used to plug its deficit projected to edge down slightly to $2.04bn in 2021 from $2.12bn last year.

Sino-Ocean Group raised $320mn via a 3.5Y green bond at a yield of 2.7%, 35bp inside initial guidance of T+270bp area. The notes have expected ratings of Baa3/BBB– and received orders of over $1.5bn, 4.7x the issue size. Sino-Ocean Land Treasure IV is the issuer and Sino-Ocean Group is the guarantor. Proceeds will be used to repay mid to long-term external debt of the guarantor and/or its subsidiaries due within one year, in accordance with a green finance framework. The bonds were priced just inside its 6% bonds due July 2024 that yield 2.74% in secondary markets.

Minerva raised $400mn via a tap of their 4.75% 2031s at a yield of 4.75% as compared to initial guidance in the high 4% area. The bonds are rated BB/BB. Proceeds will be used to prepay existing debt and the issuance is part of liability management efforts aimed at stretching its debt profile. The tap was priced 32bp over its initial 4.75% 2031s that yield 4.43%.

Hyundai Assan Otomotiv Sanayi raised $300mn via a 5Y bond at a yield of 1.709%, 30bp inside initial guidance of T+115bp area. The bonds have expected ratings of Baa1/BBB+ and received orders over $1.15bn, 3.8x issue size. Proceeds will be used for general corporate purposes. The bonds are guaranteed by Hyundai Motor Corp. Asia took 95% and EMEA 5%. Asset/fund managers bought 50%, banks 26%, insurers/sovereigns/supranationals and agencies/sovereign wealth funds 22% and private banks 2%.

Nomura raised $3.25bn via a three-trancher. It raised:

Tapering refers to the unwinding of a quantitative easing program by central banks. Tapering involves a reduction in bond purchases by central banks towards zero purchases over time. The Fed’s minutes due later today may offer clues on the central bank’s QE tapering discussion according to Reuters. “The minutes will certainly be interesting…The market is going to be looking at any details about the appetite to discuss the timing of when it’s appropriate to start tapering”, said Sam Bullard, senior economist at Wells Fargo.

On Post Pandemic Credit Markets
Phil Brendel, Bloomberg Intelligence
“The market will shift from pricing on projections and start looking more at actuals,”; “We’re at credit bubble levels of distressed debt. So credit markets are vulnerable to a significant correction.”

Aaron Javian, a partner at law firm Reed Smith
“The confluence of liquidity, reemerging economic activity and continued patience on the part of the creditor community has resulted in a lull in bankruptcy filings,”; “The willingness of new lenders to lend into distressed situations has enabled companies to kick the can down the road a ways,”

“Our EU Green Bond Standard proposal will set a gold standard in the market, and responds to the needs of investors for a trusted, robust tool when investing sustainably,”
On Recovery of Global Sukuk Recovery
Mohamed Damak, S&P Global Ratings credit analyst
“We expect sukuk issuance will reach $140 billion-$155 billion in 2021, compared with $139.8 billion in 2020. In first half of 2021, sukuk issuance totalled $90.6 billion, compared with $86.4 billion at June 30, 2020, thanks to Malaysian and Saudi Arabian issuances,”; “By contrast, we saw a 50 per cent drop in sukuk issuance in the UAE due to the adoption of the Accounting and Auditing Organisation for Islamic Financial Institutions’ Shariah Standard 59… In our view, investors are also now more exposed to residual asset risks,”; “More broadly, downside risks for the sukuk market remain but they are slowly shifting toward traditional factors such as geopolitical concerns and oil price fluctuations. Notably, the evolution of the pandemic also remains a relevant concern,”

“Financial advisers follow asset allocation models and portfolio rebalancing and demographics are strong trends,” said Shelly Antoniewicz, ICI senior director of financial and industry research. “The cumulative flow to bond funds lines up nicely with the percentage of the population over 65 years.”

David Marsh, chairman of the Official Monetary and Financial Institutions Forum in London
“This is really quite a key moment. They can’t get this strategy review done without full agreement by the Governing Council,”; “This does give some people blocking power. Vetoes have to be used very carefully.”

David Powell, Bloomberg Economics
“The ECB is relatively isolated in seeking inflation of less than 2%. Only one other central bank of an advanced economy does the same — the Swiss National Bank.” 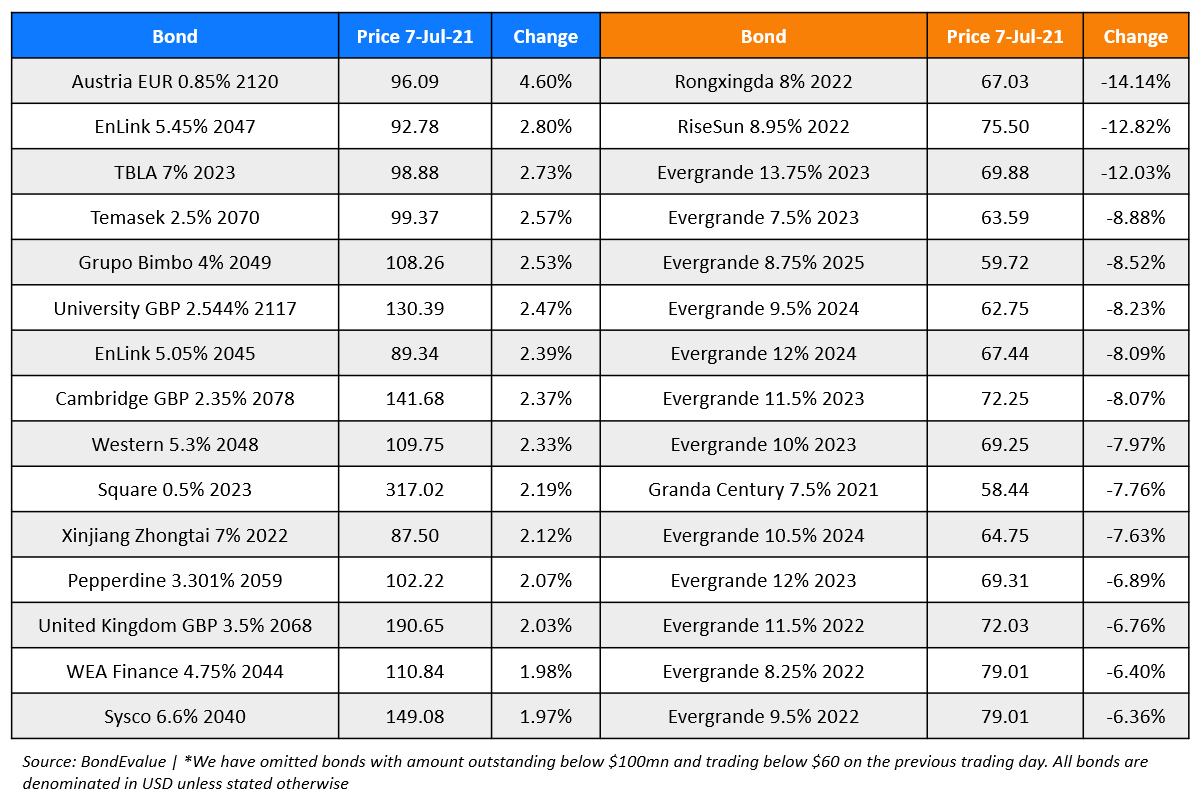